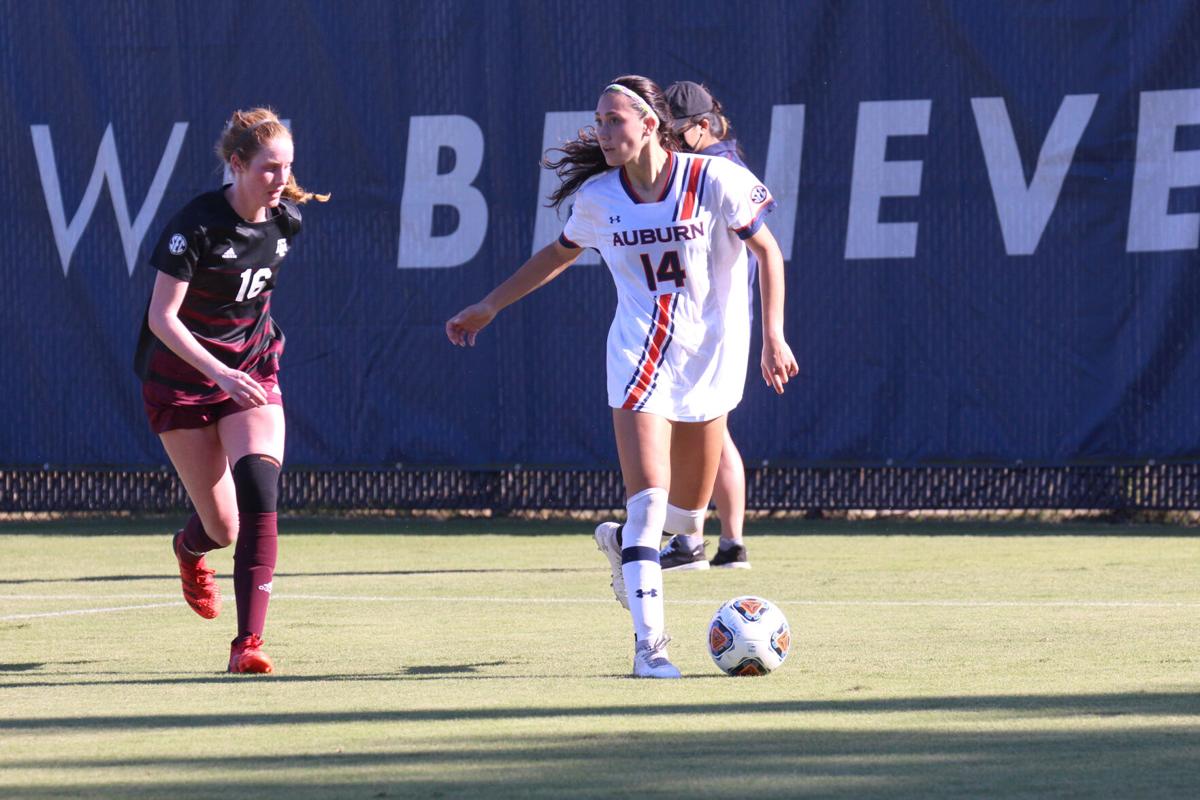 Auburn’s Sydney Richards dribbles with the ball during Auburn soccer’s game against Texas A&M on Sunday at the Auburn Soccer Complex. 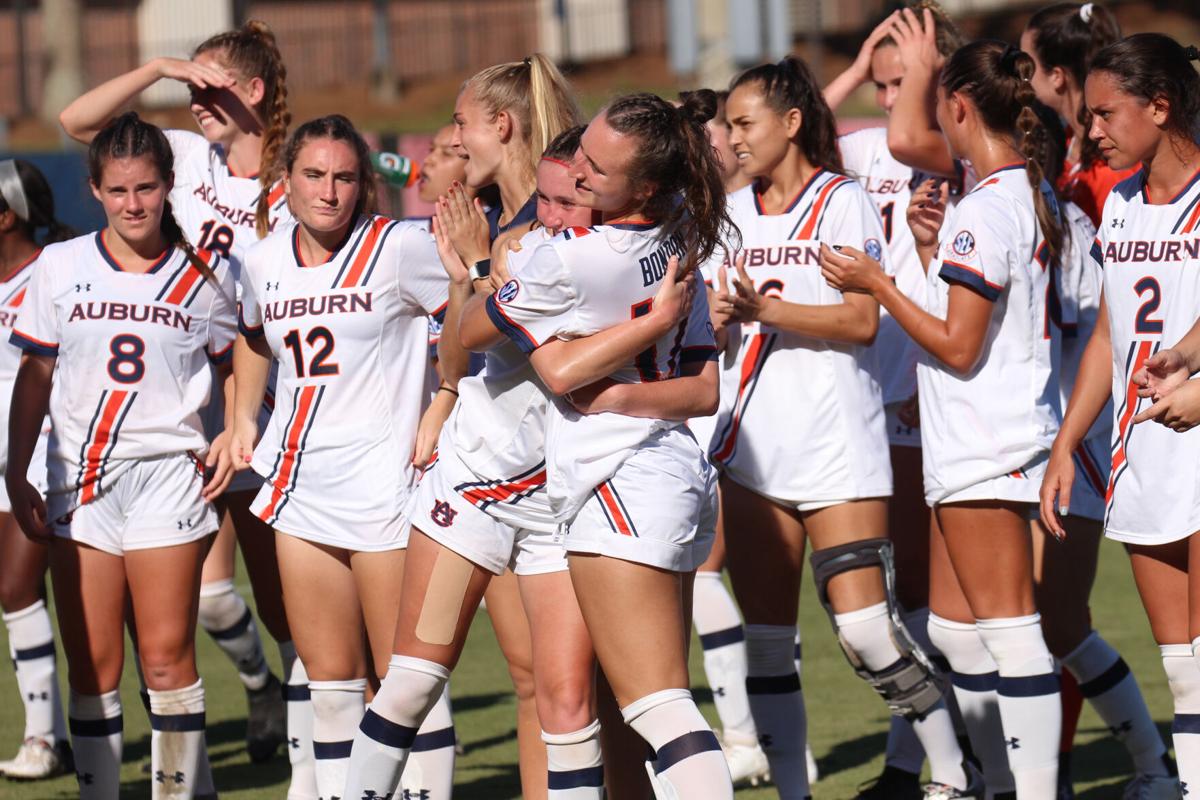 Two freshmen created penalty-kick opportunities for Auburn then two veterans buried them in the back of the net Sunday as the No. 11 Auburn soccer team cruised to a 3-0 win over Texas A&M.

The Tigers moved to 8-2-0 on the season and 2-1 in the SEC, bouncing back from a stinging loss at Tennessee on Friday.

Freshman Carly Thatcher was fouled in the box in the first half and Sydney Richards converted that penalty kick into a goal, before fellow rookie Sydnie Thibodaux drew a foul going the other way in the second half leading Anna Haddock to score on the other penalty kick.

Auburn’s first goal in the 20th minute came by way of an error by the Aggies when M.E. Craven lofted a pass into the box from across the midfield line, which sailed over Auburn’s attackers but was misjudged by the Texas A&M keeper as it bounced over her head and rolled into the net.

“I tell the team: Create your own luck,” Auburn head coach Karen Hoppa said after the victory. “We played really well, we got the ball in the box. We created those opportunities by being dangerous on offense.”

Haddock scored her eighth goal of the season. Richards scored her third. Auburn’s defense did not allow a shot on goal for Texas A&M.

Texas A&M fell to 5-1-1 on the season and 1-2 in SEC play while Auburn got back on the winning side.

The win snaps a three-game losing streak for Auburn to Texas A&M. Auburn’s last win over the Aggies before Sunday came on Sept. 15, 2017.

“My first thought was just that we needed to get ahead of them because they’re obviously a really great team, also in the West division,” Richards said. “So honestly it was just good to get on top of them and stay on top of them.”

Auburn on Friday led Tennessee late in the second half before the Lady Vols scored in the 86th minute to tie the game 1-1, then scored in the overtime winner in the 100th minute.

“Obviously we were disappointed with a heartbreaking loss in Knoxville,” Hoppa said. “To be fair, I thought we could have played better at Tennessee. We didn’t play our best game. But the response that we had today was just outstanding.

“I’m really proud of my team,” she said on the field after Auburn’s bounce-back against Texas A&M. “I thought we played some great soccer. We fixed some problems that we had in Knoxville. Obviously we created a ton of offense and then our defense, giving up zero shots on goal to a very good A&M team, that was just an outstanding overall performance.”

Auburn has roared up the national rankings this season after winning its first six games to open the schedule, including a home victory over ranked BYU. Auburn’s only loss this season was to No. 1 Florida State before Friday’s loss on the road at Tennessee.

“I told the team, for us, as a really good team trying to get to a great team, that’s the next progression. We’ve got to be able to close out,” Hoppa said. “It was the 86th minute when Tennessee tied it up, and we just missed one defensive play. And that’s the next step for our team, to be able to do that.”

Auburn will hit the road again for its next two games, playing at South Carolina on Oct. 1 then at Mississippi State on Oct. 7 before returning home to host LSU on Oct. 10.

“Obviously that was a tough loss,” Richards said of the Tennessee game, “but we’ve got to just persevere and know that we’ve got to keep moving on. This was just a really great win for us and for us to keep going forward and build off of.”

Auburn’s Sydney Richards dribbles with the ball during Auburn soccer’s game against Texas A&M on Sunday at the Auburn Soccer Complex.