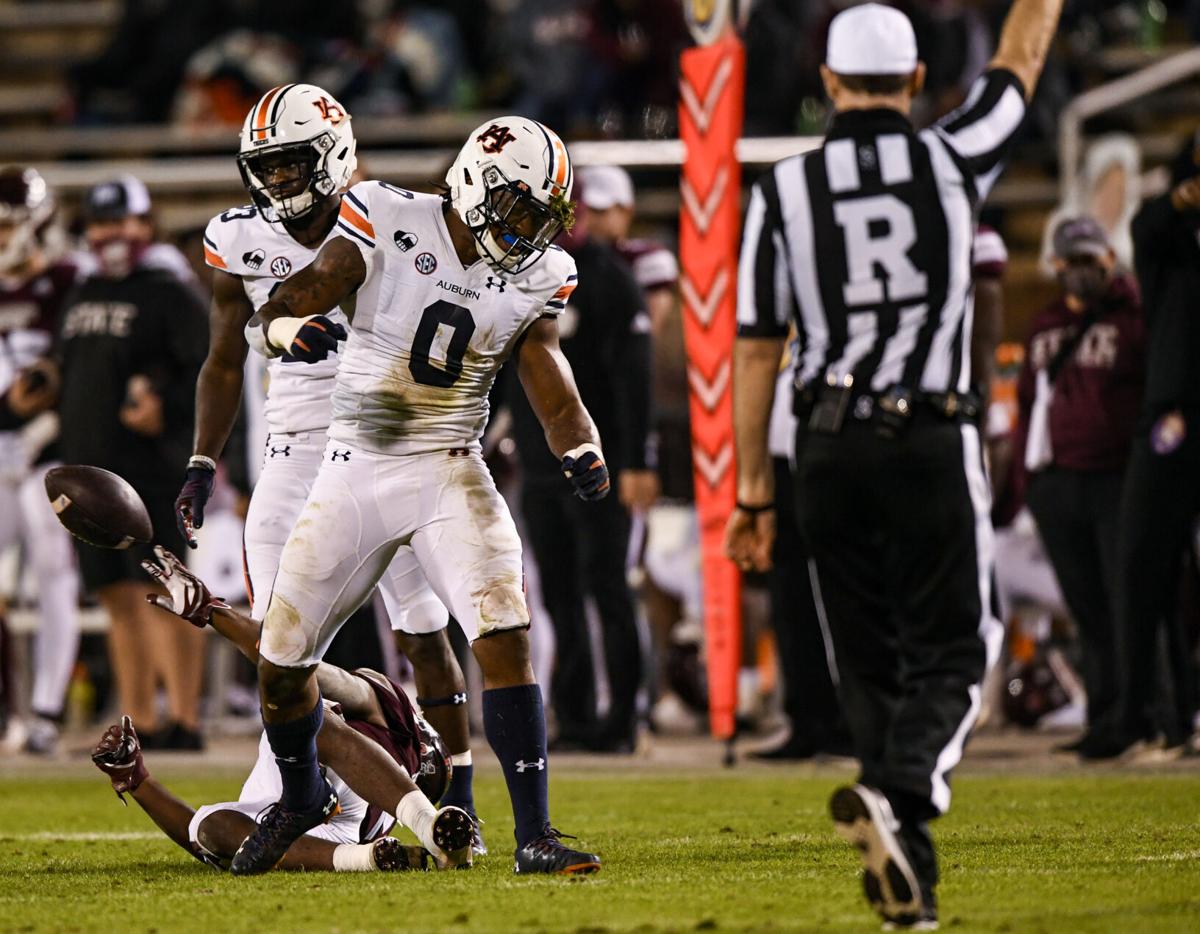 Owen Pappoe (0) reacts after play during the game between Auburn and Mississippi State last December at Davis Wade Stadium.

BIRMINGHAM — To say Auburn linebacker Owen Pappoe had a lot on his plate in 2020 was an understatement.

Pappoe already faced great expectations before his sophomore season, but the attention and the workload only grew after senior linebacker KJ Britt suffered a season-ending injury in the second game of the season. Britt’s exit coupled with senior Chandler Wooten’s preseason decision to opt out put the onus almost entirely on Pappoe and junior Zakoby McClain, who both met the challenge and combined for 206 tackles last fall.

Now, with his junior season quickly approaching, Pappoe has a newfound sense of self-assurance.

“I actually was talking to my dad about this earlier this week: It’s just finally found that confidence that I needed to go out there and make plays,” Pappoe said on Thursday at SEC Media Days. “I feel my confidence is through the roof. I feel really it’s a different energy coming in this off-season from preparation, film study, and all that.

“I’m really excited to see what happens this season, and I feel really good about it.”

Pappoe’s confidence was evident going back to Auburn’s coaching change this offseason.

Bryan Harsin told reporters Thursday that Pappoe was one of the first players to meet him once he got to Auburn and settled in as the Tigers’ new head coach. Harsin said he was immediately struck by Pappoe’s professionalism, and the moment demonstrated to Harsin the type of leader he had on the Tigers’ defense.

“Guys respect him. He does things right,” Harsin said. “I’m excited about Owen. Owen’s a guy that I have tremendous respect for. If anybody is going to represent our program, Owen Pappoe is going to be one of them. He’ll do a great job today [at Media Days]. He’ll answer honestly. He’s a good man and he’s going to be a hell of a player for us this year, there’s no doubt about it.

“He’s one of the reasons why I feel like our team has made the decision to continue to keep improving and growing and doing the things we’re asking them to do because we’ve got some leadership on our team from guys like him.”

Pappoe’s boost in confidence might also come from his conditioning work.

Harsin said Pappoe has been incredible in the weight room, in running and some of the testing the new Tigers’ staff has done, which matches what Pappoe shared during the spring. The linebacker was practically giddy when discussing new strength coach Jeff Pitman’s plan and added that the Tigers would look like Marines by the time the fall arrived.

Now, with the start of the season in sight, Pappoe explained the Tigers haven’t let up since those winter and spring workouts.

“I think we’re one of the hardest-working teams in the country. I love what Coach Pit has done with us,” Pappoe said. “Everybody feels strong. Everybody feels healthy. We had testing not too long ago. People putting up freak numbers, had a little combine going.

“It’s really going to help us out this season. We’re going to be feeling strong, feeling good all the way through.”

The good news for Pappoe is he’ll have much more help on hand among the linebackers this fall. McClain is back for his senior season along with Wooten, who is using his remaining year of eligibility, and sophomores Wesley Steiner and Cam Riley.

Pappoe shined last season and put himself in position to potentially be named a preseason All-SEC linebacker on Friday. Whether Pappoe earns that accolade or not — neither he nor McClain were chosen for the in-season award in 2020 — he’ll remain eager to turn his confidence into tangible results for the Tigers.

“I’m excited for all the fans to be back in the stadium,” Pappoe said. “COVID hitting last year, a lot of things changing, a lot of different restrictions, but everything’s getting closer to getting back to normal. I’m really excited about this season.”

Auburn head coach Bryan Harsin said on Thursday roughly 60 percent of the Tigers football team has received the vaccination for the coronavirus.

Owen Pappoe (0) reacts after play during the game between Auburn and Mississippi State last December at Davis Wade Stadium.