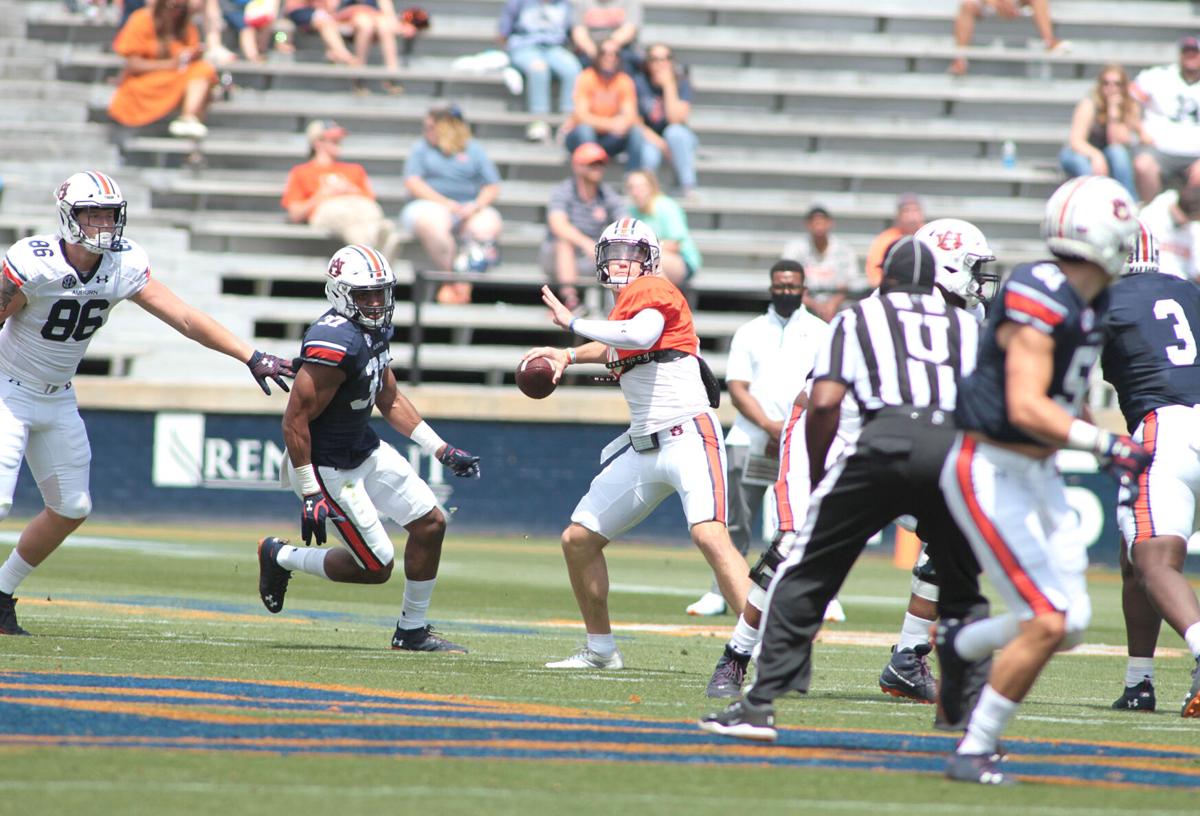 Auburn quarterback Bo Nix (10) fires a pass during the A-Day game on Saturday at Jordan-Hare Stadium. 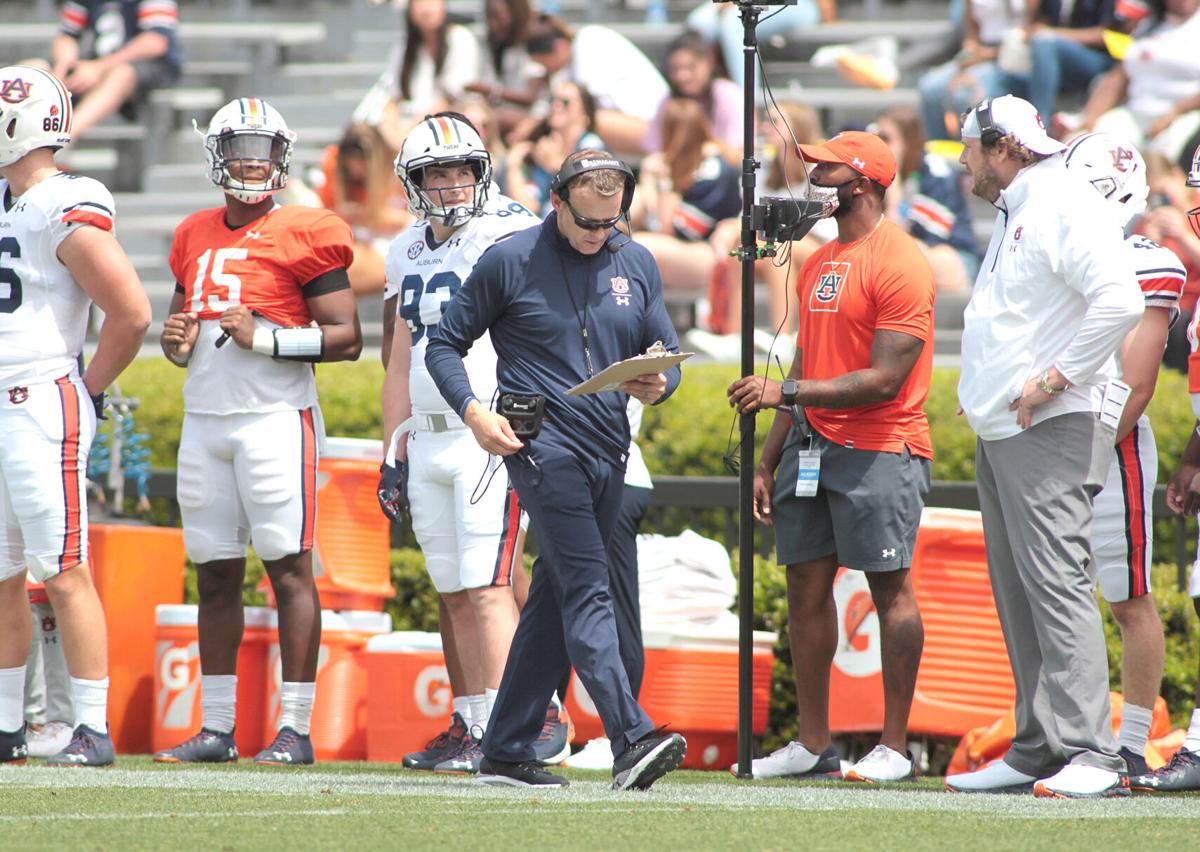 On third down and goal to go, Bo Nix rolled to his right and fired to the back of the end zone, threading the needle with a pass that zipped between defenders and right into the hands of Elijah Canion for the touchdown.

Canion threw his hands up to pump up the crowd. The fans cheered. It was a highlight play worth a roaring applause.

And it sounded a little more like it, too.

“It reminded me of how it should be here in Jordan-Hare Stadium,” Nix said, thinking of the fans at Auburn’s A-Day scrimmage. “Looking forward to fall, for sure.”

Auburn welcomed the most fans it’s had since 2019 at the A-Day game on Saturday, and the players offered a few exciting moments like that one for the fans who came to check out a sneak peak at the new-look Tigers team under new coach Bryan Harsin.

Tank Bigsby broke loose for a 46-yard touchdown run to bring fans to their feet earlier in the scrimmage. Nix’s touchdown pass to Canion came with just 24 seconds left in the first half. At the end, Team Auburn topped Team Tigers 17-3, with Anders Carlson booting through field goals for both teams.

Most importantly, though, the team got through the day without any major injuries — and took one step closer to the real thing in the fall.

Auburn will wrap up spring camp with one last practice Monday before the team turns its focus to the summer.

“There’s plenty of things that we did do well today, as far as stuff the coaches have been hitting and emphasizing with each group and each unit — and some things we’ve got to work on, which is great,” Harsin said.

Nix finished 12-of-20 with 112 passing yards and that touchdown toss to Canion. Bigsby rushed for 64 yards and a score on seven carries.

Canion finished with a team-high six catches for 51 yards and the touchdown.

Defensively, Zakobly McClain led the way with five total tackles, including one recorded for loss.

Aside from the first-teamers, freshman quarterback and early enrollee Dematrius Davis impressed later in the scrimmage when he uncorked a 42-yard pass to Malcolm Johnson, Jr.

On the other side, Chandler Wooten stepped up for the defensive unit, though. The senior is getting back in the groove after opting out last fall while expecting a son in the middle of the pandemic. He tackled running back Jay Sharp on third down when Davis checked down to him on the ensuing set of downs, then on fourth down he broke up the Davis pass to force a defensive stop.

“Today the focus was coming out, operate and execute and seeing these guys just go out, play smart, play hard, have fun and just kind of who’s playing the game,” Harsin said. “The only way you get better is playing the game.”

The crowd did its part in that, Harsin said. The team had the opportunity to run its new offenses and defenses in a game-like atmosphere, and did well, he said.

“Just to be in a game-like atmosphere — we had TV timeouts, we had officials out there, we’ve got media on the sidelines,” Harsin said. “Just creating that environment, giving them a chance to get a taste of that as we move into that next phase and start getting ready for the summer.”

The Auburn baseball team has some work to do in order to make the SEC Tournament. The good news is it will have considerable say in if it happens thanks to its final SEC opponents.

The Tigers are turning their attention toward making an improbable run out of the play-in game at the SEC Tournament starting Tuesday, after closing the regular season with a 4-1 loss to LSU on Sunday.

Allen Greene: Auburn hopes to have full capacity at Jordan-Hare Stadium this fall

"Our hope, like everybody else in the country, is for full capacity. If we have to adjust down then we'll adjust down,"

Auburn pitcher Shelby Lowe has capped her stellar freshman season with high honors, after being named a second-team All-SEC selection on Tuesday.

“I hope that I can make some kind of impact on them and their lives as well as their children's. That's important to me.”

Auburn quarterback Bo Nix (10) fires a pass during the A-Day game on Saturday at Jordan-Hare Stadium.