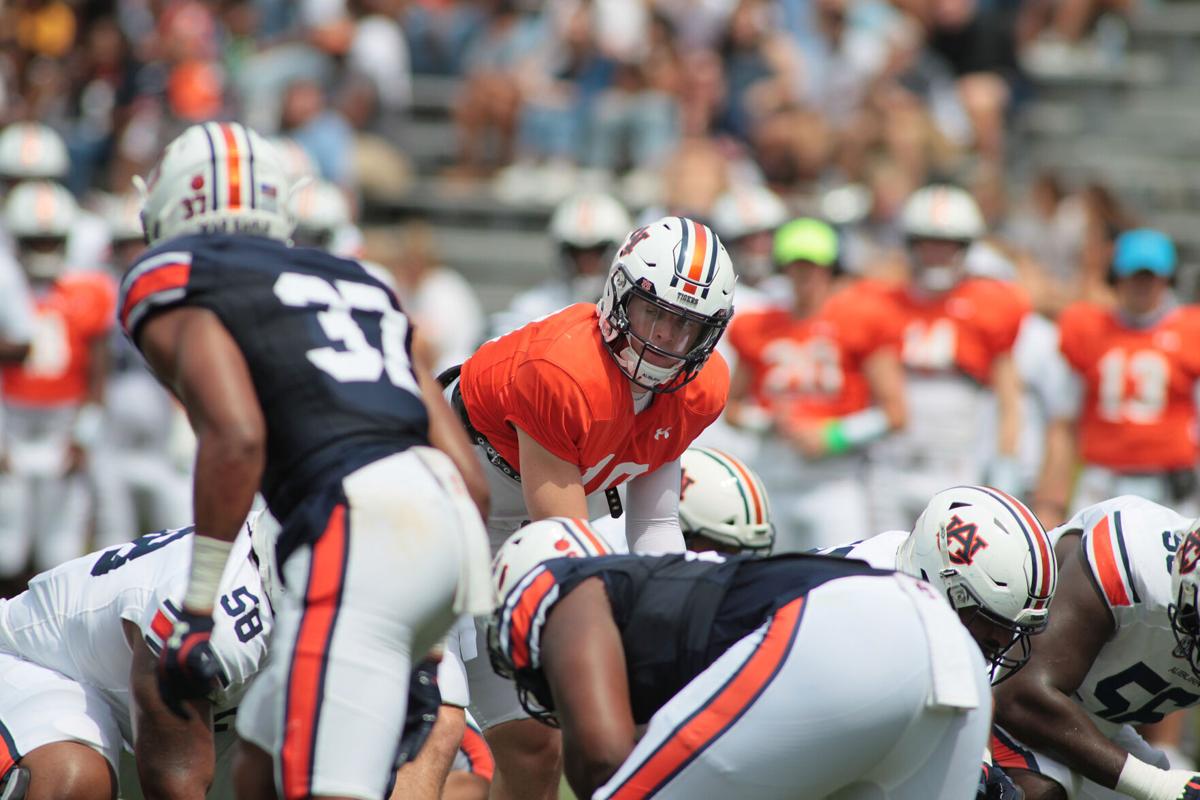 Auburn quarterback Bo Nix (10) lines up under center during the A-Day spring game on April 17 at Jordan-Hare Stadium. 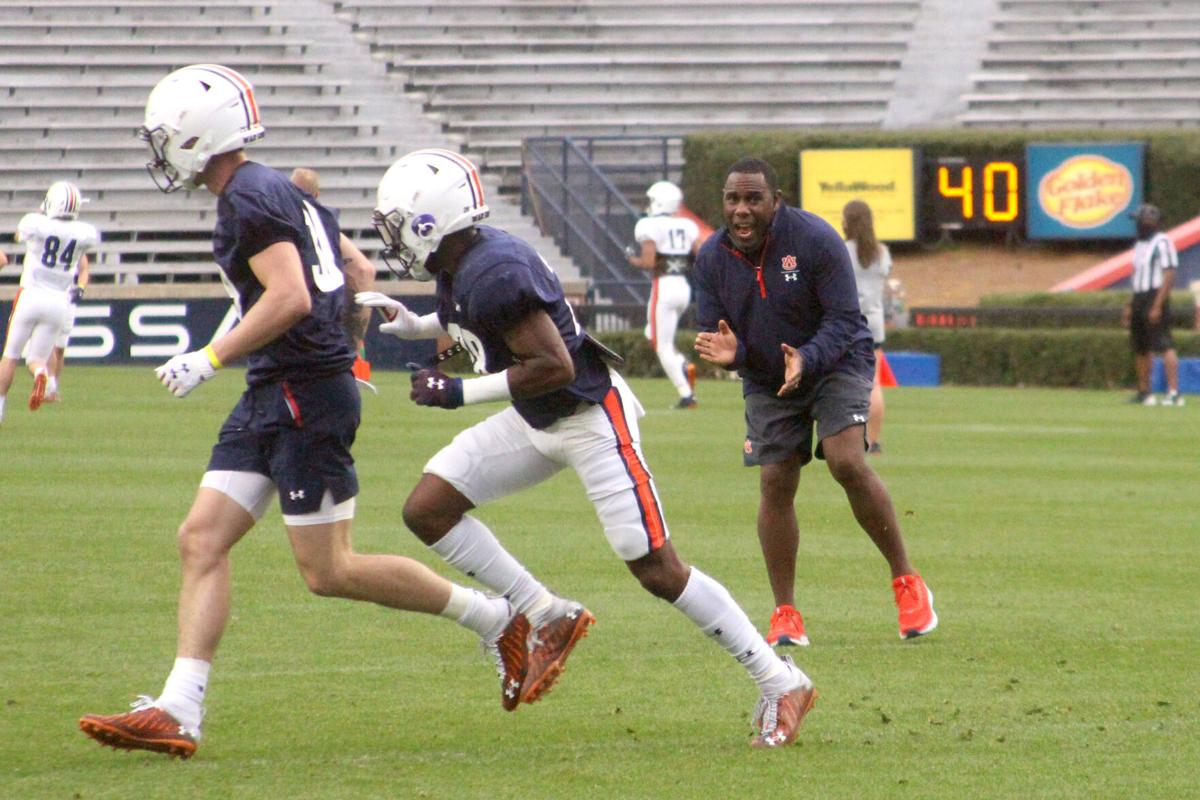 After a long offseason that saw a countless number of changes, the Auburn Tigers’ 2021 season is finally in sight.

The Tigers hit an important offseason milestone on Thursday, when the team meets in preparation for its first practice of fall camp on Friday. All eyes are on the Tigers as they prepare for their first season under new head coach Bryan Harsin, and there’s numerous areas of intrigue around the team as it gears up for the season opener on Sept. 4.

With camp now on the horizon, here’s a quick refresher on the biggest storylines surrounding the Tigers.

Auburn shook things up in December when it fired head coach Gus Malzahn after eight seasons and brought in Harsin after a successful seven-year run at Boise State, his alma mater.

Harsin’s hiring was one of multiple changes within the program, which included hiring an entire new staff outside of running backs coach Carnell “Cadillac” Williams. Some of the other notable adjustments included a new strength and conditioning program led by Jeff Pitman, formerly of Boise State; an offensive scheme that will see the quarterback under center much more than he was during the Malzahn era; and an all new defensive alignment (more on that in a bit).

Harsin was hired to make the Tigers a consistent national contender, something Malzahn was unable to sustain during his final three years at the helm. This camp will be important in determining how much progress Auburn makes on that front later this fall.

Junior quarterback Bo Nix returns for what would be his third year of starting behind center, but there is debate about whether Nix has a battle on his hands in the coming weeks.

Auburn added to its quarterback depth in May when the Tigers landed TJ Finley, who started five games at LSU during his true freshman season last fall.

The 6-foot-7, 246-pound Finley had his moments last season before being replaced by Max Johnson, and Auburn’s coaching staff overhaul means Nix isn’t guaranteed anything.

None of the new coaches would ever say a player has locked down his job before fall camp, but at this point it would be a surprise if Nix isn’t the starter come Game 1. That, of course, could change depending on how he and Finley perform over the course of 25 practices.

Who steps up at receiver?

The Tigers have lost their top three pass-catchers from 2020, with Seth Williams, Anthony Schwartz and Eli Stove all leaving for the NFL. The result is a receiver room that still has talent but little of it proven, which made for an interesting spring when several players did their best to stand out.

The spring saw some strong efforts from Elijah Canion and Ja’Varrius Johnson, and a room that includes Kobe Hudson and Ze’Vian Capers along with Georgia transfer Demetris Robertson doesn’t seem short of options. The question remains who becomes the most reliable option in the passing game — and who replaces Williams as Nix’s go-to guy.

That question may not be answered before Auburn takes on Akron, but we should have some more clarity in the next few weeks.

Harsin made a big move on the defensive front by hiring former Vanderbilt head coach Derek Mason as his defensive coordinator.

Mason’s arrival has meant some significant changes to the Tigers’ defense, which includes more three-man fronts and the use of the Edge position as opposed to the Buck linebacker used by former coordinator Kevin Steele. Those adjustments made for a busy spring, but some of the players like linebacker Owen Pappoe raved about the new scheme and what they’ll be able to accomplish in it.

Auburn’s defense took a step back in 2020 after losing considerable talent from the 2019 squad. The Tigers are in position to stand out defensively in Mason’s first season, but we’ll soon learn more about what the defense looks like and who does what and in which roles.

Mason is known for his work with secondaries over the years, and his first one with the Tigers is full of talent.

The only problem will be deciding who works best at each position.

Auburn already had a pair of proven veterans in cornerback Roger McCreary and safety Smoke Monday to go with a talented group of defensive backs that included Jaylin Simpson, Nehemiah Pritchett, Ladarius Tennison and Zion Puckett. The team then added transfers Dreshun Miller, Ro Torrence, Bydarrius Knighten and Donovan Kaufman into the mix this summer.

McCreary and Monday seem to be the only guaranteed starters at their current positions, and we may see Mason move players around — just like he did with Tennison during spring ball — as he determines the most effective lineup on the back end of the Tigers’ defense.

Suni Lee has another award to go on her trophy shelf.

Given how common it’s become for recruits to sign in December, next Wednesday will be important for Bryan Harsin as he looks to lay the foundation for the Auburn Tigers program.

Auburn quarterback Bo Nix (10) lines up under center during the A-Day spring game on April 17 at Jordan-Hare Stadium.