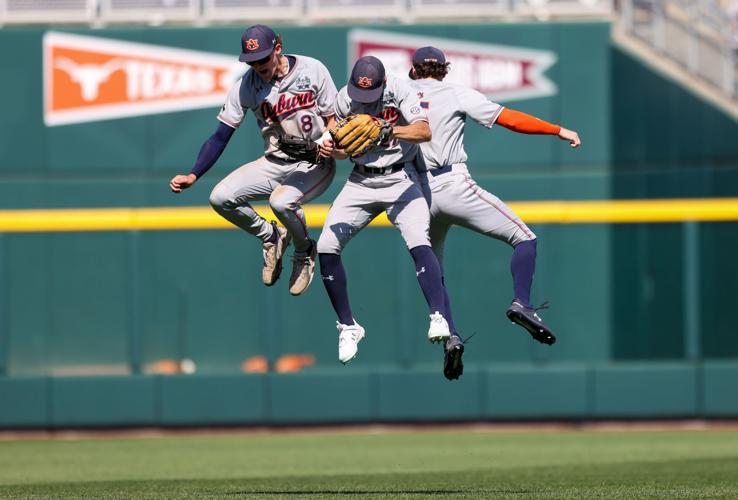 Auburn’s Bryson Ware, Bobby Peirce and Kason Howell jump to celebrate a win over Stanford in a College World Series game on Monday.

Auburn’s Bobby Peirce (27) scores a run in the sixth inning against Stanford on Monday in Omaha, Neb.

OMAHA, Neb. — Cole Foster blasted a go-ahead double off the left-center wall in the sixth inning, and Auburn baseball battled back to beat Stanford 6-2 and survive and advance at the College World Series.

Auburn trailed 2-0 when Foster ripped his two-out, three-RBI double to the fence, helping to give Auburn its first win on the grand stage in Omaha since 1997.

“An opportunity to compete against that program is a box that I get to check personally, but [for] our team, it’s a sense of accomplishment,” Auburn coach Butch Thompson said. “For our program, it’s not just a win. It’s important for us as we continue to try to build … a brand of respectability, sincere respectability with our program. So, it is a big deal and it gives us a chance to compete again.”

Auburn will advance to play at 6 p.m. Tuesday against the loser of Monday evening’s game between Arkansas and Ole Miss.

After scoring only one run in its first game in Omaha and staying scoreless through five, Auburn’s bats finally came alive in the sixth with Foster breaking the dam.

“We were battling, and obviously offensively we haven’t been where we want to be the last two, three games,” Auburn center fielder Kason Howell said. “But for Cole to really put a spark in our offense — I mean you could tell just everyone’s at-bats were just kind of — we were a little more on the attack after Cole’s big swing.”

Foster, who left Saturday’s game with symptoms of dehydration, was not available to speak with the media following Monday’s win due to continued illness and treatment.

“You can imagine he’s probably getting IVs, that’s what I was told, because he should be sitting here at the table visiting with us right now,” Thompson said of Foster. “He’s doing all he can. He barely pulled into second and dropped his head. One of the biggest hits of his life, [he’s] trying to keep his head up. He’s just done an amazing job.”

Foster’s bat had been quiet for much of this year’s NCAA Tournament. The Auburn second baseman had mostly fallen flat since his four-hit, three-home run game against Southeastern Louisiana in the Auburn Regional. Coming into Monday, he had four hits in his past six games, and had only reached base twice in his past three games.

But he came up big Monday in the clutch moment, representing how Auburn’s bats roared with the Tigers’ backs against the wall in the elimination game. Despite an explosive Auburn Regional that saw the Tigers average 17 runs and 16.3 hits per game, the Tigers were much more quiet in the Super Regional.

Auburn punched its ticket to Omaha with a 4-3 win that saw them record three hits, and the bats were even quieter in their first game of the College World Series, as they scored one run on four hits in a loss to Ole Miss.

Monday was different, however, as the Tigers recorded at least 10 hits for the first time since their June 11 game against Oregon State. Their six runs scored were also the first time they had more than five or more runs in their past four games.

Thompson said that his favorite offensive inning of the game was a scoreless fifth for Auburn.

“I was tired of watching us sit there,” Thompson said. “So we did some goofy stuff.”

With runners at first and second and no outs, Howell bunted to advance the runners, but his bunt went right back to Stanford pitcher Quinn Mathews, who threw to third for a force out. Then, with two outs and runners at the corners, Auburn ran a double steal that got Foster caught in a rundown between third base and home.

“It made me happy,” Thompson said. “It was goofy baseball, but we scored four runs the next inning and it seems like we got each other’s attention.”

On the mound, Trace Bright set a program record for strikeouts in a College World Series appearance with eight. The starter gave up a run in the first and second inning each before pitching three scoreless innings. Bright retired seven consecutive batters at one point.

Thompson said he gained more respect for Bright “today than ever” and that the starter was a batter away from exiting Monday’s game in the third inning. The starter said he improved on pitch location as his outing progrossed, which ultimately made the largest difference.

The Auburn bullpen was dominant again, as Tommy Sheehan pitched 1⅔ scoreless innings in relief of Bright. Blake Burkhalter struck out five in 2⅓ innings, tying a single-game high for the closer. Of his four appearances this postseason, Burkhalter has recorded 12 strikeouts.

For Stanford, it was its usual ace, Quinn Mathews, who Auburn got to for its lead. Coming into the day, Mathews had seven earned runs in his past 11 outings. The Tigers got him for six in three innings.

Thompson said Auburn watched “a lot” of video of Matthews coming into Monday, but he felt like their success against him was less a result of scouting them and more of their bats coming to life.

“That fifth inning just started up trying to do a little bit,” Thompson said. “I think that just got us wanting to go a little bit. And we knew we’d see him. We’d been watching video of him. That’s their guy.

“We knew if we had any chance of winning today we’d have to deal with him. And I thought we did a pretty good job.”

Adam has been covering Auburn athletics since March 2022. He graduated from the University of Missouri in May 2021 and has appeared in multiple publications, including the Kansas City Star and Omaha World-Herald, among others.

Karmello English became Auburn's second in-state commit in four days when he pledged to the Tigers on Monday.

Suni Lee could pick up another piece of hardware this month, as Auburn’s superstar gymnast has been nominated for two awards at the ESPYS.

Auburn’s Bryson Ware, Bobby Peirce and Kason Howell jump to celebrate a win over Stanford in a College World Series game on Monday.

Auburn’s Bobby Peirce (27) scores a run in the sixth inning against Stanford on Monday in Omaha, Neb.