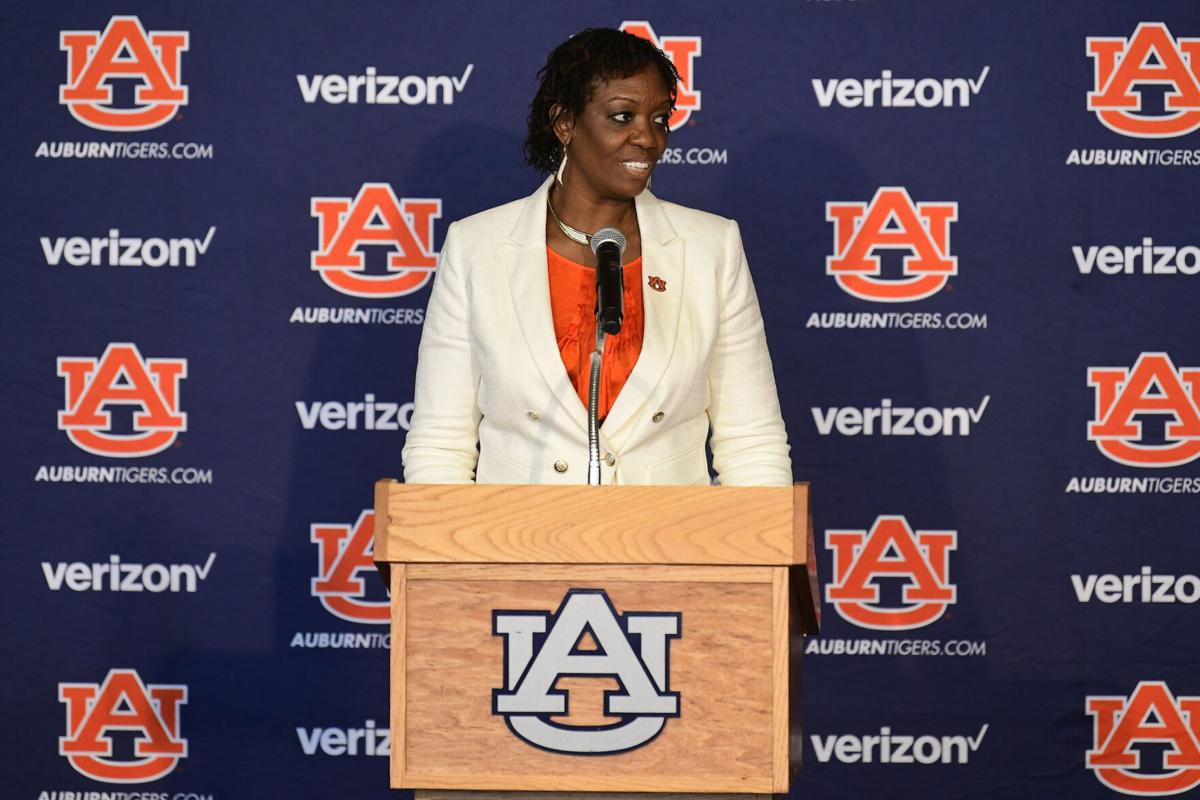 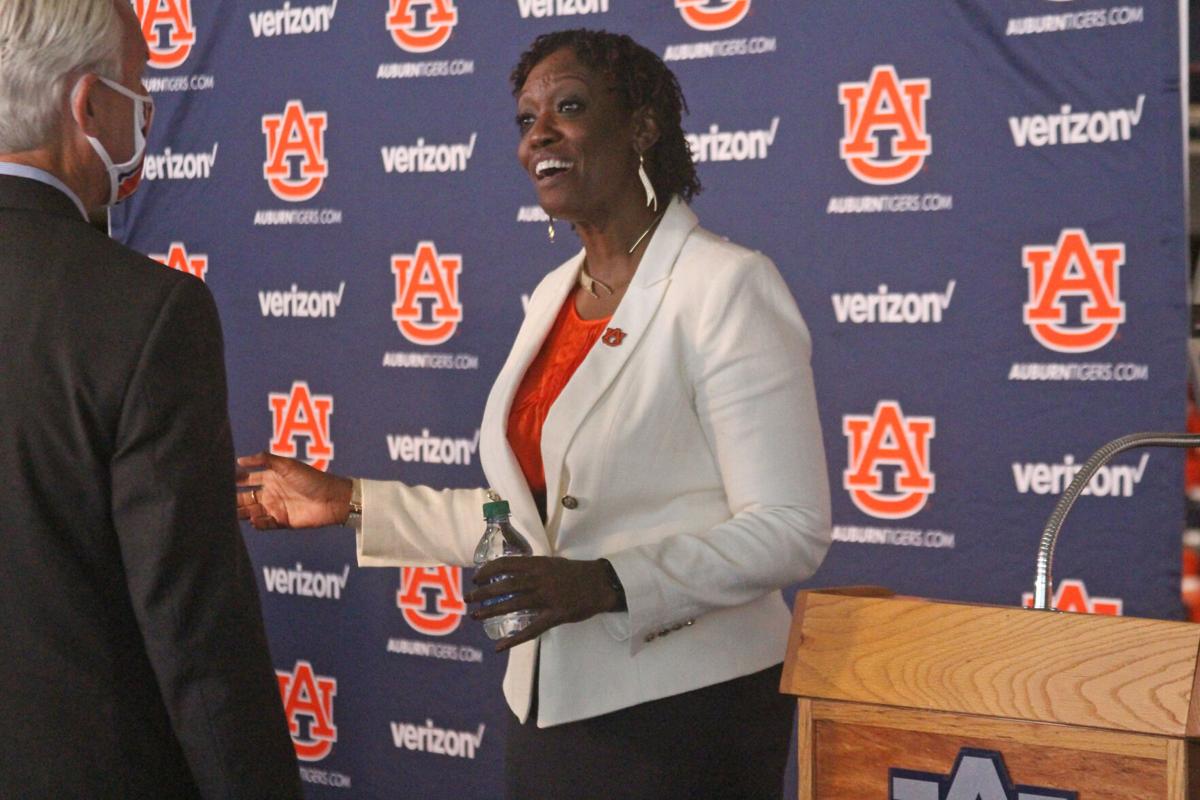 When Johnnie Harris walked over the court in Auburn Arena for the first time as head coach on Monday, she surely thought about the work that lies ahead.

She certainly looked up at the Final Four banners from 1988, 1989 and 1990, hanging proudly above the floor but hanging as out of reach as ever. She definitely gazed over the arena seats, with the hard truth being that lot of them will probably still be empty when tipoff comes in the fall.

It’ll be a challenge for Harris to build Auburn women’s basketball from something close to the ground up. But as she walked across the floor in the empty arena Monday, she could’ve thought about this, too:

She’s been here before.

Harris was a part of a big building effort at Texas A&M under Gary Blair before she was part of another building project at Mississippi State under Vic Schaefer — all leading to her first head coaching job at Auburn. She plans to take lessons learned there to build Auburn into a winner herself and bring the Tigers back to the NCAA Tournament.

Auburn athletics director Allen Greene called it “the blueprint” that day, at Harris’ introductory press conference in Auburn Arena. She was greeted at the arena entrance by Aubie and the cheerleaders and the marching band as the school rolled out the proverbial red carpet for her, and she met her players there seated, alongside the media as the spoke at the podium. It was likely later in the day when she took those contemplative steps over the basketball court, in a video released later by Auburn on social media.

Harris comes to Auburn as a first-time head coach — but as a proven recruiter in the SEC, and a coach who has learned under two of the league’s top women’s basketball coaches in recent years.

“She’s a competitor and has achieved and been a part of programs who have achieved a ton of success – not to set the bar too high, but success that we’re looking forward to as well. We would like to find ourselves not only in the NCAA Tournament but making deep runs,” Greene said. “She knows the blueprint, having worked with a number of successful coaches, and our job is to collectively help her put on some orange-and-blue tint on this blueprint and help make the young ladies in this audience, Coach J and her staff, and the Auburn Family very proud.”

Harris was an assistant alongside Schaefer and under Blair at Texas A&M from 2007-12 until she left with Schaefer to go to Mississippi State during his run as head coach there from 2012-20.

In both College Station and Starkville, Harris helped build a power.

She went to Starkville with Schaefer as his associate head coach, and was a part of successful build again. Mississippi State had only been to the Sweet Sixteen once in program history by the time they stepped on campus, then they took the Bulldogs to four straight Sweet Sixteens from 2016-19. She helped Mississippi State get to the Elite Eight for the first time in 2017, then get there two more times in 2018 and 2019. In 2017 and 2018, Mississippi State made its only-ever appearances at the Final Four and the national championship game.

Simply put, she’s helped take programs from next to nothing to the national championship game.

After following Schaefer to Texas for the 2020 season, Harris is striking out on her own to start her own project — just like when she and Schaefer struck out from Blair to do the same in 2012.

“I definitely was a part of that at Mississippi State,” Harris said. “Vic Schaefer had me right there with him when he was putting in the blueprint. So I had a big hand in that and I’m very comfortable doing that.

“It’s not even what I do or what we do — it’s who we are. So it’s definitely something that we’ll definitely put into play.”

She has that blueprint in hand. At the top of the page is hitting the recruiting trail hard, evaluating the players she has inherited and adapting schemes to their strengths, and trying to throw some things that are different at the coaches in the SEC — who she’s scouted against for years and knows well.

The end design, though, is as Greene described it: To ultimately, eventually, make it to the NCAA Tournament and make runs that can capture Auburn’s attention like never before.

She’s done it before.

“A lot of what I envision doing is what I’ve done with Coach Schaefer,” Harris said. “There are some tweaks that I would add to my program. For the most part, if it ain’t broke we don’t fix it.

“What Coach Schaefer and Coach Blair did was really good for us, so I will definitely be incorporating a lot of that.”

When it comes to the Auburn Tigers' offense this spring, it’s a whole new world for rising sophomore Luke Deal and his fellow tight ends.

Ketara Chapel has joined the Auburn women’s basketball staff as an assistant coach.

Jordan-Hare Stadium will operate at approximately 40% capacity for the A-Day game on Saturday.

Auburn rising sophomore tight end JJ Pegues is getting a chance to show what he can do on the other side of the ball.

"I’ll play whatever they tell me to play. ... I’m going to do it for the team just so we can get wins and whatever puts myself in a great situation to go to the next level."

Johnnie Harris has plucked Damitria Buchanan from Kansas to join her staff at Auburn.

Unique Thompson has found her opportunity in the WNBA.

"Just getting back into football, now, it's another thing on the plate. So it's been a transition for sure, but I'm very excited to be back."

Unique Thompson has fielded plenty of questions in the lead-up to Thursday’s WNBA Draft. She laughed as she thought about what might’ve been the hardest one: “Are you ready to be a city girl?”