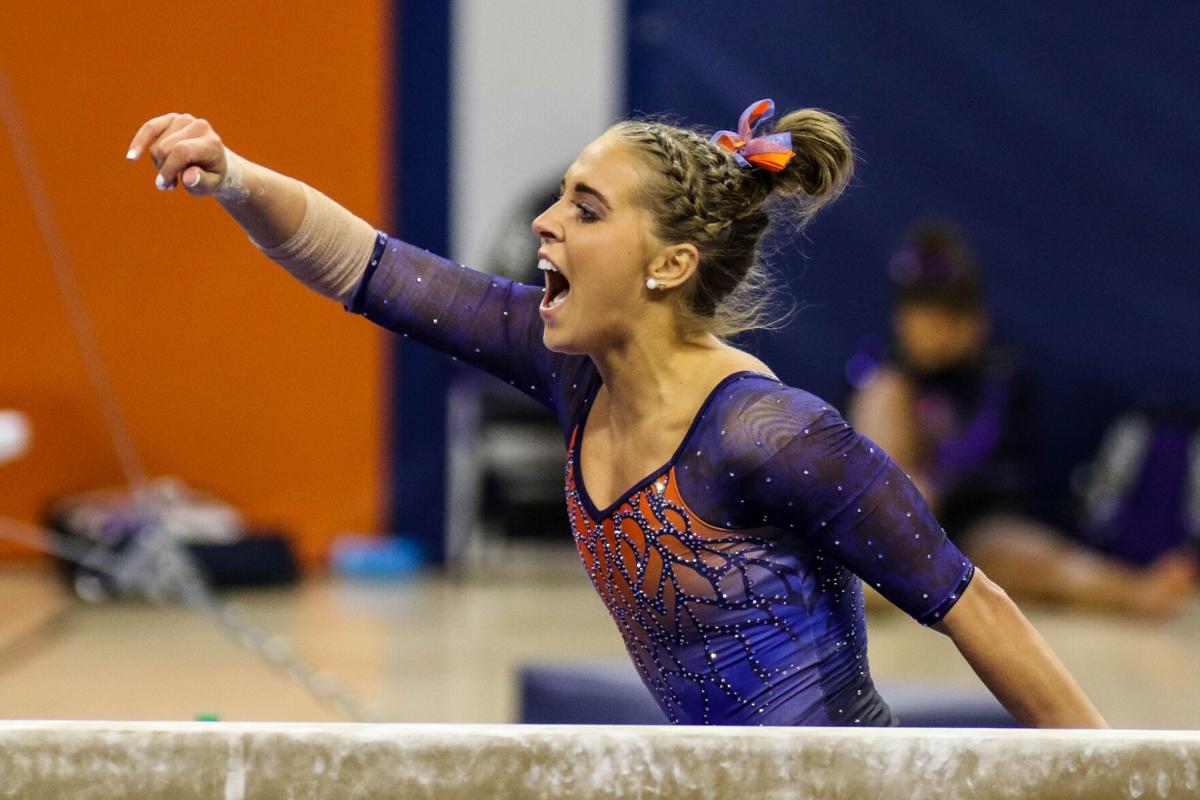 In this Feb. 5, 2021, file photo, Auburn’s Drew Watson celebrates after her beam routine against LSU at Auburn Arena. 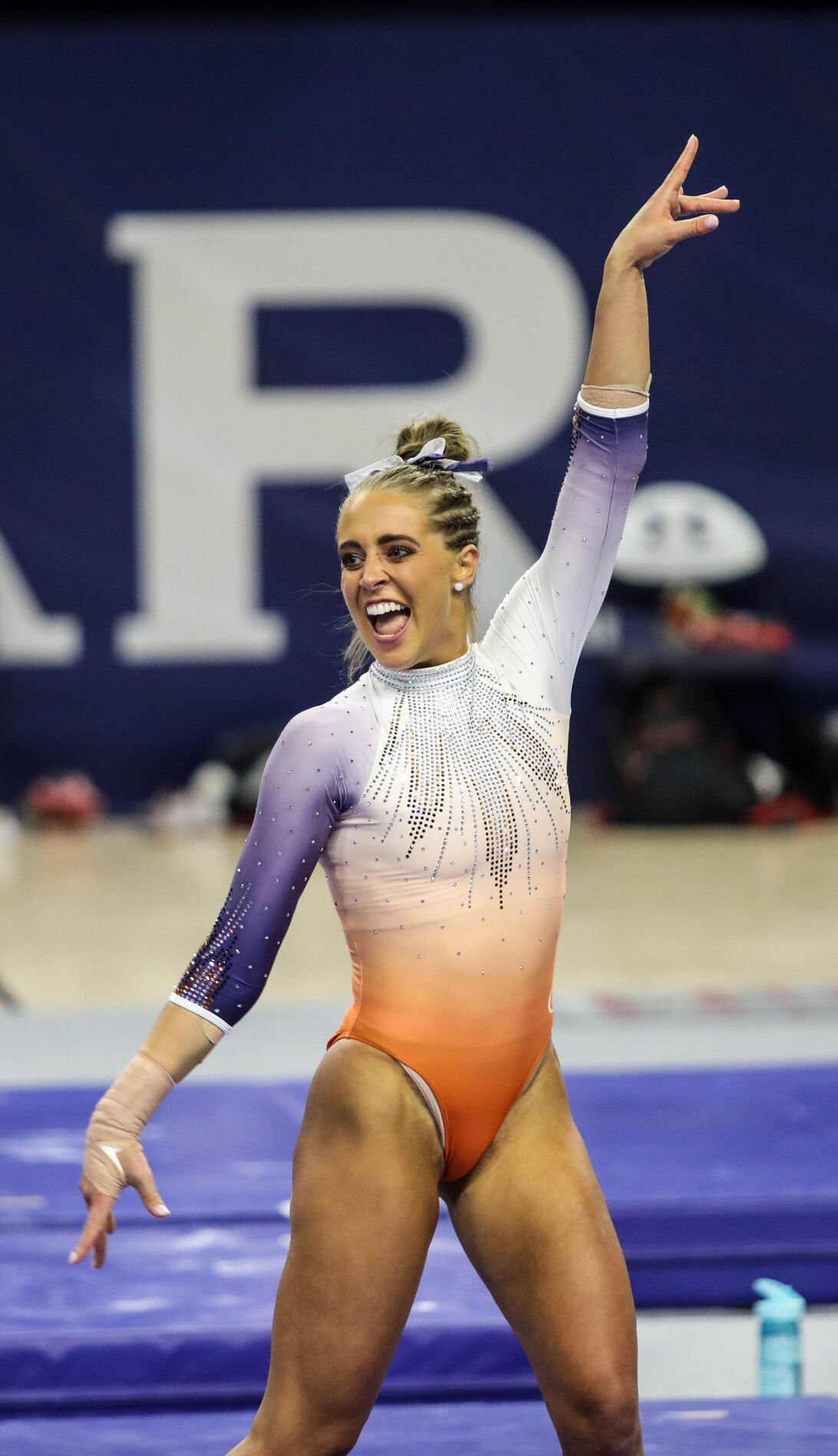 Auburn's Drew Watson celebrates during the Auburn vs. Arkansas gymnastics meet at Auburn Arena on March 5, 2021.

Going into the final rotation tied with the Tar Heels, the Auburn gymnastics team knew it would need something big down the stretch to win at North Carolina.

Watson launched her way to a meet-winning vault in the late stages of Friday’s tri-meet, twisting through the air as the Tigers twirled up the team standings, and Auburn won its season opener on the road in dramatic fashion.

Auburn put together a 196.250 road score to win the meet after a high-scoring finish on vault. It’s Auburn’s second-highest opening-night score in program history.

“The goal was to be tough and to fight and to figure out how to be a team, and we finally figured it out by the last event,” Auburn head coach Jeff Graba said. “I do think with a young team that’s got a lot of anxiety and a lot of stress opening up on the road, I thought they handled it really well and we’re really happy about it.”

Watson won vault with a meet-best 9.950, coming up clutch on Auburn’s second-to-last performance of the evening. Fellow Auburn star Derrian Gobourne tied on top of the medal stand on floor, hitting a 9.875 to match Bowling Green’s Taylor Jensen.

Watson and Gobourne pushed Auburn to victory. After Watson’s big vault, Gobourne closed Auburn out with a strong 9.875 in the anchor spot. Auburn Sara Hubbard also nailed a 9.875 to help produce a winning rotation for the Tigers on vault.

“We just were kind of like, ‘Let’s just leave it all out,’” Watson said of the team’s mentality heading to vault. “‘This is our last event. There’s nothing to lose. Just go big and finish strong.’”

Auburn enteres the season with high expectations, ranked No. 14 in the WGCA preseason rankings, and while the season is still revving up to full speed, the Tigers got the challenge it wanted out of its trip to Chapel Hill, and answered it.

“You don’t win if you can’t learn how to fight,” Graba said. “And we went tied to the final rotation and that’s where you see what you’re made of.

“This is the best first meet we’ve had in quite some time, and score-wise, it’s one of our best in history.”

Superstar freshman Suni Lee performed on bars and beam as she eased into her college gymnastics career. She scored a 9.775 on the bars after her feet hit the low bar during a connection, causing a deduction. On the beam, she finished with the night’s second-best score at 9.875, topped only by meet winner Julia Knower from North Carolina, who scored a 9.925.

Hitting the low bar incurred a decution of two 10ths. So, other than that mistake, her routine was essentially a 9.975 otherwise.

“She’s tough as nails,” Graba said. “You saw a person give one deduction, but doesn’t let it domino-effect into multiple deductions. She made one mistake and didn’t allow them to take deductions later on. That’s a true competitor. That’s premier.”

Lee and the rest of her Tiger teammates will look to lay down high scores again when Auburn continues its season with its SEC opener next Friday at Arkansas.

“It’s just super encouraging that that high score is our starting point,” Watson said. “It also just kind of makes us all hungry to get back in the gym and fix those minor things that we need to do and just keep building.”

Super Bowl LVI is almost here! A look back at some of the most popular ads of all time

Super Bowl LVI is almost here! A look back at some of the most popular ads of all time

A guide to the upcoming 2022 Beijing Olympic Winter Games

A guide to the upcoming 2022 Beijing Olympic Winter Games

In this Feb. 5, 2021, file photo, Auburn’s Drew Watson celebrates after her beam routine against LSU at Auburn Arena.

Auburn's Drew Watson celebrates during the Auburn vs. Arkansas gymnastics meet at Auburn Arena on March 5, 2021.