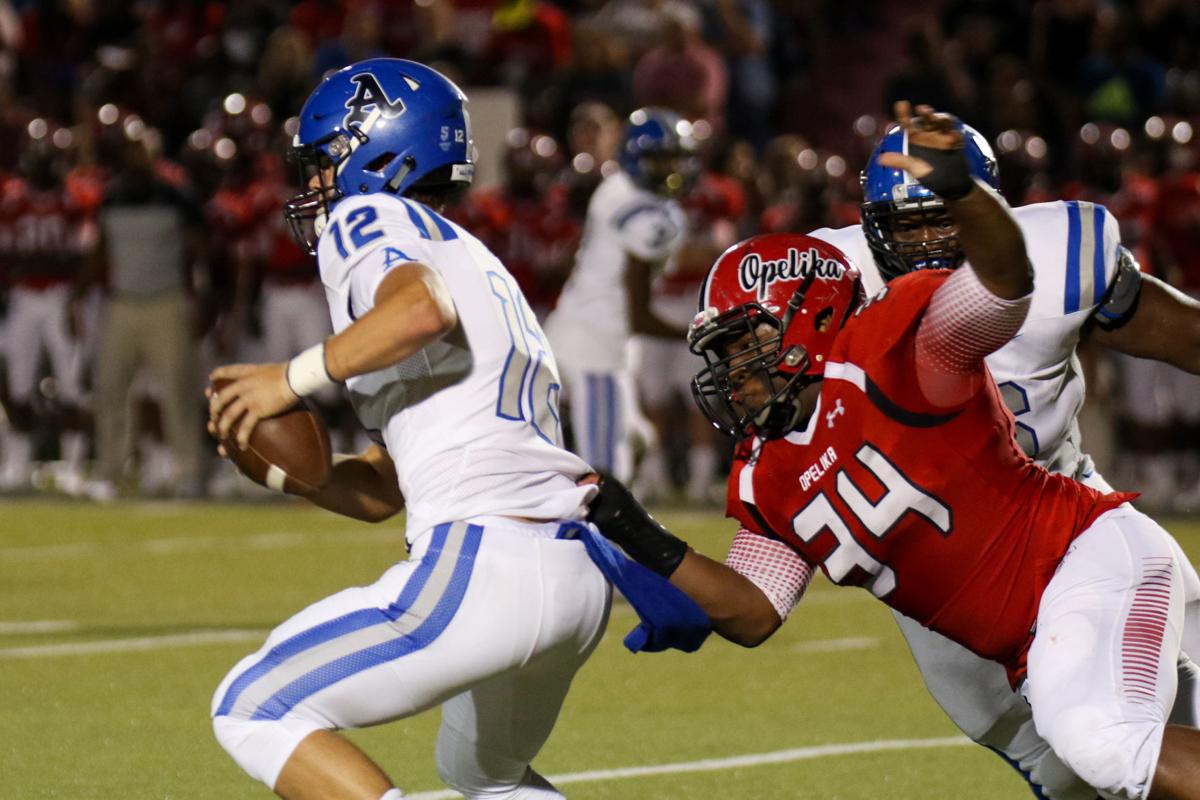 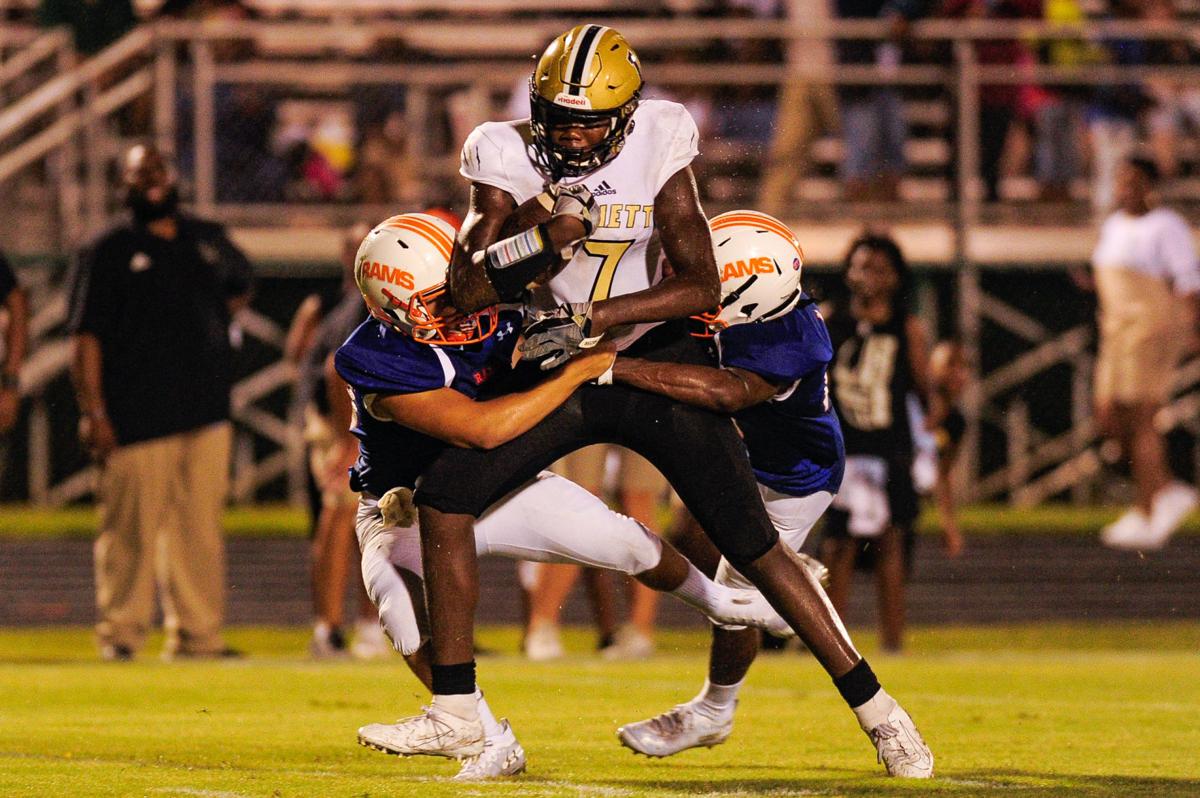 Lanett's Tra Abner (7) fights for yards after a catch in the first half of the Lanett versus Valley game on Aug. 23 in Valley.

There’s a little more than one month to go before the scheduled start of the 2020 high school football. While the season is far from being guaranteed to arrive on time, an excitement is quietly budding as the days pass by before it is time to finally hit the gridiron once again.

The early slate of the season features some incredible non-region matchups for the area teams, which is an aspect of the schedule worth diving further into. Here’s a glimpse at the best 10 non-region games featuring at least one of our area teams, with the games organized by date on the schedule.

Outlook: The matchup between the Rebels and the Warriors represents one of two major non-region showdowns featuring two local opponents on the first Thursday of the season. The game is essentially part of new eras for each program, as it will be the first game for Lee-Scott under new head coach Buster Daniel and it will be the first game for Chambers as an AISA Class AA program. The Rebels have been one of the most consistent AISA programs the last five years, and the Warriors will have to show up ready to go in order to give Daniel a real shot at his first victory as head coach.

Outlook: Reeltown versus Tallassee was what amounted to a crosstown rivalry that featured eight straight meetings in the late 1980s and early ‘90s followed by eight more consecutive meetings from 1996 until a dramatic Rebels’ victory 17 years ago. Now, the two meet on the first Thursday of the new season with Tallassee eager to make a postseason run and Reeltown stepping up to Class 3A after reaching the 2A title game last December.

Outlook: The Gators have a bad taste in their mouths after coming up on the wrong side of a 29-point scoring difference last November in Glenwood’s first state title game appearance since 2011, when the team also lost to Bessemer. The Gators are in good shape to compete in AISA’s Class AAA again, but their season opener will surely be an important measuring stick to start the new year.

Outlook: Opelika and Callaway have been two of the consistent powers in east Alabama and west Georgia for about the last decade, and their matchups the last two years have delivered matchups worthy of the talent within the two teams. The Bulldogs got the better of the Cavaliers last year after forcing three fumbles on defense, and their meeting this season in Georgia could prove to be one between two teams destined for deep playoff runs in their respective states.

Outlook: Much like the Opelika versus Callaway series, this inaugural matchup between the Red Devils and the Trojans features two of the premier programs in the Yellowhammer State and the Peach State. Between the two teams, there have been four state title game appearances and 10 10-win seasons in the past six years alone, with Central’s 2018 team being the only one to end the year as a champion. Expect this year’s showdown in Phenix City to be nothing short of a 48-minute battle.

Outlook: Both the Bulldogs and the Tigers waste little time in jumping straight in 2020, as Opelika opens the year with a talented Callaway team and Auburn hosts a dangerous Bob Jones team before facing off in one of the most-entertaining rivalries in Alabama. Each team has won twice in the last four meetings, and the last three games have been particularly interesting, as they’ve all been decided by eight points or less. Given the caliber of talent on both sides this season, it seems safe to say the fourth quarter will once again decide the bragging rights in Lee County’s biggest gridiron battle.

Outlook: Like Opelika and Auburn, Reeltown hits the ground running in 2020 as part of a season with high expectations but plenty of questions on a turned-over roster. After a tough battle in Week 1, the Rebels come right back in Week 2 by hosting a St. James squad that has won 38 games over the past four seasons. The Trojans are making a move up as well — from 3A to 4A — and they should be an opponent that will let the Rebels know where they stand among the best of the best this season.

Outlook: Despite the Rams’ long-term dominance of this annual rivalry, the Panthers have made considerable strides by winning three of the last four meetings. While Lanett has been on a roll of late, but sides face a tremendous amount of change this year: The Panthers graduated do-it-all quarterback Kristian Story and have moved back to 2A, while the Rams have also lost some tremendous playmakers and have ascended from 5A to 6A. The showdown with the Panthers will be first-year Valley head coach Adam Hunter’s second game at the helm, and it will be one in which his side will have to be ready to battle in order to keep up.

Outlook: A series that goes all the way back to 1928, the Central versus Opelika rivalry has been one full of big moments between two teams vying to make real noise in the state year after year. Last year’s showdown in Phenix City quickly turned into a shootout that Central won, but Opelika’s high-powered offense put up more points on the Red Devils than anyone had in the previous 22 games. Even though this year’s teams will look a bit different, it’s safe to assume another entertaining matchup will be in the works soon enough.

Outlook: Some teams with state-championship aspirations use the last week of the regular season as a chance to breathe, with some teams even opting to take a bye week then. That is not the case for Central or Oxford. This matchup will likely feature two teams among the top seeds in their respective classifications, and the Yellow Jackets will likely have plenty to still play for after capturing the Class 6A state title last December. The Red Devils have never been willing to back down from a big challenge, and they’ll face just that when they hit the road for a game the day before Halloween.

Lanett's Tra Abner (7) fights for yards after a catch in the first half of the Lanett versus Valley game on Aug. 23 in Valley.