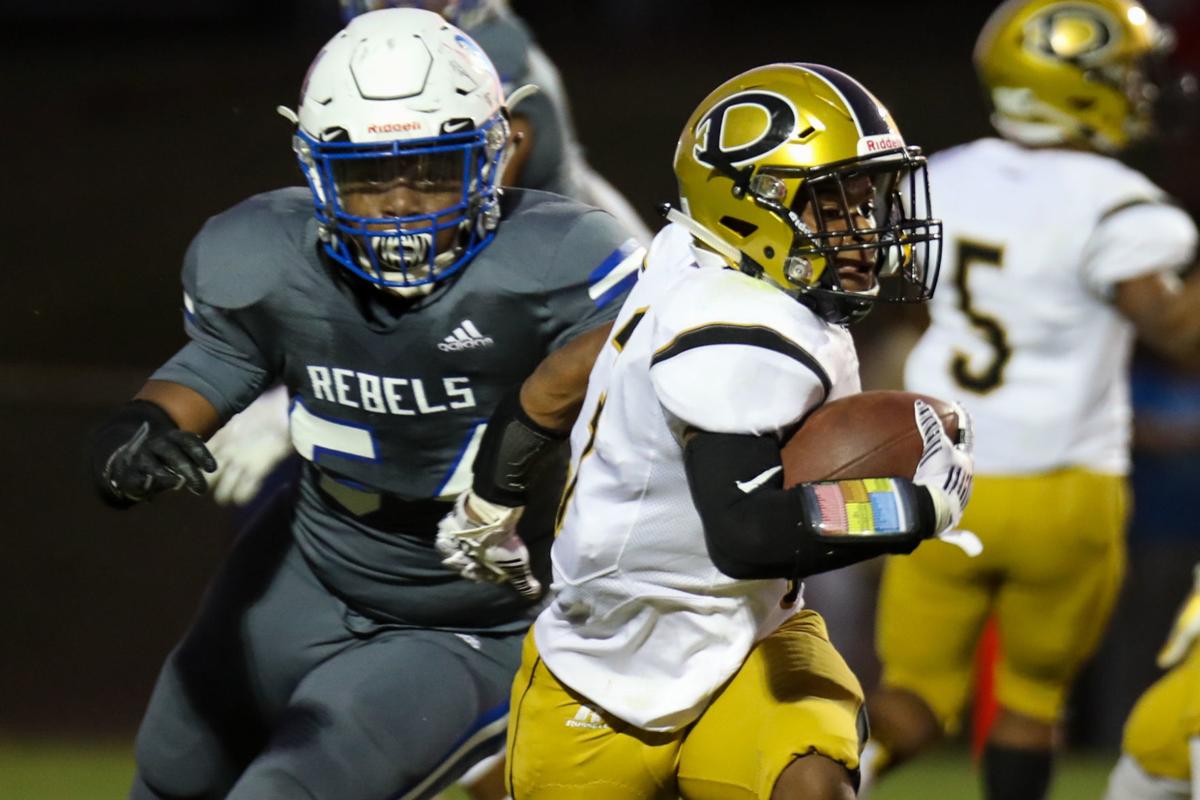 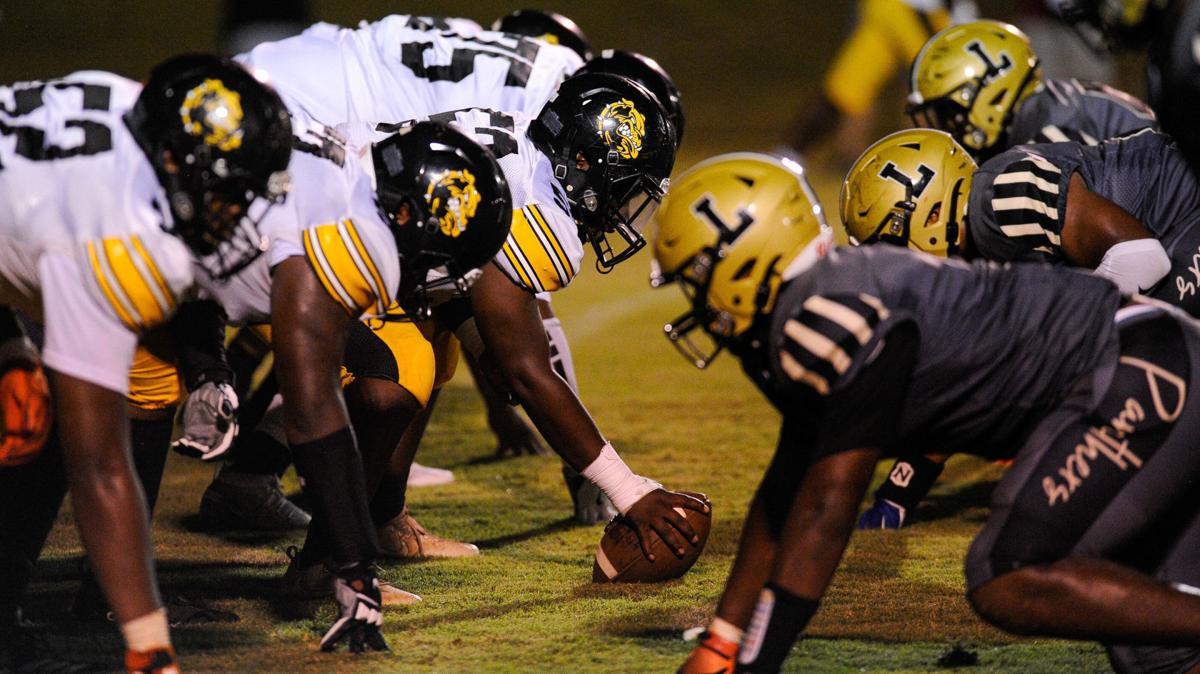 The Lanett Panthers and the LaFayette Bulldogs meet at the line before a play in the first half on Aug. 30 in Lanett.

The long-standing tradition of rivalries between local high school football programs is one of the key elements of some of the area’s top teams. This year, a pair of rivalries will see their intensity and importance kicked up a notch.

The rivalries between LaFayette and Lanett as well as Dadeville and Reeltown found new importance over the offseason once reclassification not only put each rival in the same classification but also in the same region.

Players from all four schools talked about what the rivalry means to them and how the stakes were raised during the Fox Sports 910-1310 AM The Game High School Football Media Days in Opelika last week.

“When we play Lanett, it's like one of the best rivalries ever played because you get so many scouts coming,” LaFayette receiver Ja'Mariae Daniel said. “When we play them and you're in the game, it's like the best feeling ever when you score a touchdown or catch a pick. That's the best feeling ever, when you're playing against your rival school. And also bragging rights. We're down the road from them, so it's going to be good.”

Lanett and LaFayette, which play in a rivalry known locally as “The Cat and Dog Fight of Hwy. 50”, have traded blows back and forth the past few years. Lanett has now won seven of the last eight meetings between the two teams, and the LaFayette players are eager to stop that streak.

LaFayette quarterback Tyquavious Daniel was an eighth grader the last time the Bulldogs topped the Panthers. In his mind, it’s up to himself and his teammates — especially his fellow seniors — to put an end to the Panthers’ dominance this September.

“This year playing them at home, we haven't beat them in the last three years. We can't take no more Ls,” Daniel said. “It's our last year, so we've got to go out with a bang.”

First-year LaFayette head coach Juan Williams may be new to the rivalry, but he already understands its significance to all involved.

Williams credited Lanett head coach Clifford Story — a LaFayette alum himself — and his players for the success they’ve achieved over the last few years. Now, Williams made it evident it is his mission to build a program much the same way Story built Lanett.

“Coach Story does a great job over there at Lanett. We're just trying to resemble that, to be honest with you,” William said. “It's like what I told these guys: in any rivalry, you first have to look at yourself. Are we doing what we're supposed to be do? The scoreboard will speak for itself. Like I tell our guys every day, the first guy we have to defeat every day is that man in the mirror.

“You have to look at him every day and say that he's ready before you can speak on anybody else.”

On the other side, Lanett’s recent run against LaFayette has coincided with the most successful set of seasons in program history. The Panthers are 40-5 over the past four seasons, which included two undefeated state championships in 2017 and 2019.

While the rivalry between the two teams is meaningful for the fan bases on both sides, Lanett receivers Seidrion Langston and Larontavious Hurston explained they don’t put too much stock in the rivalry come time for kickoff.

“The rivalry is just for the fans. It’s business,” Langston said. “They’re just another football team and another game on our schedule.”

“When it comes to the rivalry games, I don’t do too much talking. Talking can lead you to messing up in the game,” Hurston said. “I let them talk, and then I show it to them when I score.”

While Lanett has gotten a stranglehold on its biggest rivalry, Dadeville and Reeltown’s recent history has been much more back and forth.

Reeltown has won the last two meetings between the two teams, but over the last six seasons each program has three victories. The Tigers nearly pulled a huge upset over the Rebels last August in Reeltown’s 28-20 victory, and knowing the game could have implications toward Dadeville making the playoffs for the first time since 2015 only makes getting revenge this time around more important.

“We like to beat Reeltown every year, and they've always been pretty close,” Dadeville quarterback Lane Smith said. “Now that it's a region game, it's even more important to beat them. It helps us go to the playoffs.”

“I've always wanted to beat Reeltown anyway, so I'm even happier that it's a region game,” Dadeville linebacker Avontae Wilson said. “It will be more important to beat them now.”

Reeltown is coming off an impressive 13-2 campaign in which the Rebels reached the Class 2A state title game. The Rebels players practically followed the same playbook as the Panthers, explaining that they do their best not to put more weight into the Dadeville showdown than they should.

“I really don’t focus on the opponent. I focus on me and the team,” Reeltown offensive lineman L.J. Hill said. “We take it day by day. I really focus on our game and get better every day.”

Reeltown added another local rival this offseason, although it will not have region ramifications like the Dadeville game. The Rebels have added Tallassee to the schedule for the first time since 2003, reviving a rivalry that was previously played 16 times. Reeltown head coach Matt Johnson explained the game had been in the works for a while, and Tallassee head coach Mike Battles Jr. said the game was very important to both communities.

With the schools only separated by nine miles, the players have all gotten to know each other through the years. Even though they might not have even been born the last time the Rebels and Tigers battled, it’s evident this rivalry will soon take off right where it left off.

“It’s been a minute since I played Tallassee. The last time we played them, I was in little league,” Hill said. “I know it’s going to be a good game. The atmosphere is going to be there, but it wouldn’t change me or my team because I know like the championship or the Leroy game the atmosphere was there. We wouldn’t fold in that situation. I know this will be a good game, and I expect us to step up.”

“I'm counting down the days. We played them in little league and beat them. I want to play them again badly,” Tallassee linebacker Will Smith said. “They're running their mouths talking about how they’re better than us and talking about last season, but it doesn't matter. This is this season, so we're ready.”

The Lanett Panthers and the LaFayette Bulldogs meet at the line before a play in the first half on Aug. 30 in Lanett.