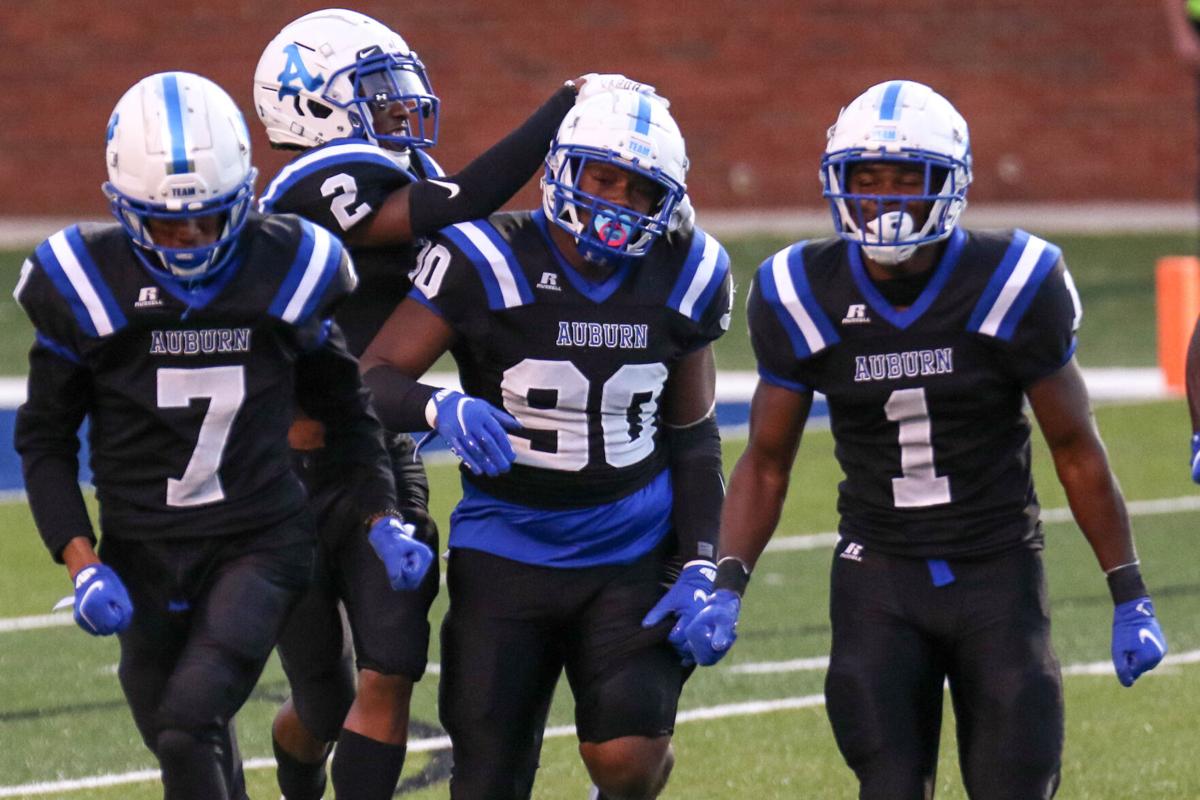 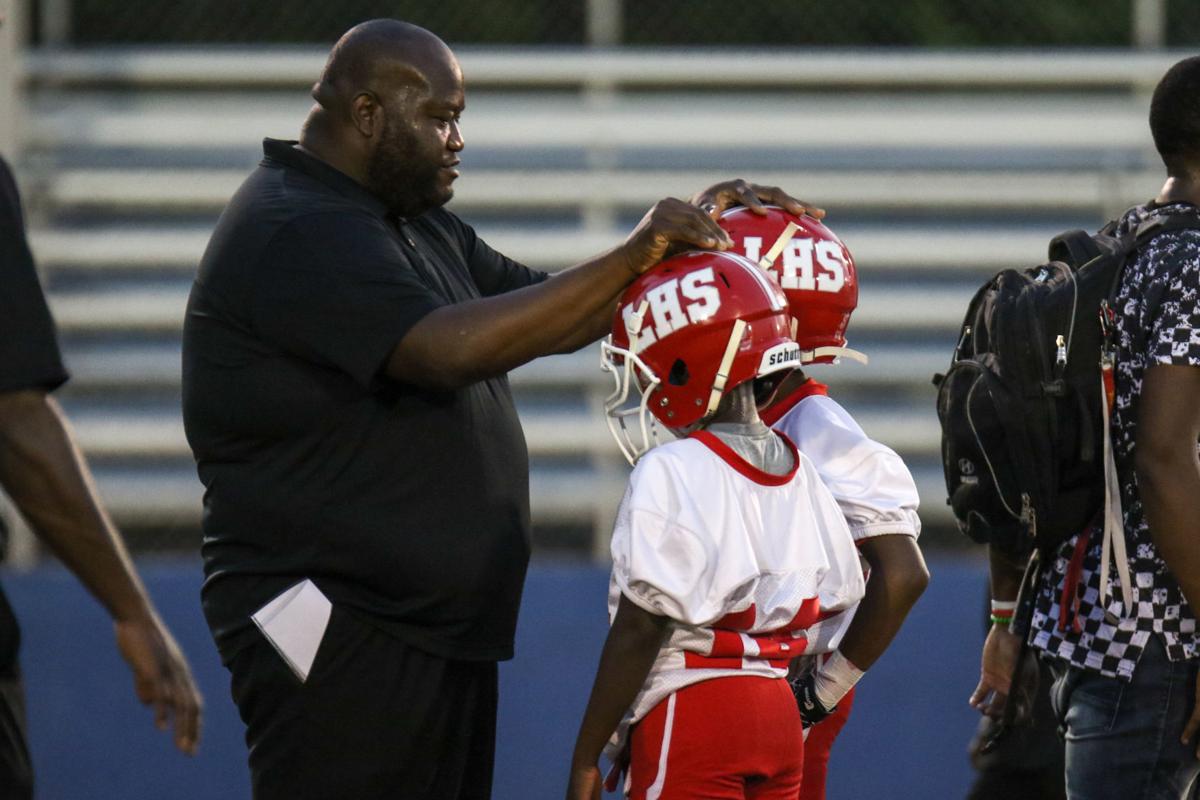 Loachapoka defensive coordinator Reco Newton talks to his players during warm-ups prior the Loachapoka vs. Notasulga high school football game at Sanderson Knapp Stadium in Notasulga on Oct. 3, 2019.

Two weeks ago, the Auburn High defense showed it could stand among the best in the state by shutting down the Opelika offense. On Friday, the Tigers proved they could play that way consistently.

Auburn was unrelenting on defense against Prattville by holding the Lions to 119 yards of offense and holding them scoreless in a 22-0 victory. The shutout was especially impressive given the Lions’ last shutout loss came on November 21, 2003.

The Tigers made a habit of swarming Prattville’s quarterback to the tune of several sacks and a handful of negative plays on the early downs. That combination of factors left the Lions in several third-and-long situations, which were understandably harder for the Lions to convert.

“I thought we played tremendously on defense,” Auburn head coach Adam Winegarden said. “We kind of owned the down-and-distance tonight. That was big for us. Our defense kept giving us the field position until we finally could score.”

The Tigers’ offense struggled with consistency against a talented Prattville defense featuring Alabama commit Ian Jackson, but the team effort thanks to Burnard Thomas’ special-teams score and the outstanding Auburn defense was enough. It was evident early on that the Auburn front had a clear advantage, and throughout the night they proved as much.

King of the Rhodes

Auburn punter Matthew Rhodes has developed a reputation for his accuracy and consistency, so much so that schools such as Army and Navy are recruiting the senior. On Friday, he showed that there’s a clear reason for all the hype.

Rhodes boomed punt after punt against Prattville, drilling six punts for 239 yards — an average of 39.8 yards per punt. Even Rhodes’ shorter punts came with a purpose, as his three shortest attempts pinned Prattville on its 8-yard line, its 13 and its 18.

Rhodes’ six punts left Prattville with an average starting field position of its own 20-yard line. Those attempts were crucial for Auburn — especially early on when the game was clearly up for grabs — and Rhodes’ importance in the victory should not be understated.

“Matthew is a weapon for us,” Winegarden said. “He's as big as any player on our team. I think he's the best friend of our defense and offense.”

Opelika’s loss to Auburn in Week 2 saw Bulldogs running back Eric Watts struggle to break through in an overall disappointing showing for the Opelika offense. This week, Watts and his teammates were determined to get back on track.

Watts tore up the Sidney Lanier defense on Friday to the tune of four rushing touchdowns in the Bulldogs’ 42-6 victory over the Poets. The win was certainly a big boost for Watts, who has shown himself to be one of the area’s best backs and demonstrated that he wouldn’t let one bad game derail the rest of the season.

Opelika was hit with some key absences against the Tigers, but there still remained a question about whether that tough loss would linger. Watts and his teammates instead proved that wouldn’t be the case and that everything the Bulldogs want to accomplish in 2020 is still ahead of them.

Through two weeks, Central-Phenix City had faced a lot of questions about its defense and found too few answers. On Friday, the Red Devils finally took a step in the right direction on that side of the ball.

Central bullied rival Smiths Station in the Backyard Brawl and didn’t let the Panthers muster much of anything on offense in the Red Devils’ 35-7 victory. That sentiment was especially the case in the game’s first 10 possessions, as the Central defense forced four turnovers, scored a defensive touchdown, nearly scored another, generated four three-and-outs, posted a turnover on downs inside their own red zone and allowed just one late scoring drive in the win.

The Red Devils had plenty of outstanding offensive players during Jamey DuBose’s era with the team, but a dominant defense became the cornerstone of every Central team during his time there. Although there have been a few bumps early in this season, it seems safe to say that tradition will continue under Patrick Nix’s leadership.

The Loachapoka Indians found themselves in a battle two weeks ago with Winterboro and just missed out on a victory to open the season. On Friday, the Indians made tangible progress and grabbed an important win.

Loachapoka topped Billingsley 24-16 thanks in part to a great game by quarterback Tyler Harris, who had two touchdown passes and broke a 62-yard run that ultimately put the Indians over the top. The win was an important one not only because it was the first under new head coach Reco Newton, but because it gave the Indians a 1-0 start in region play.

Loachapoka has been on the cusp of a return to the playoffs the last two years but missed out both times due to losses to Nostaulga. A strong start to region play was imperative for the team, and if they continue to make progress they could very well snap a four-year playoff drought.

Updates on local alums from Auburn High, Dadeville, Glenwood and Opelika, including UAB safety Will Boler.

Consider it ‘Moving Monday’ for the top five in the Prep Power Poll, which saw a few shake-ups after a telling Friday night for area teams in non-region play.

On a night when LaFayette sold out to stop the Dadeville rushing attack, Tigers quarterback Lane Smith made several huge plays to power Dadeville to a 18-7 victory.

Loachapoka defensive coordinator Reco Newton talks to his players during warm-ups prior the Loachapoka vs. Notasulga high school football game at Sanderson Knapp Stadium in Notasulga on Oct. 3, 2019.