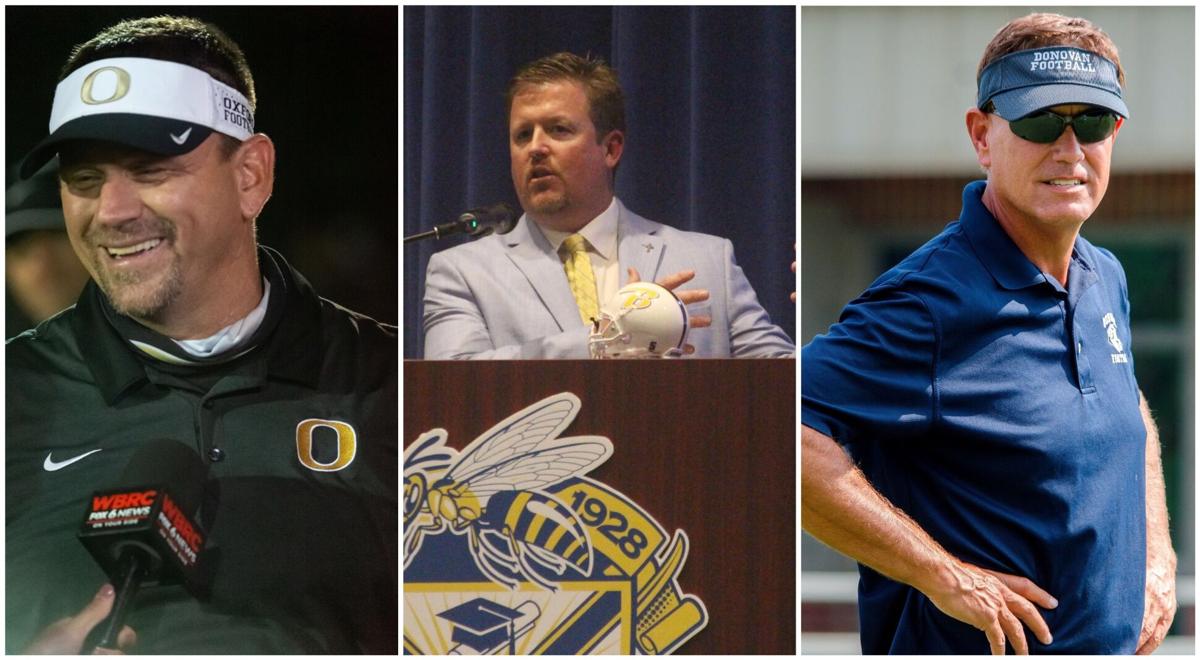 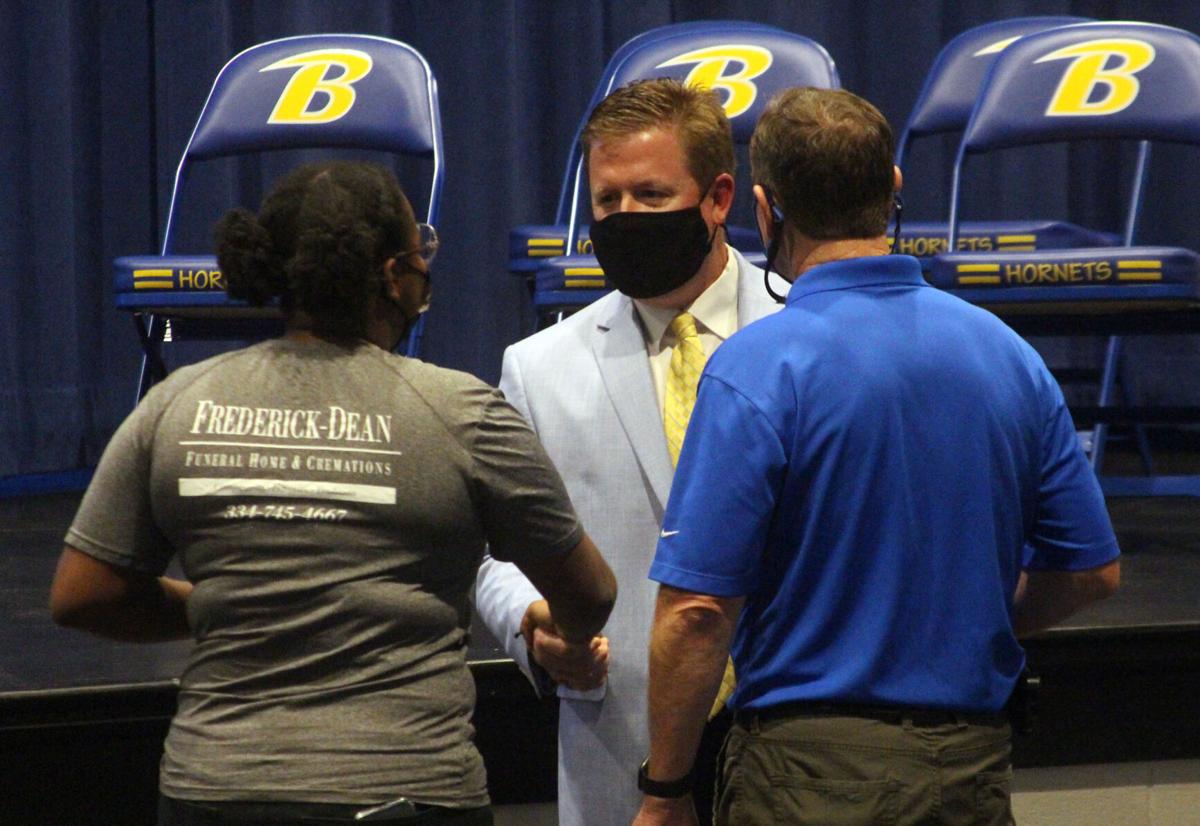 Following a 2020 high school football coaching carousel during which one-third of the local teams changed head coaches, the amount of movement this spring was much less significant but nevertheless interesting.

Former Prattville defensive coordinator Justin Jones’ hiring at Beauregard on Wednesday capped off what was a minimal amount of coaching turnover among area schools this offseason. Only three local teams will have a new head coach roaming the sidelines once the 2021 season begins in August.

Here’s a detailed look at each new head coach and what they plan to bring to their new programs in the years to come.

Summary: Winegarden resigned after leading the Tigers to the Class 7A state title game last fall and was replaced by Etheredge, who has a proven track record of winning everywhere he’s been. Etheredge has a 150-52 career record with 15 playoff appearances, two undefeated seasons and five state championships in 15 seasons as a head coach. He comes to Auburn after a successful two-year stint at Oxford during which the Yellow Jackets posted a 25-3 record and captured the Class 6A state title in 2019.

Outside his most recent job, Etheredge has been tasked with rebuilding programs in order to compete for championships. At Auburn, Etheredge inherits a team that came painfully close to a state title in December but still has enough playmakers to be in contention to win it all this time around.

They Said It: “We’re going to take on a blue-collar mentality. We’re going to work, and we’re going to deserve to be there at the end of the year, finish the job and win championships.”

Summary: Carter led the Hornets to their most consistent stretch of winning in program history — with the ultimate highlight being the team’s Class 5A state title in 2016 — but his departure for region foe Sylacauga opened the door for Jones, who arrives after spending 2020 as the defensive coordinator at Prattville. Jones already has plenty of experience as a head coach after leading Florala, New Brockton and Cordova over the course of eight seasons and accruing a 47-40 overall record in that time.

Beauregard’s success under Carter tapered off toward the end of his tenure — the Hornets went 10-20 over the last three seasons — but talent still remains within the program. It’s now Jones’ turn to lead the Hornets in an effort to help the program once again hold their own against the best teams Class 5A has to offer.

They Said It: “To me, any coach that really has a drive and a passion and a desire, [competing for championships] should be your goal anyway. It doesn’t really matter where it is. But here, it’s exciting because those are the type of expectations that people have. And our goal is, of course, to get us headed in that direction again.”

Summary: Gartman was unable to replicate the success he had at Pickens Academy and steps aside for former Vanderbilt record-setting quarterback Kurt Page. Page has a wealth of experience leading teams going back to his first head-coaching job in 1989, and along the way he’s coached in Alabama, Tennessee and Georgia and captured a state title at his alma mater, Father Ryan High School in Nashville, in 1997.

Gartman has coached at schools big and small and compared the rebuild he’s taking on at Springwood to the one he led at Monsignor Donovan Catholic School in Athens, Georgia, where Page led the football program from its creation and helped the Rams go 9-4 over the course of two years. Springwood hasn’t replicated the winning they did for most of the 1980s in quite some time, and it’s Page’s job to help the Wildcats reach that standard once again.

They Said It: “After they play Springwood, we want them to know our team is a tough team and we have a tough group of players. In every sport they’re tough and they play as hard as they can for as long as they can. That’s what you want to try to instill in these young people: just play as hard as you can for as long as you can and play for each other, and at the end of the day you’ve learned how to be successful.”

The Opelika boys were dominant at the Class 6A state track meet in Gulf Shores on their way to capturing the 6A state championship, marking their fourth team title since 2014.

"When they told me I was starting, I was looking forward to coming out here and trying to get us to the Final Four."

Local Legends: How did area alums perform during the FCS spring football season?

A number of area products played for their respective football teams this spring after the FCS fall season was postponed due to the coronavirus pandemic. So, how did they do?

The Auburn High Tigers had their backs against the wall Friday against Daphne, but rather than panic the Tigers rose to the occasion.

The Auburn High girls golf team punched its ticker to the state tournament on Tuesday with a first-place finish at the sub-state event in Mobile.

Auburn High softball erased Central’s lead with a four-run outburst in the fourth and promptly put the game away with a five-run sixth to set the stage for a 13-5 victory.

Facing a chance to go to the state semifinals for the first time in nearly a decade, the Central-Phenix City Red Devils proved they were up for the challenge Saturday.

The Auburn High softball team put itself in the driver’s seat Wednesday by beating Smiths Station 7-2 before topping Central-Phenix 7-0 to open the Area 4-7A tournament.

Former Opelika running back Josh Johnson will have a chance to prove himself in the NFL.