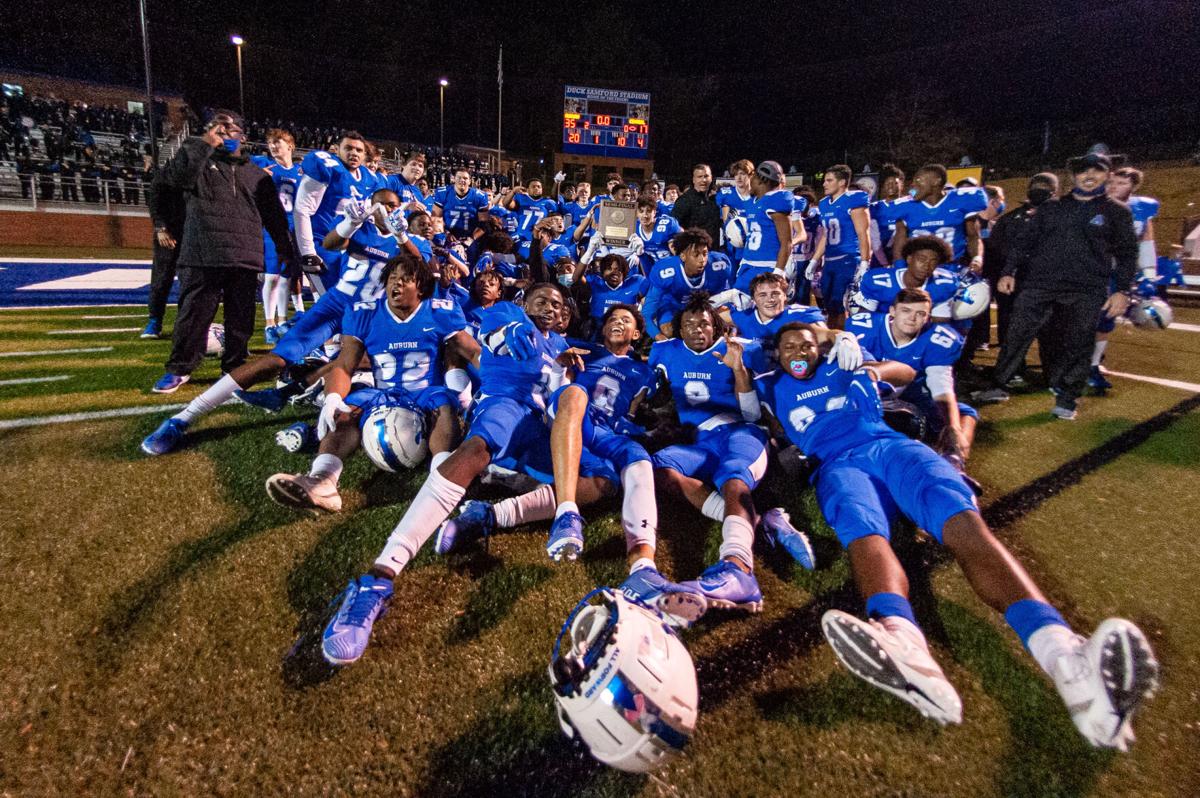 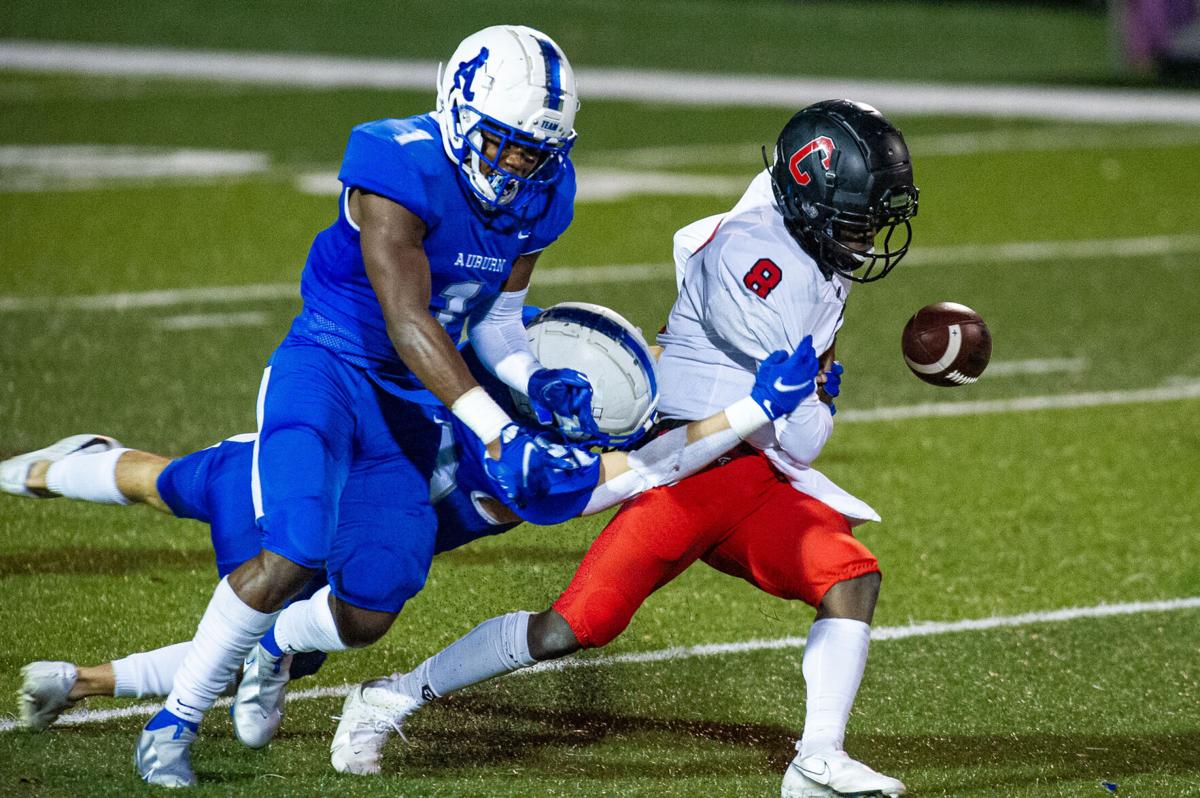 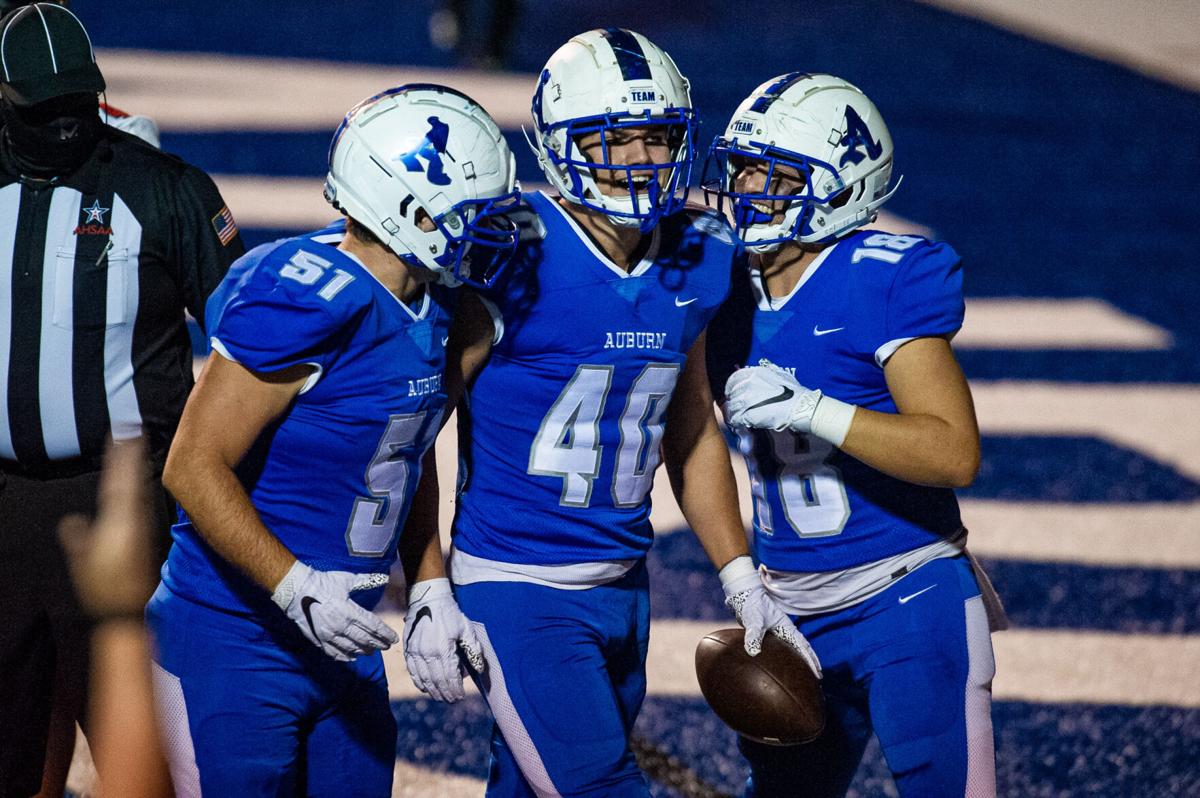 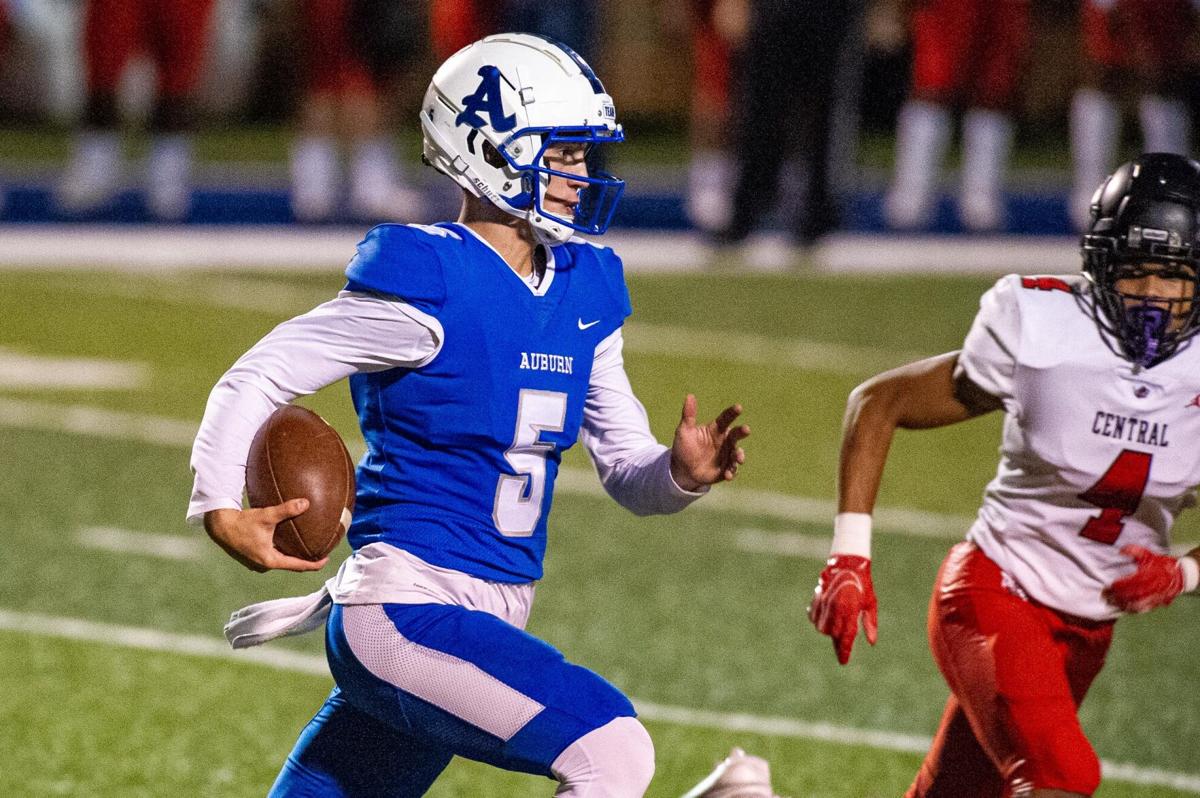 The Auburn High Tigers had rival Central-Phenix City on the ropes in the fourth quarter of Friday night’s Class 7A state semifinal game but needed one more punch to land the knockout. Running back JT Rogers delivered that blow with 2:39 to go with a play that punched the Tigers’ ticket to Tuscaloosa.

Rogers broke a 60-yard touchdown run in the final minutes to put the Red Devils on ice and seal a 35-17 victory for the Tigers. The win sends Auburn High to the Class 7A state title game, where the Tigers will face defending state champion Thompson at 7 p.m. on Dec. 2 in Bryant-Denny Stadium.

“My offensive line — they blocked beautifully. As soon as I cut back, I didn't see nothing but green grass. I just ran like a bat out of hell,” said Rogers, who had 16 carries for 105 yards and one score and also had an eight-yard touchdown reception. “It means everything. Our team put in the work since June or July. It means so much to us. We stayed together as a team. We fought as a team.

Rogers’ run was the final highlight in a second half in which the Tigers took Central (8-5) from in contention to out of hope.

Auburn (12-1) held a four-point advantage when it received the kick to start the second half and immediately went to work to stretch the lead. Quarterback Matthew Caldwell added to an impressive first two quarters in a hurry by leading a 12-play drive during which he completed all six of his attempts.

Tigers running back Amaury Hutchinson ended the drive in style by fighting his way to the end zone on a two-yard run that pushed the Tigers’ lead to 21-10 with 6:39 left in the third quarter.

The Tigers had contained Central’s offense for the most part — but that wasn’t the case after Hutchinson’s touchdown. Red Devils running back Joseph McKay broke his biggest play of the evening on the second play after the score and took off up the middle on a 65-yard touchdown run that suddenly sliced Auburn’s lead back down to four.

Despite the sudden swing in Central’s favor, the Tigers didn’t panic.

Consecutive kickoffs out of bounds pushed Central’s kick back deep in its own territory, and by the time Auburn returner Quay Ross was taken down on the third attempt the Tigers were sitting on the Central 40-yard line .This time the Tigers’ ground game led the way, as Rogers and Hutchinson traded carries before Hutchinson finished things off with a one-yard plunge to push the Tigers’ lead to 28-17 with 2:06 remaining in the third quarter.

Rogers pointed to his friendship with Hutchinson, who had 13 carries for 47 yards and two touchdowns, as pivotal for how the two play every time they touch the ball.

From there, the two defenses held serve for several minutes.

The Tigers were in prime position to finish things off after a Central three-and-out before Caldwell was sacked and lost the football, giving the Red Devils their chance to respond just past midfield. Auburn’s Powell Gordon had other ideas, however, as he chased down Central quarterback Trey Miles on the next play and forced a fumble, which Joey McGinty recovered.

Auburn pulled out its trick plays and had punter Matthew Rhodes throw a pass to Carson Yancy to keep the next drive alive, but ultimately the Tigers turned the ball over on downs just inside the Central 20-yard line. The Red Devils’ next drive flamed out and ended on an incompletion to give the Tigers the ball on their 45-yard line with less than three minutes to go.

Then came Rogers’ house call that sent the Tigers — and the home side of Duck Samford Stadium — into a frenzy.

“My mind, it was just going crazy. I was running in circles. I was so excited,” said wide receiver Bryson Clague, who had nine receptions for 115 yards. “JT with that speed, he just took it all the way. I mean, we were throwing peace signs up and telling them we won and all that. It was great.”

“Hey, I was trying to catch him. I don't know if you saw me, but I almost hawked him down,” said Caldwell, who was 15-of-19 passing for 160 yards with one touchdown and one interception. “If I was on defense, I probably would have made a tackle. He made a great run to seal the game. You can't ask for anything else than that.”

Roger’s mad dash to the end zone finished off a dominating run by Auburn that truly began when the Tigers ended the first half with one final scoring surge.

Shortly after Central’s Noah Pell connected on a 29-yard field goal, Caldwell got the offense going downfield thanks to passes to Clague and Rusty McKinnell, the latter of whom drew a personal-foul penalty at the end of the play. The Red Devils threatened to get a stop down by the goal line, but Caldwell ensured that wasn’t the case by firing Rogers’ way on third-and-goal.

Rogers was all alone on the right side of the field, making it clear as long as he made the grab he would find the end zone. The senior made it happen and raced to the end zone to hand Auburn a four-point lead with 38 seconds to go until halftime.

The Caldwell-to-Rogers connection was a perfect close to a first half that featured a near-picture perfect start for Auburn.

After forcing a quick three-and-out by Central, Caldwell and the rest of the offense hit the field determined to start strong. After Caldwell broke a 24-yard run to get things going, he found Clague four times over the next seven plays to push the Tigers well into Red Devil territory.

Auburn fullback George Wright ended the drive with a bang by bullying his way through the middle of the line for a three-yard rushing touchdown. Wright’s early score gave the Tigers a 7-0 lead with 5:16 to go in the first quarter.

To their credit, the Red Devils answered right back. Central quarterback Caleb Nix hit Karmello English four times on a 12-play drive, but it was Jackson Meeks who found the end zone on a seven-yard pass.

Meeks’ touchdown knotted the game at 7-7 with 57 seconds still left in the opening quarter. He ended the evening with six receptions for 77 yards and one touchdown.

Rogers’ late run unofficially added another chapter to the Tigers’ season and propelled them to the state finals for the first time since 2013. The moment the game went final was a frenzy on the field, as the Tigers raced to the end zone to sing and sway while the band played the alma mater before posing for a photo with the semifinals trophy and greeting their friends and family in the stands.

Caldwell wasn’t in Auburn the last time the team played for a title — he transferred from Eufaula before his junior year — but the moment was just as sweet as it was for the Tigers around him.

Among the Tigers being bombarded once the game ended was head coach Adam Winegarden, who’ll head to the Super 7 for the first time as the Tigers head coach. He had said throughout the season that the Tigers were beyond thankful to even have a season; now, thanks to his players’ efforts Friday, they have a chance to end that miracle season with the program’s first state championship.

Smiths Station hasn’t made the playoffs since 2013. Is this the year the Panthers’ streak ends?

After knocking on the door of the playoffs the last three seasons, the Smiths Stations Panthers football team are hoping to burst through in 2021.

“If you want to show somebody that’s been successful doing things the right way, you can point to Taylor.”

Lee-Scott Academy football faced real hurdles in 2020. Will the Warriors rebound this fall?

It seemed like Lee-Scott head coach Buster Daniel and the Warriors were always playing catch-up last fall. Now, the Warriors are hoping to turn a corner after a productive offseason

"I've just been trying to get better at every little detail and trying just to improve my game in all aspects ... [Winning the championship is] the number one motivation."

Central-Phenix City’s run of region titles ended last fall. Can the Red Devils bring it back?

Central’s stretch of utter dominance in Region 2-7A shifted significantly in 2020 with Auburn High's emergence, but the Red Devils still fought hard. Can they bounce back in 2021?

This is a new era of Russell County football. Will it be a winning one for the Warriors?

Russell County is turning its football program over to an up-and-coming coach determined to make the Warriors a winner. Will they be able to do just that in Year 1?

Central-Phenix City defensive lineman Tomarrion Parker is still in the midst of the recruiting process, but on Sunday the rising junior took time to list his top schools.

Glenwood has gone to consecutive state title games. Can the Gators break through this fall?

After two straight trips to the state title game, the Glenwood Gators have lost a considerable number of their most trusted playmakers. Will they be rebuilding or reloading in 2021?