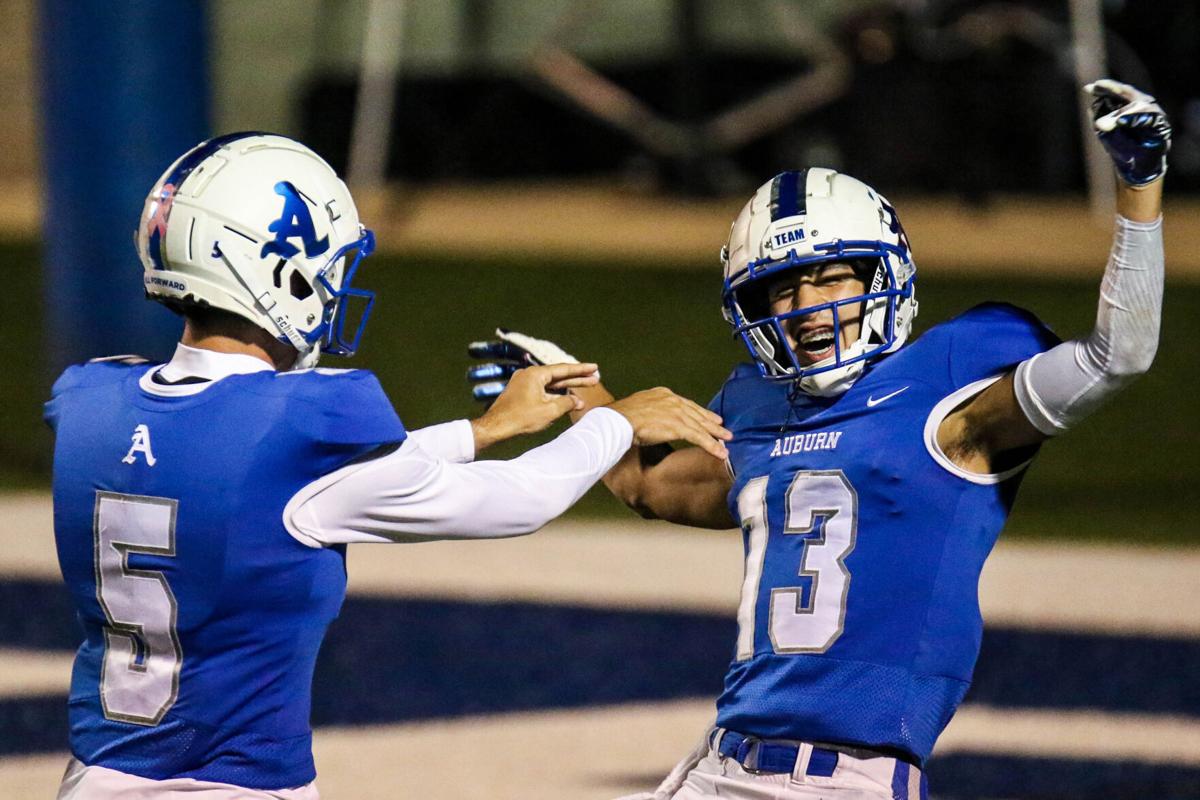 Auburn High's Matthew Caldwell (5) and Bryson Clague (13) celebrate a touchdown during the team's victory over Smiths Station on Friday in Duck Samford Stadium. The win clinched Auburn High the Region 2-7A championship, marking the program's first region title since 2013. 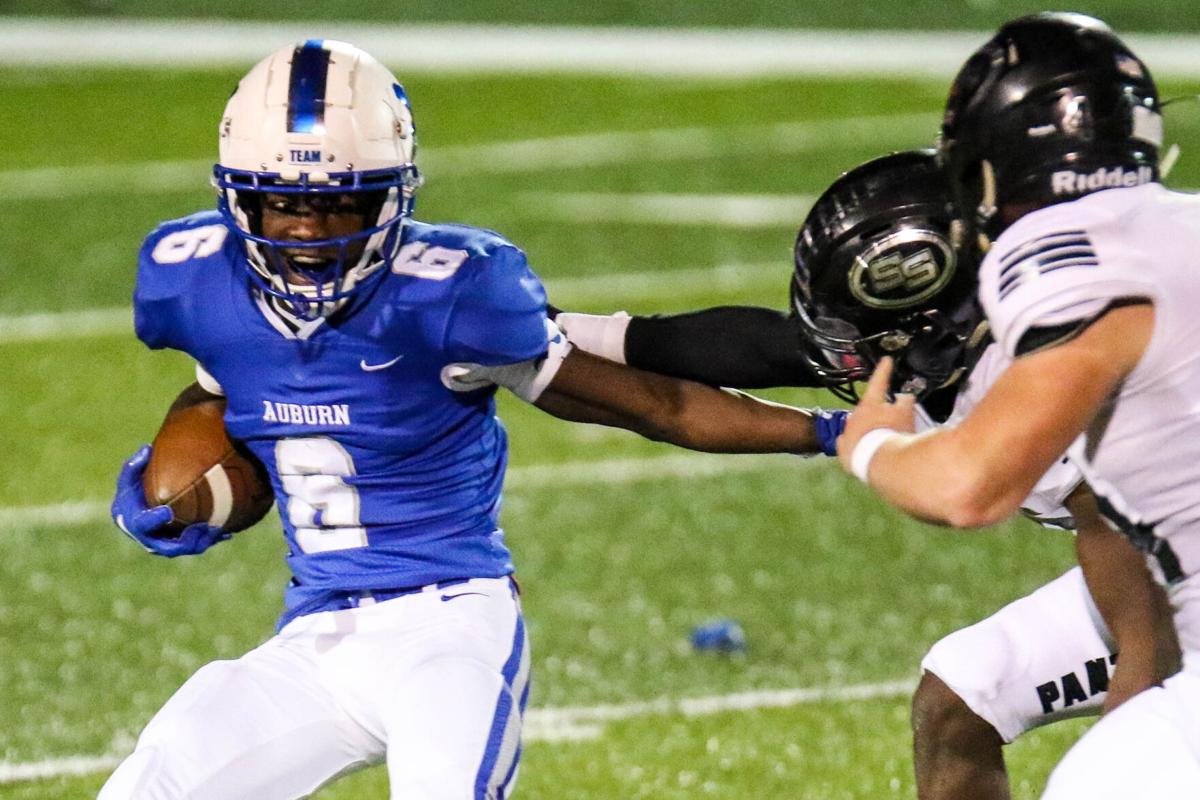 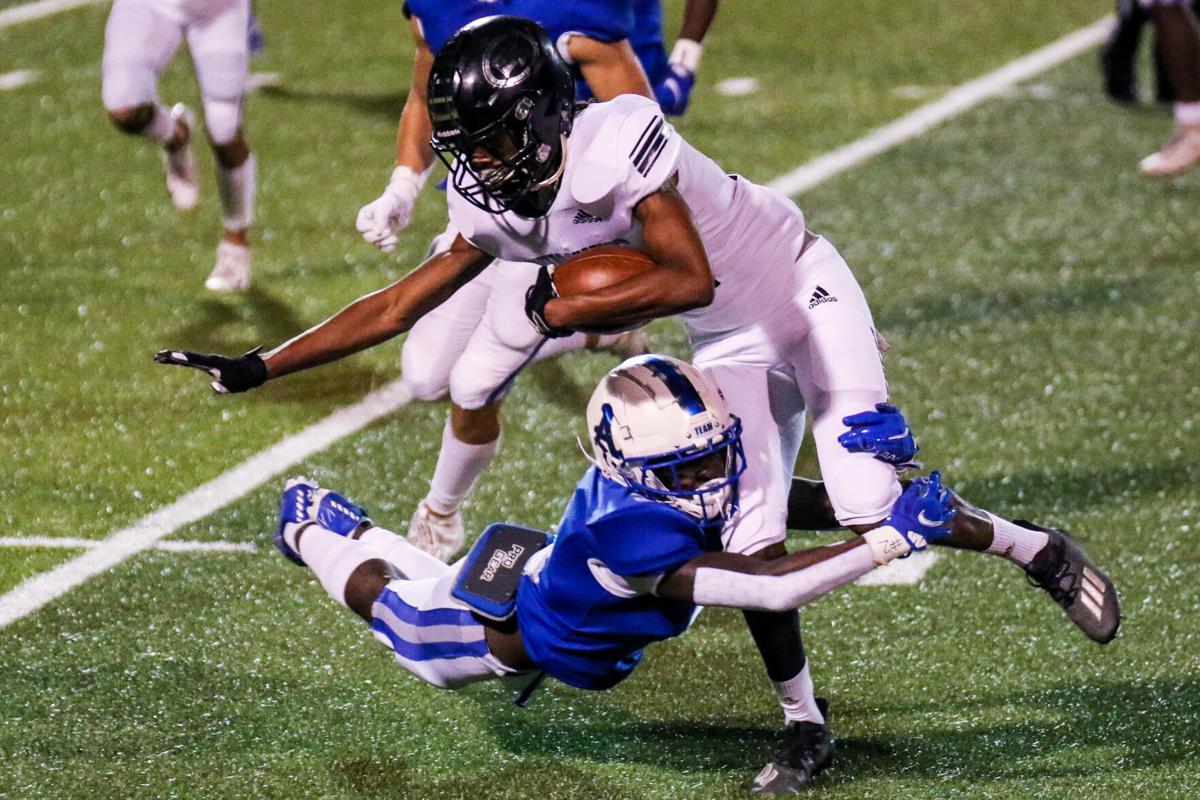 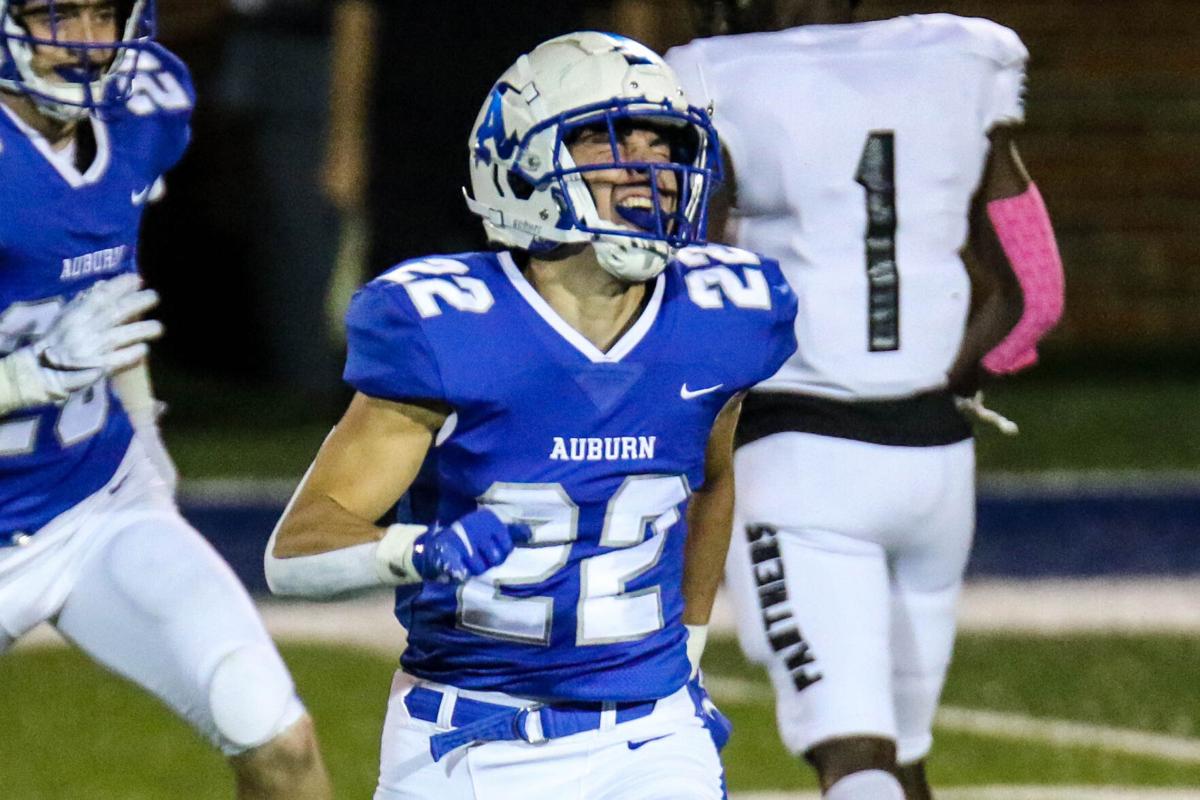 Before the season began, Adam Winegarden talked with his Auburn High football team about how it was time to finally win a region title.

The Tigers had been on a long streak of playoff appearances as a No. 2 seed. But this year could be different.

And Friday night, with a chance to clinch Region 2-7A, Auburn wasted zero time in claiming its long-awaited crown.

Thanks to a dominant first-half performance, Auburn cruised past Smiths Station, 45-14, to move to 9-0 on the season and lock down its first region title since 2013.

“I’m really proud of our kids,” Winegarden said. “We’ve got a lot of football ahead of us. I know they’re excited about tonight, and they need to enjoy this.”

At the end of the game, Auburn’s players sprinted to the south end zone at Duck Samford Stadium for the traditional playing of the school’s alma mater. Then they posed for pictures as a team, index fingers pointed toward the cool night sky.

The location was fitting, considering Auburn got well-acquainted with that same end zone. The Tigers’ offense scored three touchdowns there in the first quarter. It was an easy task, thanks to their dominant defense. Auburn’s first three touchdown drives started at the Smiths Station 40-, 35- and 31-yard lines, respectively.

And, on a senior night at The Duck, all six of the Tigers’ touchdowns were scored exclusively by seniors. Quarterback Matthew Caldwell went 10-of-14 passing for 194 yards and four of those touchdowns — two to Bryson Clague, one to Quay Ross and one to Zay Ray.

Auburn also rushed for more than 200 yards, spreading the wealth among several backs. JT Rogers, who got things started with a 5-yard touchdown run, had 12 carries for 76 yards. Amaury Hutchinson rushed for 43 yards, including an 11-yard touchdown run in the third quarter.

The Tigers forced the visiting Panthers to go three-and-out on their first trio of drives. The ball didn’t cross midfield until late in the first quarter, and that by way of a couple of penalties from the Auburn defense.

It was a fast and furious start for some focused Tigers, who didn’t play last week due to a cancelation from Georgia’s Riverdale.

“We had a week off and then played Central, then another week off again before tonight,” Winegarden said. “That’s tough. We thought we might start off a little bit slow, and we didn’t. We started off really fast, and I’m proud of our guys for that.”

Smiths Station tried to gain some ground in the field position battle with two excellent punts in the second quarter. However, Auburn’s offense was able to put together a 98-yard touchdown drive to extend its lead. Caldwell opened the drive with a 40-yard deep ball to Ray and finished it with a nice fourth-down touch pass to Clague for a 33-yard score.

Auburn’s lone misfire on offense in the first half came when Caldwell was pressured into throwing a pick near midfield. But Auburn’s defense came through for its quarterback, as it generated interceptions of its own on both sides of that giveaway. Caldwell capped a two-minute drill sparked by excellent rushing with his second touchdown pass to Clague just before halftime.

Hutchinson opened the second half with his touchdown run. The Tigers’ second-string offense came close to adding another touchdown in the third quarter but had to settle for a short field goal.

Smiths Station, as it has all season, showed great life in the second half despite the lopsided scoreboard. Panthers quarterback Corey Minton was a weapon running the ball, and he scored from six yards out early in the fourth quarter after an Auburn fumble deep inside its own territory.

On their next drive, the Panthers broke off a few explosive runs before Iverson Jones added another touchdown from four yards out against Auburn’s top-notch defense.

“They’ve been consistent,” Winegarden said of his defense. “They love to play, they love to compete. Tonight, I thought they flew around really well. Hey, we gave up some scores there at the end, but you’ve got to give Smiths Station a lot of credit for that.”

Auburn was able to chew the rest of the clock after Smiths Station’s second touchdown, and then the celebration began for the home team.

The Tigers will wrap up their regular season with a road game against Enterprise next Friday night. Then they’ll have an off week before entering the 7A playoffs as a No. 1 seed.

“It’s been an odd year, and there have been a lot of adversities that everyone has had to go through,” Winegarden said. “It’s been unique for sure. But success feels good.”

Auburn High's Matthew Caldwell (5) and Bryson Clague (13) celebrate a touchdown during the team's victory over Smiths Station on Friday in Duck Samford Stadium. The win clinched Auburn High the Region 2-7A championship, marking the program's first region title since 2013.