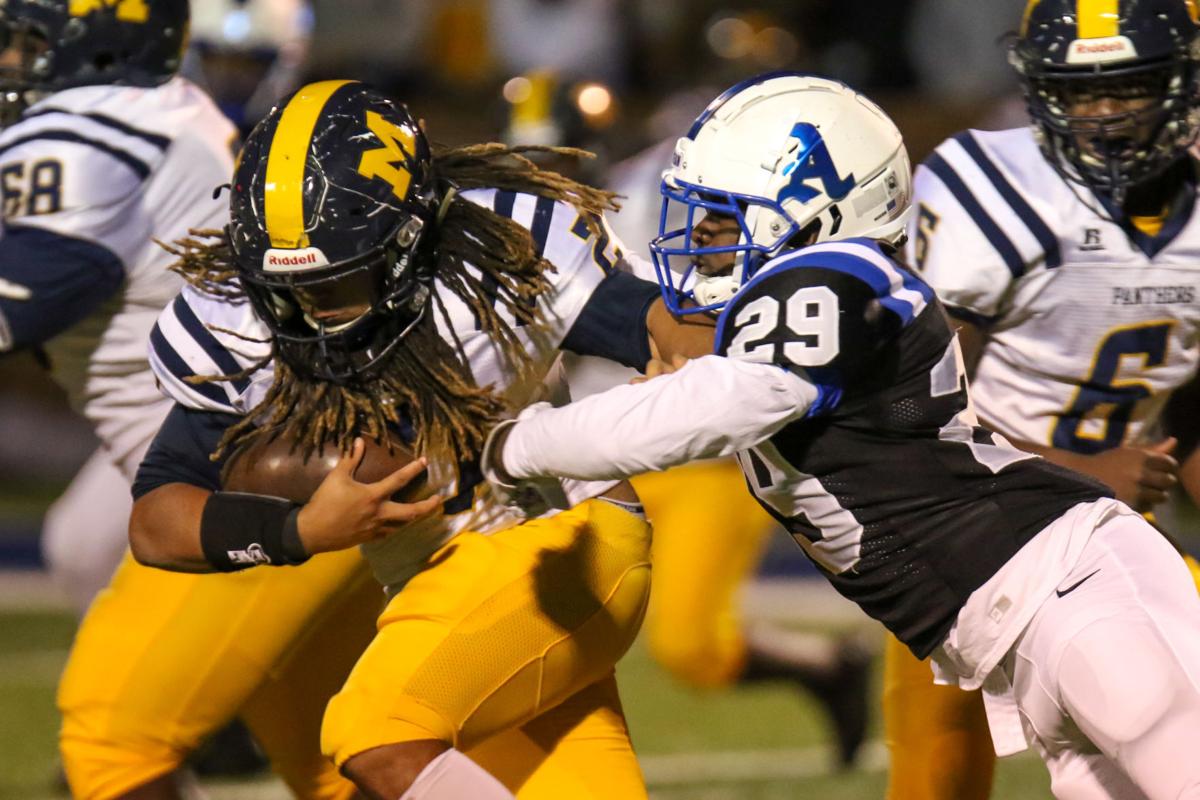 Auburn High defensive back Amaury Hutchinson (29) wraps up Breland Manley (27) during the Auburn High vs. Murphy football game at Duck Samford Stadium in Auburn on Nov. 8. 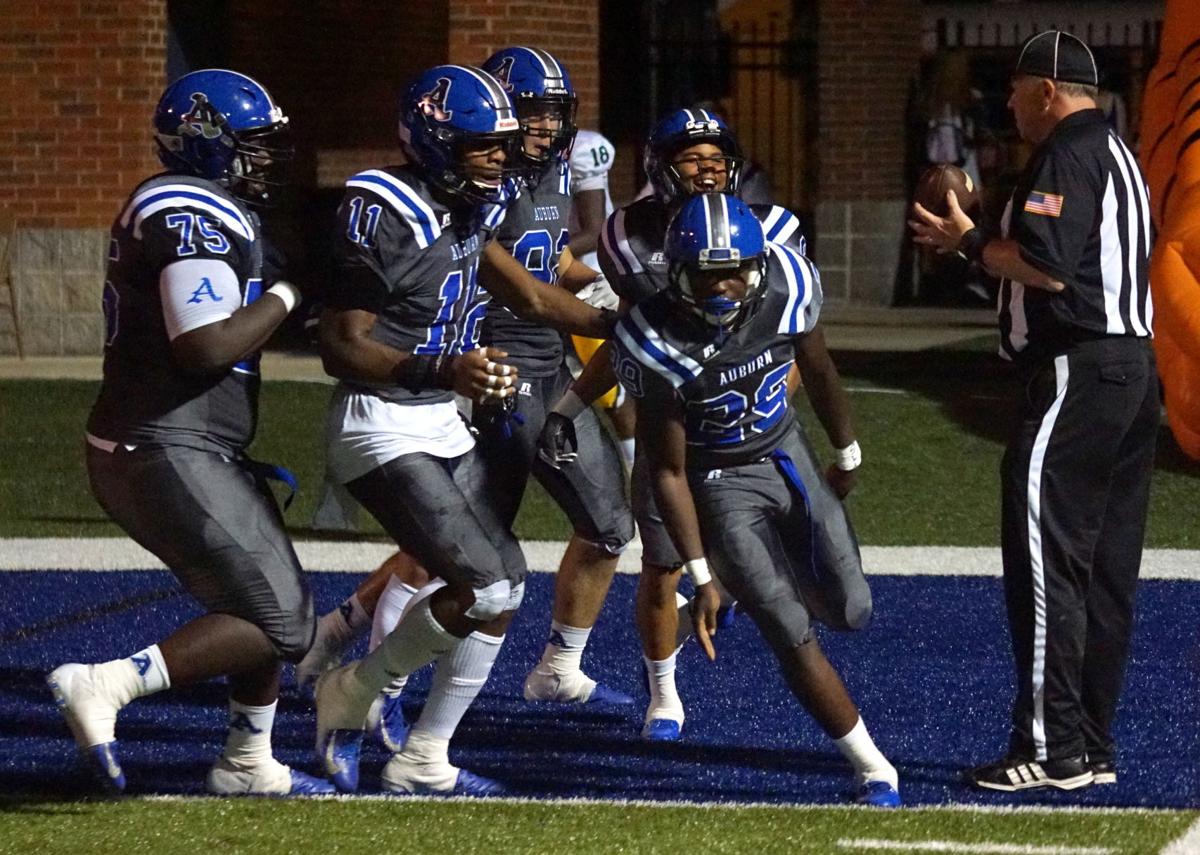 Auburn High's Amaury Hutchinson (29) celebrates after returning an interception for a touchdown in the first quarter. Auburn vs. Jeff Davis at Duck Samford Stadium on Friday, Sept. 21, 2018.

During his high school career, Auburn High defensive back Amaury Hutchinson has been a reliable player on the back-end of the Tigers’ consistently dominant defense. Last week, Hutchinson put that big-play ability on display at a football camp with a performance that caught onlookers’ attention.

Hutchinson showed out at the National Underclassmen Combine’s camp in Sugar Hill, Georgia, last Sunday by impressing the camp’s coaches and earning MVP honors among the camp’s defensive backs. The outing was a strong one for Hutchinson, who is a 5-foot-10, 185-pound rising senior returning as part of an Auburn team that won nine games in 2019.

“It was a lot of good competition to go against. We had a good coaching staff to lead us. At the end of the competition period, they put the best against the best. That showed who the real dogs were. That would be my favorite part,” Hutchinson said. “I felt pretty good, but I remained humble with my performance. Overall, I think I saw my flaws on what I need to work on, so I think I still got more work to do.”

Hutchinson said the players at the camp went through a lot of agility and footwork drills, with the coaches testing hip movement and how fast they could react to the ball. After the position groups went through the drills, the players transitioned to half-field combo drills and finally the coveted 7-on-7 showdown.

Hutchinson clearly impressed the coaches working the camp given his award. For Hutchinson, it was reassurance that he was able to handle even the toughest competition that lines up against him.

“It showed that I can compete with the best,” Hutchinson said. “I’ve always known that if I get a shot I was going to show that I can play at the next level.”

Hutchinson has received some interest from colleges this summer, saying Western Illinois and South Carolina State have reached out over the last few months. While he’s still waiting on scholarship offers, Hutchinson said the interest motivates him to keep going even when at times it feels like the work isn’t paying off.

Work was the name of the game for Hutchinson this spring, when the coronavirus forced him and his teammates to handle their offseason workouts independently. Hutchinson said dedication was the key to handling his duties on his own, and the time he had to himself allowed him to work on himself and correct the mistakes he was seeing.

Hutchinson is ready to bring his A-game for a Tigers’ defense that is coming off a season in which the team only gave up 15.3 points per game thanks to four shutout victories — including back-to-back blanks to open postseason play.

Hutchinson said the overall goal is for the team to stay together, build a brotherhood and reach the state championship. As for himself, Hutchinson said he wants to make a big impact for the team and do his role to the best of his ability, which he hopes leads to more interest from college coaches.

The state title dreams are big ones for Hutchinson, and the idea of being part of the Tigers’ first-ever championship team is one that drives him daily.

“It would feel amazing to bring a championship back to the city,” Hutchinson said. “Our class is full of good key players, and for us to know it’s our last ride we are going to put it all on the line.”

The wait since his junior season has felt longer than normal given everything going on, but Hutchinson remains content as he counts down the days until kickoff. He has high hopes for himself and his teammates this fall, and he’s ready to help the Tigers prove they are a team to beat once the season opener gets here Aug. 21.

“I am excited because I am grateful for us to have a season this year,” Hutchinson said. “I have full confidence in my teammates to lock in and go to work.”

Glenwood is new No. 1 in ASWA poll

After a 4-0 start to the 2020 season, the Glenwood Gators are officially AISA’s top-ranked team.

Auburn High's Syriah Daniels may only be a freshman now at Auburn, but the 5-foot-11 guard already boasts a recruiting portfolio that few can match.

Opelika clamps down on Carver in region victory

This week's East Alabama Orthopaedics & Sports Medicine Player of the Week nominees are from Auburn High, Springwood and Chambers Academy.

Opelika hosts Carver-Montgomery tonight in a matchup of two of Region 2-6A’s three teams that are still undefeated in region play.

Auburn High defensive back Amaury Hutchinson (29) wraps up Breland Manley (27) during the Auburn High vs. Murphy football game at Duck Samford Stadium in Auburn on Nov. 8.

Auburn High's Amaury Hutchinson (29) celebrates after returning an interception for a touchdown in the first quarter. Auburn vs. Jeff Davis at Duck Samford Stadium on Friday, Sept. 21, 2018.