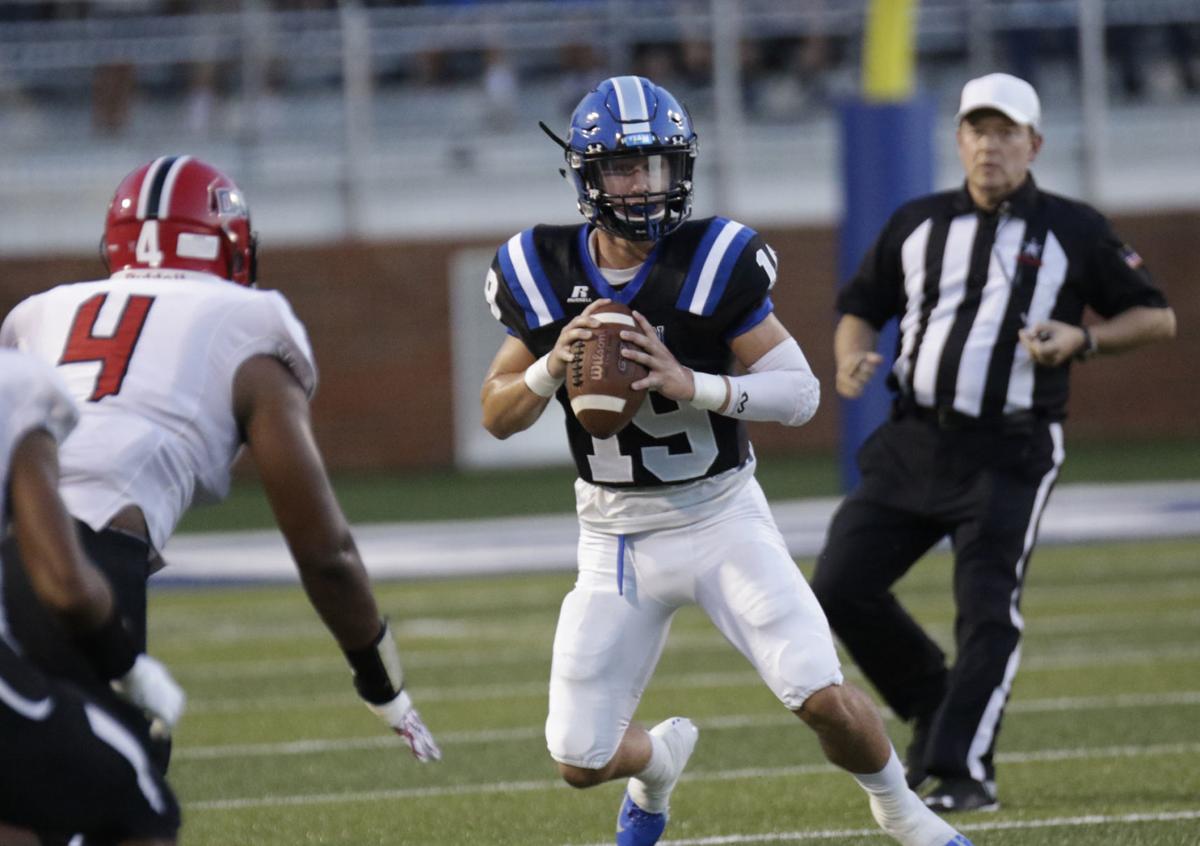 Auburn High's Griffin Speaks (19) drops back during the first half of the Auburn Tigers vs. Opelika Bulldogs rivalry showdown at Duck Samford Stadium in Auburn on Aug. 31, 2018. 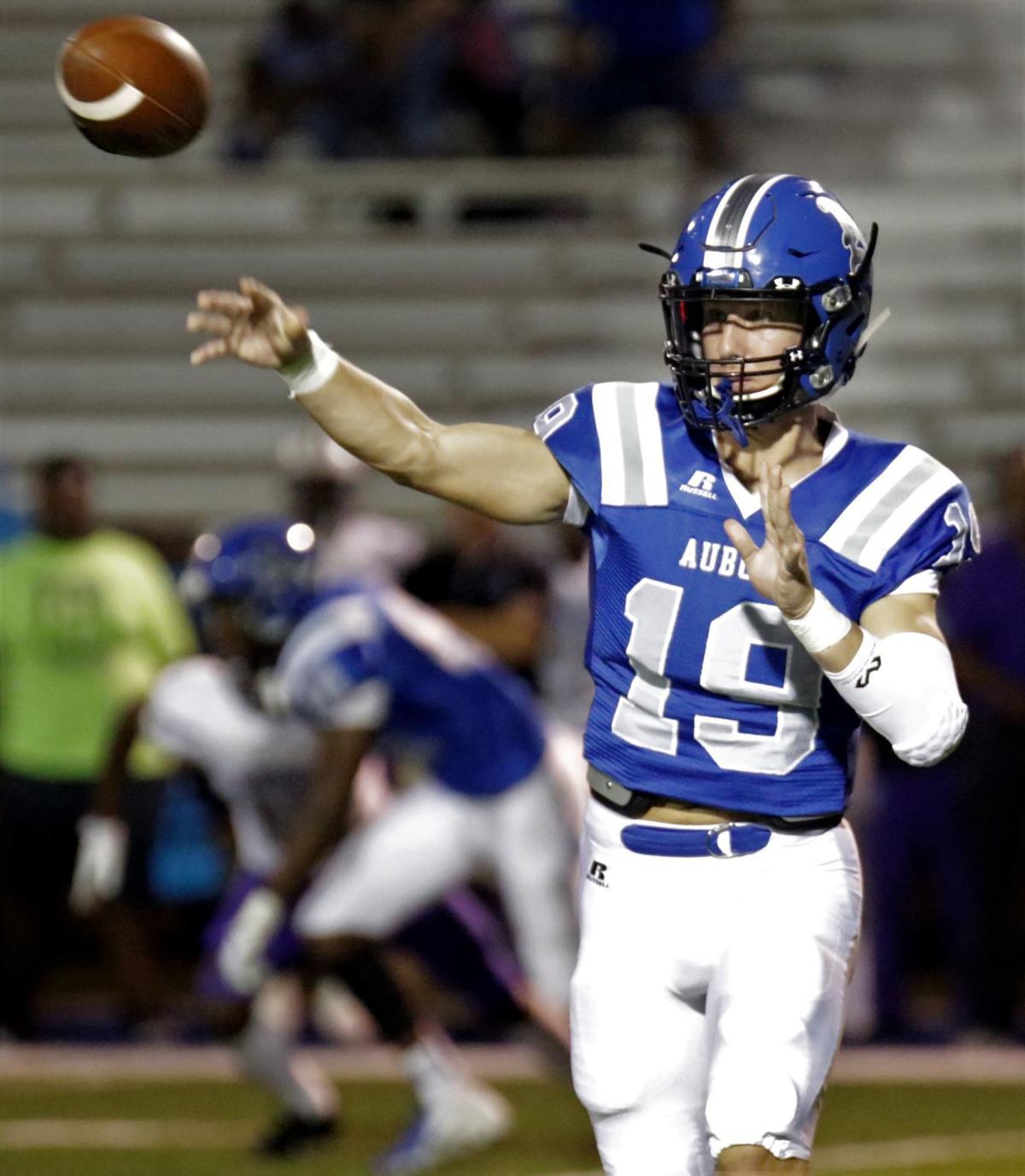 Auburn High's Griffin Speaks (19) throws the ball in the first half. of the Auburn High vs. Minor High game on Sep. 28, 2018, at Duck Samford Stadium in Auburn.

While at Auburn High, quarterback Griffin Speaks made a habit of excelling on and off the field. With one year now under his belt at Baylor, Speaks has proven that to also be the case in college.

Speaks was named to the Academic All-Big 12 Rookie Team last week as one of 10 Baylor football players selected. The list honors conference competitors who are new, incoming freshmen nominated by each institution's director of student-athlete support services, completed 24 semester hours of non-remedial coursework and achieved a cumulative GPA of at least 3.00.

“It feels really good because people usually don’t see the hard work student-athletes put in behind the scenes in regards to academics, Speaks said. “Getting recognized for my academic achievement feels really good.”

Speaks walked on at Baylor and did not see any game action in his true freshman season. Despite that, he had an unforgettable experience as part of a Bears’ squad that won 11 games and played in the Sugar Bowl for the first time in 53 years.

For Speaks, the season was nothing short of incredible.

“(It was) everything I hoped for and more,” Speaks said about his freshman season. “My favorite moment would have to be getting to experience a week in New Orleans while preparing for the Sugar Bowl. I’ve grown up watching the Sugar Bowl, and having the opportunity to practice in the Saints’ facility and meet some of their players was awesome.”

Speaks came to Baylor as a walk-on quarterback before moving to safety during fall camp. He had originally planned to also play baseball for the Bears, but this spring he decided to stick with football after Baylor football brought in new head coach Dave Aranda.

Speaks arrived in Waco after a strong senior year at Auburn. After playing defensive back for the Tigers, he stepped in at quarterback in 2018 and was a driving force offensively for the 10-win Tigers. He threw for 1,161 yards and 16 touchdowns and also rushed for 305 yards and three touchdowns in a Tigers offense that averaged just under 28.9 points per game.

Speaks was no slouch on the baseball diamond, either, hitting .247 with 21 hits, five doubles, one home run and 13 RBIs as a senior for the Tigers.

Speaks thanked his many coaches at Auburn as well as his teachers for preparing him for what he has since encountered at Baylor.

“I think Auburn High did a tremendous job preparing me,” Speaks said. “The teachers and coaches along with the endless resources we have made this transition from high school to college a lot easier.”

With his concentration set solely on football, Speaks said his main objective this offseason has been getting as big as he could without losing his speed or elusiveness as a result. There’s still about two months before the scheduled start of the year, and Speaks said he’s eager for that day to finally arrive.

“I can’t wait,” Speaks said. “Our goal right now is to just take it one day at a time and get one percent better every day. Last year that mentality led us to a 10-win season, so we all believe in it now.”

The Beulah football team is in the midst of a two-week quarantine due to the coronavirus, Bobcats head coach Matt Johnson announced Wednesday.

While most people found themselves bored during quarantine this spring and summer, Auburn High center Cort Bradley couldn’t slow down.

After losing its slated season-opening game last month, the Opelika Bulldogs have officially found a replacement.

Anyone who had to try and stop former Dadeville forward PJ Eason learned quickly that it takes a lot to slow the 6-foot-9 forward down. Luckil…

The Smiths Station Panthers will not be playing its season opener next Friday, as the Russell County Warriors have forfeited the game after mi…

Throughout his playing career, Beauregard linebacker Trent Jones has routinely ignored the scoreboard and gave his all every snap until the fi…

Juan Williams may be new to the LaFayette Bulldogs, but he’s no novice when it comes to coaching football.

Auburn High's Griffin Speaks (19) drops back during the first half of the Auburn Tigers vs. Opelika Bulldogs rivalry showdown at Duck Samford Stadium in Auburn on Aug. 31, 2018.

Auburn High's Griffin Speaks (19) throws the ball in the first half. of the Auburn High vs. Minor High game on Sep. 28, 2018, at Duck Samford Stadium in Auburn.