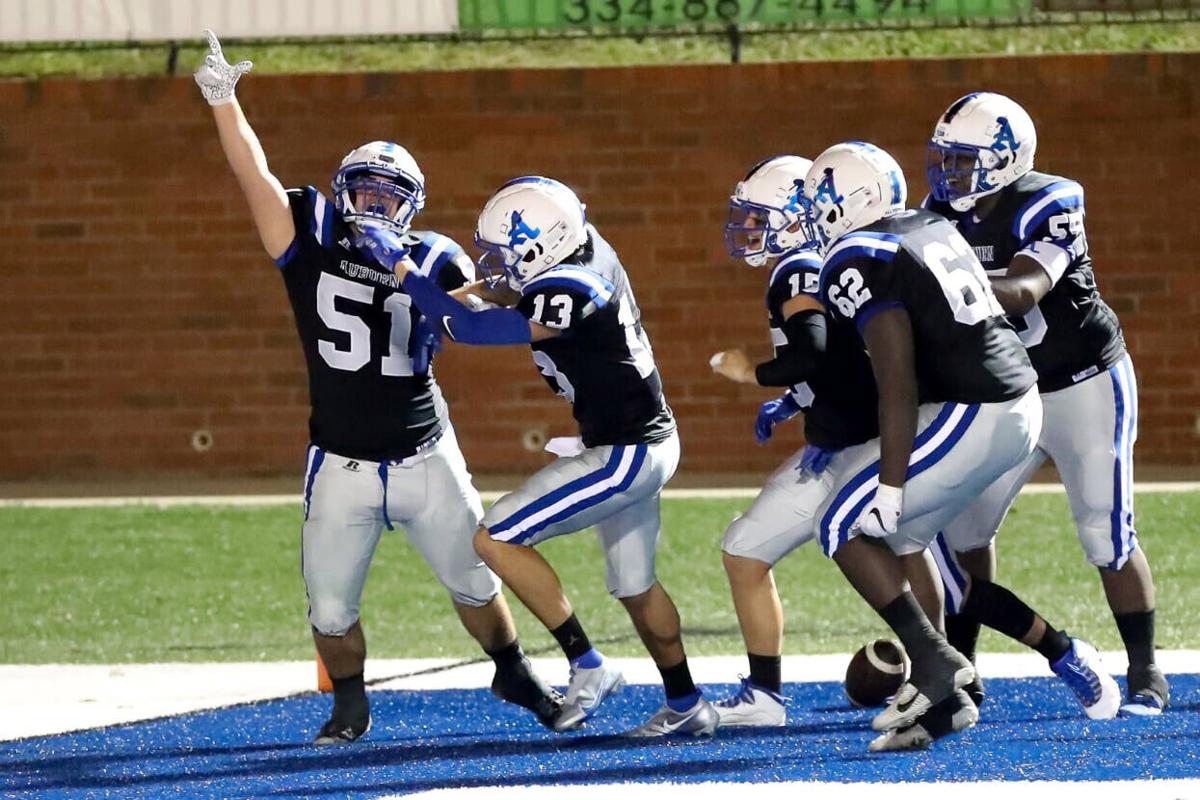 Colt Ashe (51) celebrates with teammates after scoring a touchdown in the team's victory over Jeff Davis on Friday at Duck Samford Stadium. 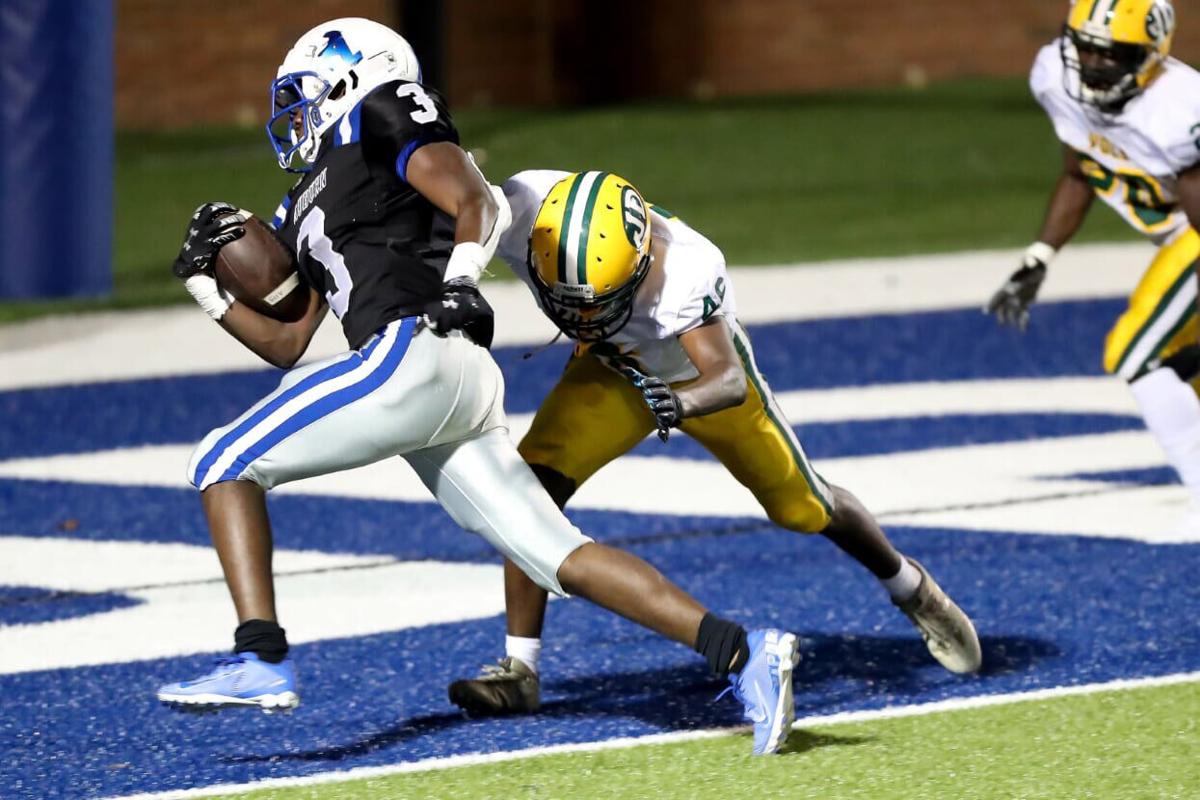 Auburn High's Amaury Hutchinson runs in a touchdown during the team's victory over Jeff Davis on Friday night at Duck Samford Stadium in Auburn. 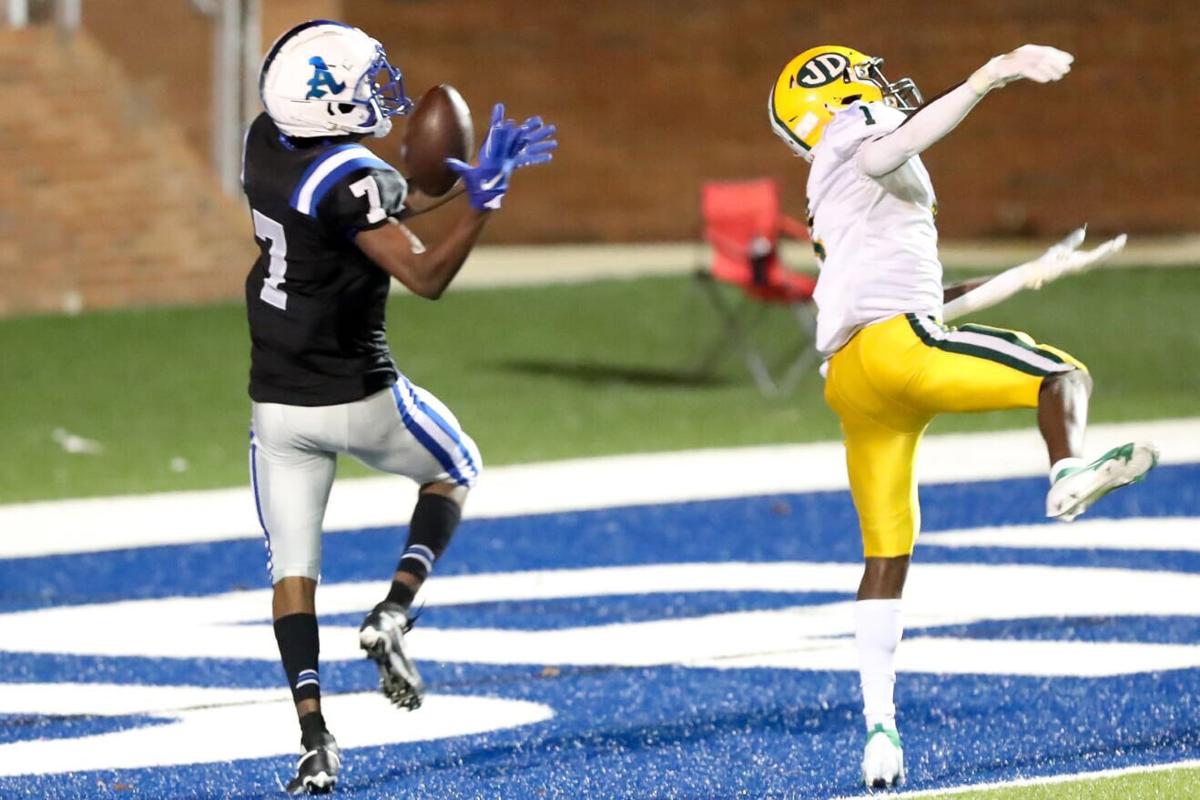 Auburn High's Ja'Zavion Ray hauls in a touchdown catch off a deflection during the team's win over Jeff Davis on Friday at Duck Samford Stadium.

The Tigers seemed to be on the verge of getting one by walking right down the field for an opening-drive touchdown against Jeff Davis. But a quick three-and-out and an up-and-down third possession meant they went into the second quarter with just seven points on the board.

Then the floodgates opened at Duck Samford Stadium.

Auburn scored 23 points in 3:25 of game time, setting the tone for what would be a commanding 47-0 rout of the visiting Volunteers.

“The big thing was finally executing,” Auburn head coach Adam Winegarden said. “I didn’t think we executed great to start the first half. We had to face some long-yardage downs. We had some missed throws, drops, that type of thing. But then, we were able to capitalize.”

Auburn put up 33 points alone in a wild second quarter that featured an onside kick, two deep bombs, a trick play touchdown pass to an offensive lineman, a touchdown catch off a deflection, an opposing punt that went for a loss of 5 yards and a safety.

Of course, there had to be a safety. The Tigers’ dominant defense has now gotten one in each of its first five games of the season. This time around, Cameron Reese came up with the scoring takedown that capped Auburn’s quick scoring outburst.

“I thought our defense played extremely well,” Winegarden said. “We’ve played pretty good defense all season. This was our second shutout. Defense translates to offensive points, so they were able to pin the other team deep and give us a short field to score points on offense.”

Auburn’s second touchdown — one that followed an opening-drive scoring march led by the backfield trio of Amaury Hutchinson, Tristian Pittman and Brad Warren — came directly off the defense’s efforts. On the first play of Jeff Davis’ second possession, Quay Nelms came up with the first of his two interceptions on the night.

The Tigers needed a few third-down conversions and a fourth-down pass interference against Jeff Davis to find the end zone early in the second quarter, with Hutchinson scoring from seven yards out.

Auburn immediately dialed up a successful onside kick, which has been one of its staples under Winegarden.

“On tape, we saw something and we felt like that one particular side, the left side, could be open,” Winegarden said. “We try to steal possessions in games, so this was a time for us to do that. We like to do that in each game to some degree on special teams, when we get a chance to.”

With the Volunteers reeling from the surprise onside kick, Auburn immediately called for quarterback Matthew Caldwell to find receiver Ja’Zavion Ray deep downfield. Ray couldn’t quite find the end zone, but Caldwell finished the job a play later with a 1-yard sneak for six.

Despite the successful onside kick, Auburn hadn’t received its most favorable bounces of the night quite yet. One of those came after a three-and-out from Jeff Davis — which then watched a short punt recoil so far backwards, it had to be downed five yards behind the line of scrimmage.

The Tigers then called a trick play that freed up offensive lineman Kolt Ashe for an easy reverse pass from receiver Bryson Clague. Auburn’s defense would then come up with Reese’s safety and an interception from Hutchinson, with the latter play setting up a 37-yard touchdown pass from Caldwell that was deflected off a Jeff Davis defensive back and into the hands of Ray.

The Tigers tacked on three more points just before halftime on a short field goal, and that would be the end of the night for the first-team offense. The strong-armed Caldwell finished the half with 193 passing yards on just nine completions.

A running clock second half was much calmer for the scoreboard operator, as the Tigers would get another pick from Nelms and a 15-yard touchdown pass to James Hume from backup quarterback Clyde Pittman.

While the blowout win pushed Auburn to a perfect 5-0 overall record and a 3-0 mark in region play, Winegarden still believes his Tigers can play a much cleaner game.

“We’ve got to get a lot better fundamentally,” Winegarden said. “We need to be in better shape, I think, physically. The past two weeks, we haven’t gotten a chance to play a really complete game. We have a lot of mistakes to shore up in order to be able to execute at a high level.”

Auburn will get an extra week to clean up those mistakes, as its scheduled non-region game at Bob Jones for next Friday was one of two canceled by the Patriots due to COVID-19 concerns. The Tigers will return to action Oct. 2 for a massive region contest at Central-Phenix City.

Auburn High has won the region championship for the first time in Class 7A.

Watch now: Loachapoka's Nick Farrow all about family and football

Farrow made the most of every carry he got in the Indians' shutout victory over Verbena. When the game was over, he had four carries for 149 yards and two touchdowns.

This week's nominees are from Chambers Academy, Auburn High and Lanett.

Former Beauregard running back La’Damian Webb had shown flashes in his first three games for Florida State. On Saturday, the sophomore truly shined.

The AHSAA announced on Thursday attendance restrictions for its football postseason this November and December, including limitations for the Super 7 championship series.

The Opelika Bulldogs and Lanett Panthers are once again on the rise in the latest Alabama Sports Writers Association poll.

These are the kind of games the Lanett football program has lived for.

Colt Ashe (51) celebrates with teammates after scoring a touchdown in the team's victory over Jeff Davis on Friday at Duck Samford Stadium.

Auburn High's Amaury Hutchinson runs in a touchdown during the team's victory over Jeff Davis on Friday night at Duck Samford Stadium in Auburn.

Auburn High's Ja'Zavion Ray hauls in a touchdown catch off a deflection during the team's win over Jeff Davis on Friday at Duck Samford Stadium.