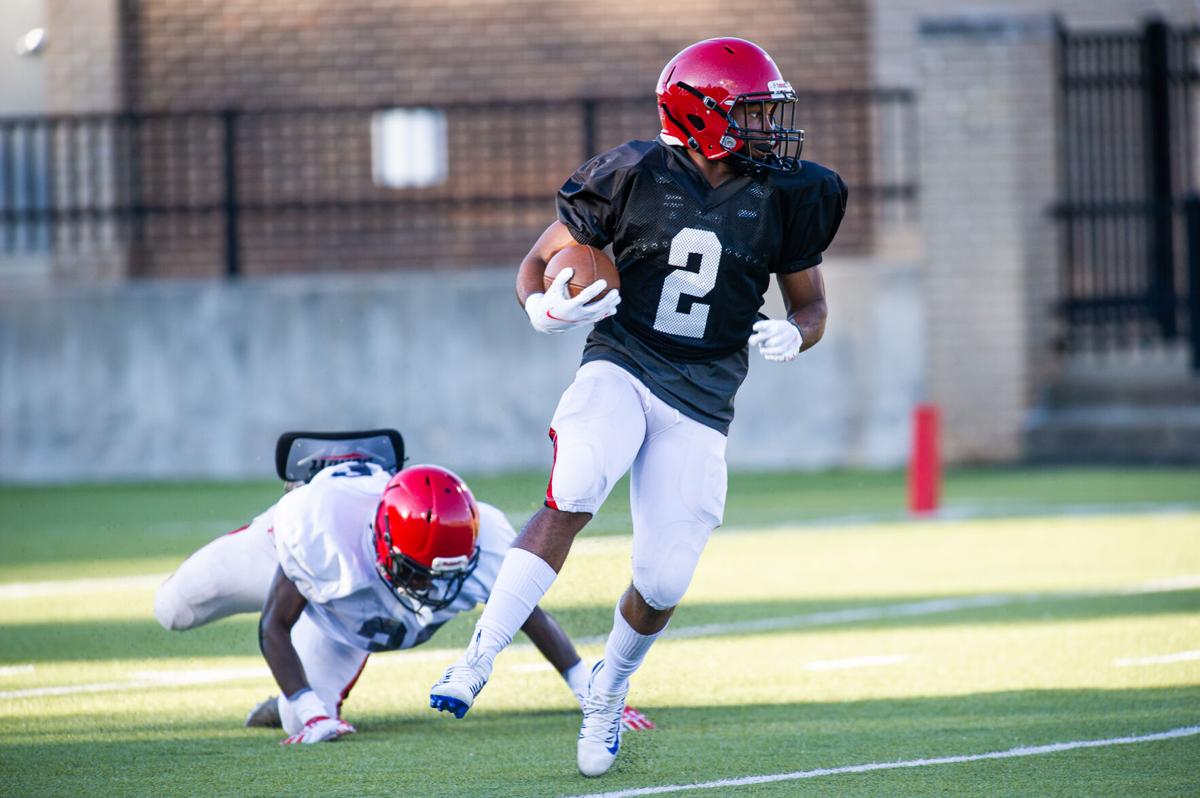 Opelika’s Jarell Stinson (2) carries in the first half of the team’s scrimmage Friday in Opelika. 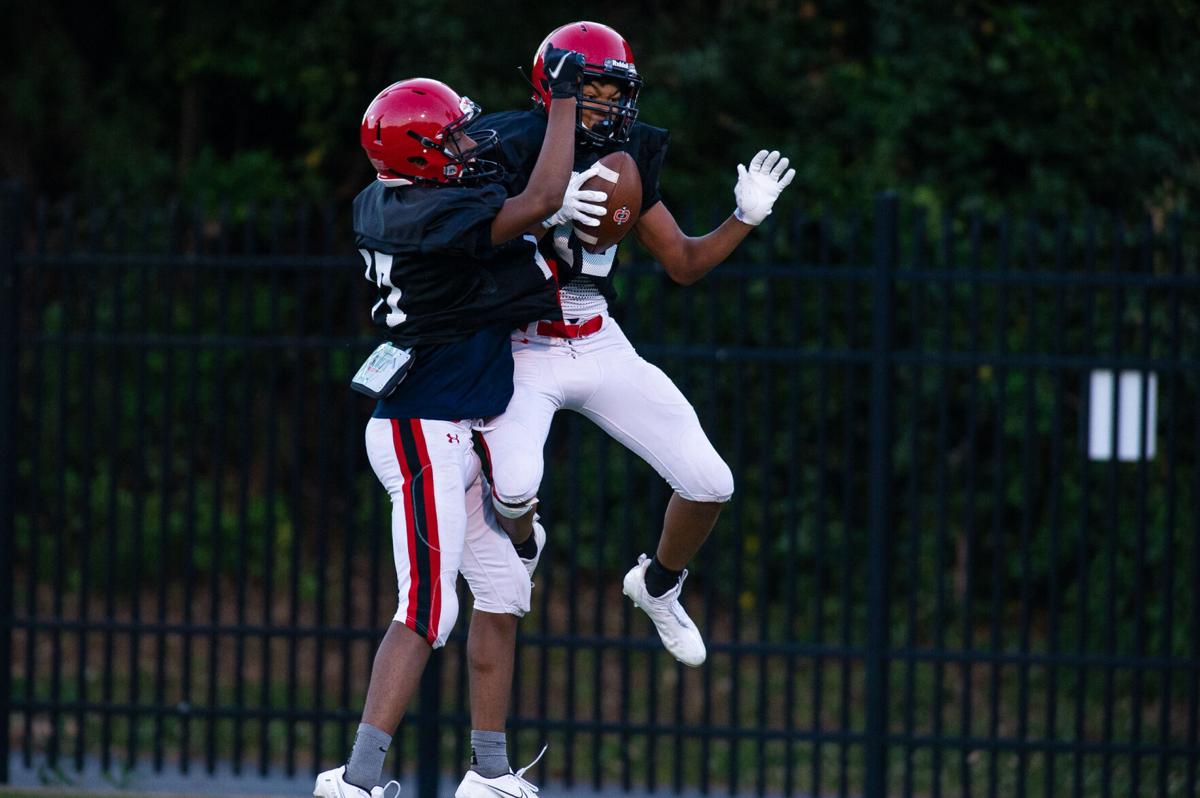 Opelika's Christian Wright (12) celebrates after a touchdown catch at the team's spring scrimmage Friday in Opelika. 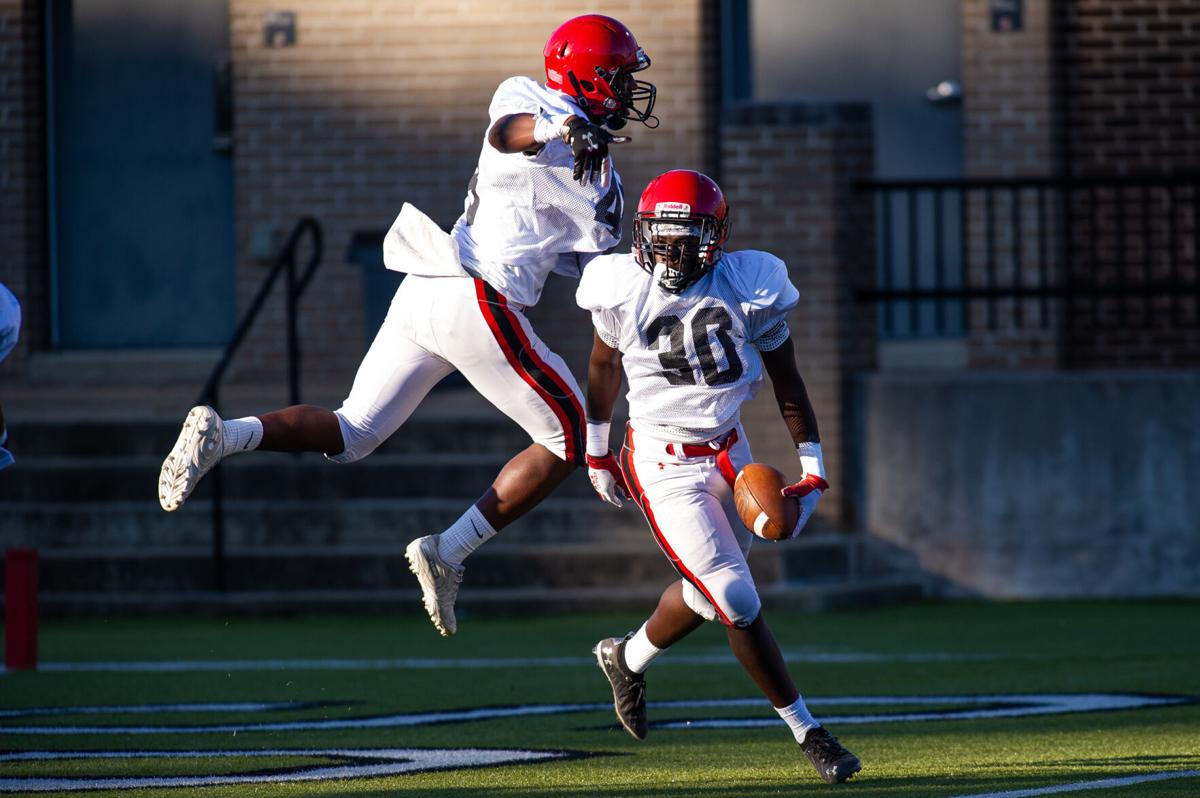 Opelika's Thomas Chaney (30) celebrates after a pick-six in the first half of the team's scrimmage on Friday in Opelika.

With every deep pass, nifty juke or strong tackle, the Opelika football team on Friday showed off the progress it’s made this year during spring practice.

Sports teams across America are gearing up for a fall at full capacity, full speed and full go. And the Bulldogs are trying to make sure they’re at full throttle, too, the next time they step on the playing field under the lights.

Opelika’s Red team beat the Black team 46-27 on Friday night in an intrasquad scrimmage at Bulldogs Stadium, which capped spring ball for Opelika and moved the team one step closer to kickoff in 2021.

“I thought we did some good things and did some bad things,” Speakman said. “It was a lot of fun tonight. We kept everything real limited to make sure everyone kind of knew what was going on. We brought our future ninth-graders up with us, so their heads were spinning a lot.

“But what I really wanted to see was a lot of kids just running around and making some plays and I think we saw that tonight.”

Everyone on the roster got the chance to play as part of the plan — and some wasted little time to make a moment on the field.

Senior defensive back Chaney Thomas ran back a pick-six for Red to end the opening series, marking the first of three interceptions by the defenses on the night. Not to be outdone, the offenses pieced together their own big plays, the longest being an 87-yard touchdown pass from JT McArdle to Jayden Stinson for a Red touchdown in the second quarter.

Roman Gagliano and Bryce Speakman also both threw touchdown passes of their own in the first half. Taylor Love broke loose for a 51-yard touchdown run for the Red team for the game’s first offensive touchdown, and for the Black, Christian Wright scored the team’s first touchdown on a 30-yard reception from Gagliano.

Early in the second quarter, Jamori Thomas took a short pass from Bryce Speakman and raced with it the rest of the way for a 56-yard touchdown connection for the Red team.

“Last year, we didn’t even get a spring, so this year it was really good,” Erik Speakman said of the progress he’s seen from his team. This spring was different for Opelika in a lot of ways, with the spring game included, with this marking the first time the team has run an intrasquad scrimmage instead of a jamboree with another opponent. Doing that, though, allowed the coaches to control the game more and make sure they get to see some things they need to see, the coach said.

“We were able to really just focus on us and the fundamentals,” Erik Speakman said. “For the first week, we didn’t even run a play of 11 on 11. We did everything in group work and fundamental stuff and so we were able to develop some depth in certain situations and certain areas.

Now, the team’s charged with getting bigger and stronger over the summer before getting back to work in the fall.

It seems everyone around is getting back to full speed ahead, and Opelika’s bent on keeping stride with them.

NBA plans to start the new season in October

"I said that my dream was to play both football and baseball at a school that is great academically but also is competitive. It’s truly a dream come true."

Opelika’s Jarell Stinson (2) carries in the first half of the team’s scrimmage Friday in Opelika.

Opelika's Christian Wright (12) celebrates after a touchdown catch at the team's spring scrimmage Friday in Opelika.

Opelika's Thomas Chaney (30) celebrates after a pick-six in the first half of the team's scrimmage on Friday in Opelika.