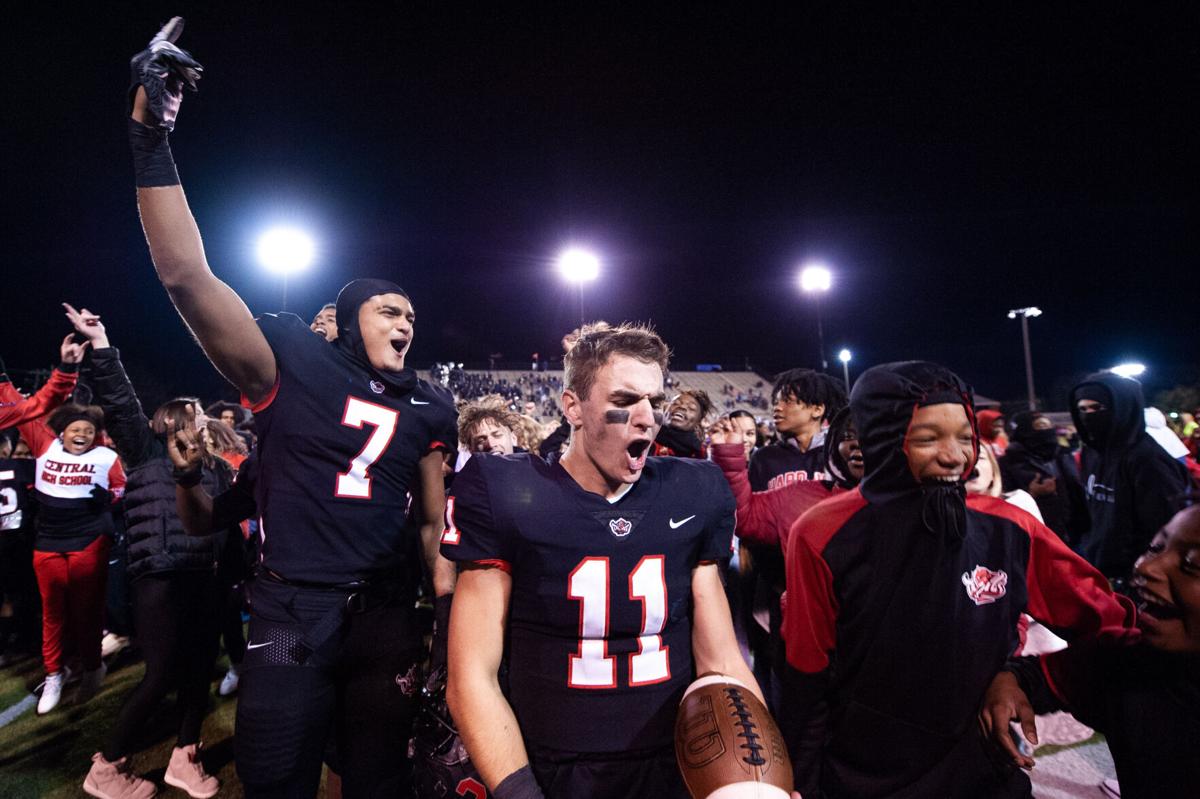 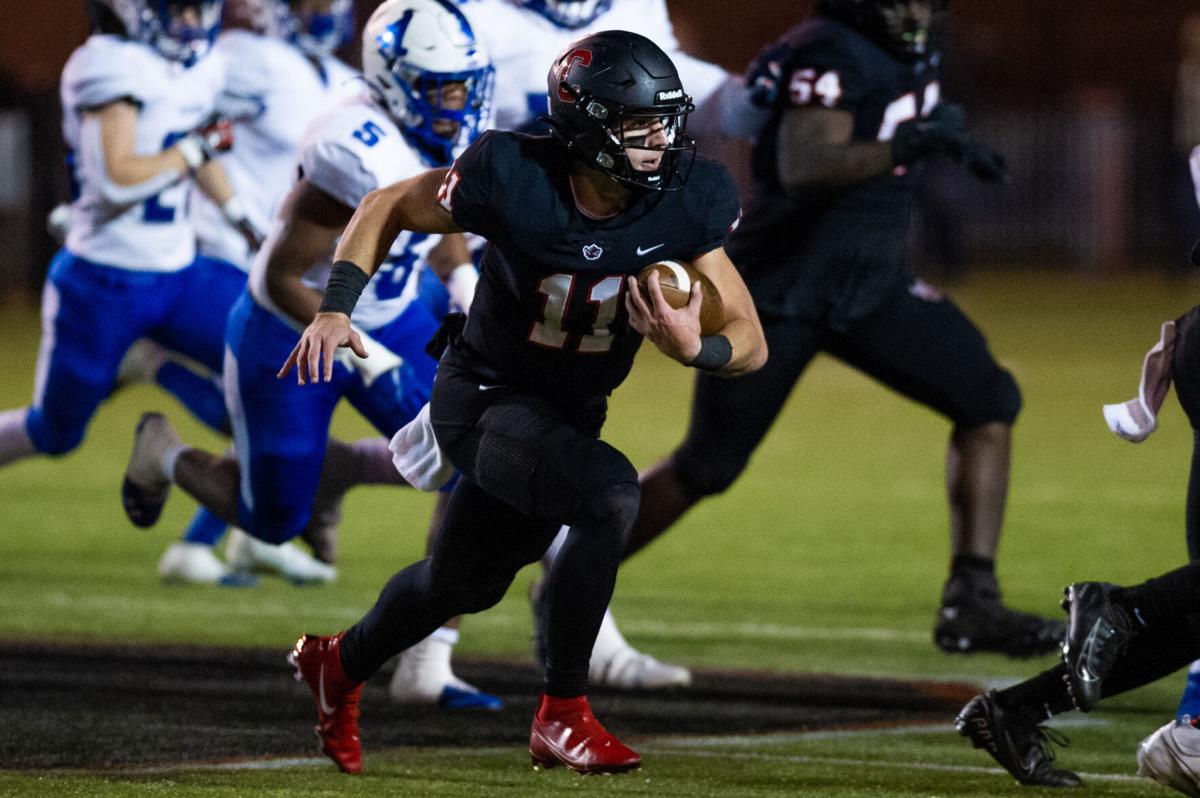 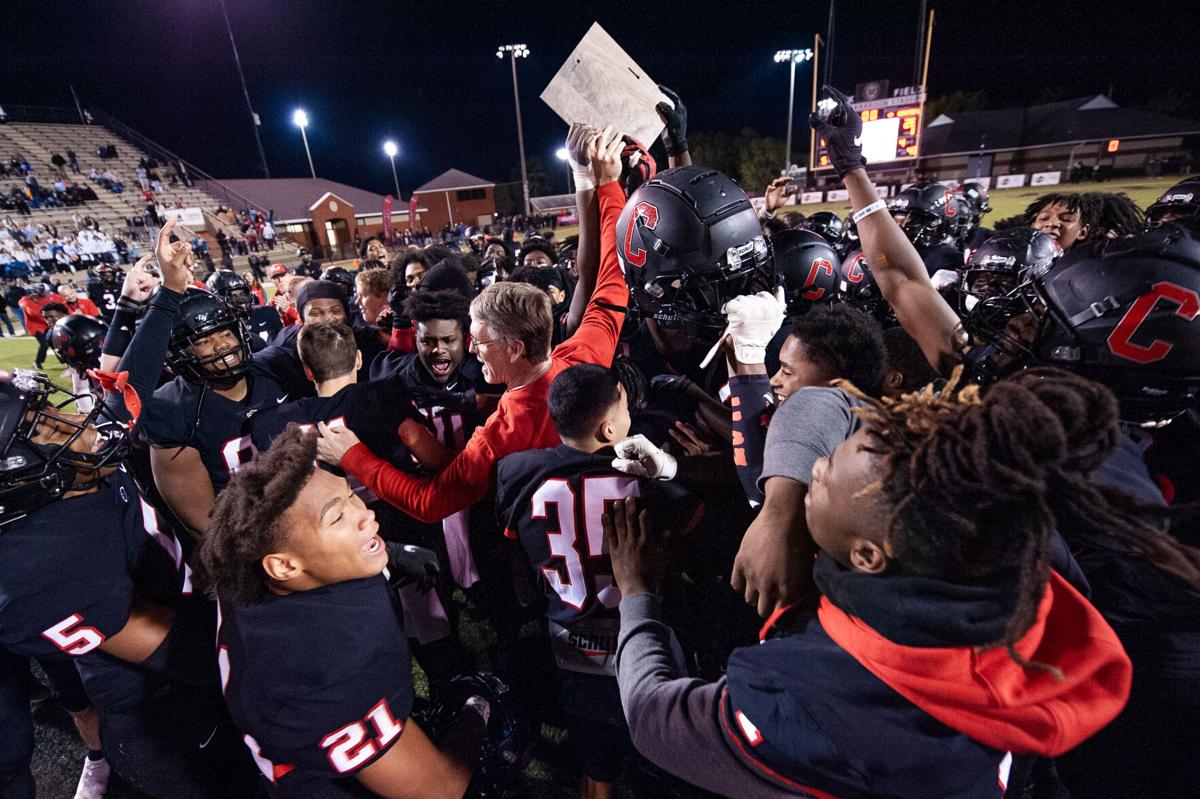 The Central-Phenix City Red Devils celebrate after punching their ticket back to the Super 7 in a Class 7A semifinal victory over Auburn High on Nov. 19 in Phenix City.

Although the matchup in Wednesday’s AHSAA Class 7A state championship game is nothing new, this year’s edition of the game promises to be.

Central-Phenix City (13-0) and Thompson (12-1) are set for their third showdown for the state title in four years, though the Red Devils’ program is noticeably different compared to when the two squads last met in 2019. Central has gotten itself back to the Super 7 with an overhauled team led by second-year head coach Patrick Nix, who is looking for the third state championship of his coaching career.

When the two teams square off at 7 p.m. CT in Birmingham’s Protective Stadium, it will be the culmination of countless hours of work by the Red Devils over the last two years.

Nix’s first year in Phenix City had its growing pains in part due to the coronavirus pandemic, which significantly limited the time Central’s new coaches could spend with their players. Those issues were minimized in 2021, which gave Nix the sense early on this group could be an extraordinary one.

“During the offseason, that January, February, March range we were seeing how hard the guys were working and how they were buying in,” Nix said. “We knew there was a lot of talent, and I think once they were around us for an extended period of time and the offseason, they just showed that they were definitely willing to do whatever we were asking them to do, buy in and just go with it.”

Nix’s Red Devils powered through the regular season and most of the playoffs with relative ease before facing a talented Auburn High team in the semifinals two weeks ago.

Central struggled to move the ball early and appeared to be in trouble well into the second half, but a long Caleb Nix touchdown run coupled with a strip sack-turned scoop-and-score by the Red Devils’ defense pushed Central over the top in a 28-17 victory.

As enjoyable as the semifinals win was for Patrick Nix, he was especially impressed by how his Red Devils never flinched.

“[We did a] great job with leadership and character and perseverance of our guys just knowing that we didn’t play very good in the first half, just settling down and just doing what we do and making plays,” Nix said. “I think just continuing to believe and have faith and not panicking [was important]. It was sort of put your nose to the ground and just keep working and not get caught up and get sidetracked by other things.”

The catalyst to the Red Devils’ return to the Super 7 — where they won it all in 2018 then lost to the Warriors in 2019 — has been dominant play on both sides of the ball.

Central’s offense has been among the most productive in the state, and through 13 games it averages 43.4 points and is just 14 points away from tying the school record for points in a season. Patrick Nix pointed to how the Red Devils have several playmakers who can make defenses pay, a group that includes quarterback Caleb Nix, running back Jaimel Johnson, and wide receivers Karmello English and Marquevious Terry.

On the other side, the Red Devils boast a suffocating defense that starts up front with a line featuring Tomarrion Parker, who entered the semifinals with 20 tackles for loss and 12 sacks. Parker wound up recovering the forced fumble in the end zone that secured Central’s win over Auburn.

The challenge for Central is to top a Thompson team that outscored opponents 598-77 this season. While the task is a daunting one, Patrick Nix explained his Red Devils have given themselves a chance to make it happen.

“We’ve talked about it and everybody knows it, but there’s no way you can win it if you’re not there,” Nix said. “We’ve just got to go and not necessarily do something different. Let’s just keep doing what we’re doing and now just go play the game.”

Thompson has a remarkable amount of talent on both sides, though offensively it starts with senior quarterback and North Carolina commit Conner Harrell. Harrell has battled injury this season but looked none the worse for wear in the semifinals, when he was 10-of-11 for 141 yards and three touchdowns to help Thompson beat Hoover 35-10.

Patrick Nix said he believes most people don’t expect Central to beat the two-time defending state champion Warriors, but that won’t affect his Red Devils. Nix said the mission is for his players to understand they don’t have to be otherworldly to have a chance; they just have to make plays whenever they get a chance.

Central has pummeled most of its competition in 2021, but on Wednesday night the Red Devils face their toughest competition yet. Although the ultimate goal is to beat the Warriors and bring another blue-map trophy back to Phenix City, Patrick Nix said he’ll be satisfied as long as his players give it all they’ve got.

“Win or lose in this kind of situation, you just want to go and be the best you can be. At this level of competition, anything can happen,” Nix said. “If we go out and do that and just control how we play, then I think no matter what we can walk off the field and feel very good about what we’ve been able to accomplish this year.”

The Auburn High Lady Tigers started things off by taking over in the second half of a 56-34 victory before the Tigers hit the floor and dominated early en route to a 68-59 win.

Auburn High alum Mohamoud Diabate announced Tuesday he is transferring from Florida to Utah. Diabate will have up to two years of eligibility remaining with the Utes.

The Central-Phenix City Red Devils celebrate after punching their ticket back to the Super 7 in a Class 7A semifinal victory over Auburn High on Nov. 19 in Phenix City.