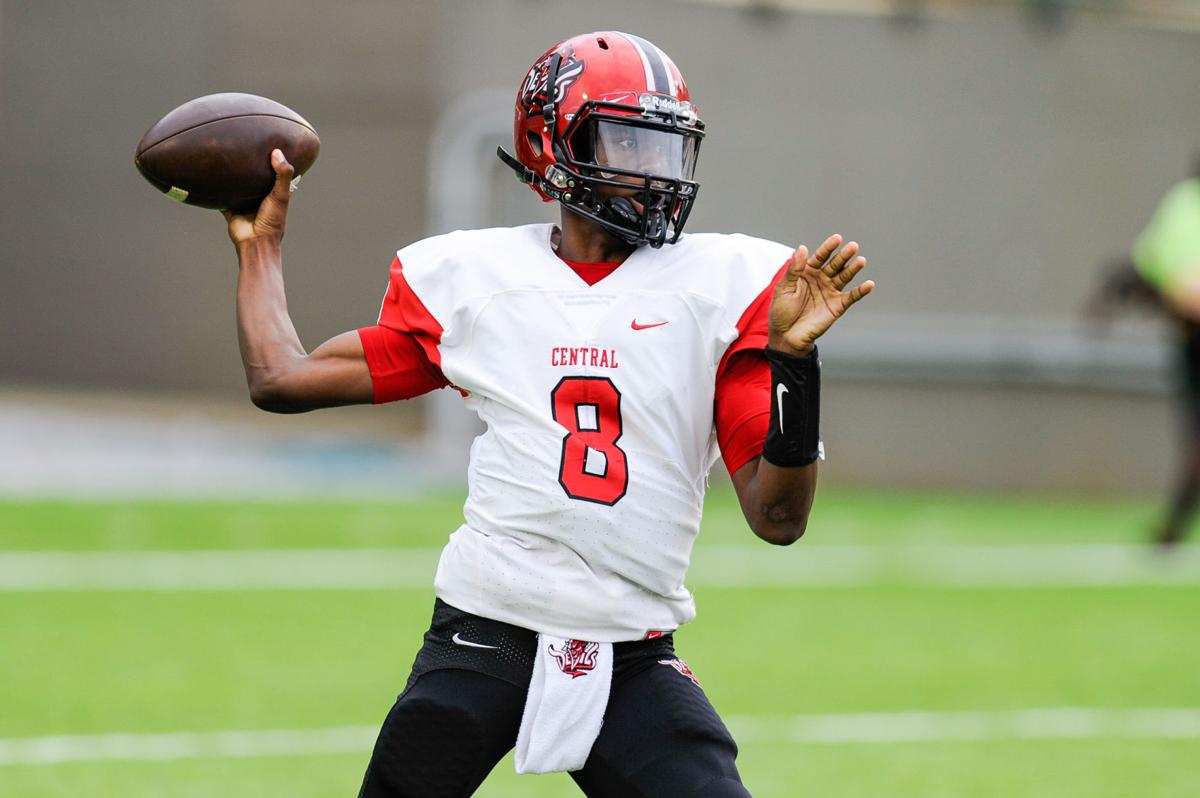 Central-Phenix City quarterback Trevion "Trey" Miles (8) throws a pass in the first half of the Red Devils' road game at Lee-Montgomery on Saturday, Oct. 12 in Montgomery's Cramton Bowl. 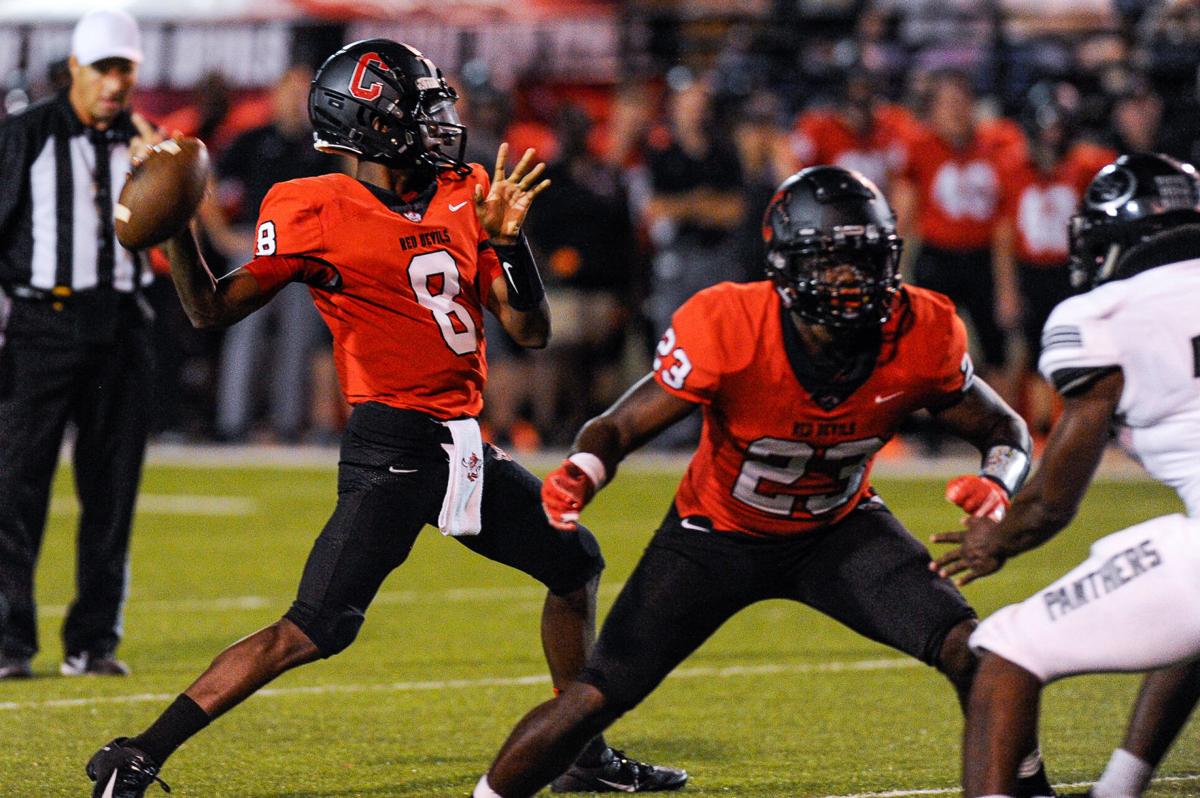 Central-Phenix City quarterback Trevion "Trey" Miles (8) throws a pass in the first half of the Central vs. Smiths Station game on Friday, Sept. 6, 2019, in Phenix City.

Once Central-Phenix City quarterback Trevion “Trey” Miles was given the chance to show out last season, it didn’t take long for the class of 2021 prospect to turn heads. That has continued into the offseason, with the latest development being a chance to show out in an All-Star exhibition.

Miles has been invited to play in the All-State Preps Senior Bowl in southeastern Pennsylvania on January 10, 2021. Miles will be on Team South as part of an exhibition featuring members of this year’s senior class from throughout the country.

“On a personal level it’s really big. I’m blessed with that opportunity during such a bad period for 2021 players,” Miles said. “My dad has always told me to be humble my whole life, but I feel like I’m slept on because I haven’t been the starter. That’s not because I can’t be but always because of some circumstances. That’s why (this invitation) is huge.”

Miles burst on the scene for the Red Devils last fall as another standout in Central’s multi-quarterback system.

Miles led the Red Devils to a come-from-behind victory against Cedar Grove (Ga.) in Central’s second game of 2019 and worked his way into splitting reps with starting quarterback and eventual Bowling Green signee Tucker Melton. Miles suffered an injury against Lee-Montgomery late in the regular season but came back strong to help the Red Devils reach the Class 7A state title game.

Miles helped the Central offense find its first sense of rhythm in the title game against Thompson and ended the loss 9-of-9 passing for 136 yards and nine carries for 14 yards and one touchdown. When the year was over, he was 67-of-91 passing with 870 passing yards, 367 rushing yards and 15 total touchdowns in seven games.

“I think he did an outstanding job. I regret that in that first game of the year against Hoover I didn’t utilize him a little bit more. After what I saw in that Cedar Grove game — how he gave us a lift when we needed it at the time — he brought something a little bit different to the table than Tucker did,” former Central coach Jamey DuBose said. “I think Trey has not even hit his upside. I watched a video he posted on a social media site the other day, and Trey’s gotten bigger. You’re not going to find somebody that will put in the hours that Trey will put in. Out of all the quarterbacks I’ve ever had, Trey is that kid who will do extra to everything.”

Miles has spent the offseason training and learning under new Central head coach Patrick Nix, who Miles compared to New England Patriots head coach Bill Belichick. Miles said he’s enjoyed getting to learn under Nix, and he feels his experience has helped him make real strides in learning Nix’s system.

Miles’ success on the field has led to scholarship offers from Murray State and Alabama State, and it appears more are on the way shortly. He said he’s heard from several prominent schools as of late, including Georgia Southern, Kennesaw State, Air Force and South Florida.

Miles credited God’s blessings for the interest colleges have given him lately.

“I have a lot to be thankful for and a lot to prove to those that doubt me,” Miles said. “Knowing that they’re even interested pushes me to do everything I need to do and more. That’s on and off the field.”

Miles has high expectations for his Preps Senior Bowl appearance, saying he wants to show onlookers that he’s a true dual-threat quarterback that can be poised in the pocket, extend plays and motivate his teammates. While his excitement about the All-Star game is hard to ignore, it’s far from his top priority at this point.

Miles and the rest of the Red Devils are officially on a countdown for about another month leading up to Aug. 21, when Central is scheduled to host Peach County (Ga.). Miles is no stranger to showing out against Peach State opponents, and he’s eager to do his part to help Central start the season strong as the team chases its second state title in three years.

“I’m ready to play another Georgia team again. It’s always interesting. Let me be clear: When I say me, I mean us. The 2021 guys all feel the same way. We talk about it all the same, how there’s no I in team,” Miles said. “It’s about one game at a time. I’m intending to push us back there to finish what we started last year.”

Area teams went 12-6 on Thursday and Friday, with the only split occurring between Reeltown and Beulah. Check out where local teams stack up in this week's Prep Power Poll.

Central-Phenix City quarterback Trevion "Trey" Miles (8) throws a pass in the first half of the Red Devils' road game at Lee-Montgomery on Saturday, Oct. 12 in Montgomery's Cramton Bowl.

Central-Phenix City quarterback Trevion "Trey" Miles (8) throws a pass in the first half of the Central vs. Smiths Station game on Friday, Sept. 6, 2019, in Phenix City.