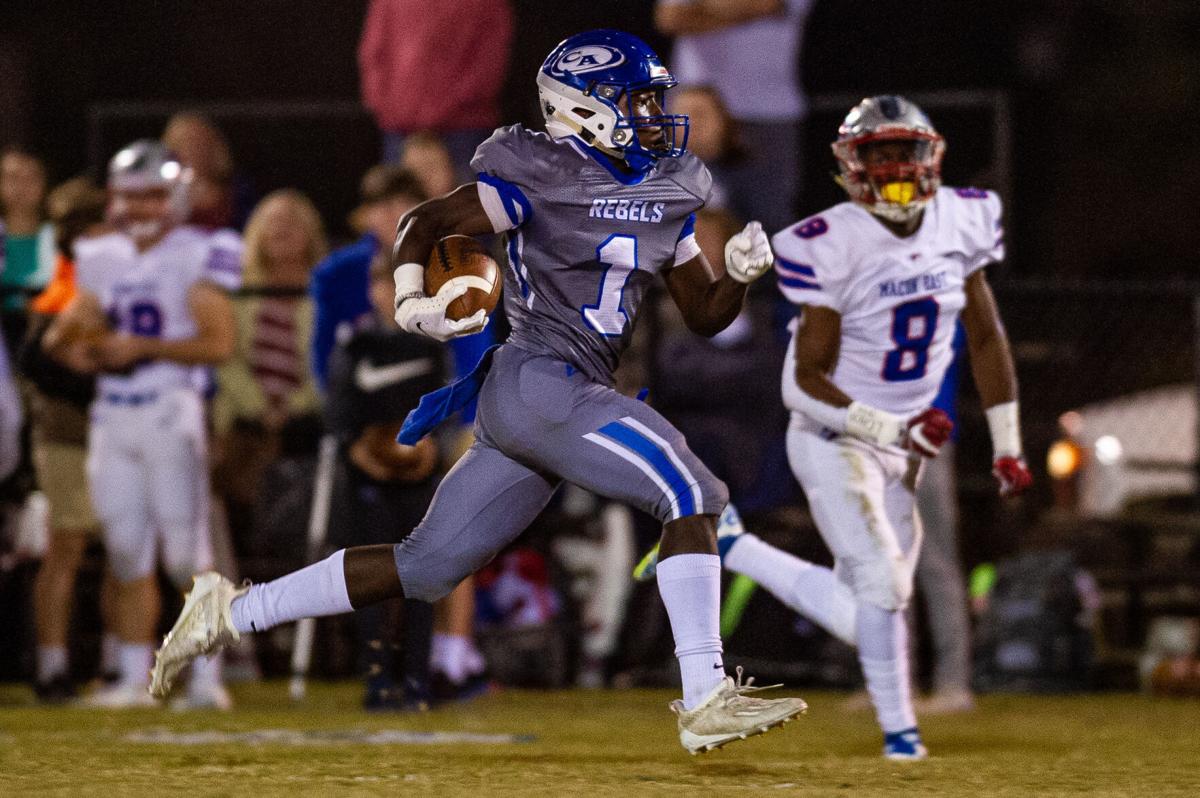 Chambers Academy's Tyrun Trammell (1) races to the end zone for a touchdown during the team's win over Macon-East on Friday in LaFayette. 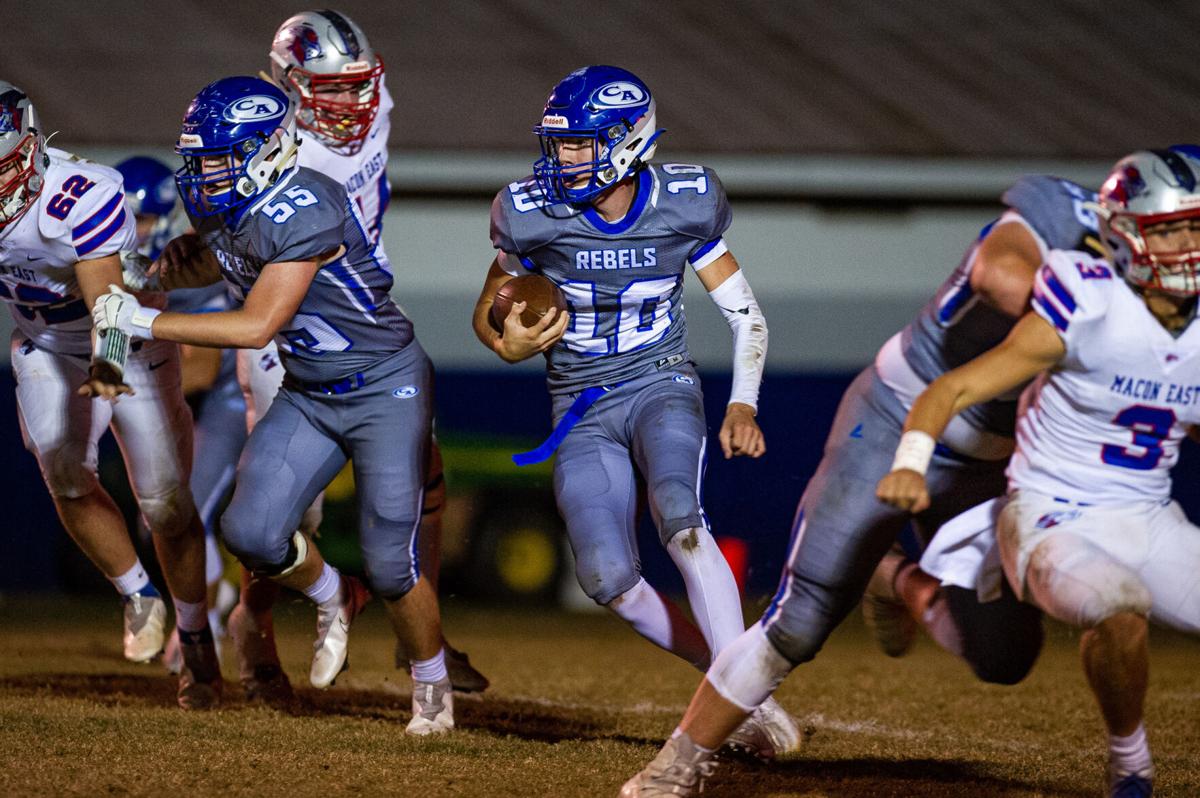 Chambers Academy quarterback Payton Allen (10) runs with the ball against Macon-East on Friday in LaFayette, Ala. 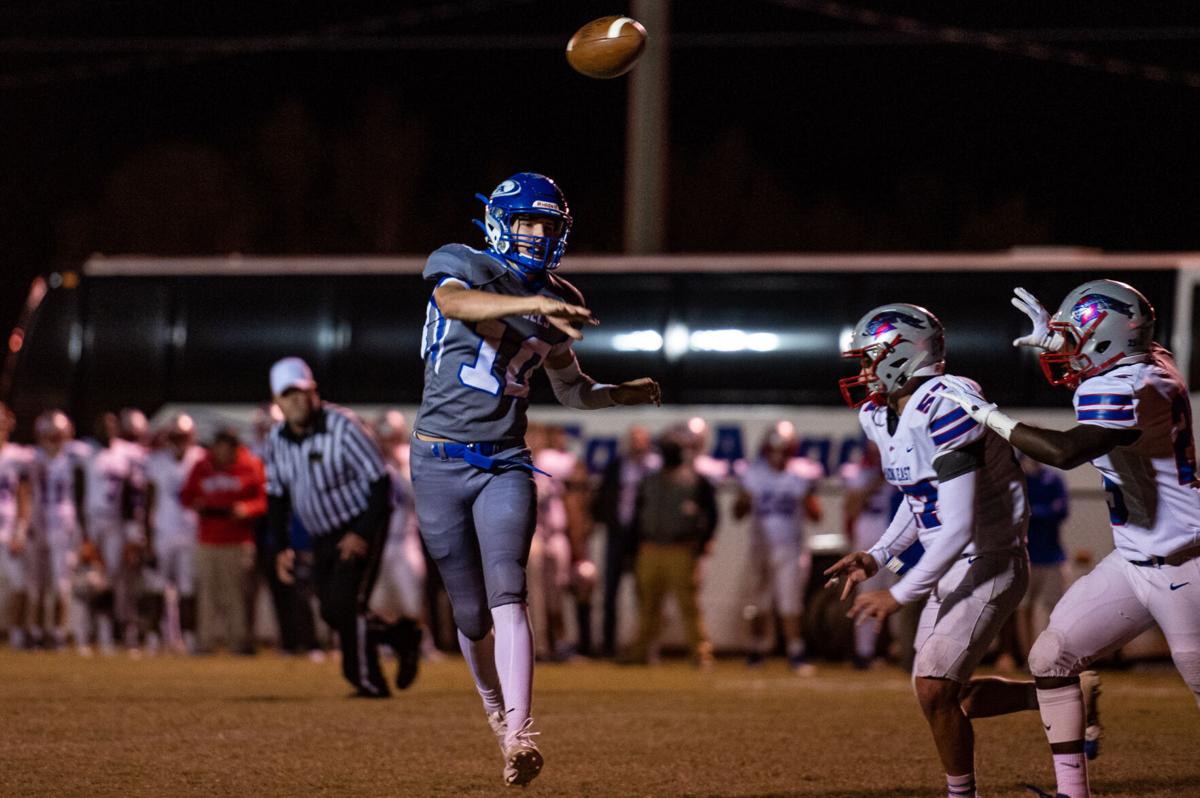 Chambers Academy quarterback Payton Allen throws a pass for a two-point conversion on Friday against Macon-East in LaFayette, Ala. 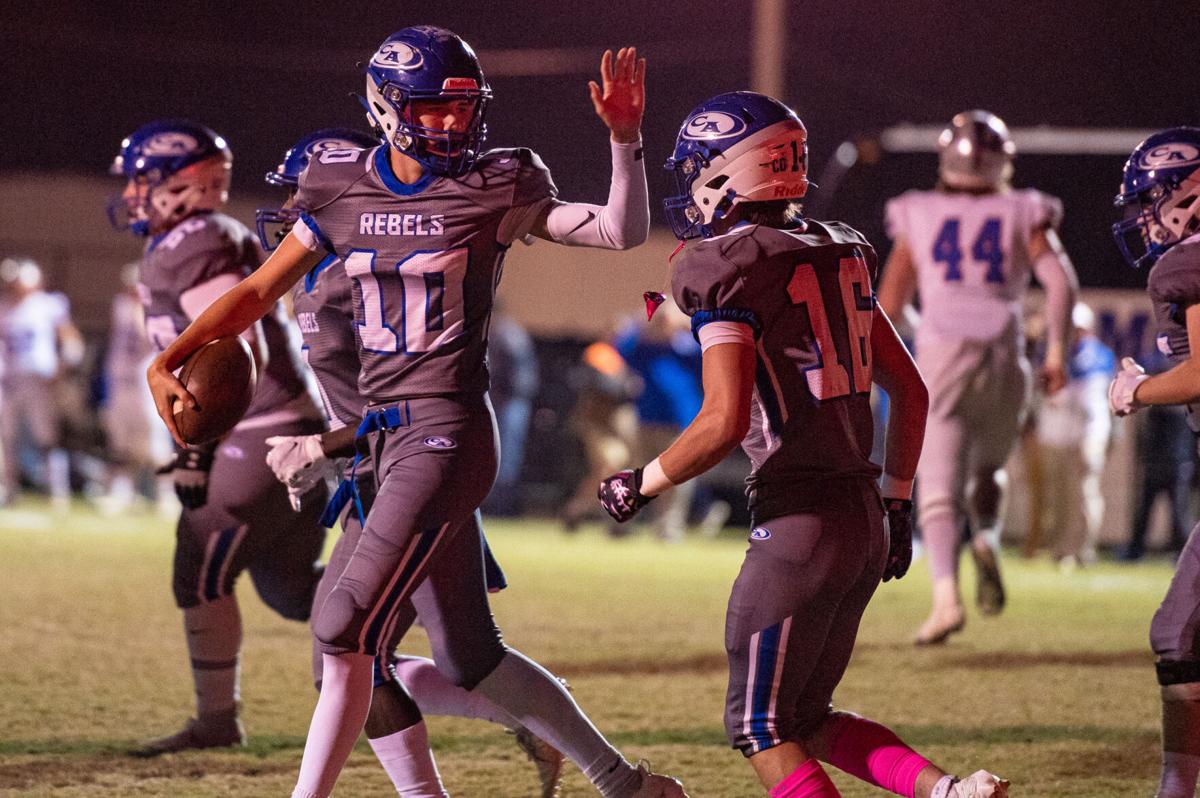 Chambers Academy quarterback Payton Allen (10) celebrates after a two-point conversion against Macon-East on Friday in LaFayette.

BY JD MCCARTHY For the O-A News

The Chambers Academy Rebels got back to playing their brand of football on Friday night — and got back in control of their region.

A disruptive defense and an explosive rushing attack carried them to a 47-6 victory over Macon-East.

With the victory, the Rebels improve to 7-1 overall and 2-1 in AISA-AA Region 1. After an upset loss to Edgewood last week, Chambers Academy’s bounce-back win puts the Rebels in first place in the standings on point differential, now with one last region game next week between them and a fifth straight region title.

After that loss, head coach Jason Allen said they wanted to get their edge back and get back to playing their brand of football — with a physical defense and a physical rushing attack — and they did that.

“We felt like we could run the football on these guys, and we wanted to do that,” Allen said over the phone after the game. “We wanted to try and punish them and challenge them up front and we did.”

Chambers Academy rushed for 436 yards and five touchdowns, in a game streamed live on the school’s YouTube page.

“The best way to get your edge back is by physically punishing people running the football,” Allen said. “I’d say that we got our edge back.”

The Rebels were led by the dynamic duo of Payton Allen and Jordan Benbrook, who each had over 100 yards on the ground and combined for six total touchdowns.

Benbrook made sure the Rebels were in control with his first touch of the game. He took the first play from scrimmage 62 yards around the right side and raced along the sideline to give the Rebels an 8-0 lead before the crowd finished finding their seats.

The Rebels showed their quick-strike ability on the next drive as well.

They didn’t throw it much, but the younger Allen made the most of his chances.

He connected with T.Y. Trammell on the third play of the drive on a quick slant and Trammell did the rest, outrunning the Knights’ defense for the 66 yard score and giving the Rebels a 16-0 lead with 6:39 left in the first quarter.

After their only three-and-out of the game on their third possession, the Rebels were able to take a commanding 24-0 lead on their fourth, when Allen took a quarterback sneak in from the 1-yard line to start the second quarter.

He finished with 117 yards and four rushing touchdowns to go along with 86 yards passing and one touchdown.

While the Rebels’ offense was firing on all gears, their defense matched the pace. Macon-East has relied on Carlos Carter all year and the running back has delivered whenever needed, but the Rebels made sure that wasn’t going to happen on Friday.

“We definitely wanted to stop (Carter). That was our whole game plan,” Allen said.

They executed their plan to perfection, holding Carter to under 100 yards rushing and never allowed the Macon-East offense to get much momentum to try and cut into their lead.

The Knights finished with under 150 yards of offense and three turnovers.

While the Rebels were held scoreless in the third, they added two more scores in the fourth quarter to protect their margin of victory, and they were both thanks to some big plays by Benbrook and Allen.

After both of their third-quarter possessions ended in turnovers, the duo made sure the fourth quarter would have a better start. They accounted for all but six yards on a touchdown drive that was capped of Allen breaking several tackles on his way to the end zone for his fourth score.

When Macon-East turned it over on its next possession, Benbrook did all the work himself, needing just three carries to go 36 yards and score his second and final touchdown of the game to give Chambers Academy an insurmountable 47-6 lead.

The Rebels will host Banks with a chance to become region champions for the fifth straight time.

Check out scenes from the Chambers Academy vs. Macon-East Montgomery Academy football game.

Chambers Academy's Tyrun Trammell (1) races to the end zone for a touchdown during the team's win over Macon-East on Friday in LaFayette.

Chambers Academy quarterback Payton Allen (10) runs with the ball against Macon-East on Friday in LaFayette, Ala.

Chambers Academy quarterback Payton Allen throws a pass for a two-point conversion on Friday against Macon-East in LaFayette, Ala.

Chambers Academy quarterback Payton Allen (10) celebrates after a two-point conversion against Macon-East on Friday in LaFayette.