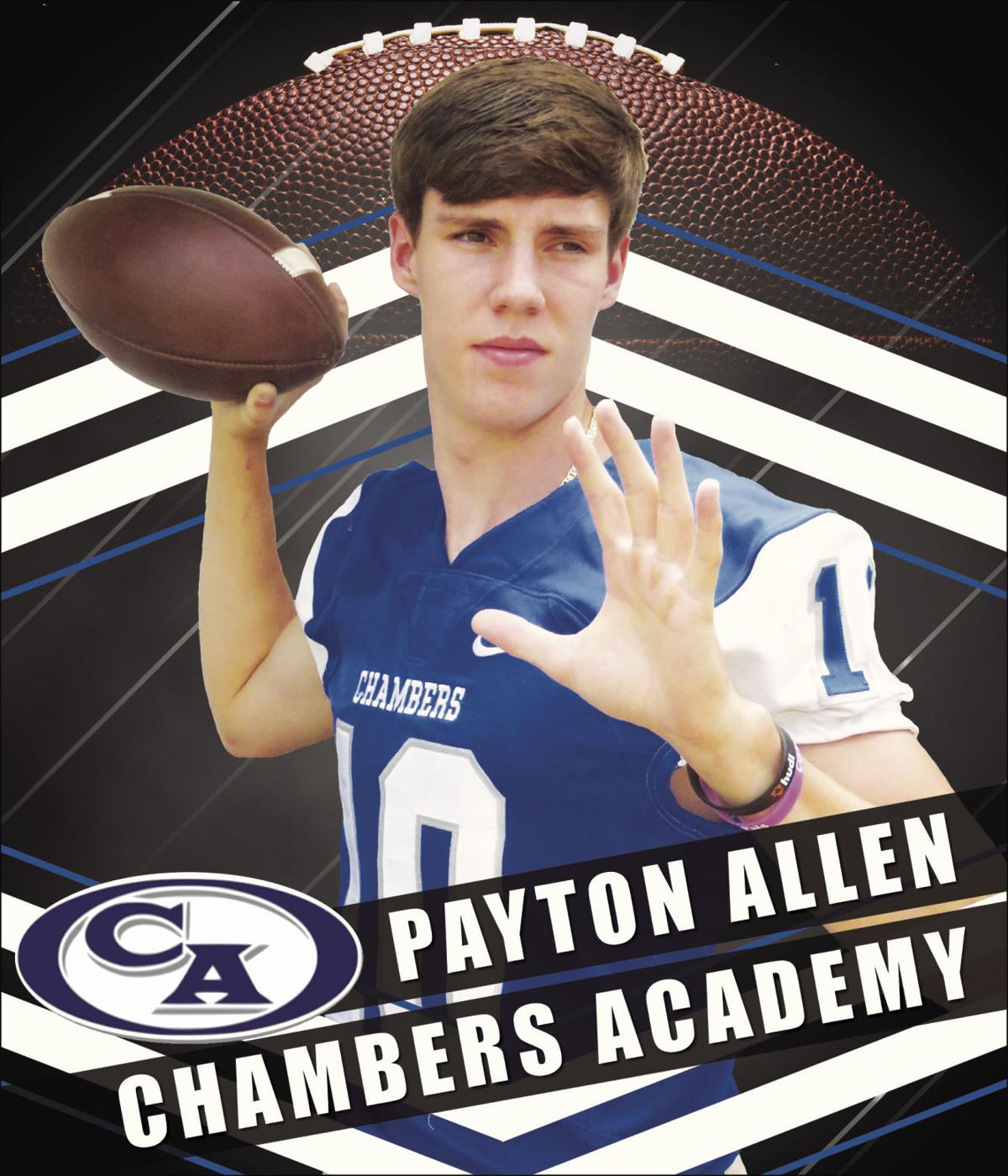 Chambers Academy senior quarterback Payton Allen is eager to return to the football field and help the Rebels reach the state title game for the sixth straight season. 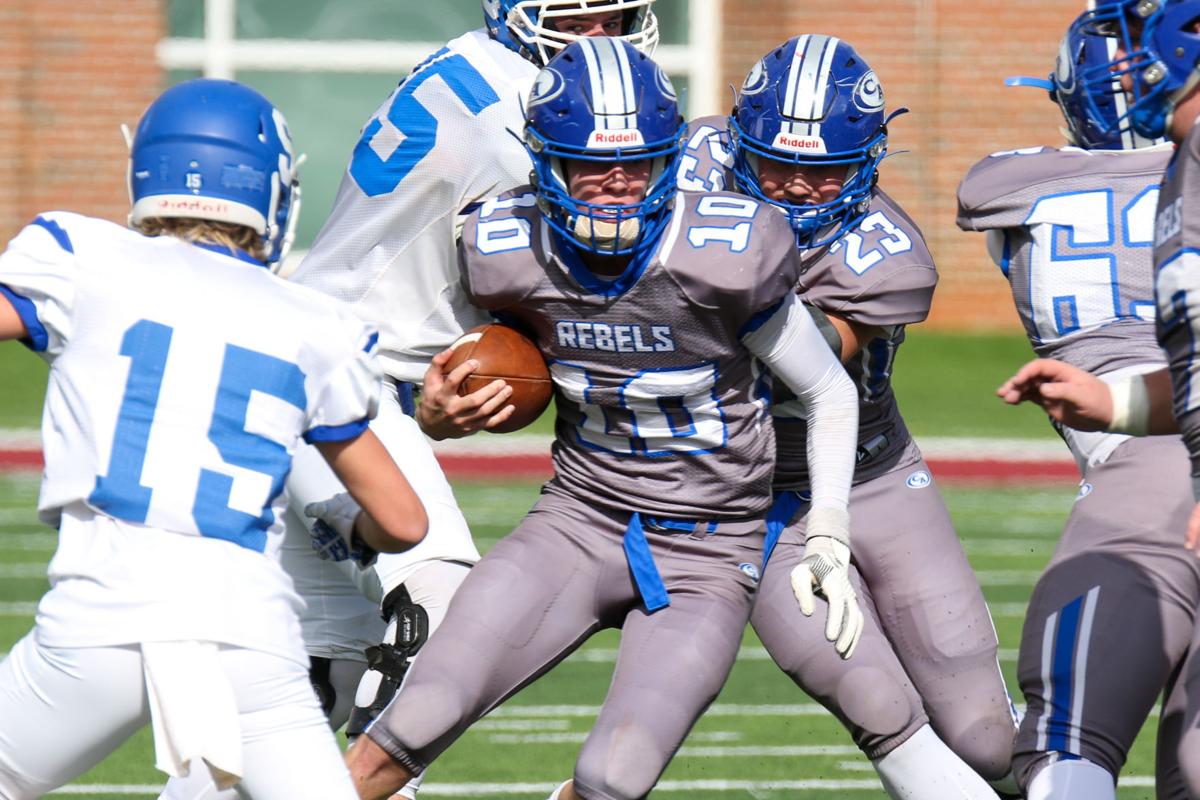 EDITOR’S NOTE: Leading up to the start of the high school football season, the Opelika-Auburn News will run features on this year’s Super 8 Seniors. Today: Chambers Academy quarterback Payton Allen.

When it comes to football at Chambers Academy, all senior quarterback Payton Allen has ever known is winning.

Allen has been a quarterback in the team’s offensive system run by his father, head coach Jason Allen, since he was in the sixth grade, and as he’s grown the Rebels have made winning the natural expectation. Over the past five seasons the Rebels have made the state championship game every year, and it was Allen who quarterbacked the team to a 22-12 victory over Crenshaw Christian in 2018 to give the program its first-ever state title.

Allen has made three state championship game appearances in his three seasons as the Rebels’ starting quarterback. And with one more run at a ring to go, he’s determined to get back to Troy again and to make the most of it.

“I’m really excited. I’ve been playing a long time here, and it’s gone by really fast. It doesn’t feel like I’m a senior. Definitely ready for this year,” Allen said. “That’s the goal: to get back to the championship game. It is a chip on the sleeve that we lost that game. We’re just coming day by day, getting better and trying to work harder than everybody else.”

Allen’s sophomore season ended with the run of his life — a 15-yard rushing touchdown in the title game to put the Rebels up 10 with a little over six minutes to go — but the year that followed featured and more and more of those types of runs from the 6-foot-4, 175-pound quarterback. The Rebels’ top two running backs from the championship campaign had graduated, and with the rushing attack suddenly in question for the first time the older Allen felt his son was more than capable of helping pull the slack.

It didn’t take long for the son to prove the father to be correct. Allen was a natural in his dual-threat role, and by the season’s end he had racked up 1,670 rushing yards and 18 touchdowns to go with his 1,321 passing yards and 16 touchdowns.

For Allen, taking on more responsibility was a natural product of being more comfortable and more mature with the task at hand.

“I think I got a little older and a little more mature as a player, and I was ready to do that, taking more of a role in the offense. I’ll be ready this year, too,” Allen said.

Allen powered the Rebels to a 9-1 regular season that was followed by two blowout victories in the postseason to clinch another trip to the AISA Class A state title game. Allen and the Rebels faced a Southern Academy squad that they beat by 21 back in September; the results this time around, however, weren’t so pretty.

Allen and the Chambers offense struggled to find consistency in the rematch with the Cougars, leading to a defensive stalemate between the two sides. Ultimately, a Southern punt-return touchdown and a late Chambers turnover proved too much, leaving the Rebels with a 14-8 loss.

Allen understandably took the loss hard at first, but Jason Allen quickly saw his son shake off the disappointment and get back to work.

“He didn’t let it define him. He didn’t let it beat him up and eat at him. I think he uses that as motivation every day,” Jason Allen said. “He feels we should’ve won the game. I’m sure Southern felt the same way. We played much better against them the first time we played them last year. I think it’s really driven him that ‘Hey, I want to get back.’”

Allen put that work on display throughout the offseason, even during the time he couldn’t be with his teammates due to the coronavirus. His father said he could see a tangible difference in his son’s preparation, whether it was the intensity of his workouts to the commitment to his diet in order to bulk up before his senior year.

As settled in as Allen should be at this point in his playing career, he and the Rebels face a considerable amount of change in 2020.

In addition to the unusual offseason, Chambers is moving up from the AISA’s Class A to Class AA, which means new opponents and the need for the team to prove themselves at a higher level. The Rebels are also expected to have several new players at receiver who both Allens hope can help open up the offense and give the senior quarterback a chance to display his big arm every Friday night.

Allen has already proven himself to be a dangerous quarterback through the air and on the ground, but he’s eager to show that to a whole new slate of opponents this fall. The excitement of a new season filled with new faces is already palpable in LaFayette, and for Allen, the chance to strap on his helmet again can’t get here soon enough.

“We’ve got some new guys coming over from other schools. I think they’re fitting in good, getting in the system and learning stuff. We definitely have a little bit more skill players this year, and I’m going to be able to use them,” Allen said. “Right now we’re just going day by day and getting better every day. The goal is to win a state championship.

“It feels like it’s been three years since I’ve played. I’m ready to play.”

Chambers Academy senior quarterback Payton Allen is eager to return to the football field and help the Rebels reach the state title game for the sixth straight season.