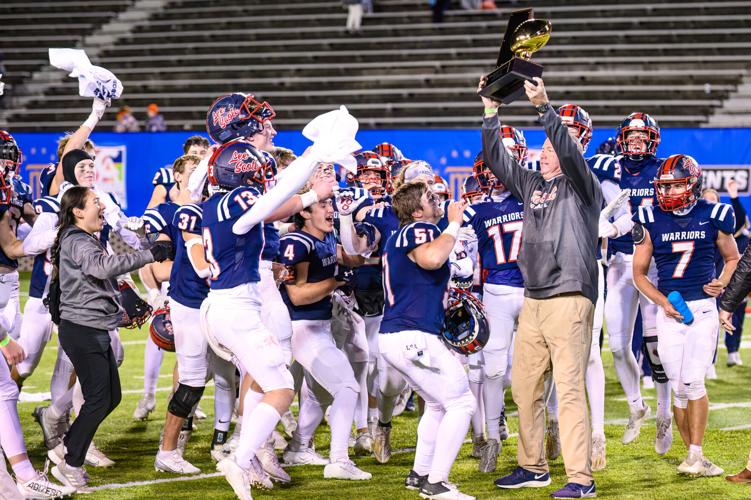 Lee-Scott head coach Buster Daniel hoists the championship trophy as his team swarms him after the AISA Class AAA championship game on Thursday in Montgomery. 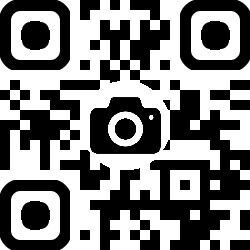 VIEW: For more photos of Lee-Scott’s win in the state championship game, point your smartphone camera at the QR code, then tap the link . 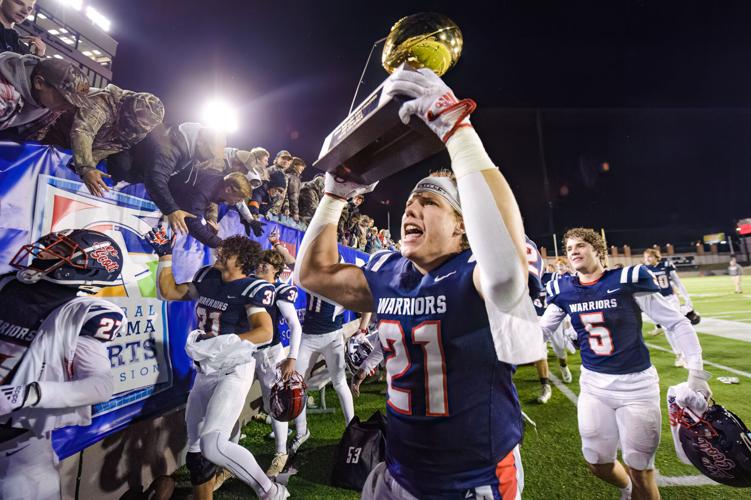 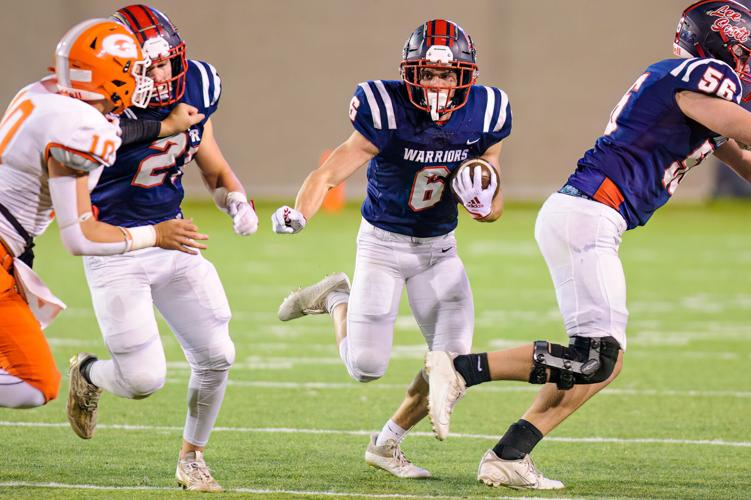 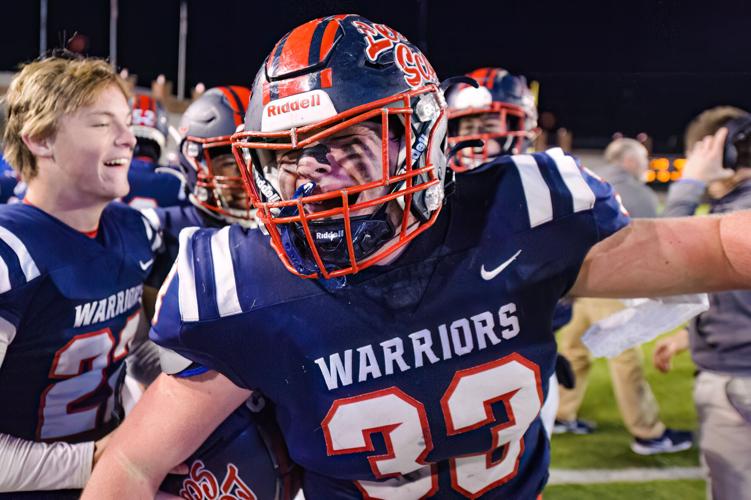 Lee-Scott’s Dalan Bush (33) celebrates after a fourth-down stop to seal the game at the the AISA Class AAA championship game on Thursday in Montgomery.

Defeating rival Glenwood 35-21 for the second time this season, the Warriors were able to hold off the Gators in what has been their closest game of the season.

Senior linebacker Dalan Bush explained it best in recapping his time as a Warrior, which has been anything but smooth. In his sophomore year, the team went 2-7, then 8-3 his junior year. This year? Perfect.

“It just means a lot to me because of how much work I put in every single year to get to this last moment, especially in my senior year,” Bush said. “I couldn’t ask for anything better. It just shows that all the hard work we’re putting in, it really does pay off.”

The players were presented with their shining trophy in the cold after pouring a cooler of ice water on head coach Buster Daniel, and after being briefly joined by some classmates who had hopped the Cramton Bowl railings to storm the field. The cold did nothing to tone down the celebrations.

Boxes of shirts had been printed in preparation for the win with ‘12-0’ showcased largely on the back. This is the first 12-win season since the Warriors went 12-1 in 1998.

The Warriors finished with 306 yards of offense, 216 on the ground. George Meyers and Jake White led the team with 46 yards apiece in 14 and seven carries, respectively. They were followed by Andrew Hahn with 44 yards in six carries.

George Meyers scored two touchdowns in his final game with the Warriors, runs of six and one yards.

“We knew coming in, it was going to be a four-quarter game and our guys haven’t played four quarters all season except against Glenwood two times,” Daniel said. “We had to ride our senior (Meyers) and he just kept churning, churning and picking up yards. He did a great job for us.”

Hahn opened the Warriors’ scoring with a 37-yard touchdown run just over a minute into the game. For the second score of the night, Jake White tiptoed 35 yards down the Glenwood sideline for six more.

The Gators’ biggest hurdle against the Warriors was the pace of their drives. Glenwood was stringing together six minutes of play while Lee-Scott could put a touchdown on the board in under two.

The Warriors’ defense was forced to carry the team throughout most of the game with the way the Gator offense was hanging on to the ball. Despite that, they were able to record three tackles for loss, two turnovers and force three punts.

Glenwood quarterback Dallas Crow was held to 14-of-34 in his passing for 173 yards, an average of 12.4 yards per completion but of just 5.1 yards per attempt. The Gators has 308 yards of offense with 135 rush yards from four different ball carriers.

Lee-Scott has made easy work of all its opponents this season, but the Gators came in prepared. Having won four in a row since facing the Warriors the first time, Glenwood had something to prove and despite not being able to finish with a win, head coach Ryan Nelson saw the championship game and the entire season as a win for the program.

“It was a success for me, just in getting the guys in the school back to football,” Nelson said of what the season meant for Glenwood. “It’s been a great journey. They gave me a heck of a ride. We had a fun time doing it. That’s one thing I’ve enjoyed about this group: we’ve had a long of fun times.”

Lee-Scott junior Jake White iced the game with an interception in the end zone, which handed the ball back to Lee-Scott with seven minutes left in the game. Quarterback Pelzer Reaves said White is one of those guys who can just find the football.

“Jake’s the kind of guy who makes those plays. I didn’t even really know he was in the game,” Daniel said. “(The staff) subs them pretty good and he just shows up.”

The Warriors were also able to capitalize on a turnover in the first quarter, a fumble on a kickoff return. Just seven plays later, Meyers went six yards to put Lee-Scott up 21-0.

Before that interception, Glenwood drove for seven minutes for 18 plays before a touchdown that brought the score to 35-21. The Gators’ staff opted for an onside kick to try and kickstart another drive, down just two scores when they were still in a position to pull back in contention. They recovered and has a first down on the Warrior 27-yard line, but White kept his head up and pulled down the ball in the end zone.

Sophomore quarterback Reaves was steady in the face of the challenge, throwing a perfect 3-for-3 and rushing for 46 yards of his own, good for third highest on the team. The highlight of Reaves’ night was a 39-yard touchdown run that looked like one that would usually go to one of his running backs.

Senior quarterback Ryan Dearing was able to enter the game briefly, recording two carries and one pass attempt before he was sidelined by the foot injury he’s worked in recent weeks to recover from. Despite the fact that the Warriors were back down to one quarterback, Dearing warmed up Reaves and offered him what advice he could.

Once it became evident that the Gators were not going to be able to pull close enough to threaten, the Warriors hit the ground again and Reaves was just in charge of managing who was to receive the handoff.

Meyers carried a lot of the running game load, but the staff were sure to distribute the ball well. Following last week’s fiasco in the rain, shifty Jonathan Meyers and Andrew Hahn were able to bring their agility back to the championship game.

Eight Warriors recorded a carry of some kind and three were targeted by either Reaves or Dearing. The largest gain of the night was a 65-yard bomb to Alex Cash that Reaves later confessed didn’t go quite according to plan.

“It’s a naked play and it’s designed to go to the wing back on a back-side drag and Pelzer saw our receiver had beat his cornerback and just threw it up to him,” Daniel said. “He actually came over to the sideline and told me it slipped but when you have a 6-foot-5 receiver, that pays off.”

On the defensive side of the ball, Cash disrupted Gator offense, recording pass break ups to Crow during drives in the second, third and fourth quarters.

Lee-Scott returns to Academy Drive with some new hardware and a title to add to the program’s list of accolades, a season of records to send their seniors out with.

Thompson's eighth-grader at quarterback won game MVP and finished 12-of-14 passing with 207 yards and five touchdowns in the state title game against Auburn High.

The Auburn High boys basketball team traveled to Georgia and came back with a win Friday night, besting Hardaway in Columbus, Ga., 70-62.

Auburn High made it to the biggest stage but couldn’t overcome a dynasty and a Thompson team on its way to a fourth consecutive state title.

Playing for it all: Auburn High takes on powerhouse Thompson in Class 7A title game

For the first time since the championship games were moved to college campuses, Auburn High School is competing for a state title in its own backyard.

The city’s school system plans to let students out at noon on Wednesday so that they can attend the games.

Auburn High is advancing to the big one — in the big stadium.

‘I love this team’: Lee-Scott headed to state after sinking Valiant Cross

“This is huge for our guys, our program and our school. I can’t tell you how proud of our guys I am.”

Lee-Scott head coach Buster Daniel hoists the championship trophy as his team swarms him after the AISA Class AAA championship game on Thursday in Montgomery.

VIEW: For more photos of Lee-Scott’s win in the state championship game, point your smartphone camera at the QR code, then tap the link .

Lee-Scott’s Dalan Bush (33) celebrates after a fourth-down stop to seal the game at the the AISA Class AAA championship game on Thursday in Montgomery.