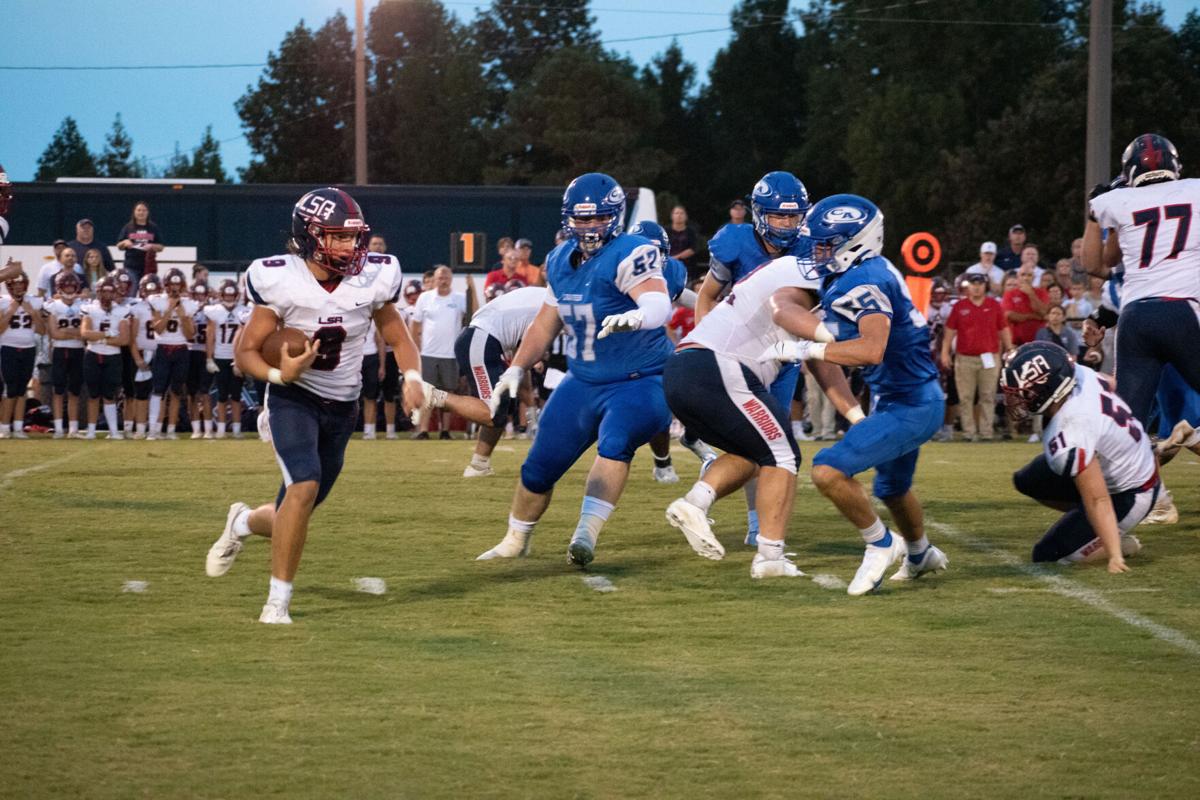 Lee-Scott quarterback Tate McKelvey runs with the ball against Chambers Academy on Thursday in LaFayette. 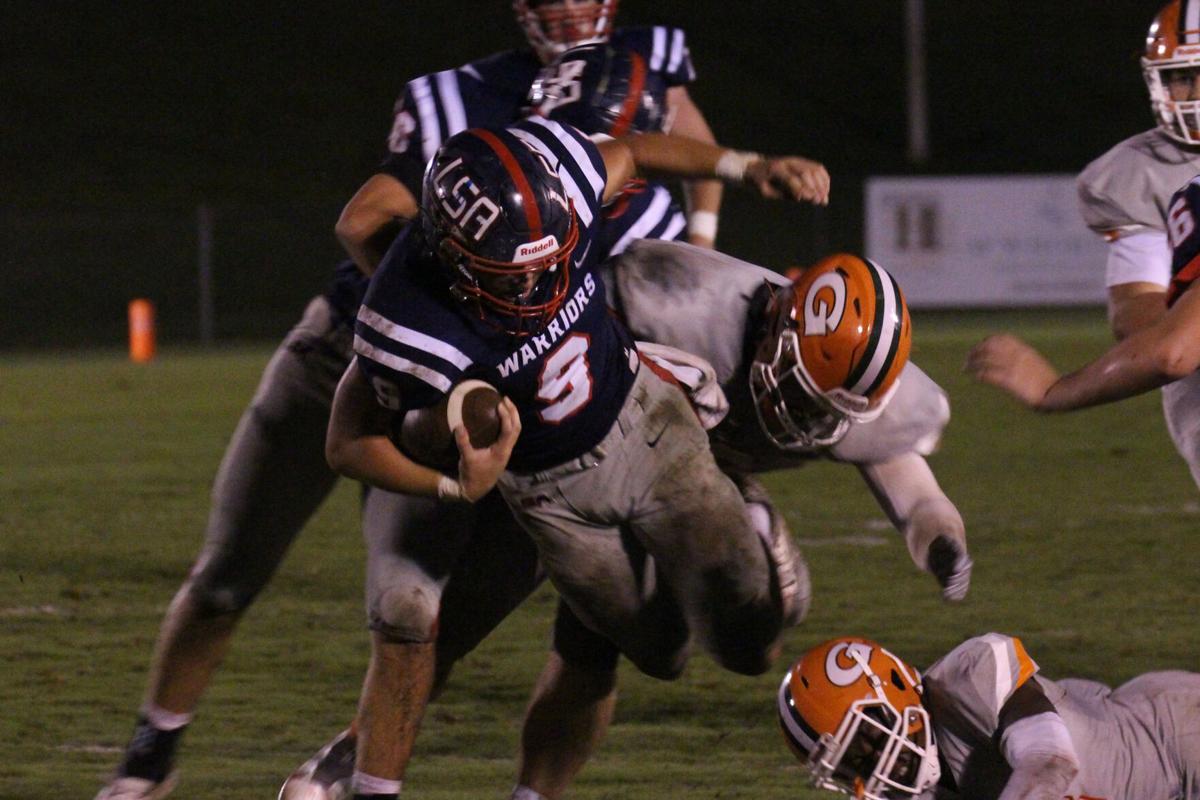 Lee-Scott quarterback Tate McKelvey dives for yards during the Warriors’ upset win over Glenwood on Sept. 3 in Auburn.

Ryan Dearing remembers what the hallways were like at Lee-Scott.

After a season-opening loss, the same old doubt crept its way around, he said.

Now the Warriors are rocking and rolling — and things have changed for Lee-Scott football.

Lee-Scott is 4-2 on the year and on its way to a winning season for the first time since 2017, bringing a new excitement and energy to the program, and Dearing’s two-quarterback dance with Tate McKelvey is one of the reasons why.

Dearing, a transfer from Auburn High, and McKelvey, a familiar face in the Warriors’ backfield, both bring something different to the position, and so far they’ve brought the offense success together.

Lee-Scott jumps back into region play Friday on the road at Valiant Cross Academy.

The Warriors’ only losses this season came to two top-five teams in Chambers Academy and Pike Liberal Arts. Between them, Lee-Scott upset then-No. 3 Glenwood for what head coach Buster Daniel called the biggest win in program history.

“It’s changed drastically since the beginning of the year. After the loss to Chambers, the team didn’t get discouraged at all, but you could kind of tell around the halls some of the students would give you crap about it and just be like, ‘Oh, this is back to old Lee-Scott,’” Dearing said honestly. “And once we beat Glenwood, I think it was just an eye-opener. It was like, ‘They’re not the same anymore.’

“Coach Daniel, he’s come and just changed the program around.”

Dearing and McKelvey split snaps at quarterback, and when Dearing comes in, McKelvey will sometimes switch to H-back and becomes one of Dearing’s top weapons.

McKelvey was the starting quarterback last season but admits that he got lazy at times without competition.

Then came Dearing which gave McKelvey some much-wanted pressure in the quarterback room.

Dearing was a transfer from Auburn High this summer, and after learning the playbook, the coaches started working him in at quarterback.

“It took a lot of time in the classroom to learn every position, H and quarterback,” McKelvey said. “I’ve been around this offense for two years now and it’s starting to build on me. I’ve gotten everything down now.”

Dearing also ran a little H-back to start the season with teammate Anderson Grimes out, but Grimes is back now, and Dearing is only used as a quarterback in the offense.

After the quarterback competition, the coaches told the pair before the season began that neither had won the starting job and that they would be swapping in and out.

“What coach (Rick) Wade told me and Tate was like, ‘Just having both of y’all on the field at the same time, we’re at a disadvantage having one of y’all off the field,’” Dearing said.

The two-quarterback system was a foreign concept at first as it was the first time that McKelvey had been in one and the first time for Dearing since middle school.

The pair says that sometimes they swap in and out evenly, but it also depends on how one is playing or when Wade needs something different on offense.

And neither has any hard feelings about splitting time under center.

“We love each other,” McKelvey said. “We sit by each other on the bus on away games. We always help each other out on plays or whenever he needs anything I’m right there with him.”

The pair even say they have a sixth sense at times as before Dearing even snaps the ball, he knows that McKelvey is probably going to be open or get open at H-back.

“Before I even snap the ball, I’m like, ‘Tate’s probably going to get open here,’” Dearing said.

And while the team has already shown that this isn’t the same old Lee-Scott by doubling its win total from last season, the Warriors will take their three-game winning streak on the road this Friday against Valiant Cross.

And no matter which quarterback is under center, they both just want to keep winning.

“A lot of us want to win,” McKelvey said. “Last year, everybody got down after a couple losses but this year we keep winning and we’re building off that success.”

Lee-Scott quarterback Tate McKelvey runs with the ball against Chambers Academy on Thursday in LaFayette.

Lee-Scott quarterback Tate McKelvey dives for yards during the Warriors’ upset win over Glenwood on Sept. 3 in Auburn.