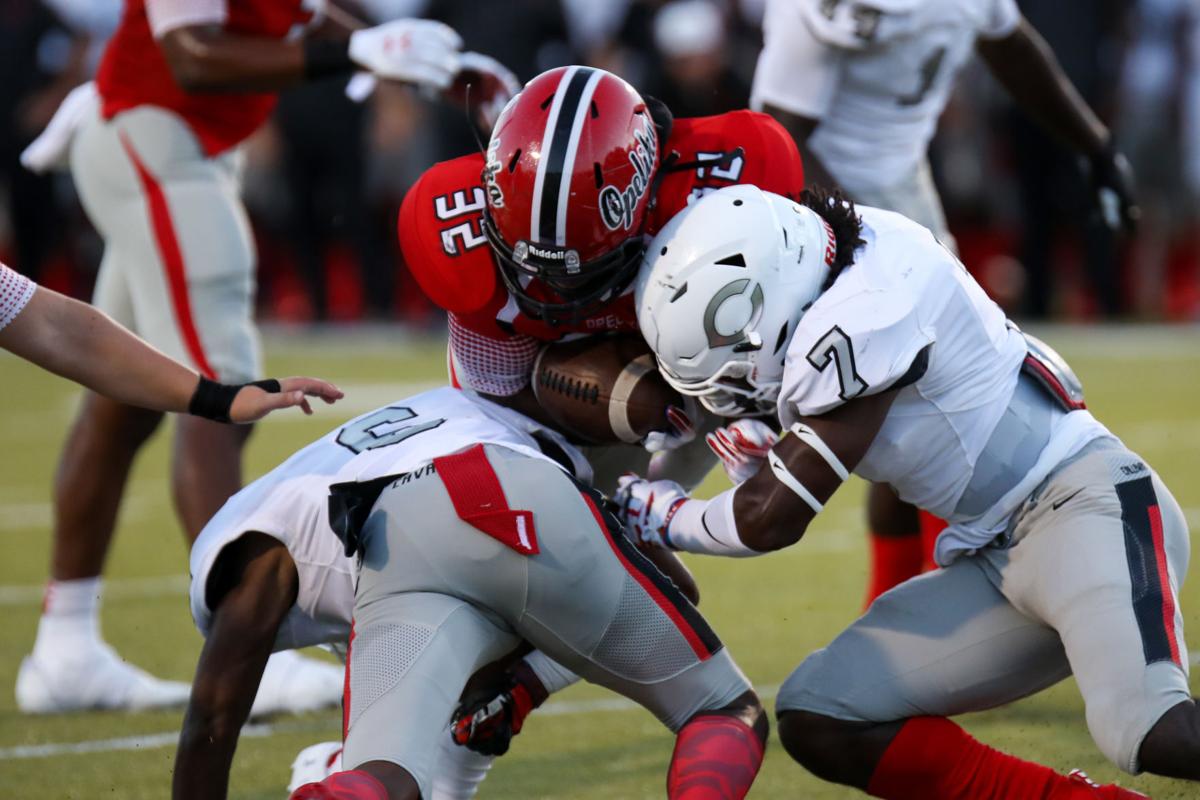 Opelika's Nate Evans (32) runs for a touchdown during the Opelika vs. Callaway (Ga.) at Bulldog Stadium in Opelika on Aug. 22. This year's meeting between the two teams is in serious jeopardy after the GHSA's postponed start of the season. 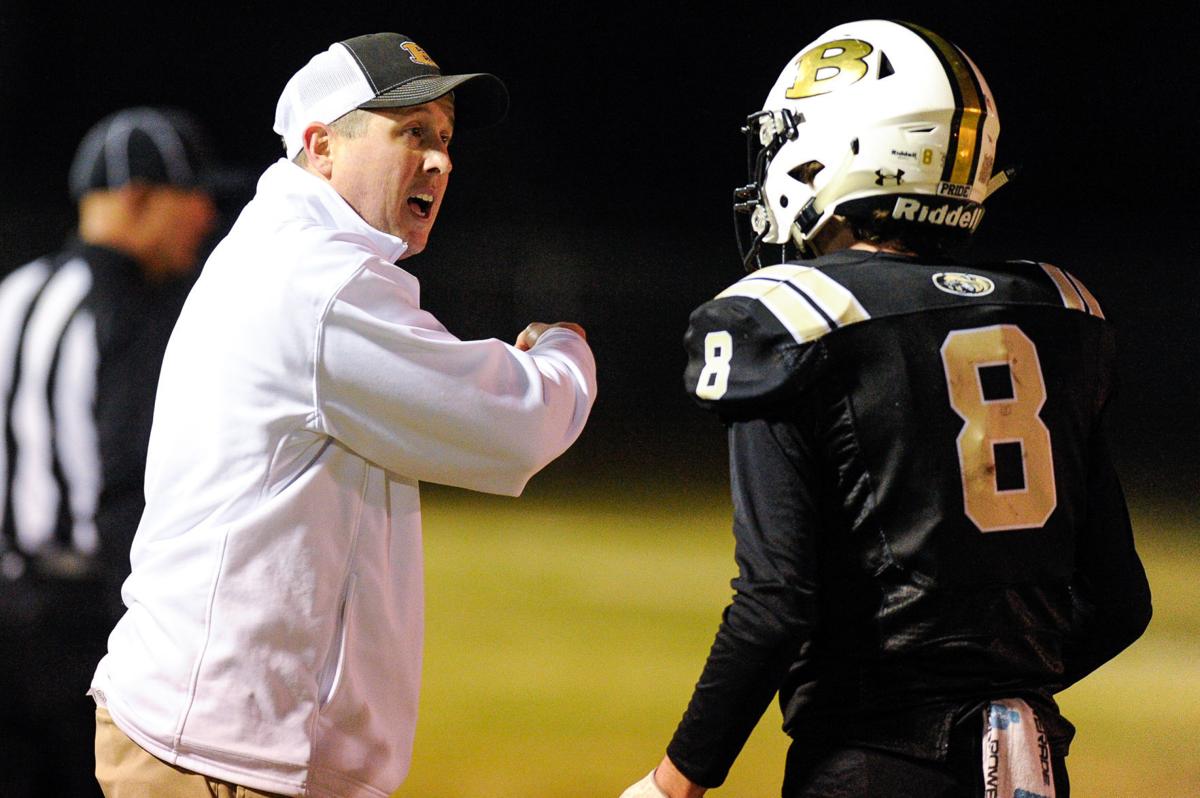 Beulah head coach Matt Johnson has words with receiver Jeremy Conway (8) during a timeout in the first half of the Beulah vs. McKenzie game on Friday, Nov. 1, in Valley.

The Georgia High School Association’s announcement Monday that the start of its high school football season would be moved back two weeks means changes are on the horizon for four local teams.

Opelika, Beulah, Central-Phenix City and Smiths Station’s games against Georgia teams have been affected by the GHSA’s announcement that its 2020 season will begin on Sep. 4 rather than Aug. 21, the originally-scheduled date. Opelika was scheduled to play at Callaway and Central was set to host Peach County on Aug. 21. The next week, Smiths Station planned to host Columbus and Beulah was scheduled to host St. Anne Pacelli.

In addition to the local schools, another premier Alabama program was affected by Monday’s news. Hoover was set to travel to Hoschton, Georgia, on Aug. 22 to take on Lowndes County — now led by former Central coach Jamey DuBose. That game had already been affected by the coronavirus once, as it had been moved from Atlanta’s Mercedes-Benz Stadium to Mill Creek High School.

Given how little flexibility exists between different teams’ schedules, it seems unlikely any of the four games can be rescheduled. None of the area teams involved share a bye week later on in the season with their would-be opponents.

For coaches like Beulah’s Matt Johnson, the GHSA’s announcement is just another instance of having to be able to scramble at a moment’s notice in the unusual lead-up to the season.

“That just happened, and we’re still in contact. We’re trying to figure out some stuff. (Pacelli’s) first game is Labor Day, so that would take them off our schedule right now. I don’t know because I’ll have to see what their schedule is the rest of the year. I don’t know yet,” Johnson said. “The uncertainty is the toughest thing to deal with, but everybody is dealing with it. You don’t use it as an excuse. It’s just part of it right now. The big thing is you just try to keep everybody safe. You want everybody to follow the guidelines and rules, but the uncertainty sure is tough.

“Nothing is set in stone. You’ve got to prepare to play. If we do, great; if not, we’ve just got to move on. I’m hoping we can get things going.”

Smiths Station head coach Mike Glisson had not heard the GHSA’s news Monday afternoon, as his Panthers were going through offseason workouts at the time. Glisson expressed his disappointment in the loss of the home game against Columbus, one which promised to be well-attended given the proximity of the two schools.

Glisson said he’d contact Columbus head coach Phil Marino later Monday then probably field calls over the next few days about a potential new opponent for Week 2. Glisson explained his approach about the schedule changes is no different than when his team faces adversity on a Friday night.

“Like we tell the kids, we’re going to work hard every day. Whatever we have to adjust to, we will,” Glisson said.

Central head coach Patrick Nix’s debut with the team was set to be a good one given the Red Devils were hosting a Peach County team that has consistently been in the hunt for a state championship. While Nix and his staff were beginning to weigh their options for the season opener, he explained they are going to sit tight and wait on the AHSAA to announce its own decision.

Nix’s plans to lead the Red Devils onto the field for the first time may very well have to wait one more week given Monday’s developments. Either way, Nix explained his focus is on making the most of what is in his control and waiting for guidance from the governing body on what to do next.

“Obviously, if our schedule stays like it is, we’re going to play them. I think all of us are just waiting to see what happens. There’s not a whole lot we can do right now until we know what our state does officially with everything before we make any decisions or do anything,” Nix said. “There’s only so much we can do. All we can do is what we do, so we’ll just continue to plan and prepare. For most of our players, it’s the best four hours of their day, so let’s make sure it remains the best four hours of their day every day they come to us.

“Let’s make sure it’s very productive, they’re getting a lot out of it and they’re growing as men. We’ll worry about the rest of it as it comes.”

Opelika's Nate Evans (32) runs for a touchdown during the Opelika vs. Callaway (Ga.) at Bulldog Stadium in Opelika on Aug. 22. This year's meeting between the two teams is in serious jeopardy after the GHSA's postponed start of the season.

Beulah head coach Matt Johnson has words with receiver Jeremy Conway (8) during a timeout in the first half of the Beulah vs. McKenzie game on Friday, Nov. 1, in Valley.