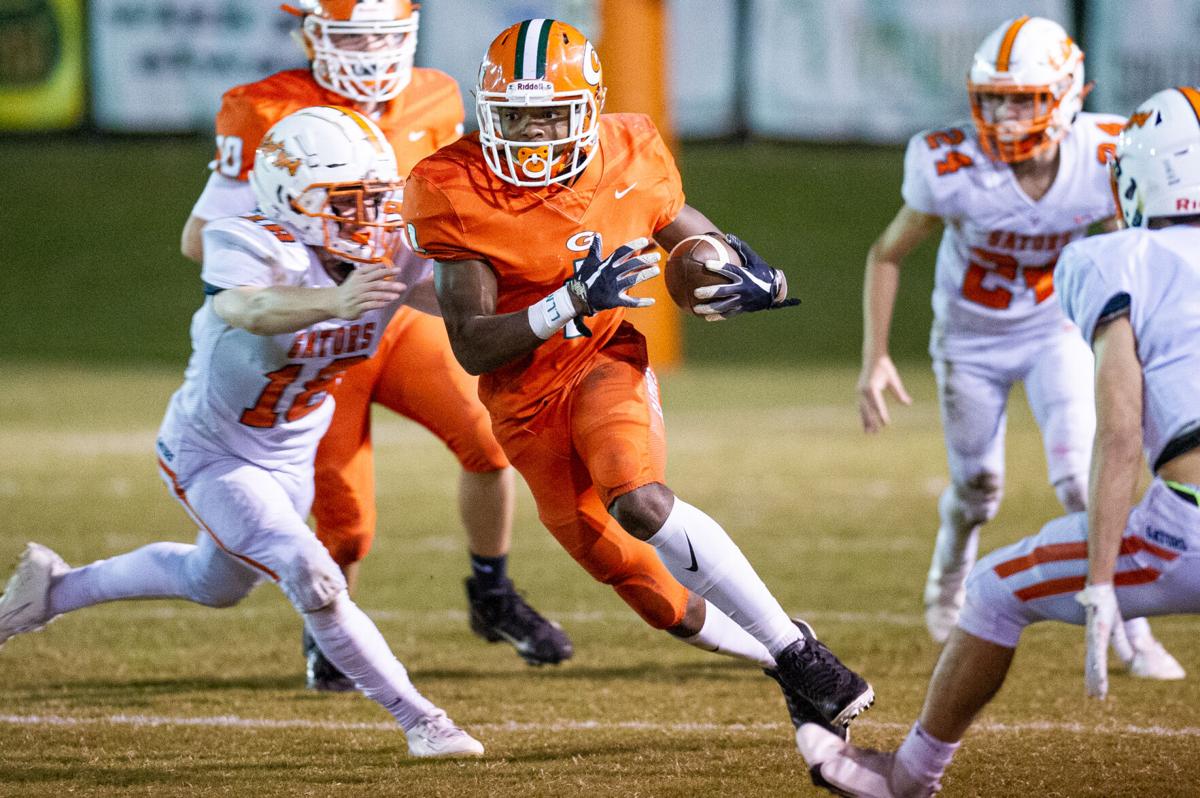 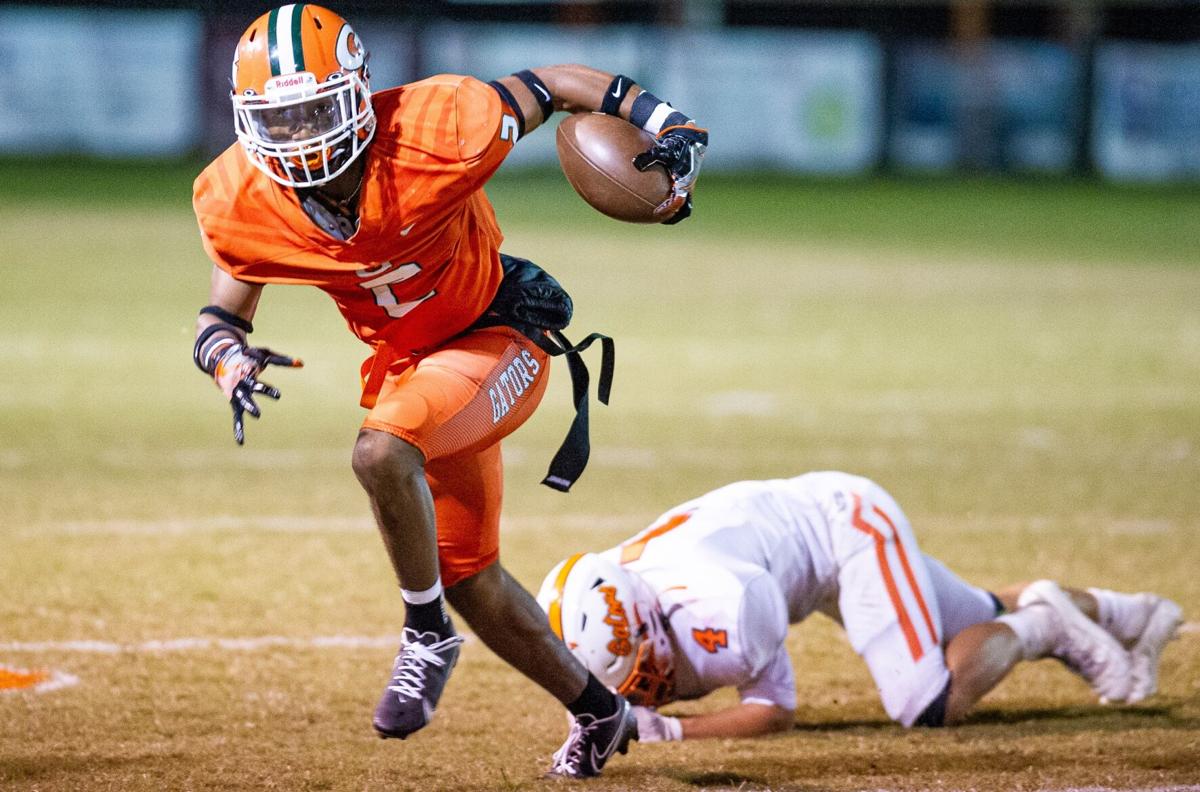 Glenwood's Aaron-Joshua Harris (2) carries for a touchdown against Clarke Prep on Nov. 5 in Phenix City.

This isn’t just for the Glenwood football team.

That’s not how Jason Gibson sees it.

Yes, it’s the Glenwood football team that will win or lose the state championship game today, when No. 1 Glenwood faces No. 7 Pike Liberal Arts at 7 p.m. in Montgomery for the AISA AAA title.

Yes, only the Gators will be out there on the field competing, fighting to cap their perfect season.

But their chase for the championship isn’t just about themselves, Gibson says — and they couldn’t have gotten to this point without countless others.

“I really want it for the school,” said Gibson, Glenwood’s head coach.

Glenwood has powered through the season and is 10-0, now one win away from sealing a magic season in championship gold.

It’s been a special ride all fall — but when asked about the chance to cap it in the most special way, Gibson went back to the summer, and thought about the threat COVID-19 put over the sport, and all the sacrifices that had to be made not just by the players in order to make kickoff happen more safely.

“I thought our administration did an excellent job this year of getting our school in a situation to be able to have school, go to school, follow protocols and do those things, to put us in the position to allow us to still have a football season and be successful,” Gibson said over the phone this week. “I knew we had good players. Back in the summertime when all this was going down, I was so worried — like, ‘Wow, I’ve got a team this good, and we might not even get to play with them.’ And so you’ve got to give the school credit.

Glenwood rematches Pike Liberal Arts after closing the regular season with a 26-7 win over the Patriots back on Oct. 23. Glenwood enters undefeated, having jumped to No. 1 in the AISA in the ASWA rankings after a 4-0 start and holding it ever since.

Led by star running back Kye Robichaux, Glenwood rolled over Clarke Prep 55-20 in the first round of the playoffs on Nov. 5 and then topped Morgan Academy 35-6 in the semifinals last Friday.

Now Glenwood has a chance to complete the first undefeated season ever in school history.

It would mark Glenwood’s fourth state title ever, and first since 1992.

“You know, I haven’t really talked about it much,” Gibson said, offering insight into Gators practice this week. “We really treated it just like another game. It’s just another game that we have to go play and win. We try to maintain and have fun at practice. We don’t want to treat the game that it’s bigger than any of the other games. They’ve done a good job of it.

“It’s been kind of quiet,” he said. “I’m the only one that even brings up the fact that it’s a championship game. The players are just out there working hard and having fun, and, ‘Hey, let’s go play football.’”

Glenwood is now in its fifth season under Gibson, also the head coach of the Columbus Lions professional indoor team. The Gators are back in the state championship game for the second straight year — but this time aiming to win it. Glenwood’s state championships came in 1978, 1991 and 1992.

“It’s a different vibe,” Gibson said. “I think last year we were so bent on getting to that game. We hadn’t gotten to it before. We had lost twice before in the state semifinals. And getting to the game was kind of the goal. Of course we wanted to win it. Everybody wants to win. But: This year’s team’s mentality is a little different. You’ve got some carryover players from that team and now getting to that game is not the biggest thing in world, so much as, ‘You’ve got to get there to win it.’

“I think when you play well and you have the success that we’ve had this year, I think the players feel like they belong there,” Gibson added. “You know, last year we went to the state championship game as a 3-seed. This year we’re going in as a 1-seed so it’s a little bit different mentality.”

Gibson said the Gators players have kept that mentality despite a virus being thrust upon their season in a way none of the players ever deserved. The season couldn’t be the way they once envisioned it being, but they’ve made the most of it.

“They’ve done a great job following the rules — wearing the masks when we’re supposed to wear masks, trying to social distance the best we can, just following the guidelines set forth by the school,” Gibson said. “I thought the kids and the staff has done a really good job maintaining that. And that’s what it was going to take. It was going to take everybody buying in — on the field, off the field.”

The Gators have bought in all season.

Now they’re one game away from the payoff.

Glenwood's Aaron-Joshua Harris (2) carries for a touchdown against Clarke Prep on Nov. 5 in Phenix City.