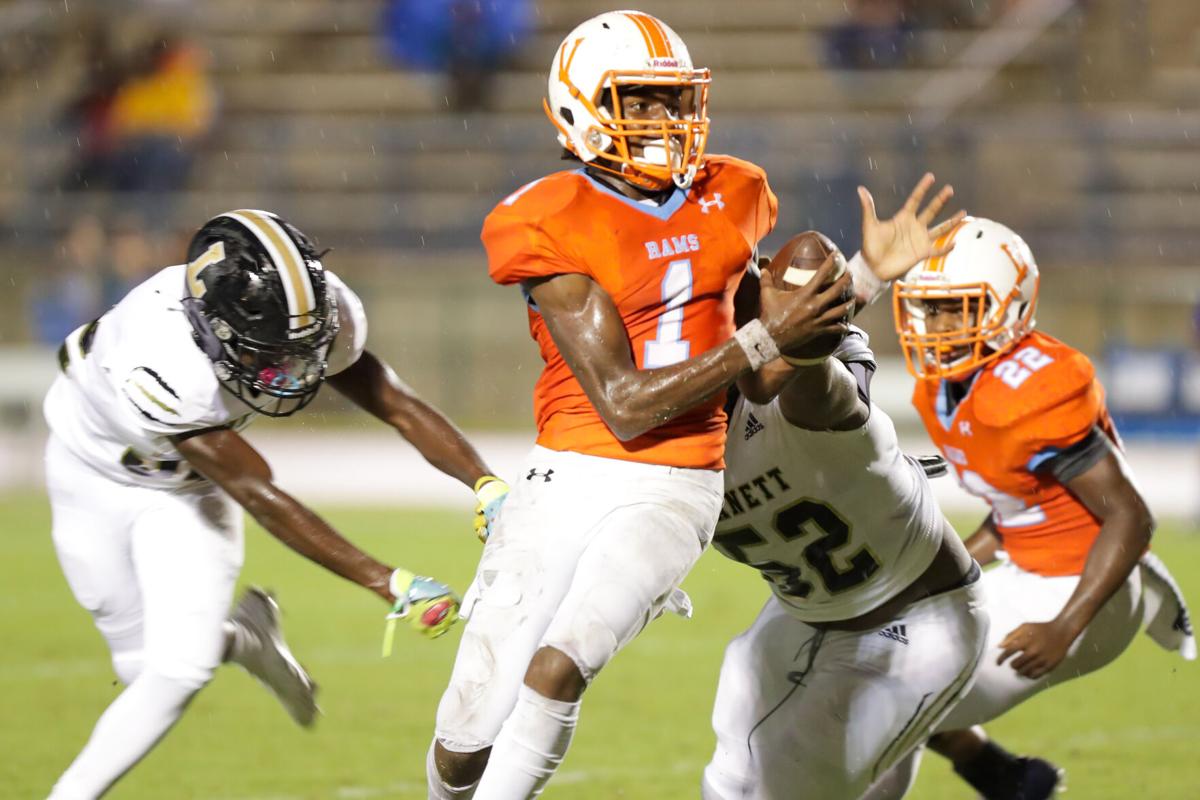 Valley’s Cam Dooley (1) feels the pressure from the Panther defense during the Valley vs. Lanett football game on Aug. 27 in Valley. 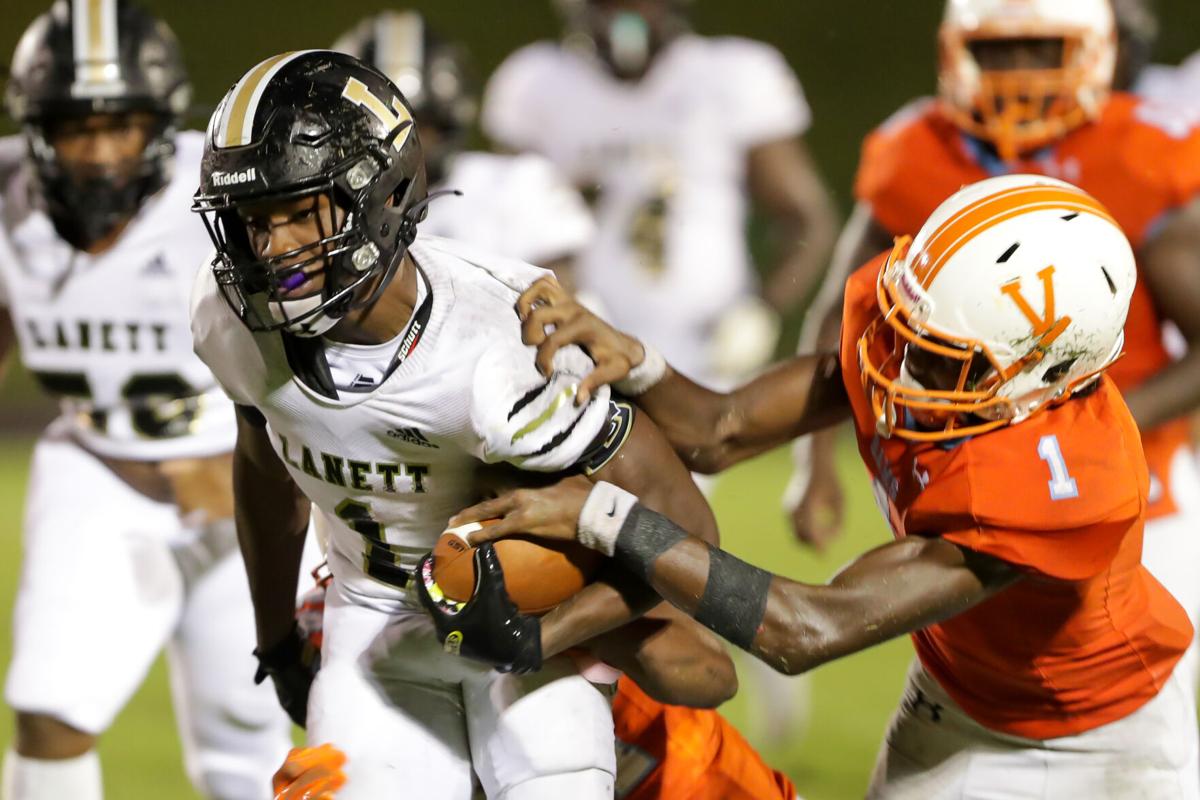 Lanett’s D’quez Madden (1) tries to pull away from Valley’s Cam Dooley (1) during the Lanett vs. Valley football game last Friday in Valley.

Two weeks in a row, Valley needed something big.

Two weeks in a row, Valley turned to Cam Dooley.

“He’s a gamer when those lights come on,” head coach Adam Hunter said. “He turns it on.”

Valley’s new sophomore quarterback has been a key piece for the Rams in their 2-0 start to the season.

Dooley made his first career start two Fridays ago on the road at Beauregard, where his two second-half touchdowns helped Valley win 18-7.

Then last Friday, Dooley and the Rams hosted rival Lanett. Once again, a second-half surge by Dooley was the difference-maker for Valley. His 21-yard game-winning touchdown pass with 6:22 left pushed the Rams to a 14-8 victory.

If you couldn’t tell by the last two weeks of play, the sophomore quarterback is cool under pressure, Hunter said.

From last spring to the start of the summer, Hunter says that the coaches knew that Dooley had the ability to become the starting quarterback. He said that the summer was when Dooley began to separate himself at the position and become the leader in the huddle.

Dooley isn’t just the quarterback, but he also plays on defense for the Rams. The sophomore plays safety, so once the offense comes off the field, Dooley stays on with the defense.

“So, to be able as a sophomore to play defense at safety and then come over to the offense and run the offense, that’s big as young as he is,” Hunter said. “He’s going to make mistakes, but he’s learned from his mistakes going forth and that’s what’s going to be big for him, just learning from those mistakes and correcting them.

“He’s made some big-time throws in some crucial situations in these first two games,” Hunter added. “So, putting him in that position and him thriving in it has been really good for his confidence.”

After the big confidence-boosting win over Lanett, the Rams are hoping to keep riding the two-game win streak that they have.

Hunter knows how big it is to get two wins under your belt before region play begins, but he along with his quarterback understand the task ahead of them with region play starting this week.

Valley will travel to the Cramton Bowl in Montgomery to take on Carver-Montgomery this week in the Region 2-6A opener.

“Hopefully we can go into Montgomery this Friday and compete,” Hunter said. “That’s the main thing we want to do is compete and that’s what we preach to our kids. We’ve got to get better in some phases of the game, that’s for sure. We’ve got to get better up front offensively, but we can take that film and look at it and kind of grow on that and learn from our mistakes and get better. And that’s hopefully what we’ll do this week.”

D'quez Madden led Lanett to the rivalry win, while Auburn High and Reeltown raced away with region wins.

LOACHAPOKA — The top-10 matchup between No. 6 Loachapoka Indians and the No. 4 Maplesville Red Devils would end in lop-sided fashion with the …

Opelika’s defense led the way on a sloppy, soaked night in Montgomery, and the Bulldogs defeated Carver-Montgomery 28-6 on Thursday in Cramton Bowl.

This week's East Alabama Orthopaedics and Sports Medicine Player of the Week is Auburn High's Clyde Pittman, who looks to build off his strong performance against Dothan last week.

AJ Black, Clyde Pittman and Jamaroun Satterwhite are this week's O-A News Player of the Week nominees. Cast your vote

Who is the East Alabama Orthopaedics & Sports Medicine Player of the Week? This week's nominees are from Auburn High, Opelika and Russell County.

Neither rain nor change in venue stopped Lanett running back D’quez Madden on Friday night.

Several local alums rose to the challenge for their college teams Saturday including Lanett's Trikweze Bridges, who delivered a key pass break-up in the Ducks' win over Ohio State.

Valley’s Cam Dooley (1) feels the pressure from the Panther defense during the Valley vs. Lanett football game on Aug. 27 in Valley.

Lanett’s D’quez Madden (1) tries to pull away from Valley’s Cam Dooley (1) during the Lanett vs. Valley football game last Friday in Valley.