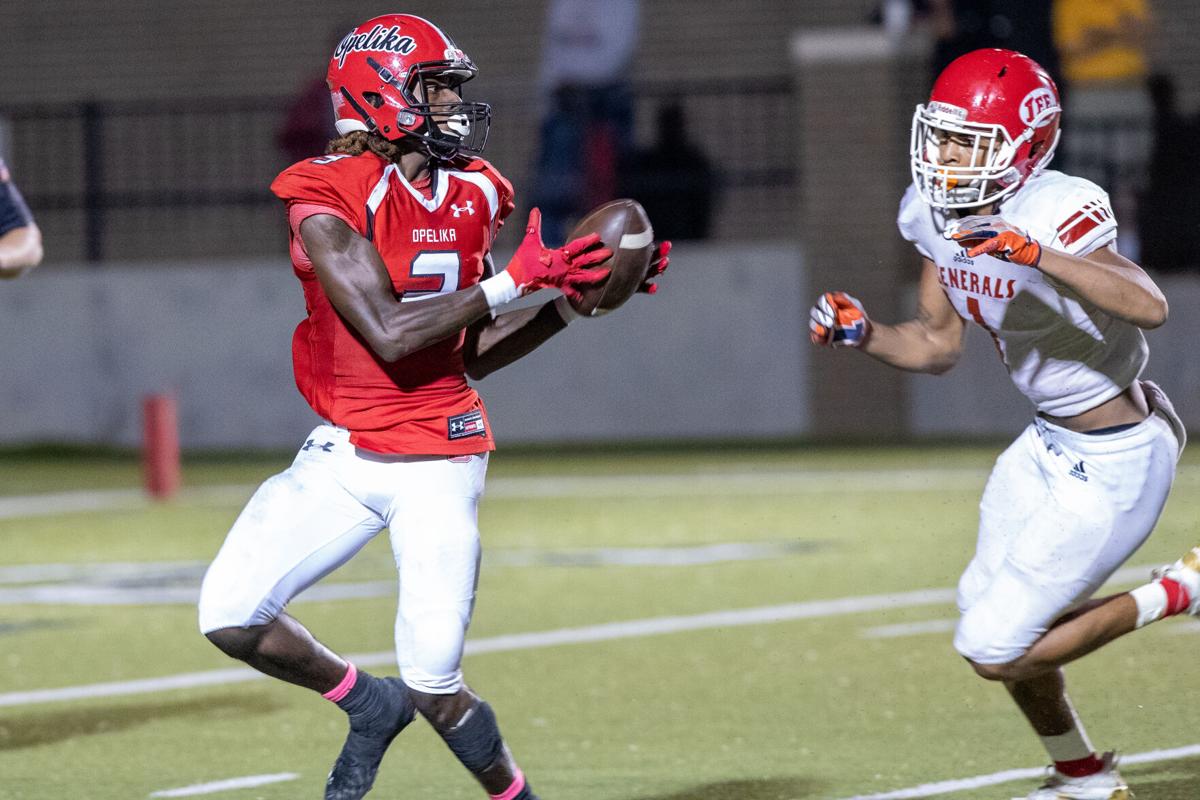 Opelika’s Shawn Jones (3) hauls in a pass and takes it to the 1-yard line setting up the touchdown to force overtime against Lee-Montgomery on Friday in Bulldog Stadium. 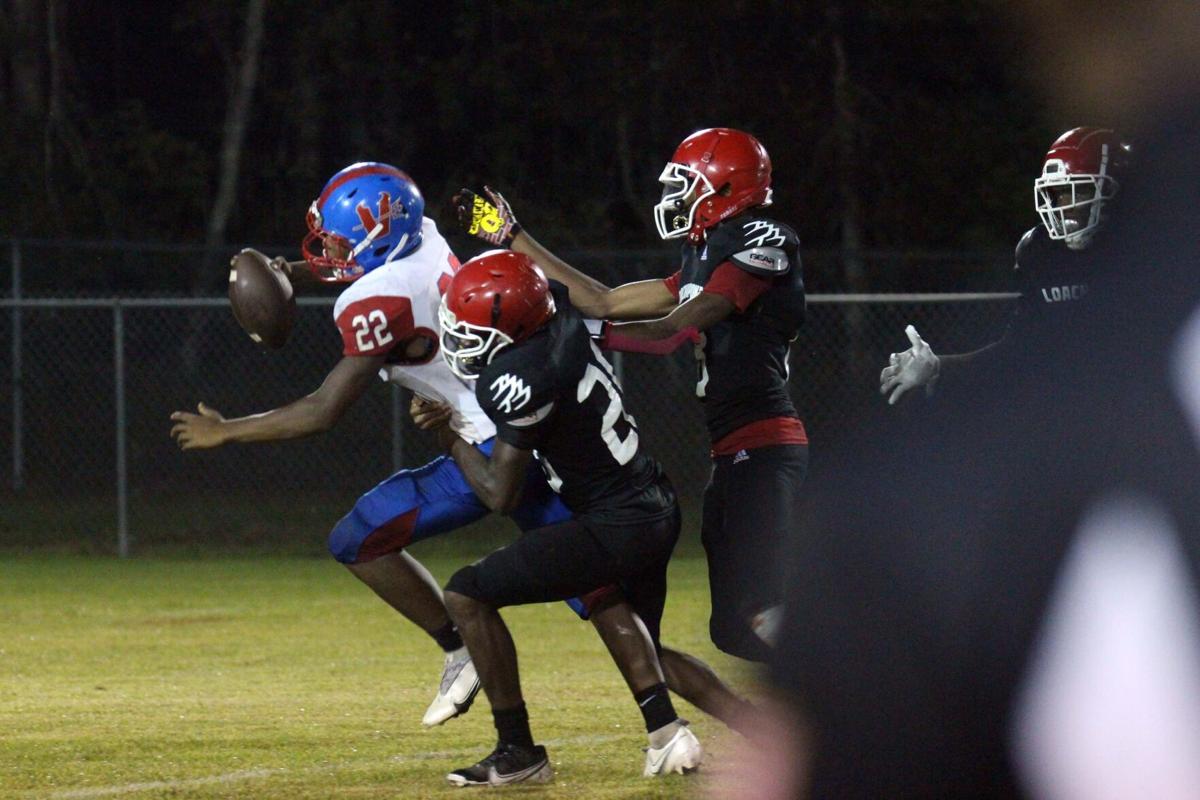 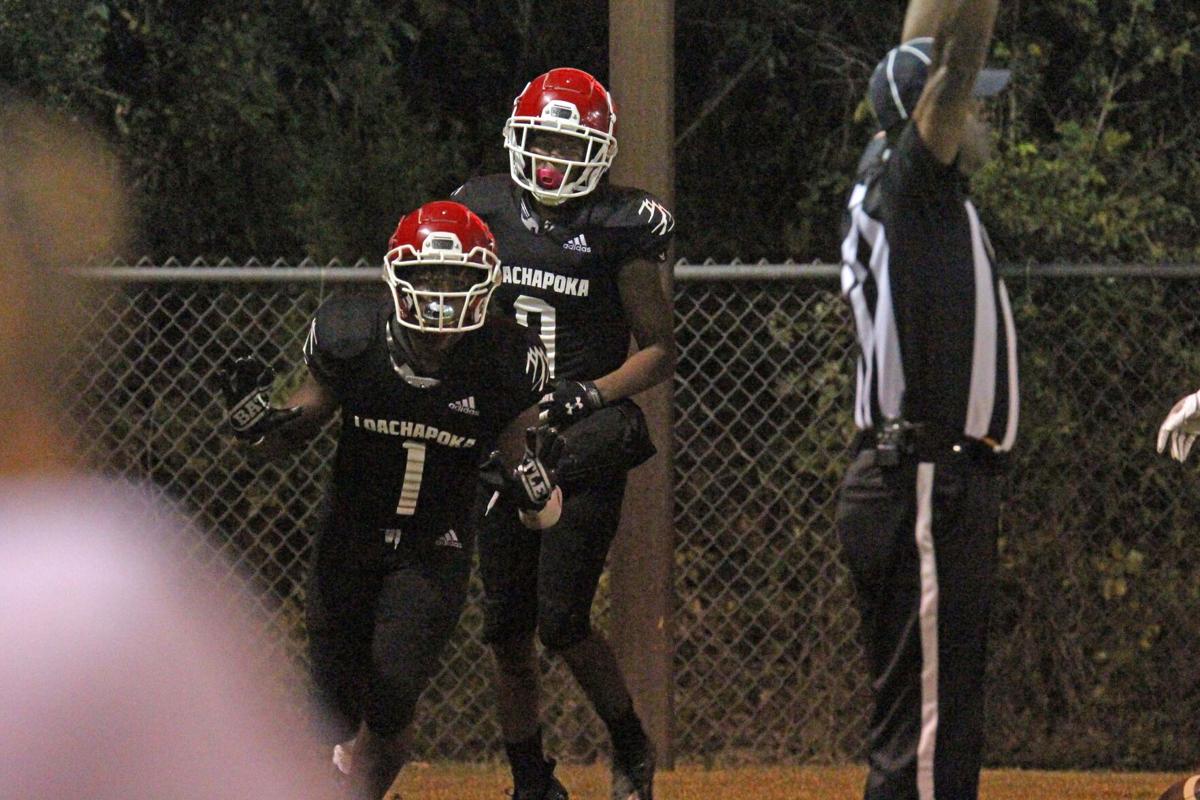 Loachapoka’s Ga’Kuan Palmer (1) celebrates with Jonathan Callaway (9) after Palmer ran back a pick-six against Verbena on Saturday in Loachapoka.

Vote now for the Opelika-Auburn News Player of the Week. Nominees are from Chambers Academy, Central-Phenix City and LaFayette.

Jarrell Stinson batted down the game-deciding pass in overtime, and Opelika defeated Lee-Montgomery 21-20 on Friday night in a thriller in Bulldog Stadium.

After matching Opelika’s touchdown in the second part of the overtime period, Lee-Montgomery was penalized then went for the win with a 2-point conversion attempt from the 17-yard line. The quarterback had a man at the goal line but the Ole Miss commit Stinson broke off his man in the back of the end zone and arrived just as the ball did to break up the pass and seal Opelika’s win.

Opelika survived and moved to 5-0 in Region 2-6A. The Bulldogs are 5-3 on the season overall.

The game went to overtime tied 14-14. Tony Powell hauled in a 4-yard touchdown from Roman Gagliano to start the overtime period. Opelika kicked the extra point to make it 21-14. It was after Lee-Montgomery punched in a 1-yard touchdown that the Generals were charged with a dead-ball foul that backed them up for their conversion attempt.

Gagliano hit Jayvontay Conner for one of Opelika’s regulation touchdowns, while Kaden Cooper punched in the other on the ground.

Central clinched the Region 2-7A championship with the victory.

The Red Devils moved to 8-0 on the season and 5-0 in the league. Central will close out region play next Friday at Dothan.

Second-place Auburn High, off this week, won’t be able to catch the Red Devils in the region standings after Central’s big 21-7 victory over the Tigers on Oct. 1 in Duck Samford Stadium.

Nix fired three of his touchdown passes in the first half, rolling up 234 first-half passing yards as Central built a 28-14 lead by the break.

Central jumped up on Prattville 14-0 early with a Nix touchdown pass to Dylan Gentry then another scoring toss to Jaimel Johnson. After Prattville answered with a score, Johnson ran in his second touchdown of the first half to make it 21-7.

Nix hit Marquez Mobley for a 13-yard touchdown to make it 28-7 by the end of the first quarter, and the Red Devils were on their way to celebrating a region title.

Central stands No. 3 in Class 7A in the latest ASWA rankings.

REELTOWN — Juicy Hughley returned the opening kickoff 91 yards for a touchdown to put Reeltown up just 22 seconds into the game, and the Rebels rolled to a 48-7 win over Beulah on homecoming night.

Hughley scored three touchdowns, all of them in the first half, as Reeltown built a 34-0 lead by the break.

After his opening kickoff return, Hughley scored on runs from six yards out and 36 yards out.

Reeltown moved to 3-4 on the season and 3-2 in Region 4-3A, taking another step toward the playoffs with the region win against Beulah. The Rebels’ only losses in region play have come to Montgomery-Catholic on Sept. 10 and, on Oct. 1, a narrow one-score loss to undefeated No. 3 Trinity 17-14.

Reeltown plays at Dadeville next on Oct. 15.

Loachapoka’s defense pressured Verbena’s quarterback, picked off his pass as the Indians flung him to the grass, then ran back a 22-yard pick six early in the third quarter on the team’s way to a 42-20 win over Verbena on Friday night in Loachapoka.

Loachapoka held a slim 16-14 lead over Verbena at the time coming out of halftime. The defense’s separation score helped lift the Indians to 4-2 on the season and 2-2 in Region 4-1A.

Loachapoka bounced back after a 32-12 loss to state-ranked Notasulga in the rivalry game last Friday.

After the pick-six score, Nick Farrow scored a 1-yard touchdown later in the third to make it 30-14. The Indians were on their way from there.

LaFAYETTE — Chambers Academy scored three touchdowns in a little more than four minutes of game time late in the second quarter, sparking what would be a runaway 49-7 win over Edgewood in AISA Class AA Region 1.

Chambers Academy again avenged a regular-season loss to Edgewood last season. That loss was the Rebels’ only defeat on its way to a state championship in 2020. Chambers Academy also got Edgewood back in the playoffs last year before making it two straight wins on Friday night.

Jeremy "Spud" Conway had four receptions for 110 yards and two touchdowns, and he added a 22-yard rushing score on a sweep to kick off the second-quarter surge. Jordan Benbrook had 13 carries for 104 yards and two touchdowns. John White came down with an interception on defense and ran a touchdown of his own in from 16 yards out on the ensuing drive.

Roman Gagliano, Tyler Ellis and Clyde Pittman are this week's O-A News Player of the Week nominees. Cast your vote

This week's East Alabama Orthopaedics & Sports Medicine Player of the Week nominees are from Opelika, Tallassee and Auburn High.

Auburn High clinched home-field advantage for the first round of the playoffs while Dadeville punched its ticket to the postseason on Friday night.

With the first-ever rivalry game hanging in the balance in overtime, Haley Sanders raced to history.

Auburn High scored touchdowns on all six of its full drives and got two huge early stops to defeat Enterprise by a score of 42-28 on Friday night.

“We don’t get but four years of this and this is my last year, so it just really hit me the last couple of games. You love it and you realize how much you’re going to miss it. Don’t take it for granted.”

Area teams went 12-4 this week, with the only split between Dadeville and Beulah. Check out how the Prep Power Poll looks now with only one week of the regular season to go.

High school football teams across the area are looking to lock up their playoff spots on Friday night.

Watch now: Chambers Academy's Jordan Benbrook looks to 'go out with a bang' in senior year

This week's East Alabama Orthopaedics & Sports Medicine Player of the Week is Chambers Academy's Jordan Benbrook, who ran all over Macon East in a big region win last week.

Pike Liberal Arts clinched the region championship with a 49-13 win over Glenwood on Friday night.

Opelika’s Shawn Jones (3) hauls in a pass and takes it to the 1-yard line setting up the touchdown to force overtime against Lee-Montgomery on Friday in Bulldog Stadium.

Loachapoka’s Ga’Kuan Palmer (1) celebrates with Jonathan Callaway (9) after Palmer ran back a pick-six against Verbena on Saturday in Loachapoka.