Hughley, Rebels run all over rival Dadeville
0 Comments
Share this
{{featured_button_text}}
1 of 8 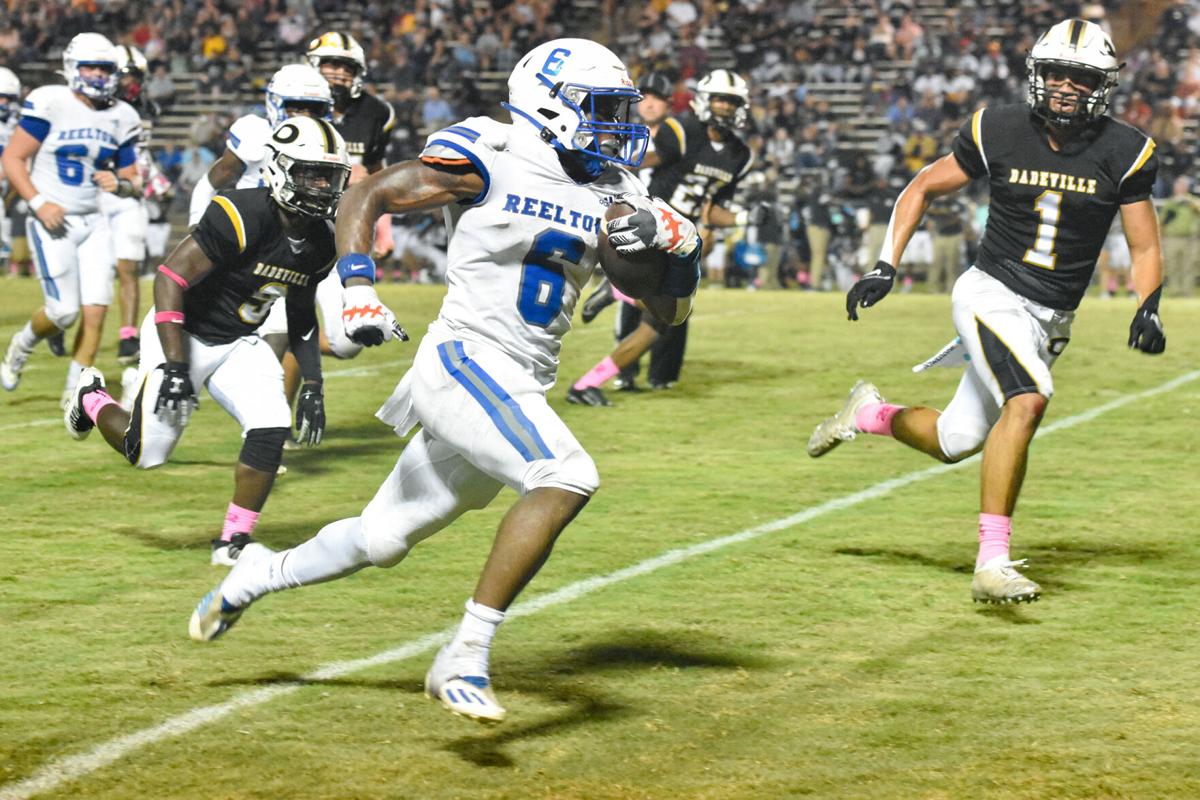 Reeltown’s Juicy Hughley (6) busts out a run against Dadeville on Friday night. 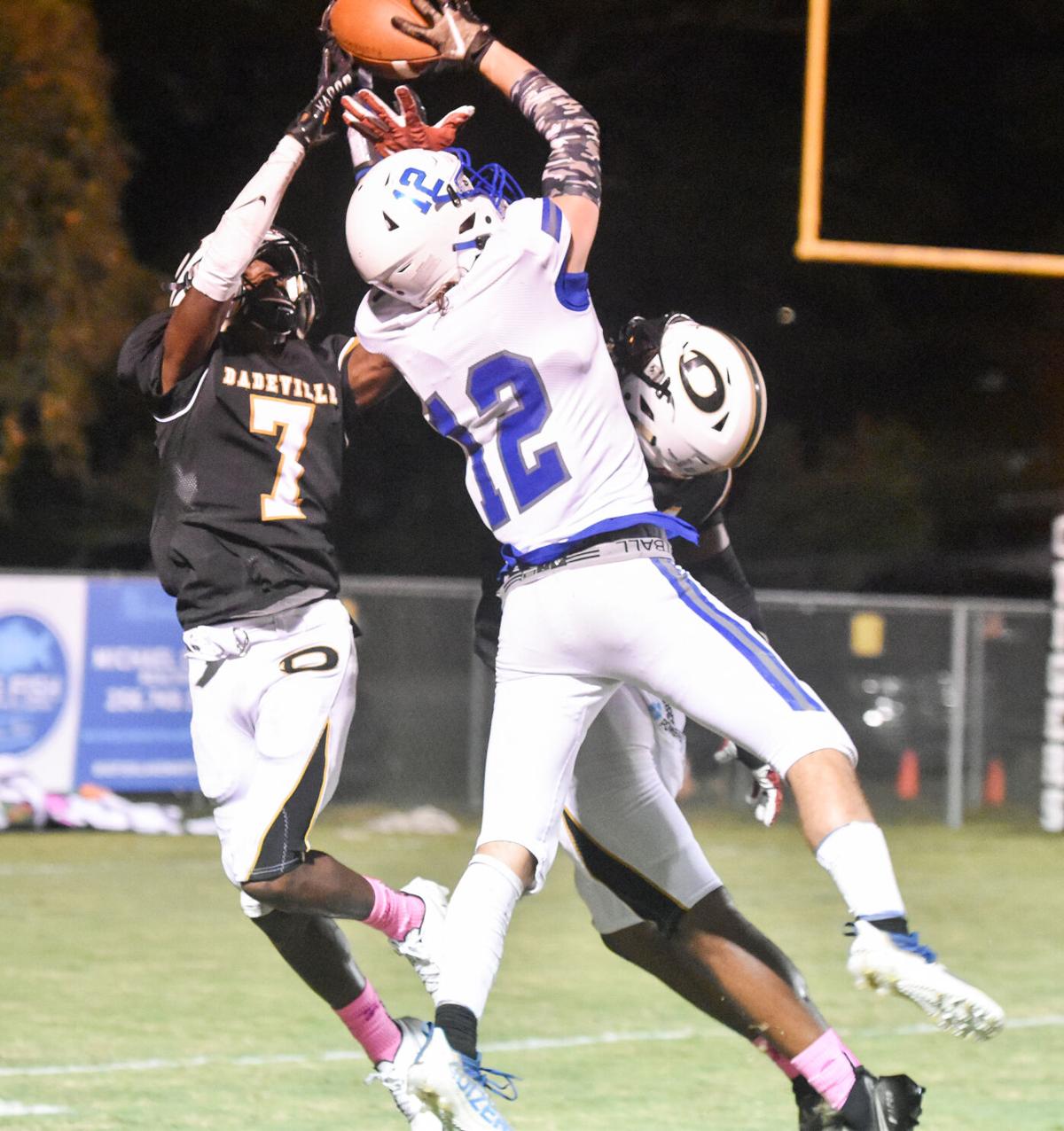 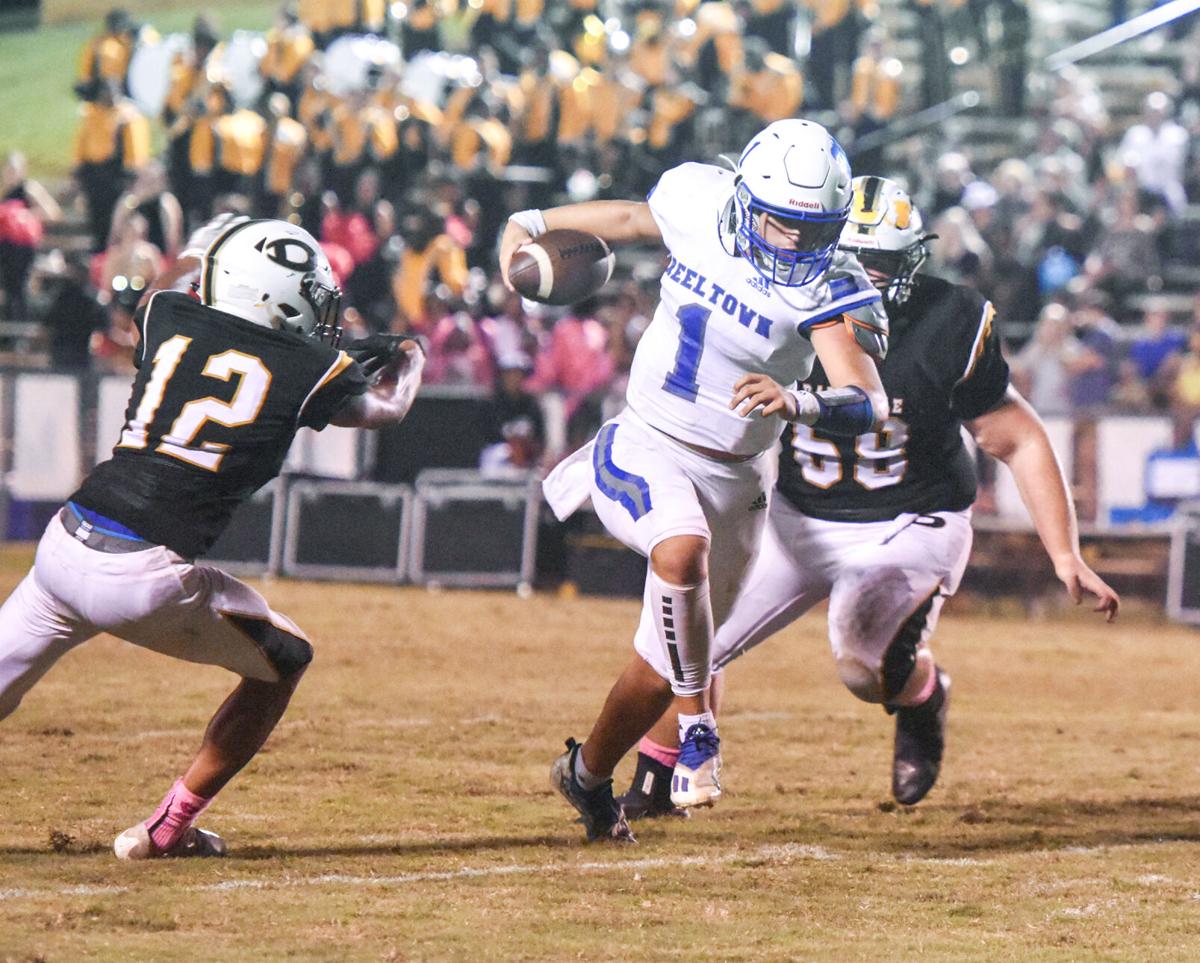 Reeltown's Gabe Bryant (1) slips through a pair of Dadeville defenders on Friday night. 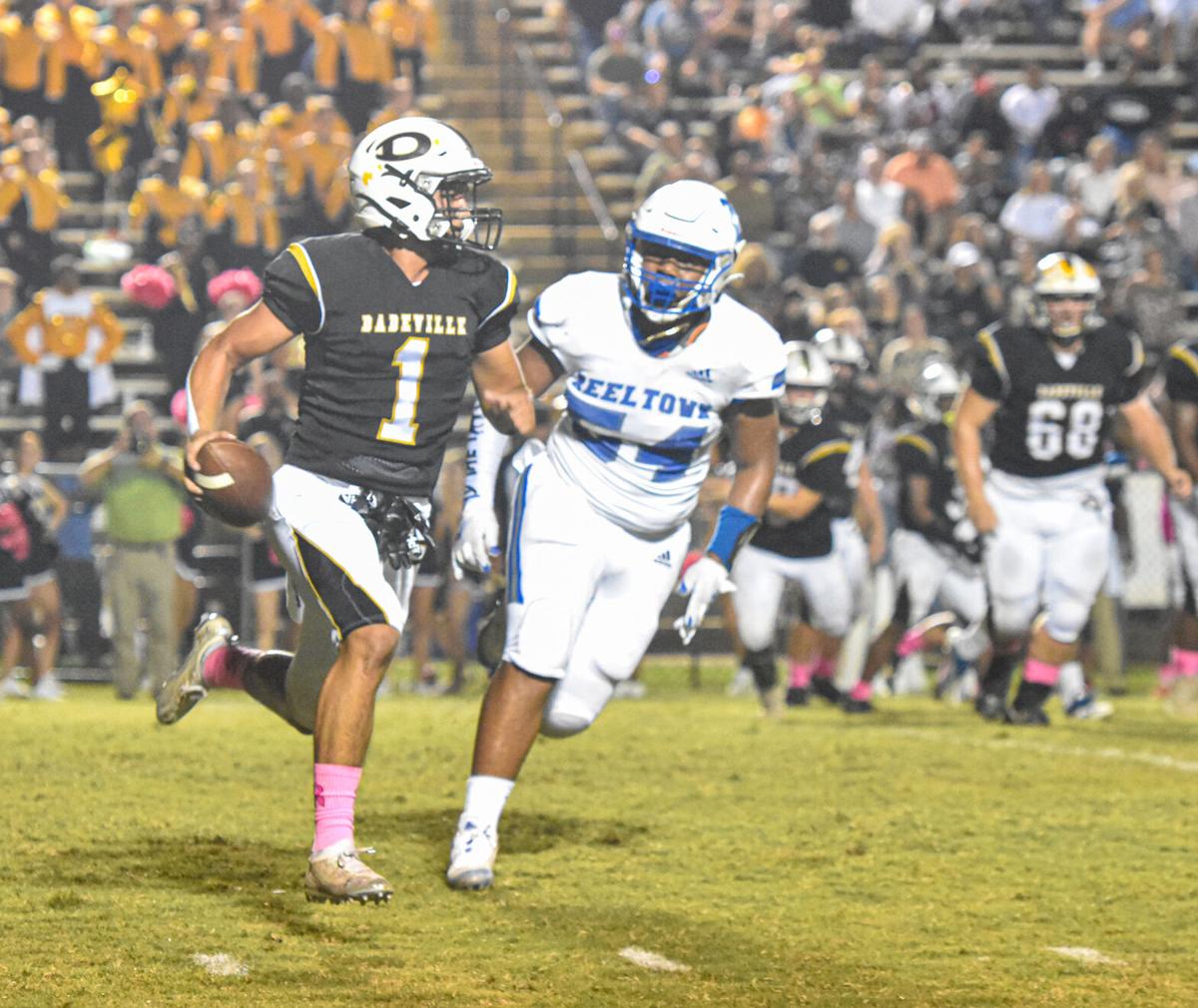 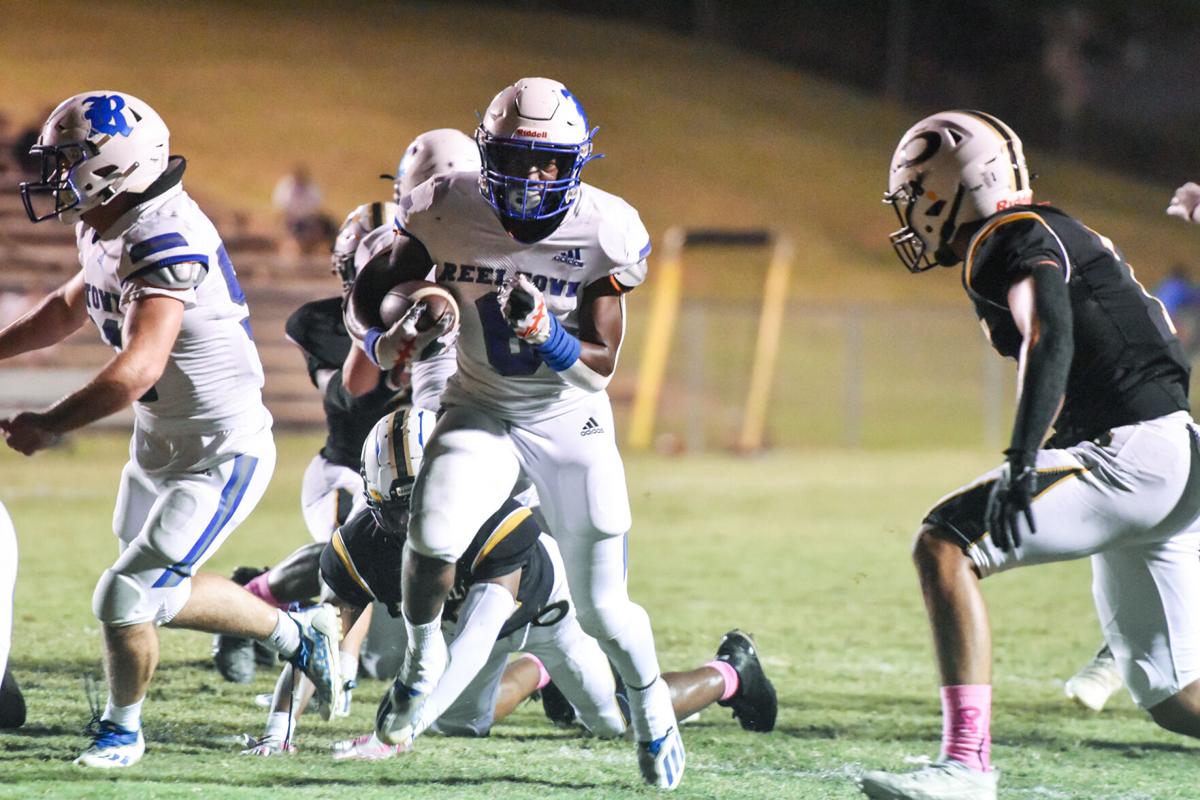 Reeltown's Juicy Hughley has a ton of running room en route to the end zone on Friday night. 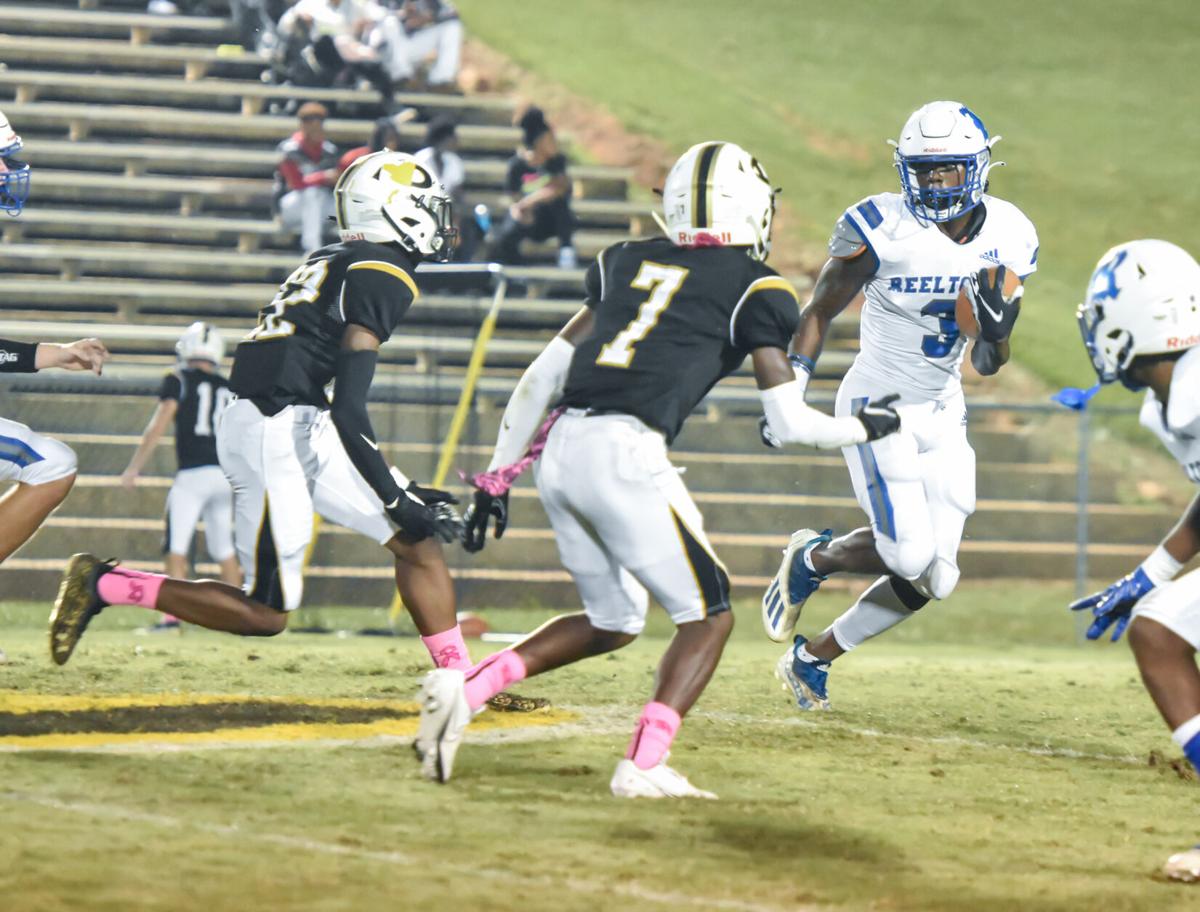 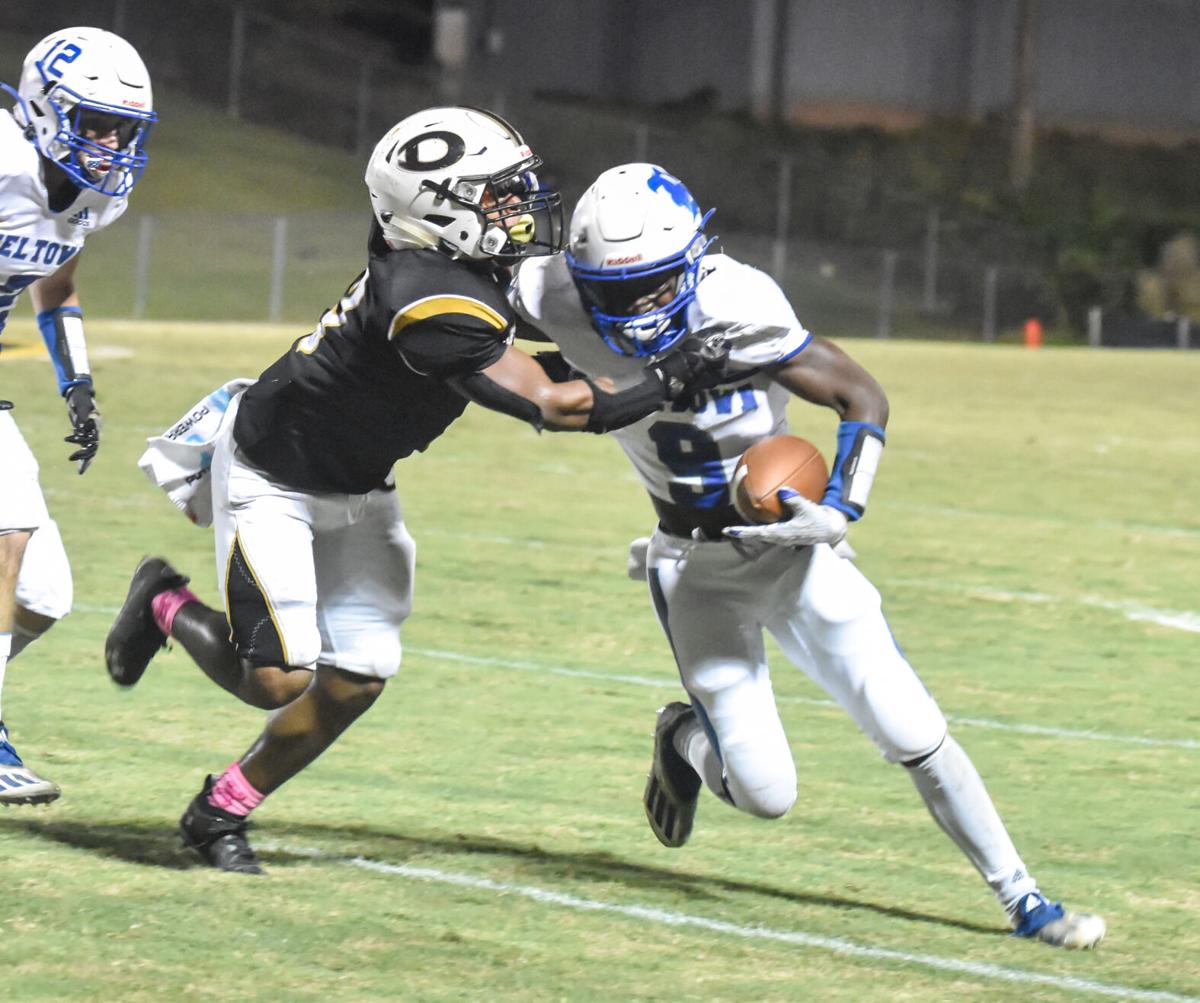 LIZI ARBOGAST For the O-A News

The Reeltown senior running back used a mix of strength, speed and pure physicality to run all over Dadeville in a Class 3A Region 4 game. Hughley finished with a staggering 190 yards of offense — not including his more than 100 yards on special teams — and led the Rebels to a 36-14 victory.

“He’s finally actually healthy now and you can tell,” Reeltown coach Matt Johnson said. “He’s getting some really great reps in practice. He’s a workhorse, and he’s come a long way. We can’t talk about him without mentioning the offensive line because they did a phenomenal job today.”

Early on, the rivalry matchup looked like it was going to be a defensive battle. After trading three-and-outs to start the game, Dadeville made a great defensive stand in the red zone for a turnover on downs. But after the Tigers had another quick punt, it was all Reeltown from then on.

Hughley scored on the Rebels’ next four possessions.

The first was a 14-yard score in which Hughley battled his way in, shaking a Dadeville defender off his back en route to the end zone. He then scored from 6 yards out and called his own name on the two-point conversion to put Reeltown ahead 16-0 early in the second.

Hughley then used a wide-open gap provided by the offensive line to score a 44-yard touchdown and on the very first play of the next drive, his motor is what got him a 77-yard touchdown and the Rebels a 30-0 lead going into halftime.

It wasn’t just Hughley that was impressive though as Reeltown seemed to have a crystal ball every time Dadeville rushing weapons Christian Nelson or Javuntae Holley touched the ball. The Rebels seemed to anticipate their every move.

“Our (offensive and defensive) coordinators put together two great game plans and our kids executed,” Johnson said. “They played fast and downhill. With what they do offensively, from a defensive standpoint, you just gotta be able to withstand it and be physical. They’re delivering a lot offensively, so our kids responded.”

Dadeville wasn’t giving up without a fight, however. Out of the locker room, the Tigers seemed to have a new fire and Phil Dowdell delivered a 80-yard kickoff return to begin the half. But as quickly as the Tigers found life, Reeltown took it away again. Hughley struck for the final time with a kickoff return of his own — this one for 88 yards — for an immediate response.

To add onto its nearly perfect game, the Rebels played excellently on special teams. Dadeville started inside its own 25 five separate times, while Reeltown was busting out 20-plus-yard returns on almost every punt.

“Special teams has absolutely come a long way,” Johnson said. “We had a couple punts (to them) with no return, and our return yardage on special teams has really been key. A couple years ago, we were trying to get people to field punts and now they’re fielding every one of them.”

Dadeville’s only other score was a 2-yard rushing touchdown from Holley midway through the final frame.

Central alum Javion Cohen and his fellow linemen stepped up to the challenge by not allowing a single sack and setting the stage for Alabama to dominate in a 41-24 victory.

Reeltown’s Juicy Hughley (6) busts out a run against Dadeville on Friday night.

Reeltown's Gabe Bryant (1) slips through a pair of Dadeville defenders on Friday night.

Reeltown's Juicy Hughley has a ton of running room en route to the end zone on Friday night.