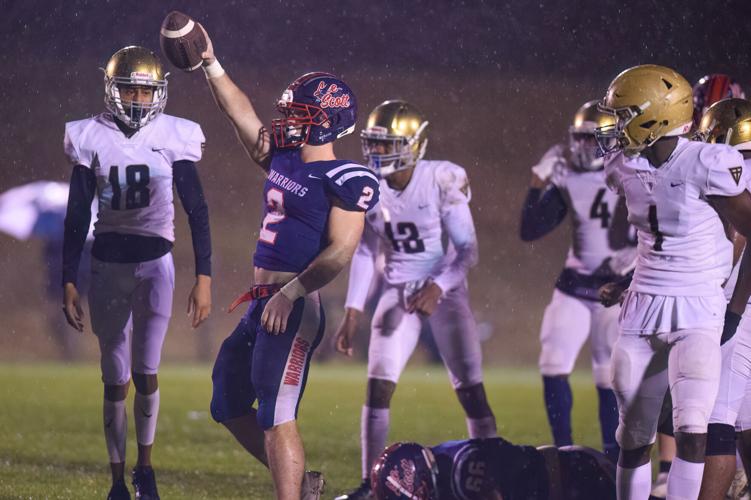 Lee-Scott’s George Meyers (2) signals “first down” after a run against Valiant Cross on Thursday in Auburn. 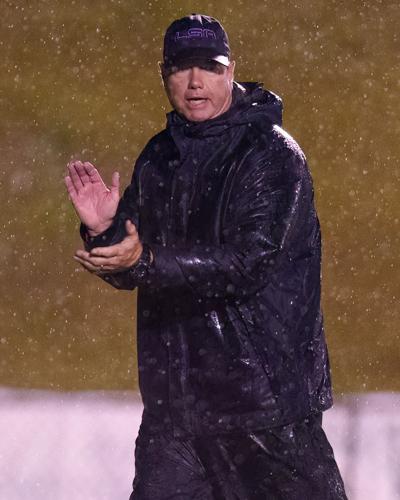 Lee-Scott head coach Buster Daniel directs his team through warm-ups. Lee-Scott vs Valiant Cross on Thursday, Nov. 10 in Auburn, Ala.

CALLIE STANFORD For the O-A News

Judd Scott Field may never be the same after Thursday night, but that’s OK. The Warriors won’t have need of it next week when they’re in Cramton Bowl.

It is destroyed, riddled with holes and tears after practically standing underwater for over two hours of football. Every blade of grass is either trampled or drowning in the rain. It didn’t help to have high school boys sliding over its surface in celebration. A few of their coaches may have been in on the action too.

Football is over on Academy Drive. Football is not over for Lee-Scott Academy.

The Warriors, now 11-0, are advancing to play in a state championship after winning their semifinal in a downpour — a slog of a game played practically in a mud pit with rain coming down hard and blowing sideways as a tropical depression rises north out of the Gulf.

The home Warriors were able to overcome the elements, though, shutting out visiting Valiant Cross 41-0 to play one more.

Lee-Scott will play in the state title game in Montgomery on Nov. 17 against the winner of Friday’s game between Glenwood and Clarke Prep.

“This is huge for our guys, our program and our school. I can’t tell you how proud of our guys I am,” said Lee-Scott head coach Buster Daniel of the win. “I love all these guys. I don’t mind coming to work, getting with these guys because they work their tails off and do everything we ask them to do. I love this team.”

With the win, Lee-Scott has an opportunity to fight for its first 12-win season since 1994, which ended in a 10-7 win over Morgan Academy in the state championship game. That same scenario may happen again next week.

In a downpour like the one on Thursday night, the primary goal must always be to hold onto the football. Lee-Scott made that a priority, attempting just four passes throughout the game and scoring each touchdown on the ground.

After the game, players waited in line, shook their opponents’ hands but then cut loose once they reached the opposite sideline. On a jog heading back towards the home bleachers, Lee-Scott players slid on their stomachs into the puddles sitting off the crown of the field. Covered in mud, they then heard words of praise and affection from the coaching staff who were similarly covered in mud after making that same slide.

That coaching staff was key in the win, making halftime adjustments that allowed Lee-Scott to take advantage of players that were being productive and use them to neutralize what had been a physical Valiant Cross defense.

That halftime adjustment was to rework the run game, leaning primarily on senior George Meyers. His night ended with 100 yards on 21 carries with three touchdowns, with the team logging 255 yards of total offense.

Meyers led the way on the ground. The next closest contributor was Andrew Hahn with just six carries for 72 yards and a touchdown. Jake White had five carries for just 14 yards. The visitors were quick to get a read on when White was set to get the ball, with three of his carries logging zero or negative yardage.

Lee-Scott was largely neutralized until the end of the second quarter, opening the game with an onside kick that allowed them to score a touchdown but that quick productivity was short lived. The next five drives stalled, ending via either fumble, two missed field goals, a punt and a failed fourth-down attempt.

Meyers woke his team up before halftime with a 20-yard touchdown run that highlighted the fact that he was physical enough to plow through the defense. That drive put Lee-Scott up by 14 points heading into the locker room, a comfortable cushion but not a margin the team was satisfied with.

The only other Warriors to score were Tyler Kennedy with a three-yard run to open up the scoring after halftime, when Lee-Scott received the ball for the opening drive. The night’s final score was via freshman quarterback Haiden Harper on a 10-yard run with four minutes remaining in the game.

Meyers’ success was aided by the fact that the Lee-Scott defense was also able to capitalize on the wet conditions. With a slippery ball and bad footing in addition to their usual aggression, the home Warriors were able to shut down Valiant Cross’s offense by holding 19 of its 41 plays to zero or negative yardage.

“It was awesome to get to carry the ball and just get the offense moving a little bit in the terrible conditions. It was a lot of fun,” Meyers said of his contributions. “I just thought we played a good game overall. We were able to grit it out and and came out with a win.”

The entire defense was able to contribute and in the 41 plays they faced, the difference of the game was made. Senior linebacker Dalan Bush got in on eight tackles, with defensive end Alex Cash grabbing seven of his own.

“Our whole defense had a massive game. They just shut them down totally. We struggled a little bit on offense early. Our defense kept us in the game and kept getting us the ball back,” Daniel said. “We finally figured out a way to block those guys up front and get the job done. Really had a great night. (Valiant Cross) had one big run on them and that was missed tackle.”

Bush’s highlight was a punishing hit on Valiant Cross’s third play of the game, a blow so hard the receiver fumbled a ball he had already received and tucked away.

That fumble was not an outlier. Throughout the game, the teams combined for six fumbles but the difference was that Lee-Scott was not losing its in a way that gave the other Warriors any points. Bush also snagged the game’s lone interception, but the ensuing drive didn’t finish in the end zone.

Senior quarterback Ryan Dearing and sophomore quarterback Pelzer Reaves took a dive together in the mud, off to themselves on one end of the field. The two are often together on the sideline but took a moment to celebrate by themselves after the game.

Dearing has worked his way back in the postseason after missing a majority of the regular season with a foot injury, with Reaves shouldering the workload along the way. His elder often serves the role of coach for him as well, but the duo can now trade drives and work together to run the offense as fluidly as possible.

The two quarterbacks combined for three passes, a useless effort in the rain that the coaching staff quickly abandoned. Reaves threw two in the first half, Dearing one in the second.

Reaves was able to go on an uncharacteristic long run in the third quarter, a broken play that sent him dashing to the short side of the field. His handoff to George Meyers was no good and Meyers could tell immediately, turning his shoulder to function as a lead blocker while Reaves tucked the ball and carried for a 12-yard gain.

“It took some offensive schemes. At halftime, we drew up some good stuff to figure out our blocks and just finding the plays that worked against this defense,” Meyers said. “They had a good inside linebacker…Once we figured out to get it away from him, we were able to take it where we needed to go.”

That randomness was the way the entire game went, with typical contributors like Andrew Hahn and Jake White neutralized because their shiftiness was not the same in the sloppy footing.

Next up, the Warriors await the result of rival Glenwood’s semifinal against Morgan Academy to see who will advance to the Cramton Bowl finale. In the meantime, the players will prepare and savor those childhood dreams realized.

“It’s been a dream of mine since I’ve been a kid to win a state championship, especially since it’s my senior year. It’s just been amazing for me and seeing the guys have that helped us get here, it’s been incredible,” Bush said. “I couldn’t ask for anything more.”

Thompson's eighth-grader at quarterback won game MVP and finished 12-of-14 passing with 207 yards and five touchdowns in the state title game against Auburn High.

The Auburn High boys basketball team traveled to Georgia and came back with a win Friday night, besting Hardaway in Columbus, Ga., 70-62.

Auburn High made it to the biggest stage but couldn’t overcome a dynasty and a Thompson team on its way to a fourth consecutive state title.

Playing for it all: Auburn High takes on powerhouse Thompson in Class 7A title game

For the first time since the championship games were moved to college campuses, Auburn High School is competing for a state title in its own backyard.

The city’s school system plans to let students out at noon on Wednesday so that they can attend the games.

Auburn High is advancing to the big one — in the big stadium.

Tom Brady reveals the reason he hates the 49ers

The potentially legendary outcomes of the World Cup

The potentially legendary outcomes of the World Cup

The craziness of the 1930 World Cup

The craziness of the 1930 World Cup

Lee-Scott’s George Meyers (2) signals “first down” after a run against Valiant Cross on Thursday in Auburn.

Lee-Scott head coach Buster Daniel directs his team through warm-ups. Lee-Scott vs Valiant Cross on Thursday, Nov. 10 in Auburn, Ala.