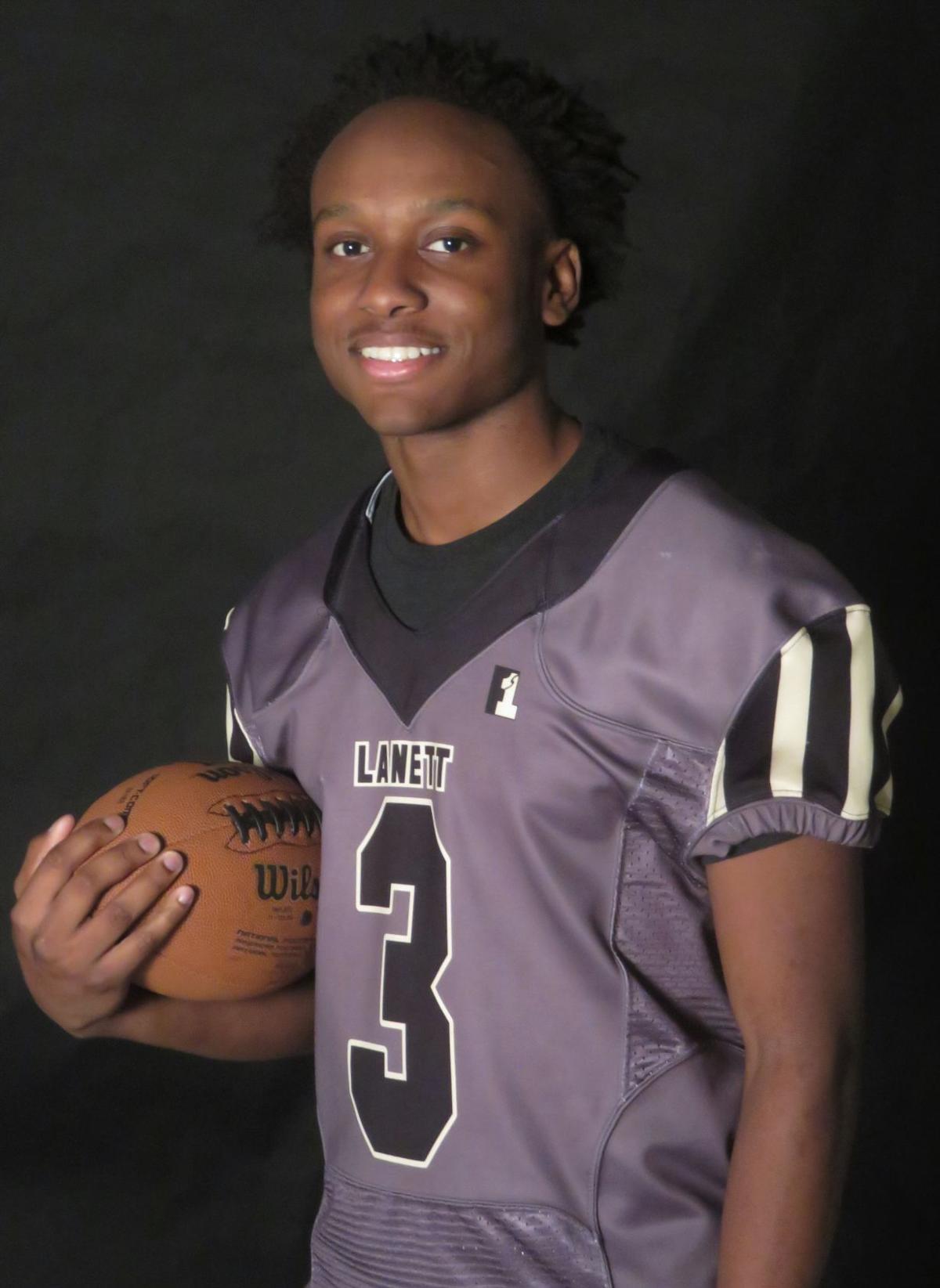 Jaquarius "Quae" Houston, who was part of four state championship teams in football and basketball at Lanett, passed away on Saturday at 18 years old. 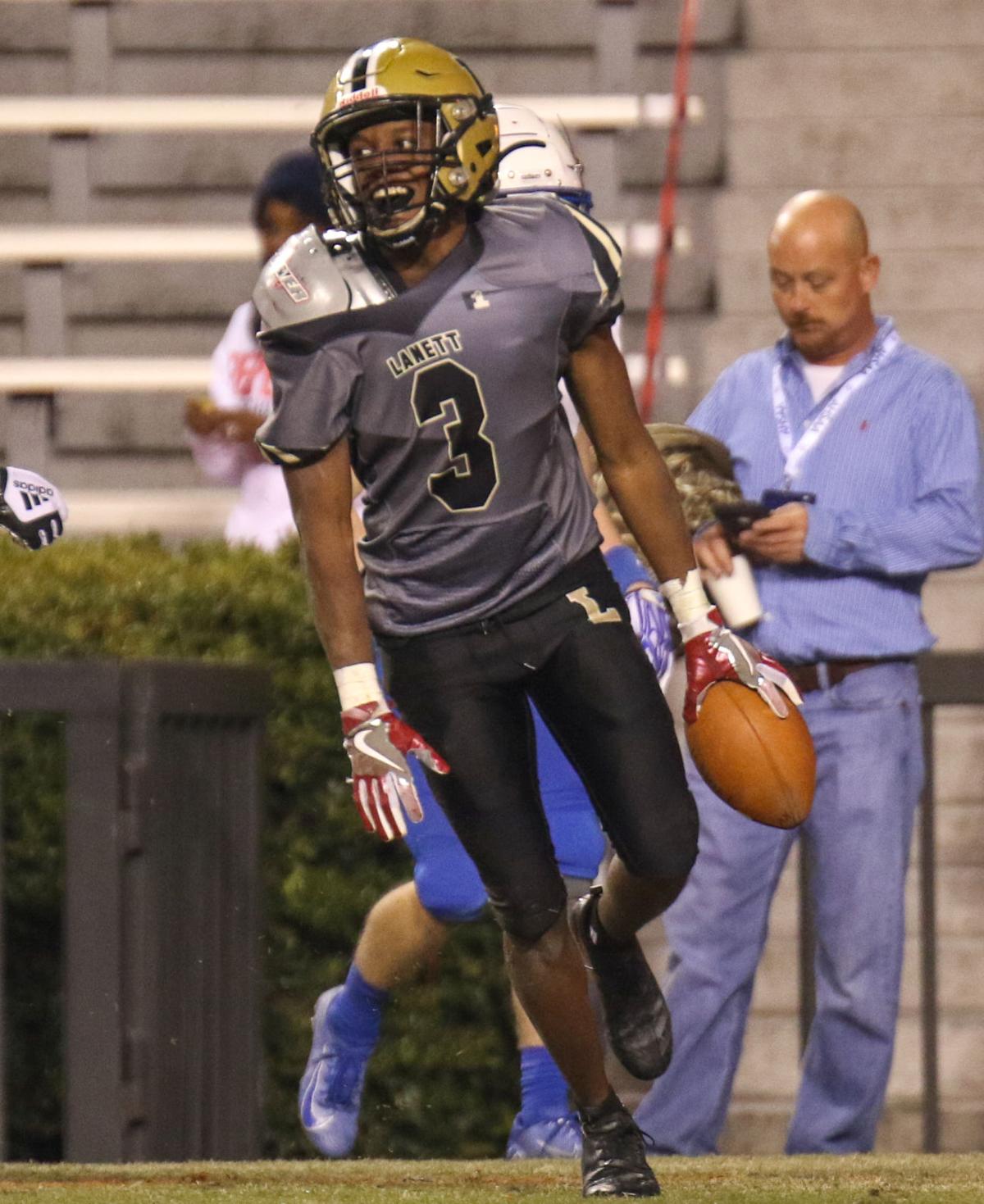 Lanett football and basketball player Jaquarius “Quae” Houston put his driven-yet-jovial personality on display every time he stepped onto a playing surface.

Whether it was on the football field or inside Lanett’s gymnasium, Houston had a habit of saying the right thing at the right time or making the play the Panthers needed someone to make. His want to win was infectious, and he never hesitated to pass along a word of wisdom to a teammate to get them over the hump or to finish another grueling practice.

Houston meant so much to so many at Lanett as well as the surrounding cities and towns. That’s why those who knew him best are reeling now that he’s gone.

Houston died on Saturday at 18 years old, just months after graduating from Lanett and just before joining his new football family at Faulkner University in Montgomery. His sudden death sent a shockwave through Lanett, leaving the people who befriended him and loved him with the hard task of continuing without him.

“He was a delight to coach. I say that because Quae was one of those people who never grumbled. It didn’t matter how hard you worked him, he just did what he had to do. He never complained,” former Lanett basketball coach Richard Carter said. “He was a champion in every respect. He had a champion’s attitude. He had a champion’s work ethic. He was a champion in the classroom as well as on the basketball court. I think he understood some things beyond his years.

“I wish that all the guys I’ve ever coached would have been like him. I wish that because he was special, and that’s why God called him home — because he’s special.”

Carter recalled needing another guard when Houston was a freshman during the 2016-2017 season, and after the veteran coach called the ninth-grader up to the varsity squad the young man was dissatisfied. Houston wanted more playing time — he was a reserve among Lanett’s older and more experienced players — and he asked Carter to send him back down to the Panthers’ B-team to get the reps he wanted.

Carter remembered reassuring Houston he was on the varsity to stay. And just like that, Houston dropped any issue with his situation and went to work.

The challenge of playing for the varsity squad was a daunting one, but Houston never wavered. He became a consistent contributor over the next four years, and the Panthers won state titles on the hardwood in 2017 and 2018 and also played for another title in Houston’s senior season.

For Carter, what set Houston apart from so many of the young men he coached in his half-a-century on the sidelines was the fact he knew where all five players on the floor needed to be at any given moment.

“He was all business all the time. One of the things I always strived to do when I was coach is to develop coaches on the floor. That’s what Quae was — he was a coach on the floor,” Carter said. “When that ballgame was going on, he knew where to put people, and he knew how to encourage people. He wasn’t the kind of guy that would beat up on folks and tell them they weren’t doing nothing; he was an encourager.”

Seidrion Langston got to know Houston during Houston’s first year on varsity while Langston was an eighth grader who had just moved to Lanett. Langston said Houston put his coach mentality on display soon after they first met, as Houston showed Langston the ropes and how to run the system the Panthers had implemented on the basketball court.

Langston developed a fast friendship with Houston, which was enhanced by their play on the Panthers’ football team. Langston lined up at outside linebacker for Lanett with Houston set at one of the cornerback positions, meaning the two were close in proximity snap after snap, game after game.

“Shoot, he made practice fun for real. There’s a lot of things a lot of people don’t want to do when they’re tired and all of that, and he’d be the only one out there turned up, for real. He’d be like, ‘Y’all, come on. Let’s do it. Let’s get it,’” Langston said. “He was a leader inside and outside of football. He made games fun. We’d talk trash a lot — especially to the other team.

“We were on the same side most of the game. Me, him and Kristian (Story), we’d get in the other team’s head. He made everything better.”

Houston proved just as tremendous an athlete in football as he was in basketball. He was a part of two state championship teams in football as well, and in his last game he caught a 30-yard touchdown pass from Story that sealed the Panthers’ championship game victory last December.

Houston’s relationship with Story and his family was an incredibly close one. Story’s parents, Lanett football coach Clifford Story and Krisse Story, became Houston’s godparents, and Houston and the Storys’ three sons were nothing short of inseparable.

Houston’s sudden passing has undoubtedly left a tremendous hole in the Storys’ lives.

“That boy was really my twin. I’ve been smiling and laughing at old videos and pictures all day. It’s been hard to even cry today because I know you wouldn’t even want that. I’m thankful that I had the opportunity to know you and get to see you grow over the years,” Tre Story, Clifford and Krisse’s oldest son, wrote on Facebook. “You, Ken Ken (Kristian), and Pop (youngest brother Caden) have really given me some proud big brother moments. I’ll cherish every memory. I love you with my whole heart, kid. Believe me. Me and the fam (are going to) keep lifting you up, and everything we do is for you here on out.”

Houston was always someone those around him gravitated toward. Earnest Webb, Houston’s position coach in football, explained that Houston was like a son to him, adding he was a model person in the classroom and out in the world just as he was when he had a uniform on.

Last weekend was a blur for Webb, Langston and the other football team members who spent Saturday and Sunday trying to cope after hearing the news. As hard as that period was, it wasn’t any easier Monday, when football practice rolled around.

Langston said he and several teammates met at a church near his house in Lanett before practice as is their custom then headed to campus, at which point everyone broke down. The moment was one that was undoubtedly hard for anyone to bear — an entire team of teenagers mourning one of their own — but the coaches did what they could to help them through such unimaginable pain.

“You saw everybody walking (into the locker room) with their heads down. Coach Story, he came in and was like, ‘Y’all, we can’t do this. We’ve got to go hard for Quae. If Quae was here, he’d tell us, y’all, don’t cry. I’m good,’” Langston said. “Coach Webb told me something I’ll always remember. He said, ‘Where Quae is now is a way better place than being on earth. He ain’t got to suffer no more or go through nothing. He’s good now because he’s with the Lord.’”

Those who cared about Houston have spent the last few days re-watching videos, reading old texts and laughing at photos featuring their friend. For Langston, he’s leaned heavily on his last interaction with Houston, one that seems too good to be real now that he’s gone.

Last Friday, Langston was in the barber shop and said he remembers thinking about how he hadn’t seen his friend all week. Once he walked out the door, he heard a car horn and turned to see a car’s window roll down.

Langston climbed inside and talked to Houston about a number of things. Houston told Langston he wanted him to lead the receivers this fall now that Houston had graduated, and he assured Langston that the rising senior was going to make it to his favorite school, the University of Kentucky.

Before Langston got out of the car, he said Houston told him he loved him and to be safe. Those words were the last ones Langston ever heard his friend say.

“It just felt a little different that last time (I saw him), like I had a feeling. I didn’t have a feeling something would happen, but it just felt kind of different,” Langston said. “That moment is kind of special to me because I got to tell him I love him one last time.”

In the aftermath of Houston’s death, his friends and teammates have leaned on each other and flocked to the side of Houston’s mother, Naya Story. Lanett has always contained a sense of brotherhood among its student-athletes — most of them are actually related in some form or fashion — but the grieving that has gone on in the last week has demonstrated that it doesn’t take one ounce of shared blood to be family.

Houston will be laid to rest during a graveside service today at 11 a.m. CT at Essie J. Handy Memorial Cemetery in LaFayette.

Why are the Cowboys favored to win the divison?

AJ Black, Clyde Pittman and Jamaroun Satterwhite are this week's O-A News Player of the Week nominees. Cast your vote

Who is the East Alabama Orthopaedics & Sports Medicine Player of the Week? This week's nominees are from Auburn High, Opelika and Russell County.

The Opelika Bulldogs’ strategy against Eufaula on Friday night was simple enough: The Tigers couldn’t score if they couldn’t hold onto the ball.

With region play in full swing, several area teams took advantage in their pursuit of some much-needed victories this week.

Several local alums rose to the challenge for their college teams Saturday including Lanett's Trikweze Bridges, who delivered a key pass break-up in the Ducks' win over Ohio State.

LaFayette was dominated by the opposing offense and its own mistakes in a huge loss 50-25 under B.B. Comer.

Rarely does a team see an 86-point swing against a singular opponent in just a one-year timespan, but that’s exactly what Dadeville accomplish…

Jaquarius "Quae" Houston, who was part of four state championship teams in football and basketball at Lanett, passed away on Saturday at 18 years old. 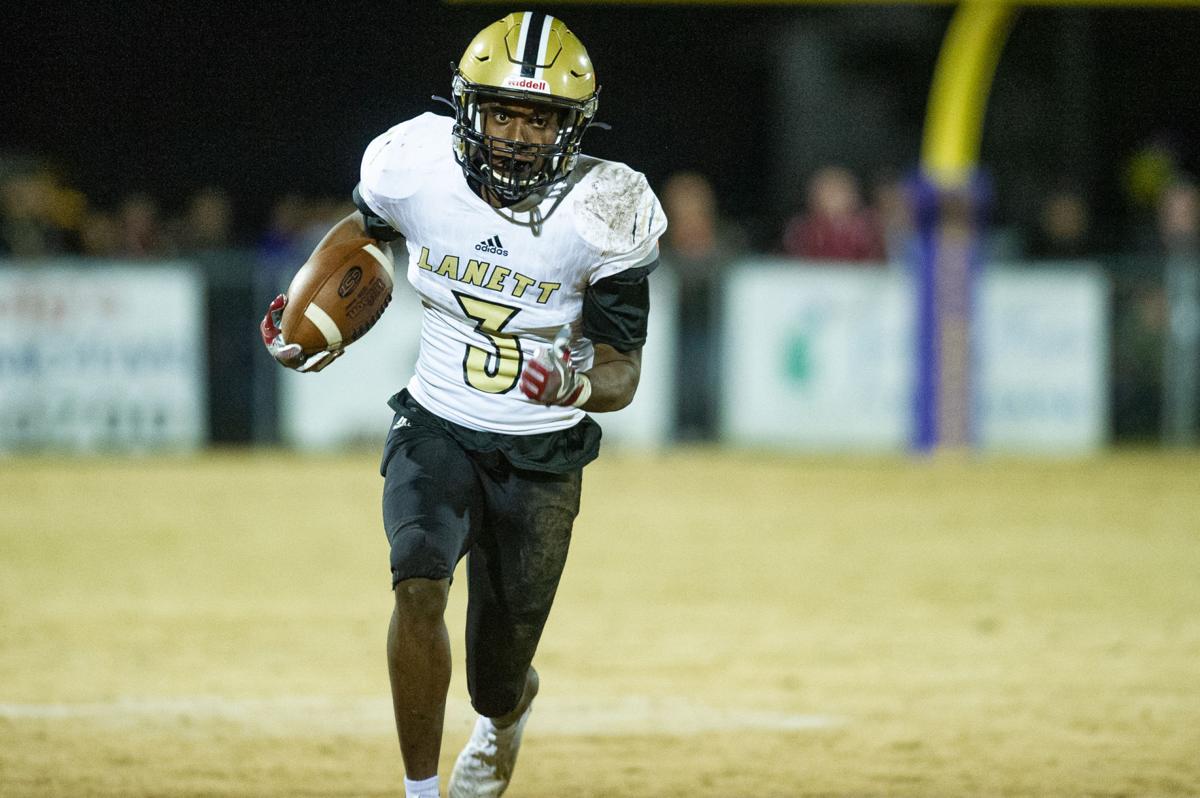 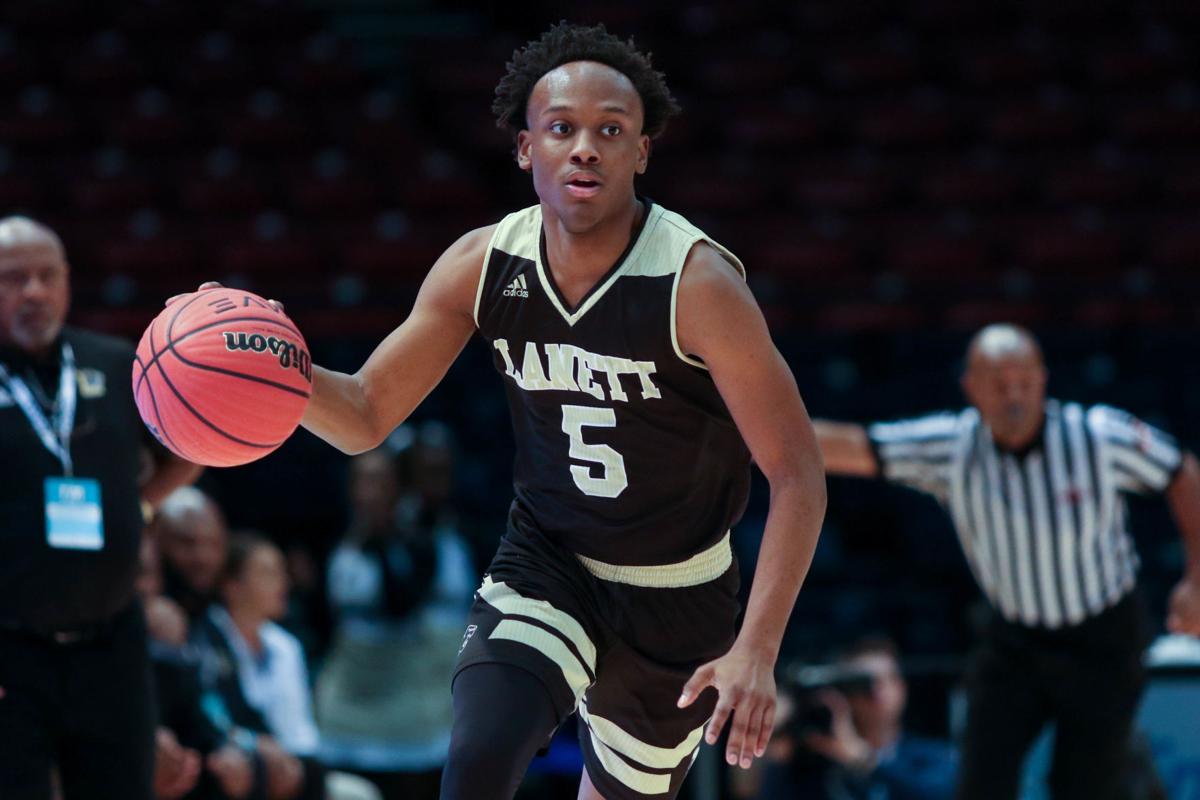 Lanett's Jaquarius Houston (5) dribbles the ball up the court during Lanett's state semifinal game Feb. 24 against Jacksonville Christian at Legacy Arena in Birmingham. 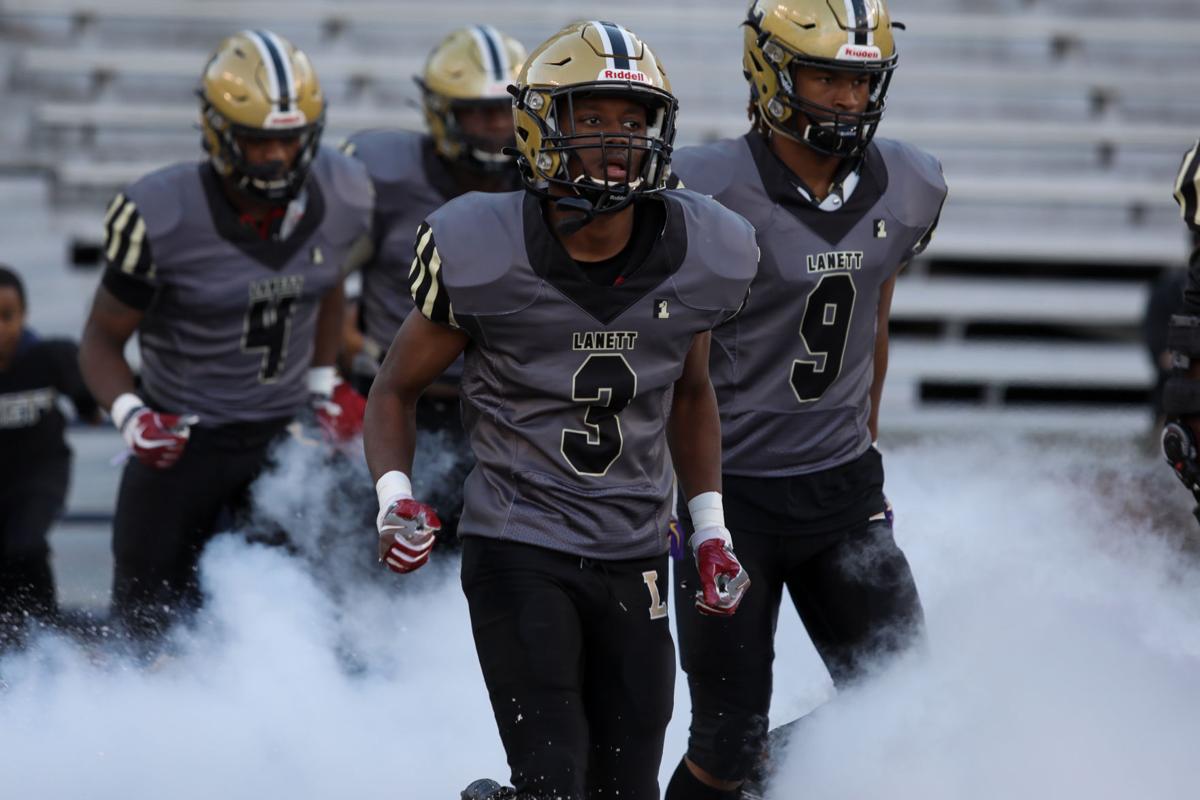 Jaquarius Houston (3) takes the field prior to the Lanett vs. Mars Hill Bible AHSAA Class 1A state championship game at Jordan-Hare Stadium on Dec. 5, 2019.