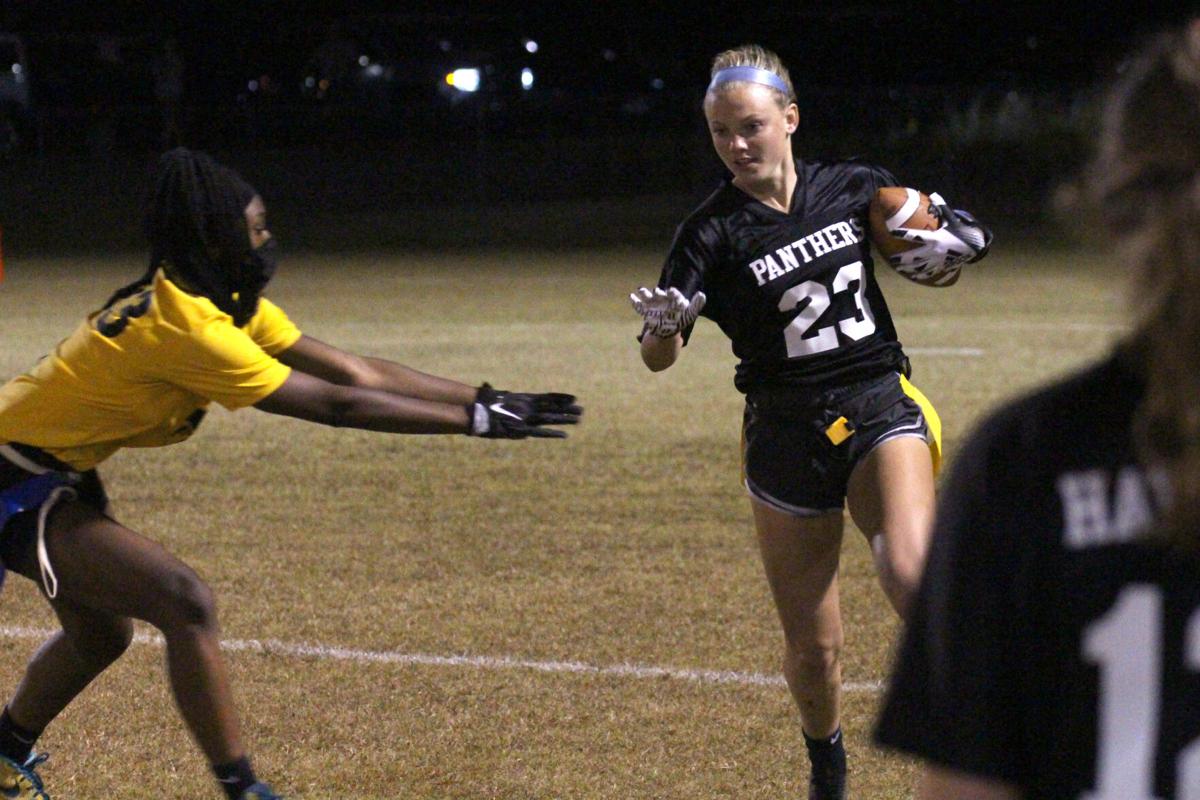 Smiths Station’s Jenna Bruce runs with the ball against Wenonah in the quarterfinals of the AHSAA girls flag football playoffs on Nov. 8 in Smiths Station. 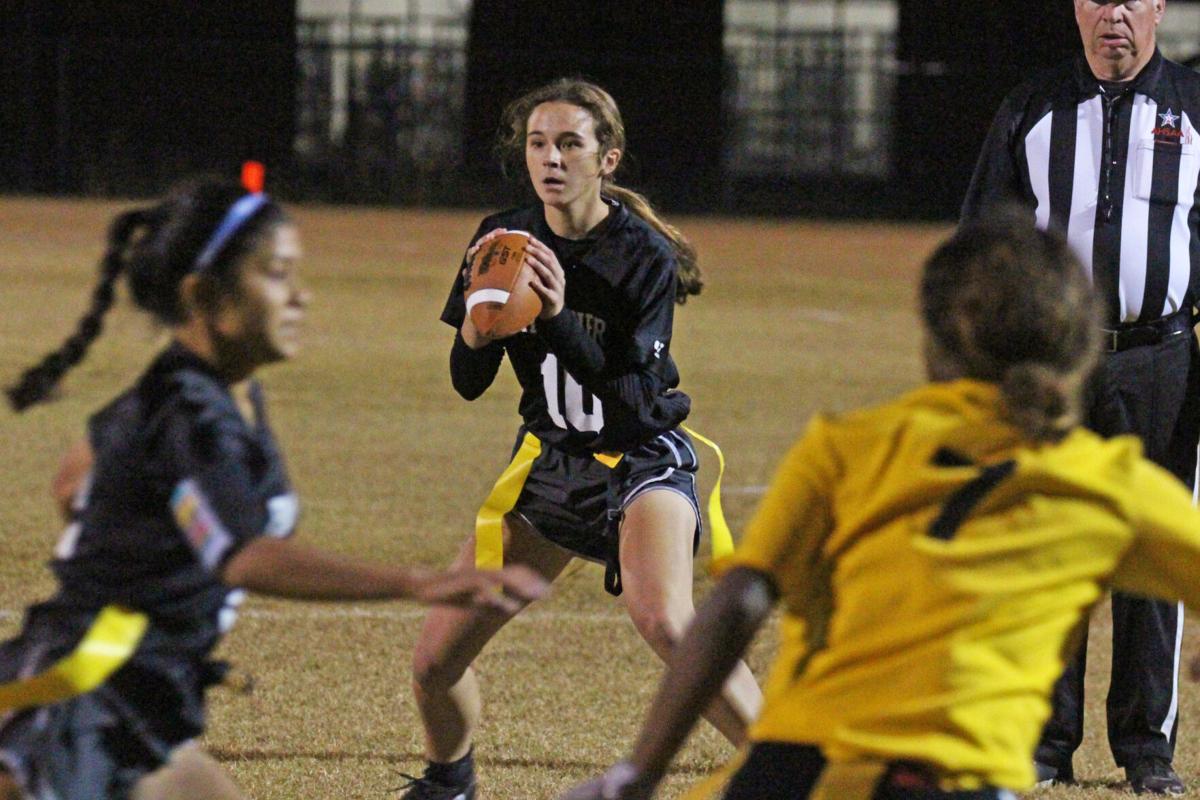 Smiths Station’s Brynn Repicky looks to pass against Wenonah in the quarterfinals of the AHSAA girls flag football playoffs on Nov. 8 in Smiths Station.

In this first-year sport, the Panthers have quickly been embraced and become recognizable figures in their community.

And along with the newfound fans and support, Smiths Station is now just one win away from becoming the first-ever state champion. The Panthers will square off against Hewitt-Trussville Wednesday for the state championship at 3 p.m. at Protective Stadium in Birmingham.

“It would prove a really big point,” Davis said. “It’s the first time I’ve ever been to a state tournament, or something like that, even though I’ve been playing softball since I got here.”

The Panthers may feel like they still have a lot to prove, but to their community, they are seen as local celebrities.

“I was at Dollar General and I was just checking out and this lady recognized my flag football shirt and was like, ‘Are you on the flag football team?’” Smith Station’s Rachel Whitmer said. “I was like, ‘Yes ma’am, I am.’ She’s like, ‘Oh my gosh, congratulations.’

“It’s crazy being seen out of school and people putting a lot into it. You can tell they care and they love what we’re doing and love how much we’ve accomplished.”

When the AHSAA announced in April that flag football was going to be a sanctioned sport in 2021, head coach Meg Larsen knew that Smiths Station needed a team.

Larsen wears many hats at Smiths Station, including being the female athlete weight training coach and she is a volleyball and tennis coach at the school.

Growing up, she always enjoyed football and constantly tells her team now that if flag football was offered when she was in school, it would’ve been her cup of tea. Larsen played intramural flag football at Auburn University and won a championship with her sorority.

So despite staying busy, Larsen applied to be the flag football coach and after an interview process was hired.

She went around talking to the girls that she teaches and coaches at Smiths Station inviting them to the tryouts. No previous football experience was needed as Larsen was looking for athletes that could be taught the game.

The Panthers ended up having 50 girls try out last May for the team.

The team is made up of Smiths Station athletes from all different sports. It’s about 50-50 on softball and soccer, while also having some track and volleyball athletes on the team as well.

With a roster made up of athletes from all different sports, the team could fall into cliques. Larsen has made sure they spend time together and they’ve become one team because of it.

“I feel like we’ve known each other for like years, girls I’ve only known for months,” Whitmer said. “It’s because a lot of the girls on the team are just really open, they’re just themselves. It’s very easy to get along with everybody and really build that team that we needed.”

Davis agreed and joked that with practices since May that have continued all season, the team had to love each other.

Along with the bonding through practices, workouts and games, Davis and Whitmer added that the team loves to go out to eat together — with the restaurant of choice being Acapulco’s.

The team’s morale is also boosted by its appointed hype leaders. Sabrina Fox helps gets everyone ready to go, while teammate Alana Tapia has broken the huddle every time this season.

Just like the team’s chemistry has been growing and developing throughout the season, the fan support has done the same. Larsen says that the fans started coming to games because it was a new sport, but as the playoffs inched closer, fans came because it’s been fun to watch and the team is doing well.

Along with Whitmer being recognized at Dollar General, Larsen has also run into supporters from other schools.

Larsen says she was recently recognized at the chiropractor, as the athletic director from Beauregard stopped her to talk about the team and when the next game was happening.

When the Panthers head off for the state championship game, they’ll get one final sendoff from the community similar to the sendoff for the semifinal game.

The sendoff was special for Whitmer as she was still in disbelief when describing it.

The team will arrive to school early, eat together and prepare for the game before walking through the entire school with their classmates and teachers cheering them on in the halls.

Last time, the band and cheerleaders were waiting out front to surprise the team and send them off with a performance.

The whole experience has been nothing like anything the team has ever experienced, but the run to the state championship brings back fond memories from Larsen’s own high school experience at Opelika.

All the fans going to the games, wearing matching shirts at the games and people all going to the same restaurant are some of the fond memories that she remembers from that time.

And now her team here at Smiths Station is making memories and inspiring another generation of students and fans in just their first year.

“To see my kids going through the experience that I did, there would be nothing more satisfying, nothing more complete than us to go up there and finish this off and win,” Larsen said. “I think my team has already built a legacy, they are already leaving a legacy with this being the first year ever of flag football and now being in the state championship game.

“How much bigger would it be if we came home with rings on our fingers? That’s definitely our ultimate goal, that’s definitely what we’re trying to get at. There’s not a lot in life that means a lot more to me right now than going up there and getting it done.”

Chiefs end up on top in potential game of the year

Lanett DL Caden Story announced Thursday that he will be choosing between Auburn, Clemson and Florida on Feb. 2. Story had been committed to Auburn before decommitting last week.

Former Opelika football player Jake Bentley announced he will be an offensive graduate assistant at Florida Atlantic. Bentley spent 2021 as a quarterback at South Alabama.

Auburn High linebacker Brad Harper committed to Jacksonville State on Friday night. Harper is fresh off a 125-tackle senior season for the Tigers.

Smiths Station’s Jenna Bruce runs with the ball against Wenonah in the quarterfinals of the AHSAA girls flag football playoffs on Nov. 8 in Smiths Station.

Smiths Station’s Brynn Repicky looks to pass against Wenonah in the quarterfinals of the AHSAA girls flag football playoffs on Nov. 8 in Smiths Station.