Duke safety Jaylen Stinson (16) returns a kick against Georgia Tech during the first half of a college football game on Saturday in Durham, N.C. 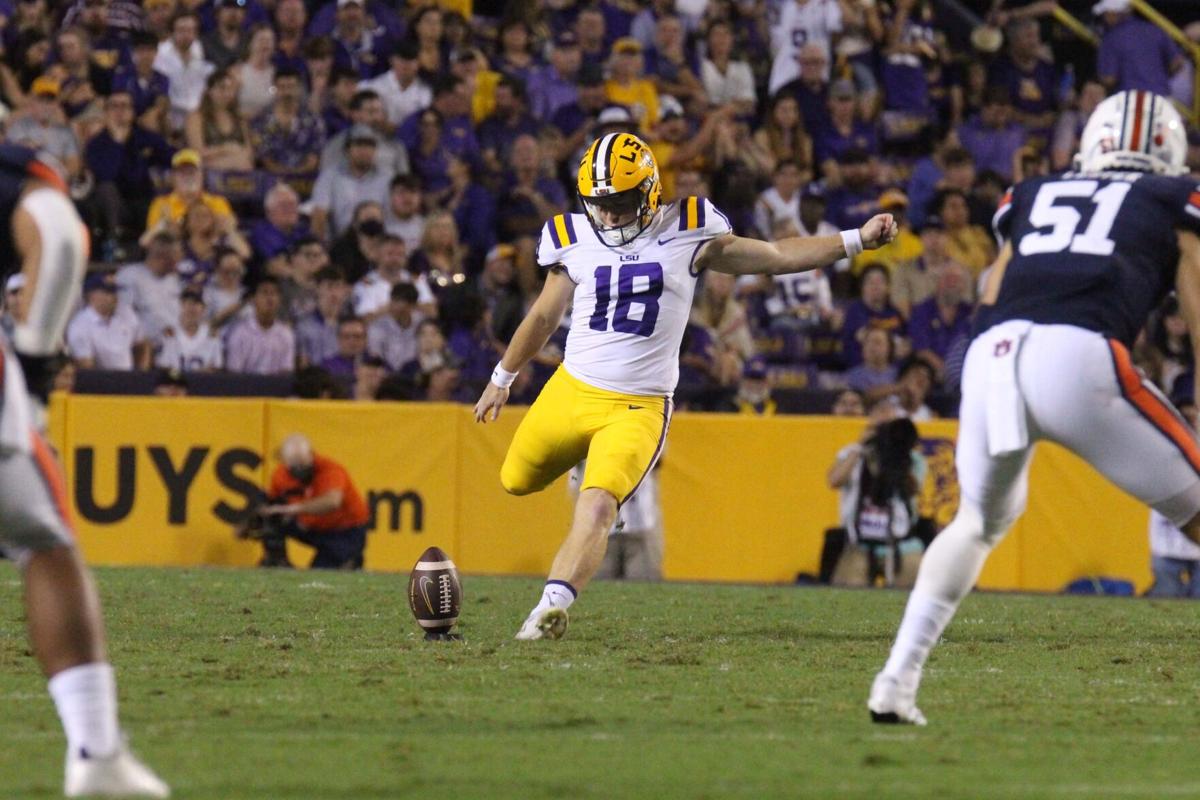 Former Auburn High kicker Avery Atkins kicks off for LSU during the Auburn football game at LSU on Oct. 2 in Baton Rouge, La.

One day after his little brother came up clutch for Opelika, former Bulldog star Jaylen Stinson did his part for the Duke Blue Devils.

Stinson helped the Blue Devils on defense and on special teams against Georgia Tech by recording two tackles and returning three kicks for 61 yards, the longest return going for 28 yards. While the sophomore safety did his part to keep Duke competitive, the Blue Devils wound up on the wrong side of a 31-27 contest.

Through six games this season, Stinson has 18 tackles, one tackle for loss and two pass break-ups. He’s had 14 kick returns for 281 total yards.

Stinson got involved as a true freshman with the Blue Devils last fall and was given the Bill Keziah Award as the team’s top special teams player. He recovered a muffed punt for a touchdown last fall against Virginia Tech and accumulated 12 tackles along with 355 kick-return yards.

Stinson arrived at Duke after being a three-year letterman at Opelika. His senior season in 2019 was a sensational one, as he recorded 67 solo tackles with one sack and one interception and helped the Bulldogs reach the Class 6A state semifinals.

Stinson’s efforts against the Yellow Jackets was part of a big weekend for his family. Stinson’s younger brother Jarell, an Ole Miss commit, recorded multiple tackles and delivered the game-clinching pass break-up in Opelika’s 21-20 overtime victory over Lee-Montgomery on Friday.

Here’s a roundup of the other former Friday night stars from the area who stood out this week at the collegiate level:

Avery Atkins, LSU — Atkins had three punts that averaged 53.3 yards and two touchbacks on two kickoffs in the Tigers’ 42-21 loss to Kentucky.

Brandon Crum, South Alabama — Crum started but did not record any statistics in the Jaguars’ 33-31 triple-overtime loss to Texas State.

Mohamoud Diabate, Florida — Diabate had seven tackles in the Gators’ 42-0 victory over Vanderbilt.

Garrett Morris, Penn — Morris had one tackle and two quarterback hurries in the Quakers’ 20-0 victory over Lehigh.

Griffin Speaks, Baylor — Speaks played but did not record any statistics in the Bears’ 45-20 victory over West Virginia.

Markail Benton, Jacksonville State — Benton had five tackles and 1.5 tackles for loss in the Gamecocks’ 28-24 victory over Stephen F. Austin.

Xavier Billingsley, Alabama A&M — Billingsley had one tackle in the Bulldogs’ 61-15 loss to Jackson State.

Jaxton Carson, North Alabama — Carson had three carries for six yards and one reception for two yards in the Lions’ 38-34 loss to North Carolina A&T.

Mason Cook, Georgia State — Cook played on the offensive line in the Panthers’ 55-21 victory over UL-Monroe.

Karon Delince, ETSU — Delince had five tackles and 0.5 tackles for loss in the Buccaneers’ 48-21 victory over The Citadel.

Terrell Gordon, Georgia State — Gordon had one tackle in the Panthers’ 55-21 victory over UL-Monroe.

Marquez Henry, ETSU — Henry had two tackles in the Buccaneers’ 48-21 victory over The Citadel.

Tyler Moore, Kennesaw State — Moore had one tackle in the Owls’ 34-15 victory over Hampton.

Jahlil Ryles, MTSU — Ryles played on the offensive line in the Blue Raiders’ 41-13 loss to Liberty.

Shawn Jennings, South Alabama — Jennings tied for the team-high with nine tackles in the Jaguars’ 33-31 triple-overtime loss to Texas State.

Kelcy Allen, Kennesaw State — Allen had a fumble recovery in the Owls’ 34-15 victory over Hampton.

Navy Harris, Troy — Harris played but did not record any statistics in the Trojans’ 27-24 victory over Georgia Southern.

Kye Robichaux, Western Kentucky — Robichaux had six carries for 31 yards in the Hilltoppers’ 52-46 loss to UTSA.

Ja’Won Howell, North Alabama — Howell played but did not record any statistics in the Lions’ 38-34 loss to North Carolina A&T.

Jake Bentley, South Alabama — Bentley was 19-of-26 passing for 189 yards with two touchdowns and one interception and rushed three times for 13 yards in the Jaguars’ 33-31 triple-overtime loss to Texas State.

Charlie Benton, UAB — Benton had one tackle in the Blazers’ 31-14 victory over Florida Atlantic.

Will Boler III, UAB — Boler had four tackles and a fumble recovery in the Blazers’ 31-14 victory over Florida Atlantic.

Deondrae Williams, Navy — Williams played but did not record any statistics in the Midshipmen’s 31-24 loss to SMU.

Tavarious “Truck” Griffin, Alcorn State — Griffin had one reception for 11 yards and a blocked punt in the Braves’ 24-20 victory over Grambling State.

Tyreic Martin, Alcorn State — Martin had two tackles and 0.5 tackles for loss in the Braves’ 24-20 victory over Grambling State.

High school football scoreboard: Opelika advances to the third round, Auburn High and Central to battle in 7A semifinals

Scores from across the area as high school football teams compete in the postseason:

After the win, Smiths Station held up four fingers. The Panthers are one of four teams left vying for the first-ever girls flag football state title.

Duke safety Jaylen Stinson (16) returns a kick against Georgia Tech during the first half of a college football game on Saturday in Durham, N.C.

Former Auburn High kicker Avery Atkins kicks off for LSU during the Auburn football game at LSU on Oct. 2 in Baton Rouge, La.