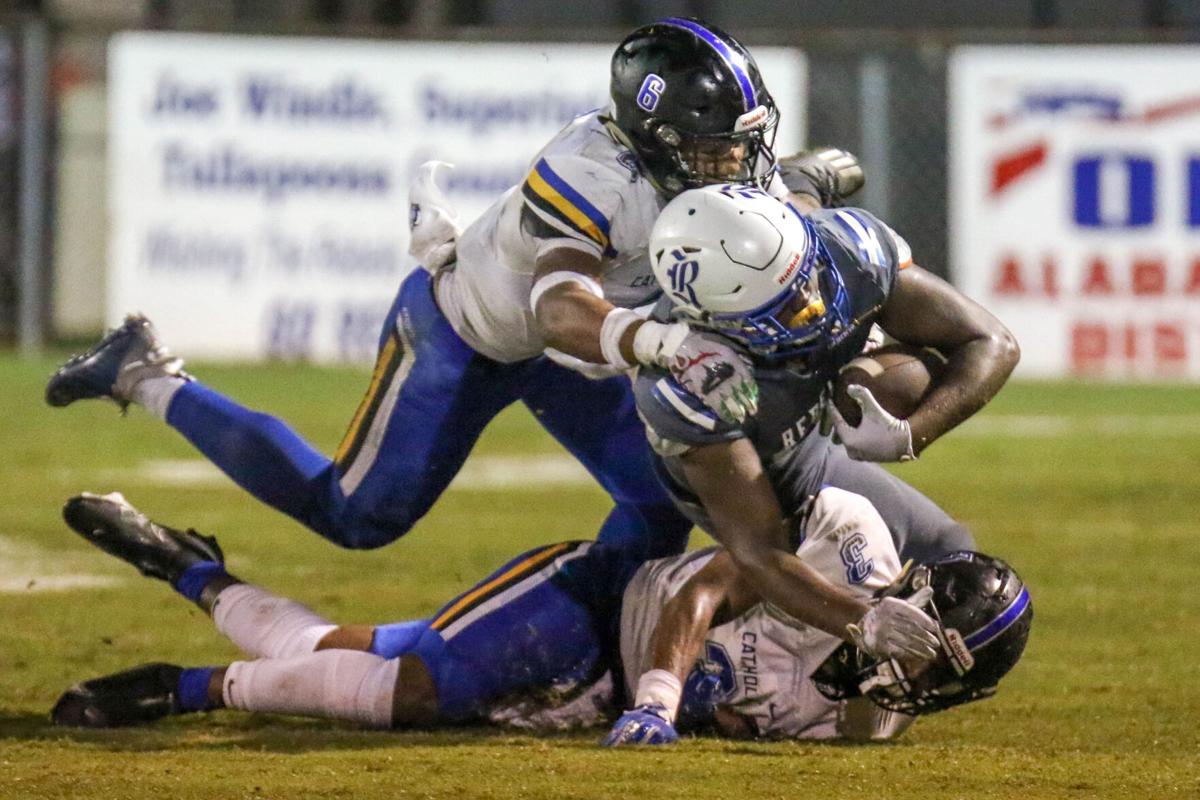 Reeltown's Sedarico Brooks (11) dives over a defender while being tackled during the team's game against Montgomery Catholic on Friday in Reeltown. 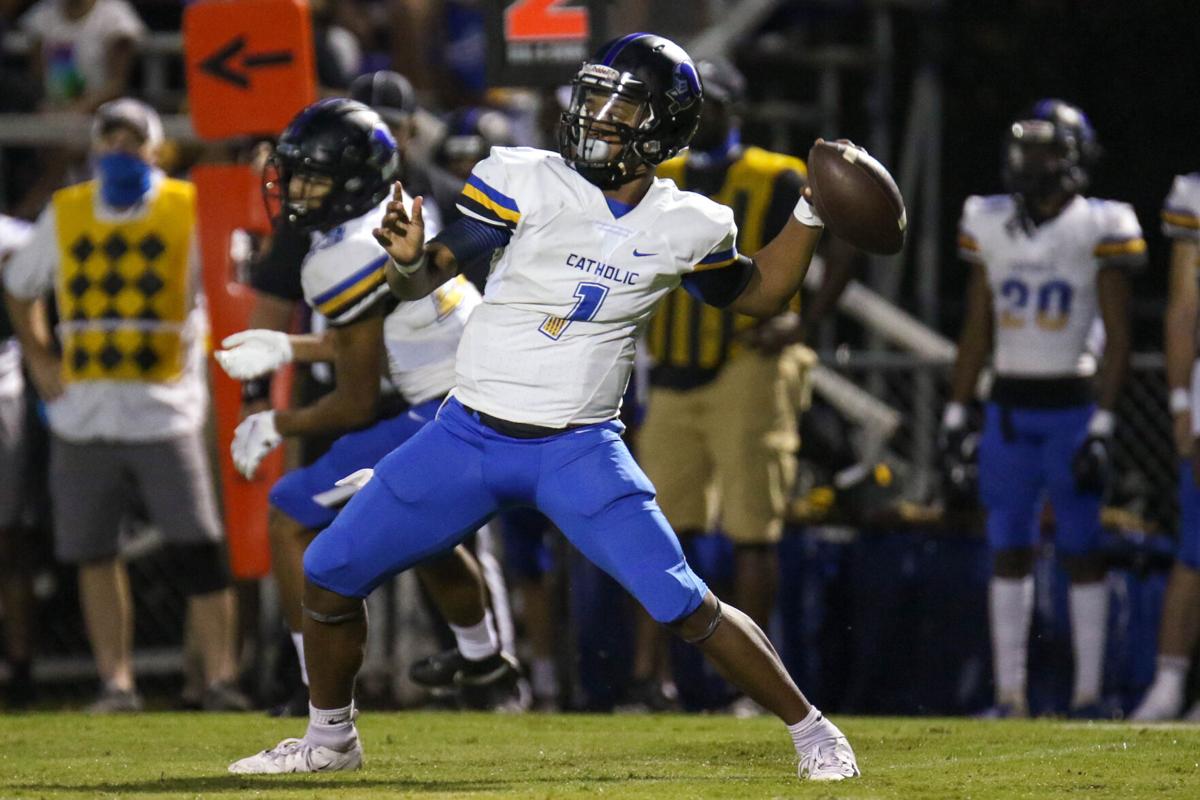 REELTOWN — After an hour-and-a-half lightning delay Friday, the Reeltown Rebels finally returned to the field to square off with Montgomery Catholic.

But even though the storms in the sky finally dissipated, it was the Knights’ aerial attack that struck the Rebels early and often.

Reeltown (2-2, 1-1) had no answer for Montgomery Catholic’s Caleb McCreary, who threw for 256 yards and a pair of touchdowns en route to a 35-20 victory for the Knights. The loss was a tough blow for the Rebels, who fell one game behind the Knights in what is sure to be a tight race in Region 4-3A.

The Rebels jumped on the board late in the first quarter after Gabe Bryant’s 38-yard pass to Marcus Haynes set up a two-yard touchdown run, but Montgomery Catholic answered right back and only got rolling from there.

The Knights answered Brooks’ score nearly two minutes later when Caleb McCreary hit DJ Carter for a 39-yard touchdown, and the extra point gave them a slim 7-6 lead. The lead held steady into the second quarter when McCreary really got into a rhythm, completing two consecutive passes for 56 yards to set up Jeremiah Cobb’s 19-yard touchdown run.

Cobb’s scamper to the end zone left Reeltown down 14-6 with 8:08 remaining before halftime.

After another promising Reeltown drive stalled out, McCreary returned from the sideline ready to fling the ball downfield. He connected on yet another deep ball — this to Myles Butler for a 38-yard gain — before TJ Dudley pushed his way forward on a seven-yard touchdown run with under five minutes to go in the quarter.

The Rebels tried to keep it a two-possession game going into the break, but McCreary and the Knights were relentless.

Following a Reeltown three-and-out, McCreary delivered what was arguably his most devastating drive, picking apart the Rebels by picking up 49 yards over five passes. His sixth pass put the game effectively out of reach, as he hit Butler for an 11-yard touchdown to leave the Rebels in a 28-6 hole with under one minute left in the first half.

Reeltown came out of the locker room and delivered the answer it desperately needed. Bryant led a seven-play, 71-yard drive in which the Rebels leaned heavily on its own passing game, and Brown ended the possession with a four-yard score to cut Montgomery Catholic’s lead to 28-13 with 9:07 to go in the third quarter.

Unfortunately for the Rebels, the Knights came right back with a score of their own.

Carter found a crease and took off for a long kick return to the Reeltown 29-yard line, setting Montgomery Catholic up well for another scoring drive. Five plays later, Cobb was in the end zone again, this time on a one-yard run that left Reeltown trailing by 22 nearly midway through the third.

Bryant added seven more points on a beautifully-lofted touchdown pass to Logan Lee in the game’s final minutes, but it was not enough to help the Rebels overcome the damage already done.

Reeltown will try and get back on track Friday when it travels to Goshen for region play. Montgomery Catholic, meanwhile, will host Beulah.

Which local high school football teams are playoff bound? Here’s the outlook with 2 weeks to go

With only two weeks to go for AHSAA and AISA football teams, the playoff picture is becoming clearer. Here's a detailed breakdown where things stand for all local teams.

The Auburn High volleyball team hopes to punch its ticket to the state tournament Thursday at the regional tournament.

Opelika alum Jake Bentley made plays throughout South Alabama's game against Georgia Southern and scored five touchdowns in a win. Check out what other local legends did this week.

Auburn High and Opelika will be well represented in the Alabama-Mississippi All-Star game this year.

Reeltown's Sedarico Brooks (11) dives over a defender while being tackled during the team's game against Montgomery Catholic on Friday in Reeltown.