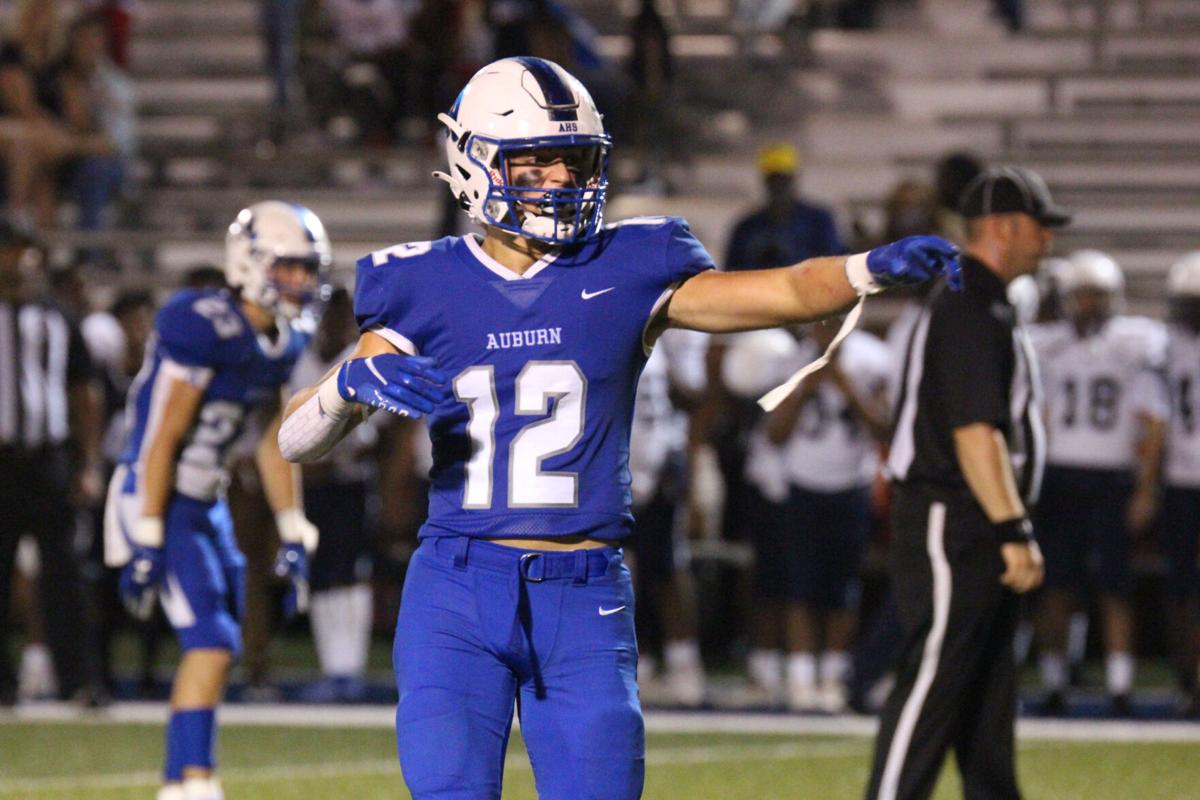 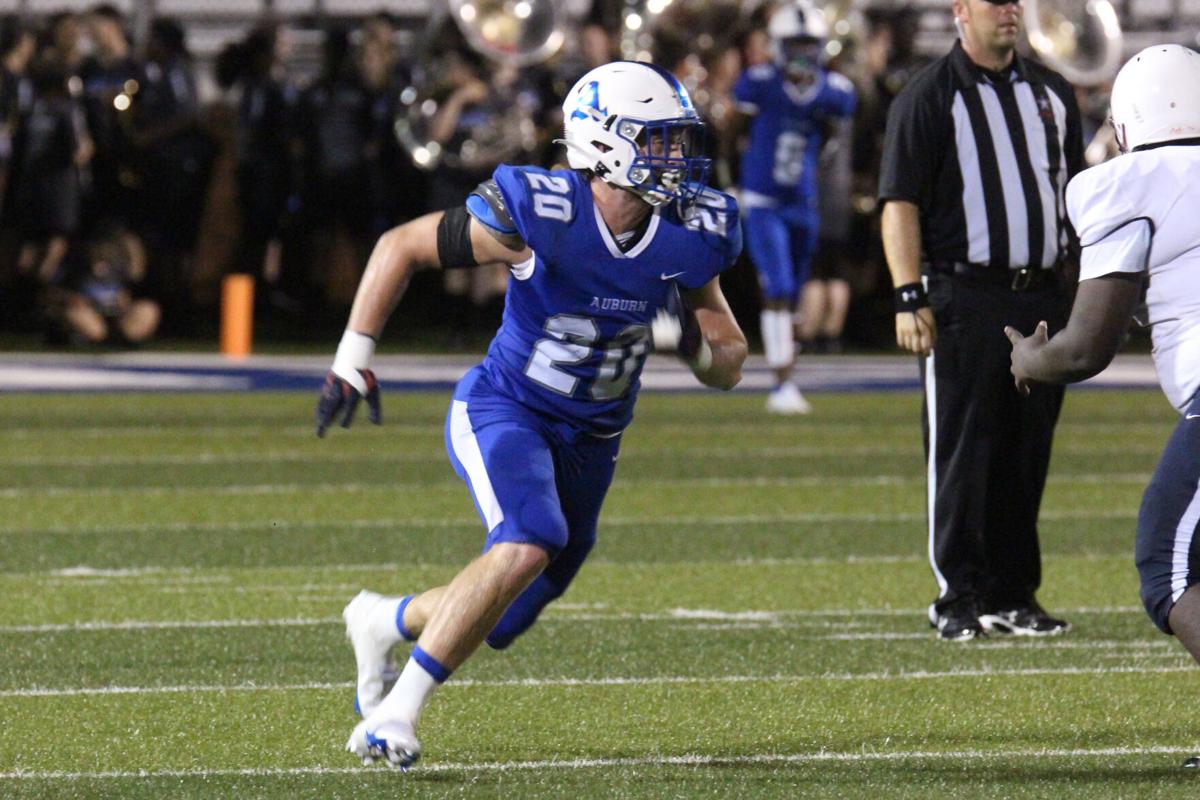 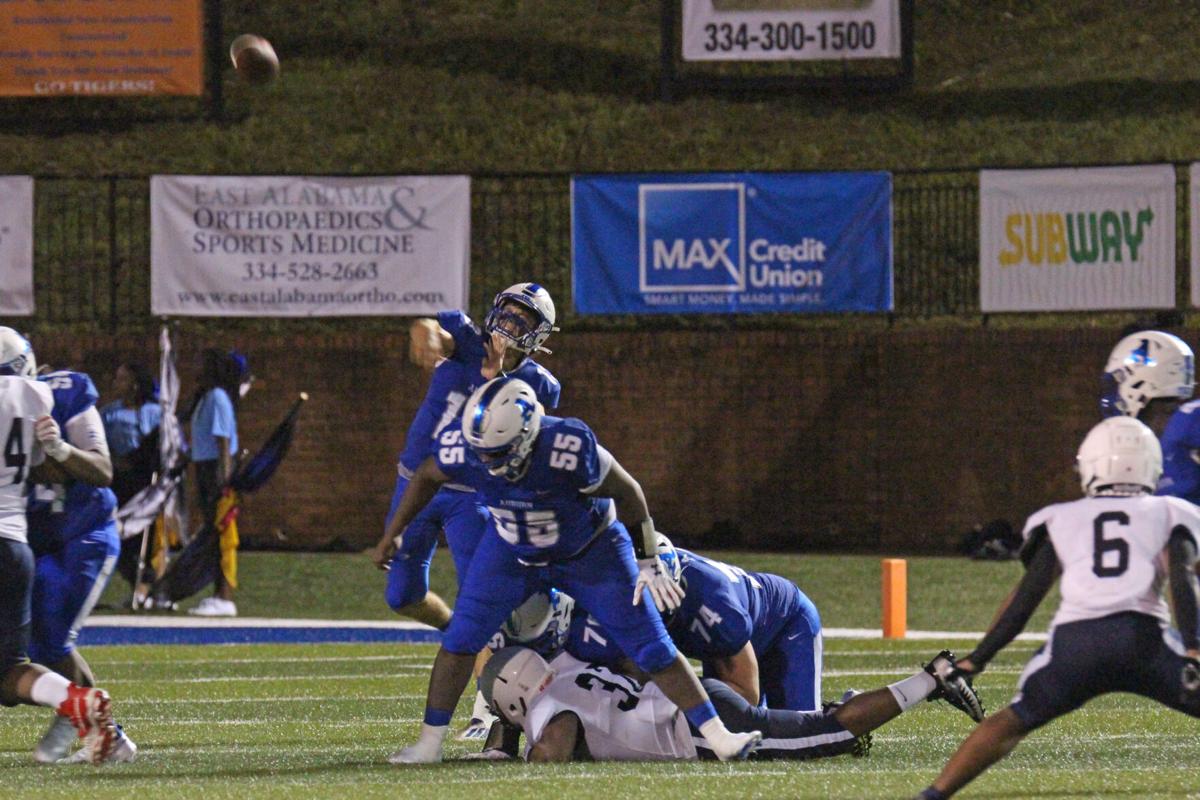 JUSTIN FERGUSON For the O-A News

Three days ago, Auburn High had a “tough practice.”

First-year Tigers head coach Keith Etheredge chuckled to himself when he recalled that fact Friday night. That’s because, after bouncing back on the practice field Wednesday and

Thursday, Auburn made it look like it was always going to be smooth sailing in its season opener.

Auburn put together a comprehensive blowout victory in its first game under Etheredge on Friday night, shutting out visiting Park Crossing 45-0 at Duck Samford Stadium.

“It feels great, just to get a win under our belts,” Etheredge said.

Junior quarterback Clyde Pittman had half of the Tigers’ touchdowns — two through the air and one on the ground — and sophomore quarterback Davis Harsin added another passing touchdown to get the high-powered Auburn offense rolling. Senior wide receiver Bakari Dailey caught a touchdown pass from both quarterbacks, while senior running back Killian Massey punctuated the victory by powering home a short touchdown run in the fourth quarter.

Auburn’s defense was relentless throughout the game, forcing several turnovers and only allowing Park Crossing to cross midfield once. Two plays after the Thunderbirds got into Tigers’ territory for the first time, senior linebacker Brad Harper picked up a fumble and nearly returned it for a touchdown.

It would have been Harper’s second touchdown of the game, as he took a snap as a wildcat quarterback and scored from close range after Park Crossing fumbled the ball away at its own 1-yard line on the previous drive.

“Our defense did a great job, causing a bunch of turnovers this week,” Etheredge said. “I think we’re gonna get better and better in that department. We did a great job putting pressure on their quarterback.”

The senior linebacker duo of Powell Gordon and Klark Cleveland spent plenty of time in the Thunderbirds’ backfield, while classmate Nasir Pogue came down with an interception that he nearly housed for a pick-six — only for it to be called back for a penalty.

If there were any big negatives from Auburn’s victory, they came in the form of yellow flags. The Tigers had an early punt return touchdown called back for a penalty, along with two separate pick-sixes.

“We knew that coming in, that we were gonna be able to make plays,” Etheredge said. “We’ve got some playmakers. I just wish we wouldn’t have shot ourselves in the foot so many times. Made some big plays, got them called back. Made a big play, got it called back. We’ve just got to be able to finish those plays and keep those points on the board.

“But our offense did a good job putting it back in the end zone.”

Pittman’s first touchdown pass, a 36-yard catch-and-run for Dailey on a well-designed screen, came just three plays after the punt return was called back. The points from Pogue’s interception return weren’t off the board for long, either, as Harsin placed a perfect pass to Dailey in the back of the end zone from 23 yards out. Harper’s negated pick-six and his wildcat touchdown were separated by only a handful of plays and a brief torrential downpour.

Auburn added three more points to its 28-0 halftime lead in the middle of the third quarter, when senior kicker Josh Owsley hit an impressive 44-yard field goal — he wasn’t even set when the ball was snapped and had to hit it off a single step.

The Tigers and the Thunderbirds played with a running clock in the fourth quarter, but Auburn’s swarming defense still gave the offense good enough field position to find the end zone two more times.

“We got a lot of people in, we played a lot of guys,” Etheredge said. “I would have liked to have played a few more, but we ran the clock in that fourth quarter — we’re not looking to run the score up or anything like that. So we want kids to have a good time playing this game. They had a couple of guys banged up, so we didn’t want to take the risk of more of their guys getting hurt.”

Auburn will look to carry the momentum from this complete victory onto the road next Friday night against bitter rival Opelika.

“We’ve got a bunch of great kids,” Etheredge said. “We’re just happy. It’s a great time to be a Tiger.”

Who has the edge in the NL Wildcard race?

What to expect with Justin Fields at the helm

What to expect with Justin Fields at the helm

D'quez Madden led Lanett to the rivalry win, while Auburn High and Reeltown raced away with region wins.

Friday’s non-region game between Auburn High and Bob Jones has been moved to Duck Samford Stadium.

LOACHAPOKA — The top-10 matchup between No. 6 Loachapoka Indians and the No. 4 Maplesville Red Devils would end in lop-sided fashion with the …

Opelika’s defense led the way on a sloppy, soaked night in Montgomery, and the Bulldogs defeated Carver-Montgomery 28-6 on Thursday in Cramton Bowl.

This week's East Alabama Orthopaedics and Sports Medicine Player of the Week is Auburn High's Clyde Pittman, who looks to build off his strong performance against Dothan last week.

The latest week of high school football action proved to be a productive one for the area teams. As a result, there's a few notable changes in this week's Prep Power Poll.

Neither rain nor change in venue stopped Lanett running back D’quez Madden on Friday night.