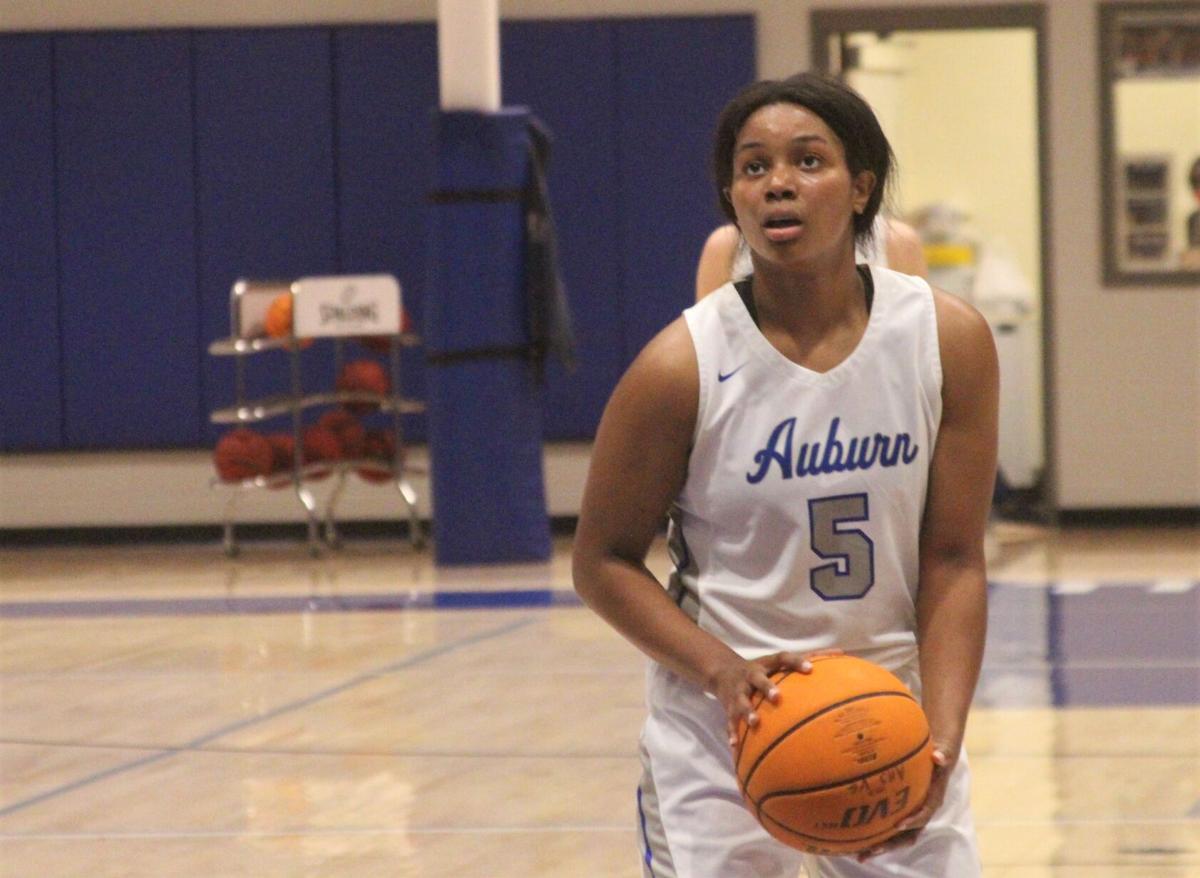 Auburn High's Olivia Porter shoots a free throw during the second half of the Lady Tigers' game against Central-Phenix City on Feb. 12 in Auburn. 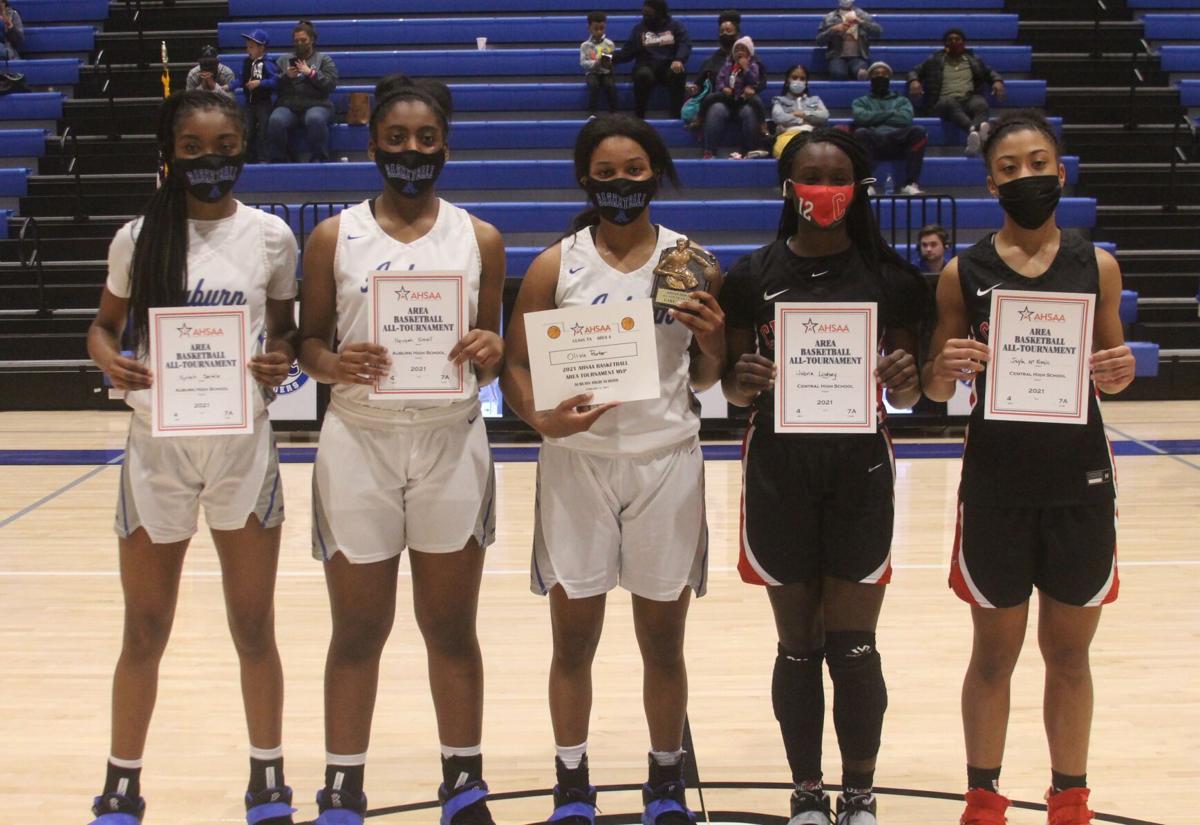 Auburn High's Syriah Daniels, Nevaeh Small and Olivia Porter along with Central-Phenix City's Jabria Lindsey and Jayla McKissic were named to the All-Area 4-7A Tournament team on Feb. 12.

Over the last few years, the Auburn High girls have battled back and forth with Central-Phenix City for the right to call themselves area champions.

On Friday, Olivia Porter and Syriah Daniels made sure the Lady Tigers got the upper hand over the Lady Red Devils once again.

Porter posted a game-high 21 points and Daniels contributed 16 to help the Lady Tigers pull away after halftime toward a 56-41 victory in the Area 4-7A tournament title game. Their performances were instrumental in setting the stage early for Auburn, which will be back in action at home Thursday to start the subregional round of the Class 7A state tournament.

The Lady Tigers entered the second half with a 10-point lead and wasted little time in putting the game out of reach.

Daniels came out of the locker room firing, as she hit a 3-pointer in the third quarter’s opening seconds to set the tone for the next eight minutes. Minutes later, Porter’s steal and immediate layup handed Auburn a 14-point lead with 2:07 to go until the fourth.

The Lady Red Devils had plenty of looks that did not fall, and the Lady Tigers took advantage by scoring 15 points in the third to enter the final eight minutes with a 17-point lead.

From there, the Lady Tigers worked the clock while Porter piled on even more points to her total. The junior worked her way to the basket over and over to ensure a late Central rally – despite Jabria Lindsey’s best efforts – was not possible.

Porter took home tournament MVP honors. Daniels and Nevaeh Small were named to the All-Tournament team for Auburn, while Lindsey and Jayla McKissic were named to the team for Central. Lindsey had a team-high 11 points against the Lady Tigers, while McKissic contributed eight.

Auburn jumped ahead almost immediately in the first half, and though Central showed some fight the Tigers maintained control.

Porter found a groove early and contributed four of Auburn’s first nine points as the Lady Tigers jumped out to a 9-4 lead in the first four-and-a-half minutes. Daniels put the finishing touches on the quarter with a 3-pointer to leave Auburn up six entering the second.

Auburn picked up where it left off in the second with four quick points kick-started by Daniels’ steal and coast-to-coast layup.

McKissic brought the Lady Red Devils within five with 1:05 left before the break, but Auburn answered with five more points — the last three on Daniels’ 3-pointer in the final seconds courtesy a Porter assist — to hand the Lady Tigers a 10-point lead at halftime.

“I'm so excited about her future and about what's going to be able to do in this program,” Pritchett said of Daniels, who also had six rebounds, two assists and four steals. “She is a really good basketball player, and her length and now having the ability to knock down the three – she works on it so much. I was just so excited to see the 3's fall tonight for her and see her momentum go through the roof. She's a great sense of energy for our team.”

The Lady Tigers took the victory as a chance to celebrate, but Pritchett made it clear that party wouldn’t last long. Auburn will soon turn its attention to the next opponent for the start of a string of games where the bottom line is win or go home.

“This is over,” Pritchett said. “We're the area champs. We can enjoy that tonight, but tomorrow we've got to get back to work.”

"We are going to build this program to be something that those boys and this community are going to be proud of. I can guarantee it."

The Lanett girls got the better of LaFayette on Thursday, as the Panthers surged ahead in the third quarter then held off a late Lady Bulldogs’ rally to secure a 53-47 victory.

Antonial Ware and the Notasulga Blue Devils simply could not be stopped in the second half as Notasulga dominated in a 69-51 victory to push the team to the Class 1A state semis.

Auburn High's Olivia Porter shoots a free throw during the second half of the Lady Tigers' game against Central-Phenix City on Feb. 12 in Auburn.

Auburn High's Syriah Daniels, Nevaeh Small and Olivia Porter along with Central-Phenix City's Jabria Lindsey and Jayla McKissic were named to the All-Area 4-7A Tournament team on Feb. 12.