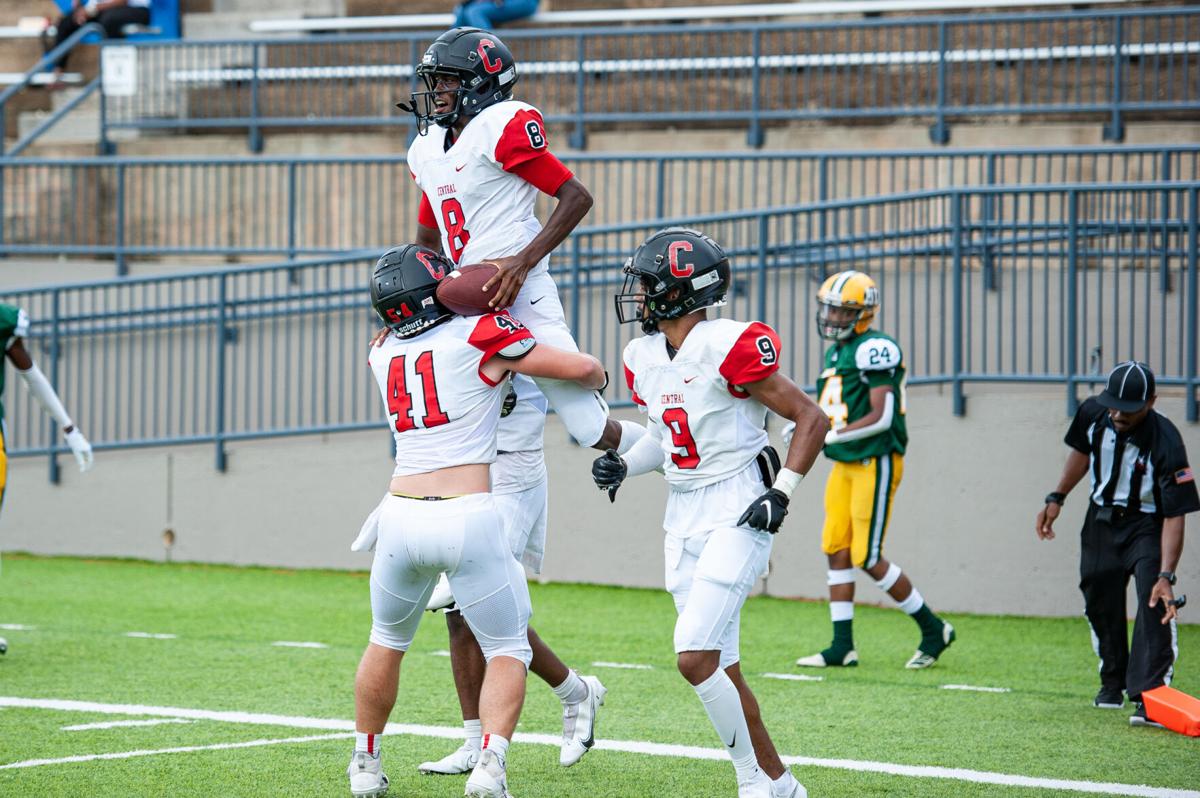 Central-Phenix City’s Trey Miles (8) celebrates with teammate Colby Smith (41) after a touchdown run against Jeff Davis on Sept. 12, 2020, in Montgomery. 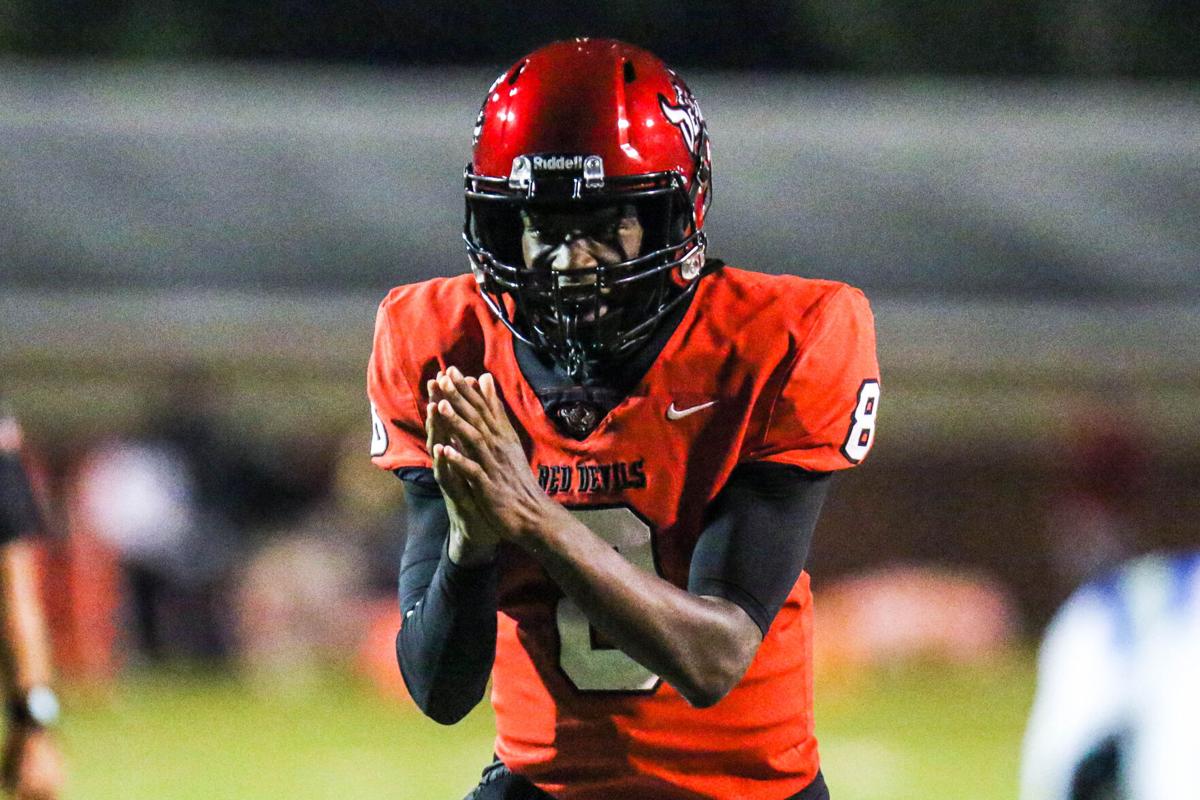 Central quarterback Trey Miles (8) waits for the snap during the Auburn High vs. Central high school football game on Oct. 2 at Garrett-Harrison Stadium in Phenix City.

Former Central-Phenix City quarterback Trey Miles’ path to this point hasn’t been an easy one.

Miles bided his time with the Red Devils through his first three years, initially as a third-string quarterback behind Memphis quarterback Peter Parrish and Bowling Green quarterback Tucker Melton before splitting time with Melton in 2019. Miles seemed set to start in 2020 before a coaching change brought in new head coach Patrick Nix and his son, junior quarterback Caleb Nix.

Caleb Nix’s arrival led to a carousel at quarterback and left Miles splitting time behind center for the second straight season. The coronavirus pandemic only complicated things for Miles, as his recruiting options and chances to show out in from of coaches were limited compared to a typical year.

Despite the obstacles, Miles has continued working hard in hopes of making his dream of playing college football come true. In the last few days, he has taken considerable strides in making that happen.

Miles, who is attending a prep academy in Georgia and has reclassified into the 2022 class, has received scholarship offers from Kansas State and UAB since Monday. The 6-foot-1, 175-pound Miles is drawing interest following a senior season with the Red Devils in which he completed 49 passes for 802 yards with seven touchdowns and one interception while also rushing 65 times for 449 yards and six more scores.

“It means a lot in terms of the type of offers they are. Both are FBS, and K-State is a Power-5 offer. Those don’t come easy,” said Miles, who is listed as a quarterback as well as a defensive back. “It has been a rough ride. I didn’t get a chance to start at my position, but I always worked and played as if I was the starter. That’s what kept me going. I never felt defeated. I was blessed with an opportunity to reclassify and didn’t let pride stop me.”

Miles explained the importance of having his family’s full support, which has allowed him to train and work hard at his craft. He said he’s trained six days a week since February, which includes two sessions every Tuesday and Thursday.

Miles is one of many college prospects who went the prep academy route in hopes of being picked up in the next recruiting cycle. For Miles, that decision came down to his own belief in his abilities.

“I knew that I could attract college coaches if given the opportunity to be seen by them. I’m a true athlete, humbly,” Miles said. “I’ve always trained and worked hard on the small things. My dad made it a way of life. We just need the opportunity to show it just like a lot of other guys I know. [Going to a prep school] seems like being stagnant to some people, but we saw it as getting back that year that was lost.”

Miles explained one of his most important factors in picking a school is finding somewhere he can actually play rather than just be on the team. Additionally, he is looking for a program that will make him an asset and help him develop into the best player and man he can be.

Miles has encountered plenty of bumps in the road over the last few years, but he’s done his best to keep his head down and continue working. That perseverance has Miles poised to play college football, and that moment is one that can’t get here soon enough.

“My dream is to play college football at a high level, and that possibility has become even closer now,” Miles said. “I’ve been working on that since I was 6 years old. I always played both sides of the ball. I never left the field in games until eighth grade. That’s when school ball locked me in at QB. I have God-given athleticism that allows me to play several positions well, but my two favorites are QB and DB.”

Here’s a quick look at some of the other local athletes who received offers or visited schools in the last few days:

Did we miss a local athlete who has received a scholarship offer or visited a school? Email us at sports@oanow.com, and we’ll include them in next week’s story.

Are the Green Bay Packers pretenders?

Could Arkansas keep their impressive start going against Texas A&M (-4.5)?

Could Arkansas keep their impressive start going against Texas A&M (-4.5)?

The White Sox are AL Central Champs, but can they make a run?

The White Sox are AL Central Champs, but can they make a run?

The Opelika girls flag football team showed out in its debut by besting Loachapoka 46-0 on Thursday. The Lady Bulldogs dominated on offense and also delivered two pick-sixes.

Friday’s non-region game between Auburn High and Bob Jones has been moved to Duck Samford Stadium.

Georgia State's Terrell Gordon and Mason Cook will be back in East Alabama when the Panthers play Auburn on Saturday after making the two made their names at Central-Phenix City.

Less than a year after leading Auburn High to the state title game, quarterback Matthew Caldwell made started for Jacksonville State on Saturday and led the Gamecocks to a win.

Lee-Scott runs over Springwood for another win

Lee-Scott shut out Springwood on Thursday night to add another win to an impressive start to the season.

This week's East Alabama Orthopaedics and Sports Medicine Player of the Week is Opelika's Kaden Cooper, who ran hard early and often in the Bulldogs' victory over Carver-Montgomery.

The latest week of high school football action proved to be a productive one for the area teams. As a result, there's a few notable changes in this week's Prep Power Poll.

Javuntae Holley ran in the game-winning touchdown in the final minute, and Dadeville came back to beat LaFayette 15-12 on Friday night in a thriller.

Central-Phenix City’s Trey Miles (8) celebrates with teammate Colby Smith (41) after a touchdown run against Jeff Davis on Sept. 12, 2020, in Montgomery.

Central quarterback Trey Miles (8) waits for the snap during the Auburn High vs. Central high school football game on Oct. 2 at Garrett-Harrison Stadium in Phenix City.