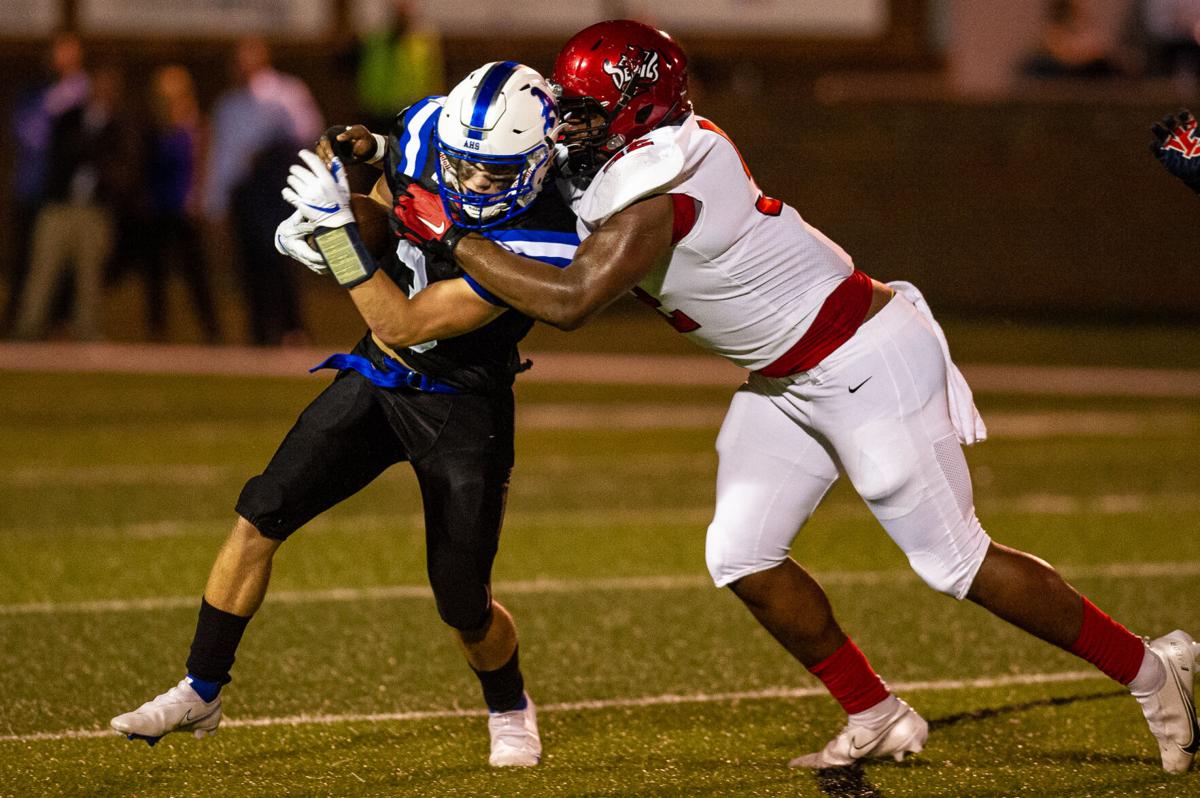 Central’s Makhi Gilbert (92) tackles Auburn’s Killian Massey (3) for a loss in the first half. Auburn vs Central on Friday, Oct. 1 in Auburn, Ala. 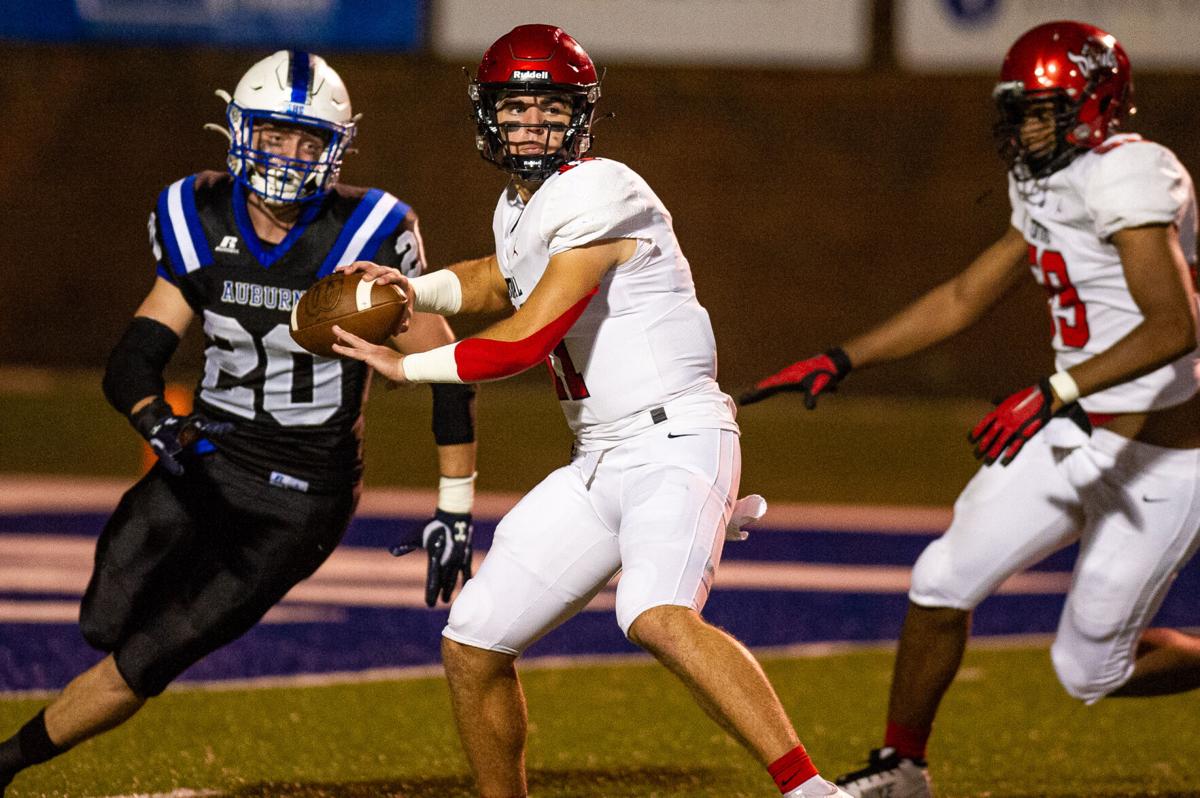 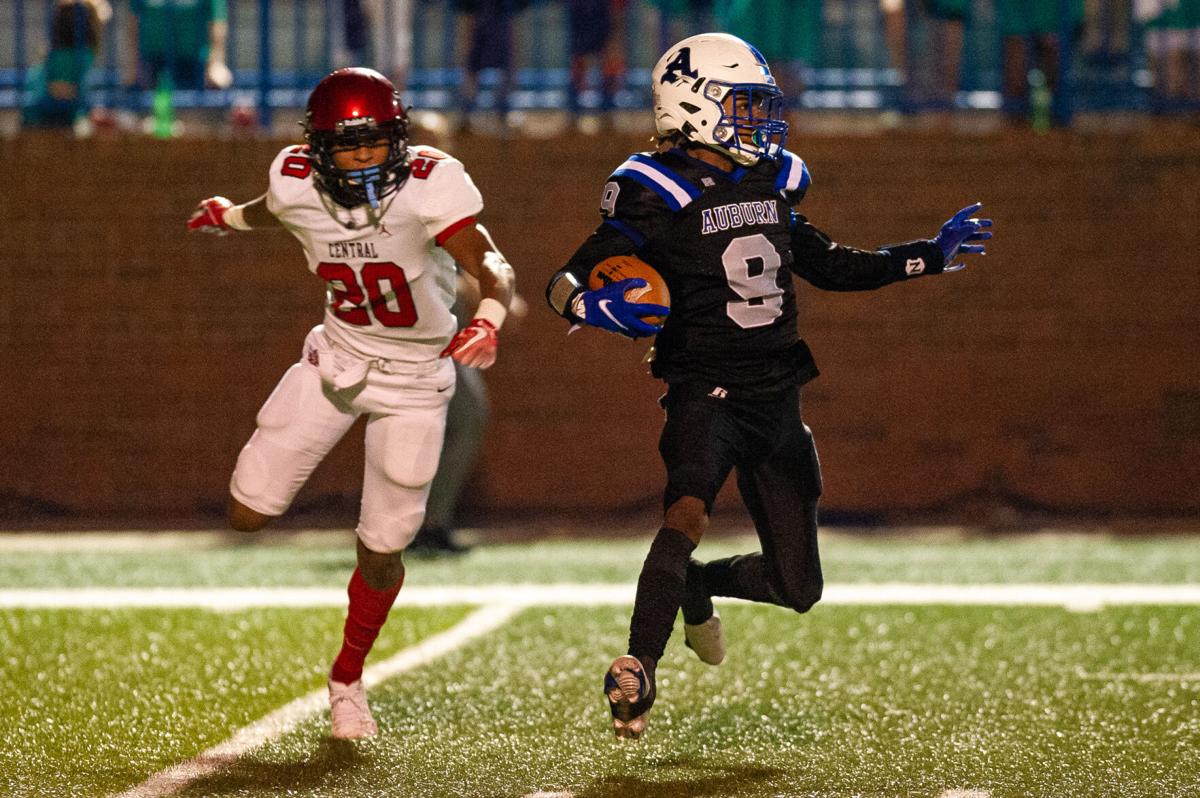 Auburn’s Bakari Dailey (9) returns a kickoff in the second half. Auburn vs Central on Friday, Oct. 1 in Auburn, Ala.

“If you’re not motivated for this one, then we’re in the wrong thing,” Nix said simply.

It’s the Tigers and Red Devils again. It’s for a trip to state again.

“I don’t think motivation is going to be much of an issue for this game.”

This year’s Class 7A semifinal between Auburn High and Central marks the third consecutive year that the region foes have met in this stage in the playoffs.

Over at Auburn High, the atmosphere surrounding Friday’s game is just as excitable as in Phenix City. Auburn High kicker Josh Owsley has answered countless questions about it from his classmates leading up to the showdown.

“I’ve got a lot of questions about, ‘are y’all going to win?’ I’m just like, ‘I mean, I hope so, that’s the plan,’” Owsley said. “Everyone’s been talking about it, and we know if we lose this could be our last game. I think that’s going to make us play a lot harder than usual.”

The latest installment in the rivalry series will take place in Central’s backyard at Garrett-Harrison Stadium, thanks to the Red Devils defeating Auburn High during the regular season in a game that ultimately crowned the region champion.

But even with Central’s win in the regular season this year, both teams still made the playoffs and had a feeling that they would meet again.

The two teams have played each other a combined six times in the last three seasons.

“It’s crazy that the same exact thing has happened the last two years, so it’s kind of expected at this point,” Auburn High senior linebacker Powell Gordon laughed. “We lose to them the first time, and we’re like all saying, ‘We’ll see them again in the semifinals,’ because it’s just expected.”

Auburn High’s been hungry for the rematch with Central, and it’s been something that head coach Keith Etheredge says the team has been talking about since the defeat in the regular season.

Once the playoffs arrived, the Tigers still had to get through their first two playoff opponents to get to this point.

Auburn High defeated Baker 39-3 in the first round and followed that up with a 56-21 win over Enterprise in the second.

The Red Devils first defeated Daphne 38-7 and then set a program record for the most points scored in a single game in their 77-41 thumping of Theodore in the second round.

With talent on both sidelines, this week’s game will be a showcase of some of the state’s best players. Etheredge and Nix both agreed that each roster is full of talented players with few weaknesses on either side of the ball.

“Their quarterback [Caleb] Nix is pretty good,” Gordon said. “He can scramble better than anyone else we’ve played against. So that’s something that you’ve got to look out for.”

When the final whistle sounds Friday night, either Auburn High or Central will be heading to the state championship game for the third year in a row.

And while both teams have been in the title game before, they both know what the ultimate goal is.

“It would mean the world just to get back because we fell short last year,” Gordon said. “I don’t know how to describe it. The first year we lose to them in the semifinals, the second year we get to the state championship, so it’s like this year I want to take it a step further.”

Central’s Makhi Gilbert (92) tackles Auburn’s Killian Massey (3) for a loss in the first half. Auburn vs Central on Friday, Oct. 1 in Auburn, Ala.

Auburn’s Bakari Dailey (9) returns a kickoff in the second half. Auburn vs Central on Friday, Oct. 1 in Auburn, Ala.