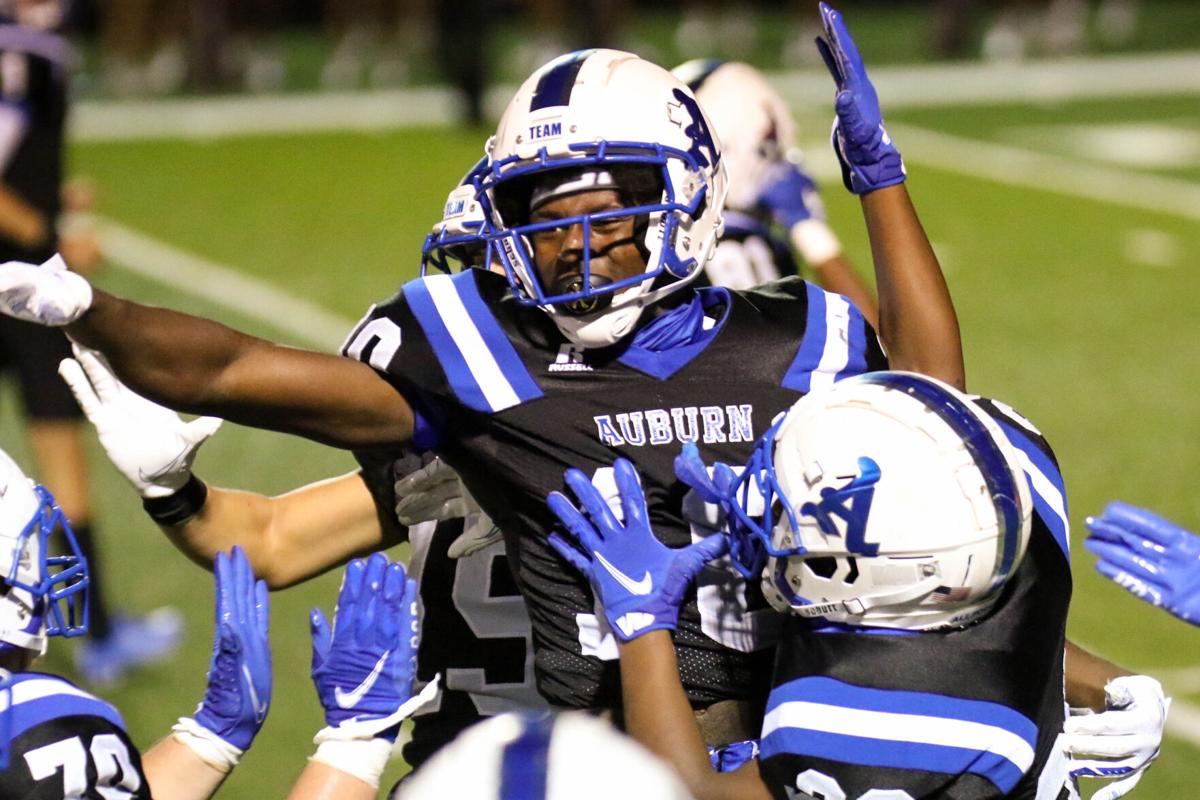 Auburn High's Burnard Thomas (10) celebrates the tide-turning touchdown with his teammates during Auburn High's win over Prattville on Friday at Duck Samford Stadium. 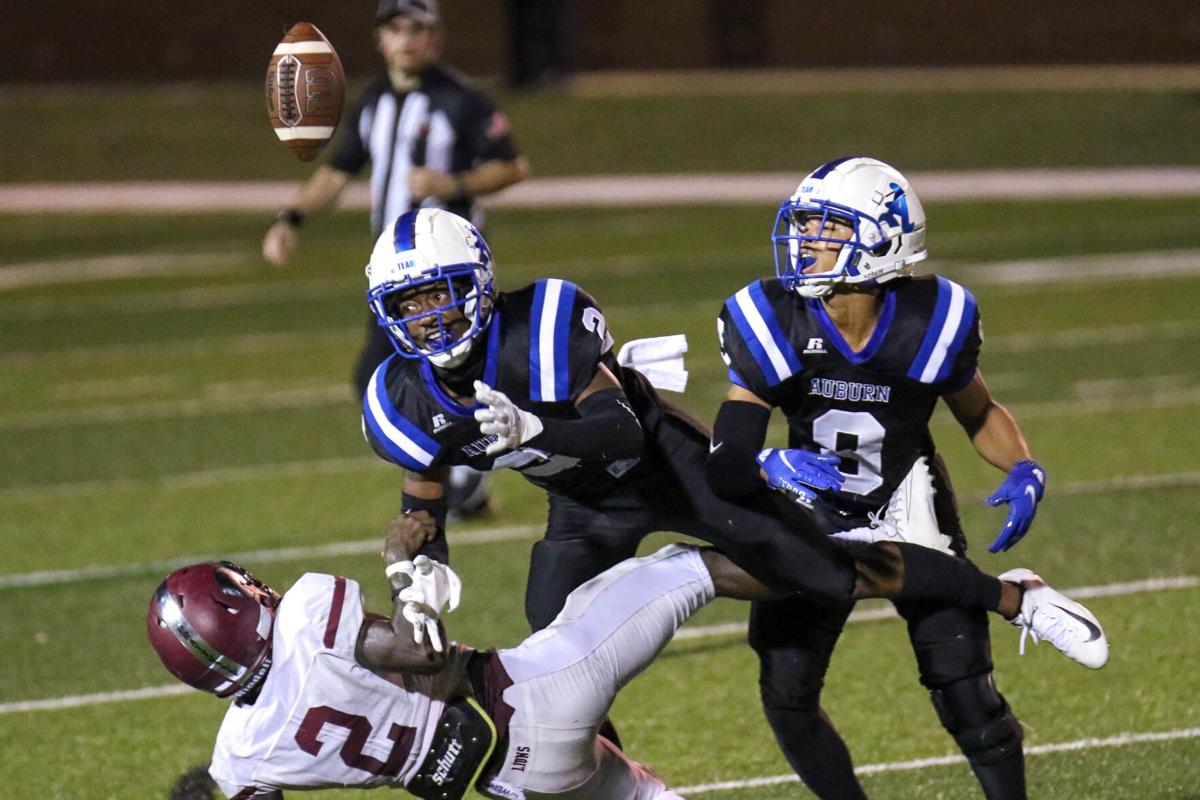 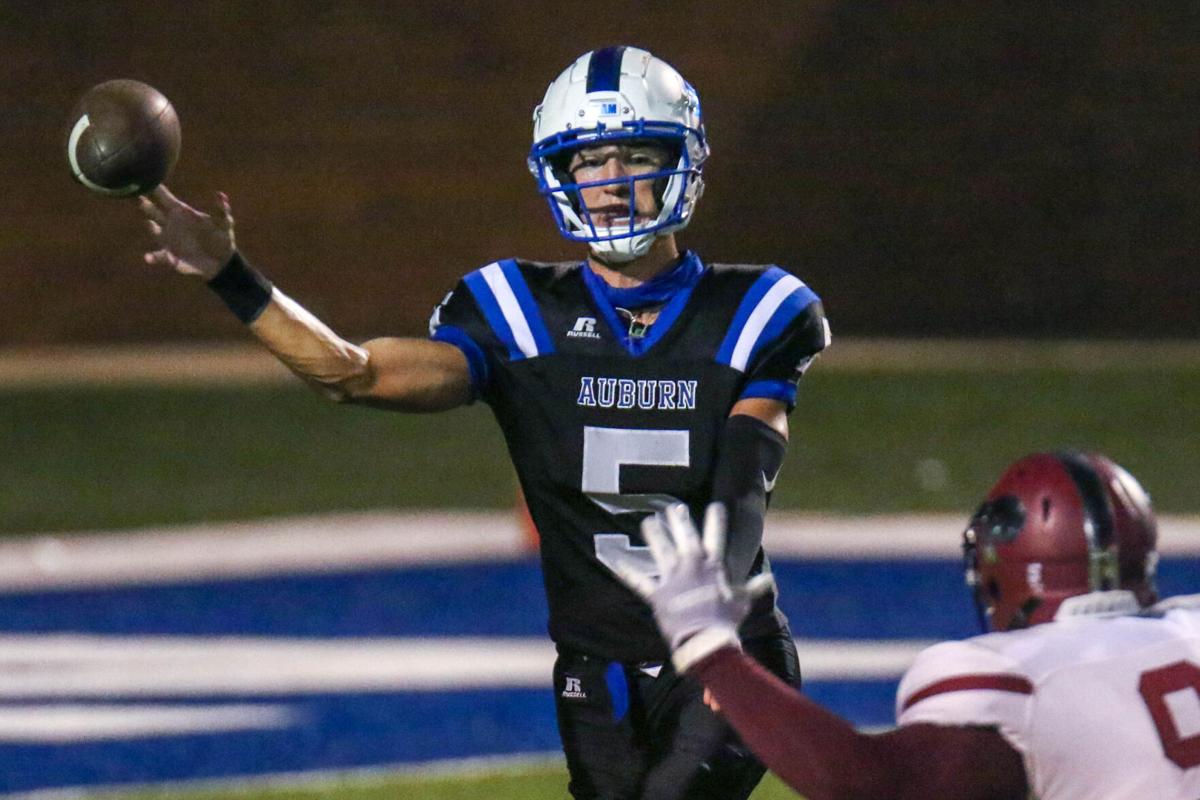 Auburn High's Matthew Caldwell (5) throws a pass during the team's game against Prattville on Friday at Duck Samford Stadium.

In a game in which any offensive yards were hard to come by, Auburn High linebacker Burnard Thomas made the most of the moment to help the Tigers take care of region foe Prattville on Friday.

Thomas picked up a loose ball courtesy a bad snap on a punt and scored on a four-yard return to deliver the spark Auburn needed in a 22-0 victory over the Lions. The win was highlighted by yet another dominant defensive showing from Auburn, which held Prattville to 119 yards of offense and left the Lions with a shutout loss.

The win gives Auburn a seven-game winning streak against Prattville, its longest in a series that dates back to 1934.

“We were in a rush call. When I ran and got there, I saw the ball had slipped out. It was a missed snap or something. The punter lost sight of it,” Thomas said. “I just saw the ball and got after it. It was good pursuit. I thank my other teammates because any of us could have got there first. We all got there, we all executed and we all got in the end zone and celebrated.”

Auburn (3-0, 1-0) looked destined to leave the field at the break before Thomas saw his opportunity and took advantage.

The Tigers held a 3-0 lead with nearly 30 seconds left in the second quarter when Prattville’s long snapper bounced the ball toward punter James Rogers, who tried in vain to recover it. One Auburn player unsuccessfully tried to scoop the ball, sending it bouncing toward the sideline and on a hop to Thomas.

Thomas grabbed the ball and stumbled across the goal line for a touchdown, the lone one on either side in the first half.

“I think it's really important. Coach Winegarden tells us that you win the game three ways: offense, defense and special teams. I think that's a vital part,” Thomas said. “When defenses are in a battle and it's a goose egg on the scoreboard, you just rely on special teams and rely on the offense to make a play.”

“It was huge,” Auburn head coach Adam Winegarden said of Thomas’ score. “Anytime you go into halftime up by two scores, that was a huge momentum booster for us before the half.”

Auburn’s only other points in the first half were also due to a misstep by the Lions.

Prattville’s opening drive of the evening lasted all of two plays, as the Lions’ running back fumbled and the Tigers recovered on the Prattville 23-yard line. The Auburn offense couldn’t get much going after the turnover and instead sent out kicker Josh Owsley, who drilled a 41-yard field goal to give Auburn an early 3-0 advantage.

The disappointing drive in good field position was a sign of what was to come in the first half for Auburn, which only racked up 54 offensive yards through two quarters. The good news was the Tigers’ defense was simply unrelenting.

The Tigers held back the Lions’ offense again and again, and outside a 45-yard bomb in the second quarter Prattville only mustered 38 yards of offense and punted to end three of six drives. The 10-point cushion was more than enough for the Auburn defense, which was determined to keep up its stellar play all night long.

Prattville (2-1, 0-1) failed to break through as the minutes ticked away, and Auburn finally delivered the knock-out punch in the opening minutes of the fourth quarter.

Ater another stalled-out drive that featured two Auburn sacks and the Lions’ seventh punt of the game gave the Tigers possession on the Prattville 37, JT Rogers was dead set on securing the victory. He took his 15th carry of the night and burst through the middle for a 36-yard gain.

Amaury Hutchinson finished the drive off promptly with a one-yard touchdown on the next play to leave the Lions in a 20-0 hole.

The Tigers’ defense provided one final highlight with five minutes to go, as the Lions were hit with an intentional-grounding penalty in the end zone for an Auburn safety. The defensive pair of points marked the third straight game the Tigers have recorded a safety.

Auburn returns to region play Friday when it travels to Dothan, while Prattville follows with a region game at Smiths Station. Friday’s game could very well have major implications in the region’s final standings, and Winegarden was certainly thrilled to have his team on the winning side once again.

“It was huge. Prattville has always been a battle for us and always had huge playoff implications. To start off (region play) with a win was fantastic,” Winegarden said.

Updates on local alums from Auburn High, Dadeville, Glenwood and Opelika, including UAB safety Will Boler.

On a night when LaFayette sold out to stop the Dadeville rushing attack, Tigers quarterback Lane Smith made several huge plays to power Dadeville to a 18-7 victory.

Auburn High's Burnard Thomas (10) celebrates the tide-turning touchdown with his teammates during Auburn High's win over Prattville on Friday at Duck Samford Stadium.

Auburn High's Matthew Caldwell (5) throws a pass during the team's game against Prattville on Friday at Duck Samford Stadium.