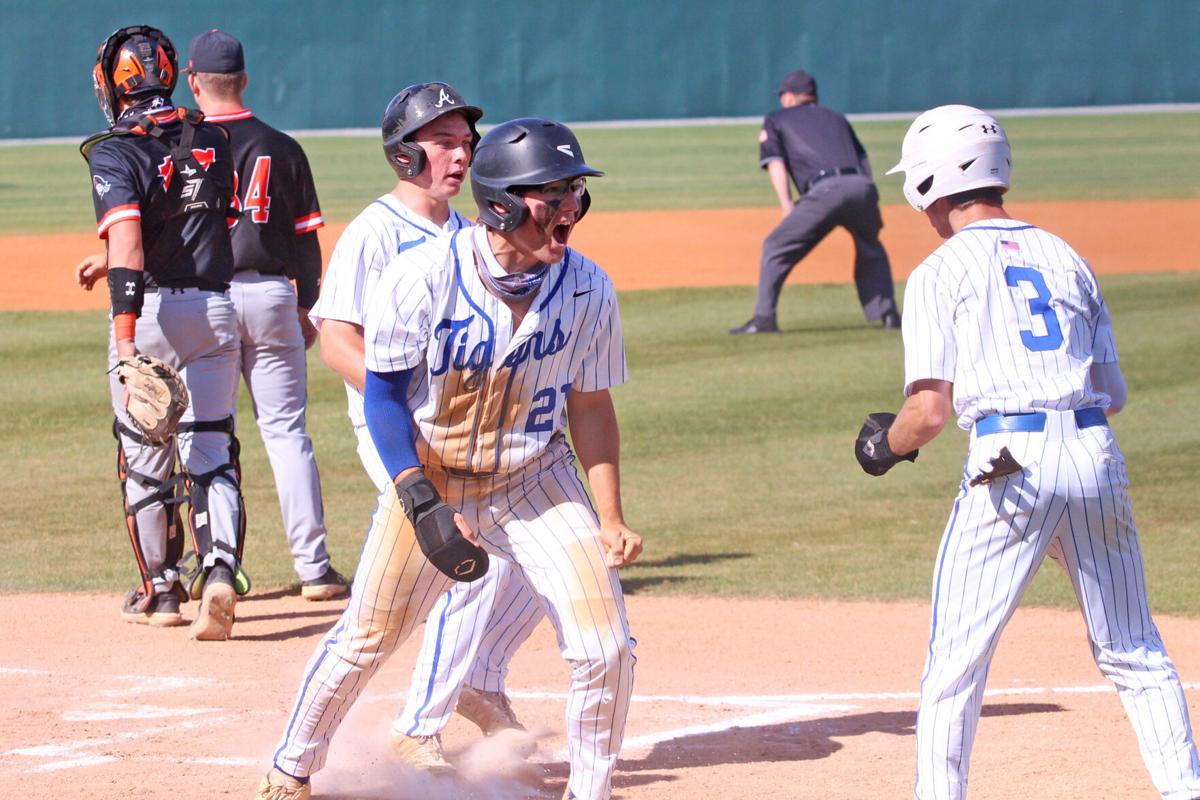 Auburn High’s Todd Clay (21) celebrates after scoring a run during Will Turner’s three-RBI double in Game 1 of the AHSAA Class 7A state championship series aginst Hoover on Wednesday at Paterson Field in Montgomery. 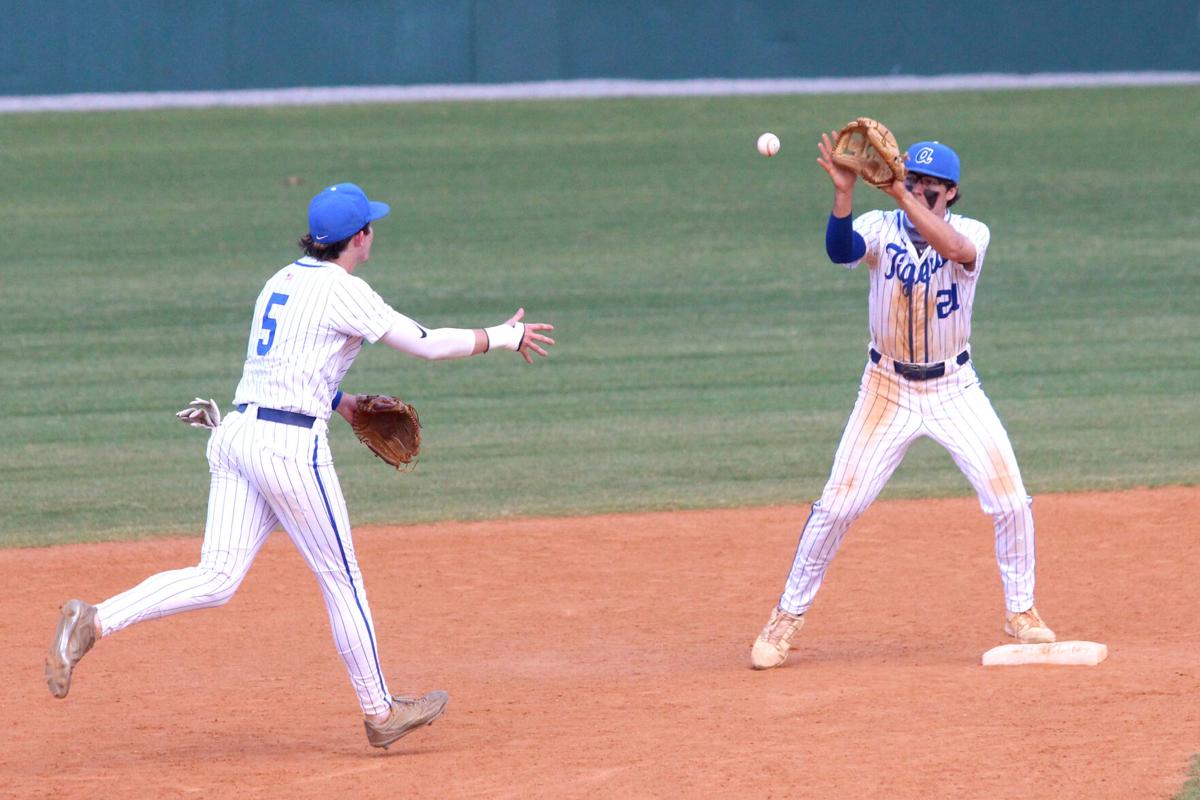 Auburn High's Webb Veronese flips the ball to Todd Clay for an out in Game 1 of the AHSAA Class 7A state championship series aginst Hoover on Wednesday at Paterson Field in Montgomery. 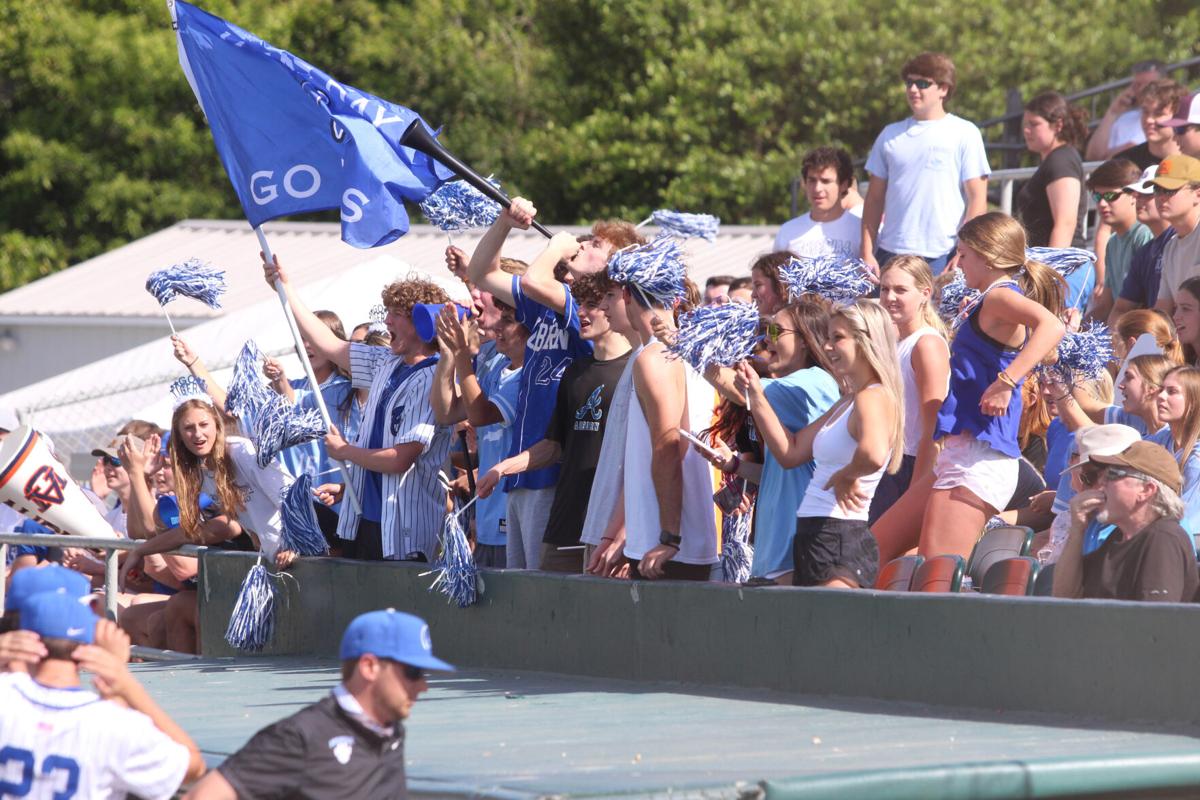 Auburn High fans make some noise during Game 1 of the AHSAA Class 7A state championship series aginst Hoover on Wednesday at Paterson Field in Montgomery.

MONTGOMERY – With a chance to grab the ever-pivotal Game 1 of the Class 7A championship series, the Auburn High Tigers delivered again and again Wednesday.

Auburn showed no hesitation at the plate against Hoover to open the championship series, as the Tigers racked up seven hits and plated seven runs through the first three innings en route to a 9-2 victory.

The win to open the best-of-three series could prove pivotal for Auburn (35-6), which can capture the fifth state title in program history if it beats the Buccaneers in Game 2 at 10 a.m. in Montgomery’s Riverwalk Stadium. A Game 3 would follow if necessary.

“I think the big hit by Will Turner [in the second inning] got us going there. I think in the first inning we turned a double play, and I think that was a big momentum gain, too,” Auburn coach Matt Cimo said. “I think there’s some little things in there that got us going. We just kind of kept putting more pressure on them and kept getting some runs.

“We did some little things right and took advantage of some big hits and big situations, which got us going.”

The Tigers jumped out to a 3-0 lead in the second inning by loading the bases for Turner, who promptly unloaded them with a three-RBI double to left field. The Buccaneers (26-21) answered with two runs in the top of the third on an RBI groundout and an RBI double to create a 3-2 contest entering the third.

Auburn gave itself much more breathing room come the fourth.

Right fielder Connor Crosby got things started with an RBI double to right field before left fielder Judson Waters laid down a sacrifice bunt on a suicide squeeze to hand the Tigers a 5-2 lead. Auburn loaded the bases again – this time for designated hitter Henry Allen, whose single to right field scored two runners and left Hoover in a 7-2 hole.

Cosby wasn’t done, either. He tacked on an RBI single to right field in the sixth as part of a two-run inning that also saw Waters bring a run across on a fielder’s choice.

“I was focused at the plate and I was ready to go,” said Cosby, who was 2-for-3 with two RBIs. “Without this team, I wouldn’t be here. This team has a lot of energy, and that’s why I love it so much.”

As for the rest of the Auburn lineup, Turner was 1-for-4 with three RBIs. Right fielder Riley Austin was the only other Auburn player with multiple hits and ended the day 2-for-3.

Auburn’s repeated outbursts at the plate were a welcomed sight for Tigers starting pitcher Brady Fuller.

Fuller handled himself well as the Tigers’ Game 1 starter, and outside a two-run third inning the senior kept the Buccaneers at bay time after time. He left the game having thrown five innings with two runs allowed on three hits and five walks to go with six strikeouts on 98 pitches.

“It’s something I’ve always wanted to do. My brother [Brooks] came here three years in a row. Just watching that, I wanted to come and do it, too,” Fuller said. “Going in Game 1, I know everybody says it’s a lot of pressure, but we were supposed to just come out and be our team, be ourselves and just go out there and compete every pitch and every inning.”

Fuller was relieved by Caleb Sanders, who threw one inning with no base runners allowed. Sanders then gave way to Tanner Phillips, who gave up two hits before closing the book on the Buccaneers with no harm done.

Auburn is now one win away from its second state championship in the last three seasons. For Cosby, Wednesday’s win was worth celebrating while understanding the Tigers have more work ahead.

“[The message is] just be focused and just know the job’s not done yet,” Cosby said. “We have to win tomorrow – one game.”

PHOTOS: Auburn High baseball vs. Hoover in the Class 7A state championship series

Several local athletes and one coach have received recognition after yet another productive spring season of baseball.

Auburn High’s Todd Clay (21) celebrates after scoring a run during Will Turner’s three-RBI double in Game 1 of the AHSAA Class 7A state championship series aginst Hoover on Wednesday at Paterson Field in Montgomery.

Auburn High's Webb Veronese flips the ball to Todd Clay for an out in Game 1 of the AHSAA Class 7A state championship series aginst Hoover on Wednesday at Paterson Field in Montgomery.

Auburn High fans make some noise during Game 1 of the AHSAA Class 7A state championship series aginst Hoover on Wednesday at Paterson Field in Montgomery.