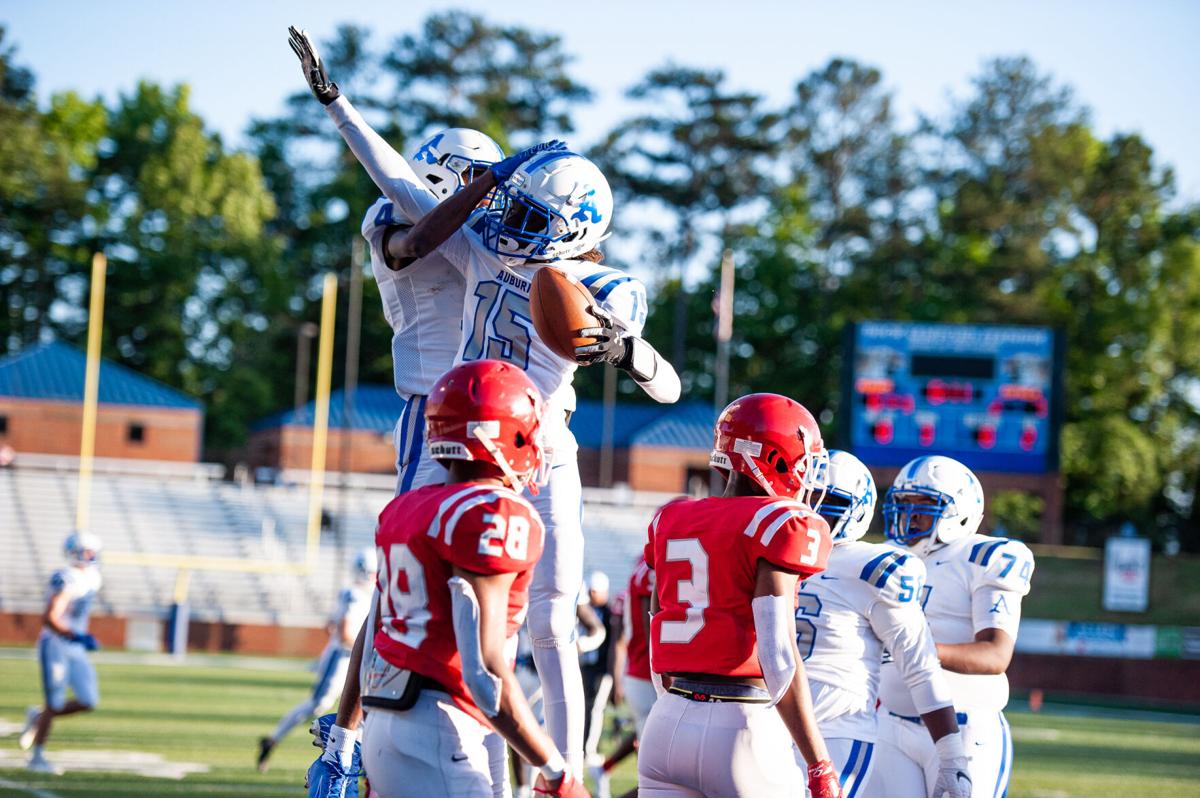 Auburn High wide receiver Marcellus Josephson (15) celebrates after a touchdown catch in the first half of the Tigers’ spring game against Eufaula on Thursday in Auburn. 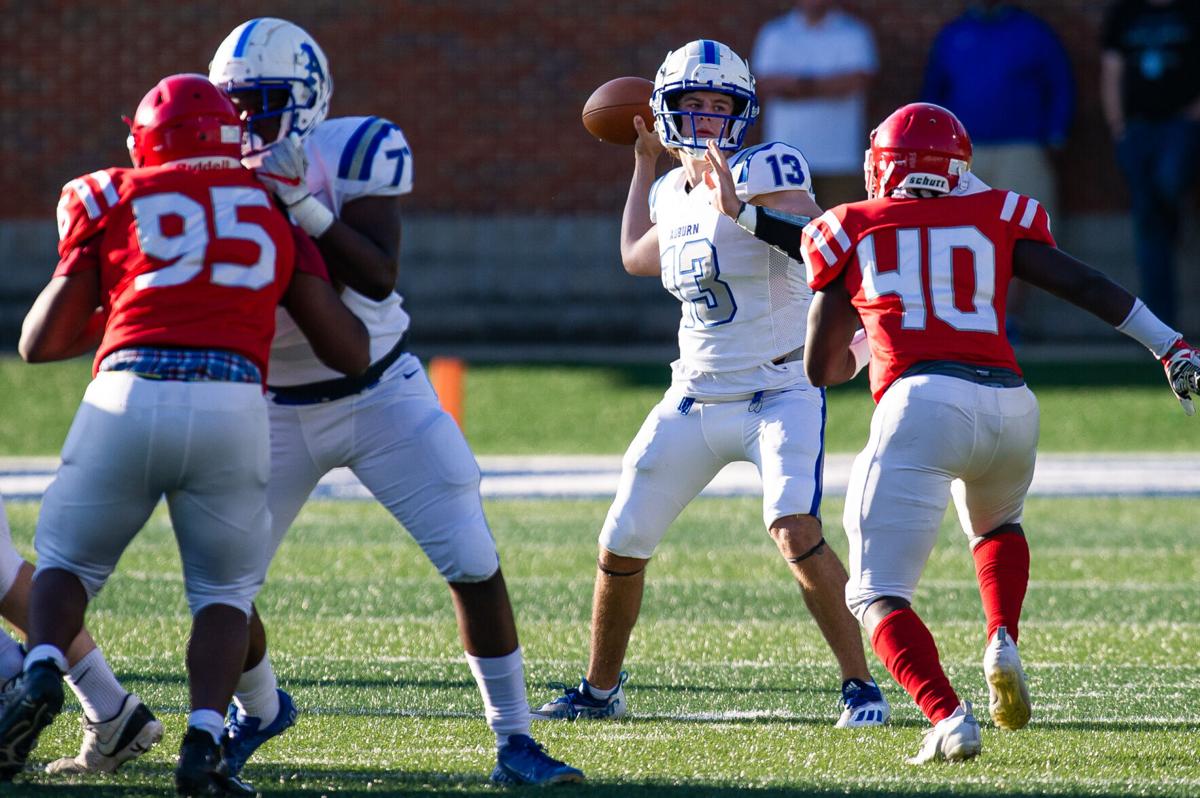 Auburn quarterback Clyde Pittman (13) throws a pass in the first half. Auburn vs Eufaula on Thursday, May 13 in Auburn, Ala. 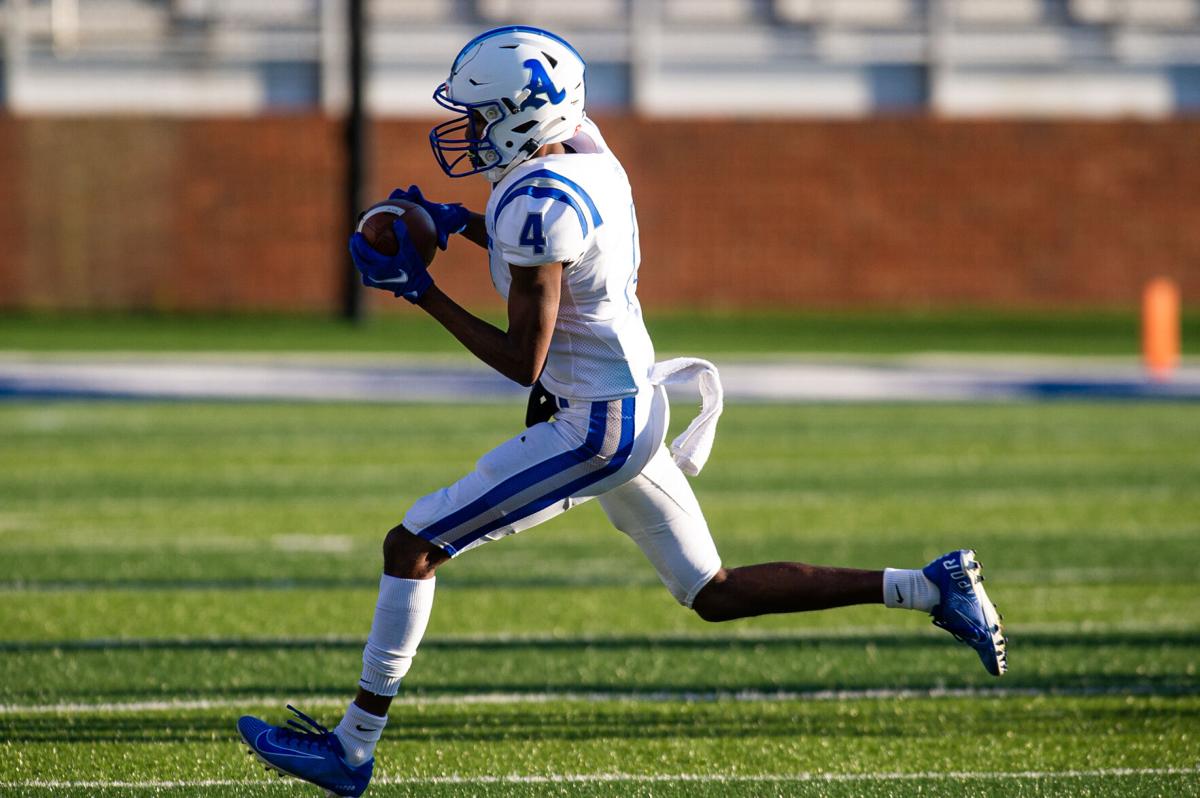 Auburn's VJ Levett (4) catches a pass in the first half. Auburn vs Eufaula on Thursday, May 13 in Auburn, Ala.

The Auburn High football team finished off its first spring practice under head coach Keith Etheredge with a performance that will generate plenty of excitement in the lead-up to the 2021 season.

Auburn closed the spring with a 35-14 victory over Eufaula on Thursday night. The win featured a solid outing by junior quarterback Clyde Pittman, who completed 14 passes for 137 yards and three touchdowns, and a stellar effort from a Tigers' defense that looks poised to once again be one of the state's best.

"I thought we played good in spots. We started out a little slow. [Eufaula] made a couple plays," Etheredge said. "We came back and made some plays in the second half and got a lead. I think they've got some good players. We were just trying to find a way to play 168 of these guys. But I'm proud of our guys. I think our guys fought and scrapped hard. I saw some real good things and have got some things we need to work on. I'm excited."

Neither side found the end zone until the scrimmage's second quarter, when Eufaula running back Jamarian Lewis' one-yard touchdown run made it a 7-0 contest with 10:10 to go until halftime. Auburn answered right back with a 12-play drive that ended when Pittman fired to receiver Marcellous Josephson, who went up and made a difficult catch for an eight-yard touchdown with 6:11 left in the quarter.

Eufaula went into the break with a 14-7 lead thanks to quarterback Copeland Cotton's four-yard touchdown run with just seconds left in the first half.

From there, the scrimmage belonged to Auburn.

The home Tigers tied things up at 14 when running back Jamarious Woods broke loose down the left sideline on a 19-yard touchdown run with 8:55 to go in the third. The Auburn defense forced a Eufaula punt before Pittman connected with tight end Camden Etheredge on an eight-yard touchdown pass to hand Auburn a 21-14 lead with 5:41 to go until the fourth.

Auburn pushed its lead to two touchdowns when wide receiver VJ Levett hauled in a 25-yard touchdown reception nearly two minutes after Etheredge's score. The home Tigers tacked on one final touchdown when Tyler Flakes caught a touchdown from Ryan Dearing in the game's closing minutes.

Given how much Etheredge has tried to learn in his first spring at Auburn, the first-year head coach explained playing a quality opponent like Eufaula was incredibly valuable for what he and his new staff aim to accomplish.

Etheredge praised the play of senior linebackers Powell Gordon and Jimmy Vickerstaff in their limited action Thursday. The Tigers head coach said he is hoping for a more consistent push on the defensive line going forward, but he was pleased with how the players on the edge handled the moment.

As for the offense, Etheredge pointed out Auburn was breaking in eight new starters and that the Tigers started clicking on that side after the second drive. He complimented Pittman and Camden Etheredge, his son, and also said the offensive line blocked well at times.

Thursday's spring game marked the close of some important weeks of work for Etheredge's new team. While the victory made for an enjoyable night in Duck Samford Stadium, Etheredge understood there's plenty left to be done.

"I just want to see them get better and come together as a team. We've got to do this together," Etheredge said. "I'm excited about this group. They're a great group of guys."

Several local athletes and one coach have received recognition after yet another productive spring season of baseball.

Auburn High wide receiver Marcellus Josephson (15) celebrates after a touchdown catch in the first half of the Tigers’ spring game against Eufaula on Thursday in Auburn.

Auburn quarterback Clyde Pittman (13) throws a pass in the first half. Auburn vs Eufaula on Thursday, May 13 in Auburn, Ala.

Auburn's VJ Levett (4) catches a pass in the first half. Auburn vs Eufaula on Thursday, May 13 in Auburn, Ala.