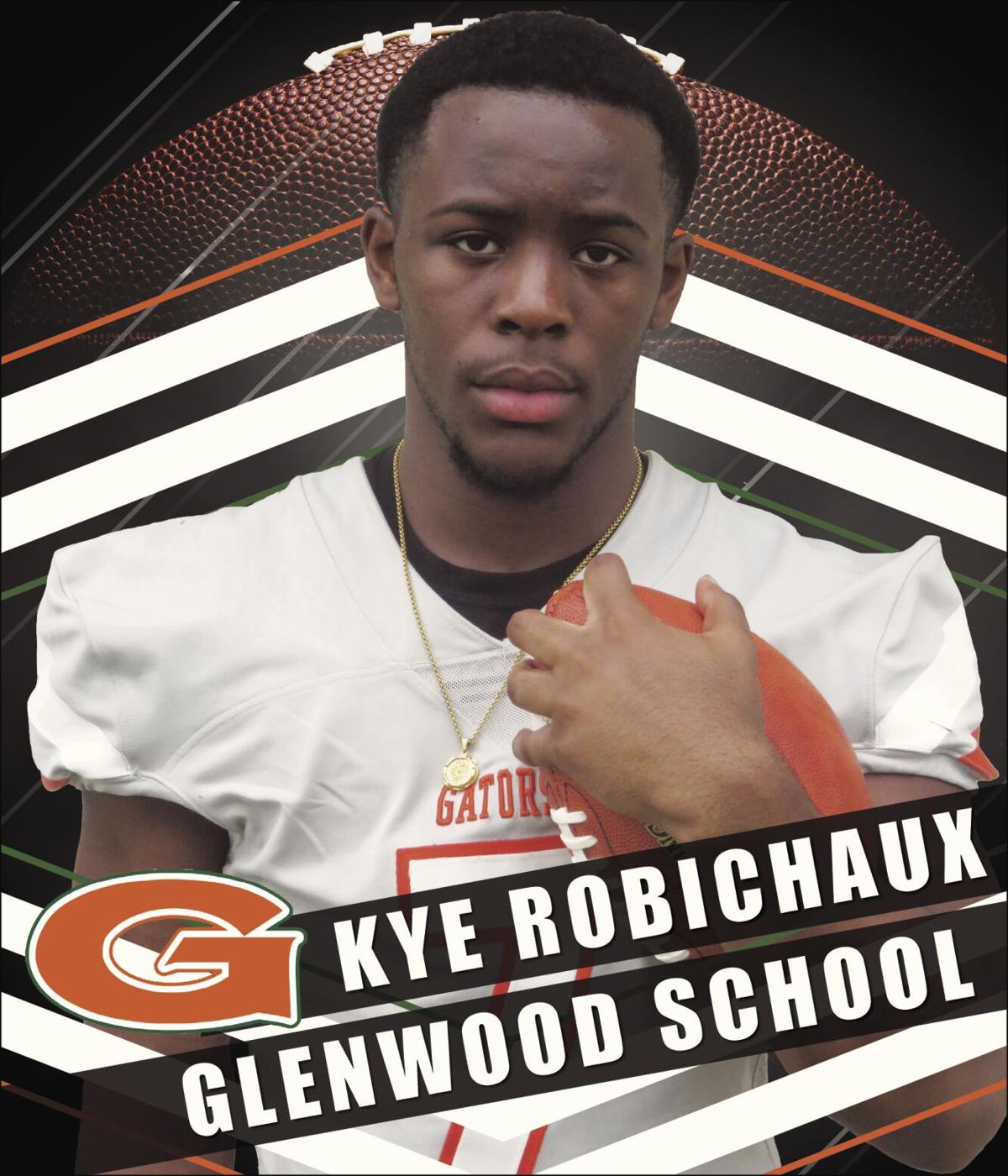 Glenwood running back Kye Robichaux ripped through defenses again and again as a junior in 2019 and expects that pattern to continue in 2020. 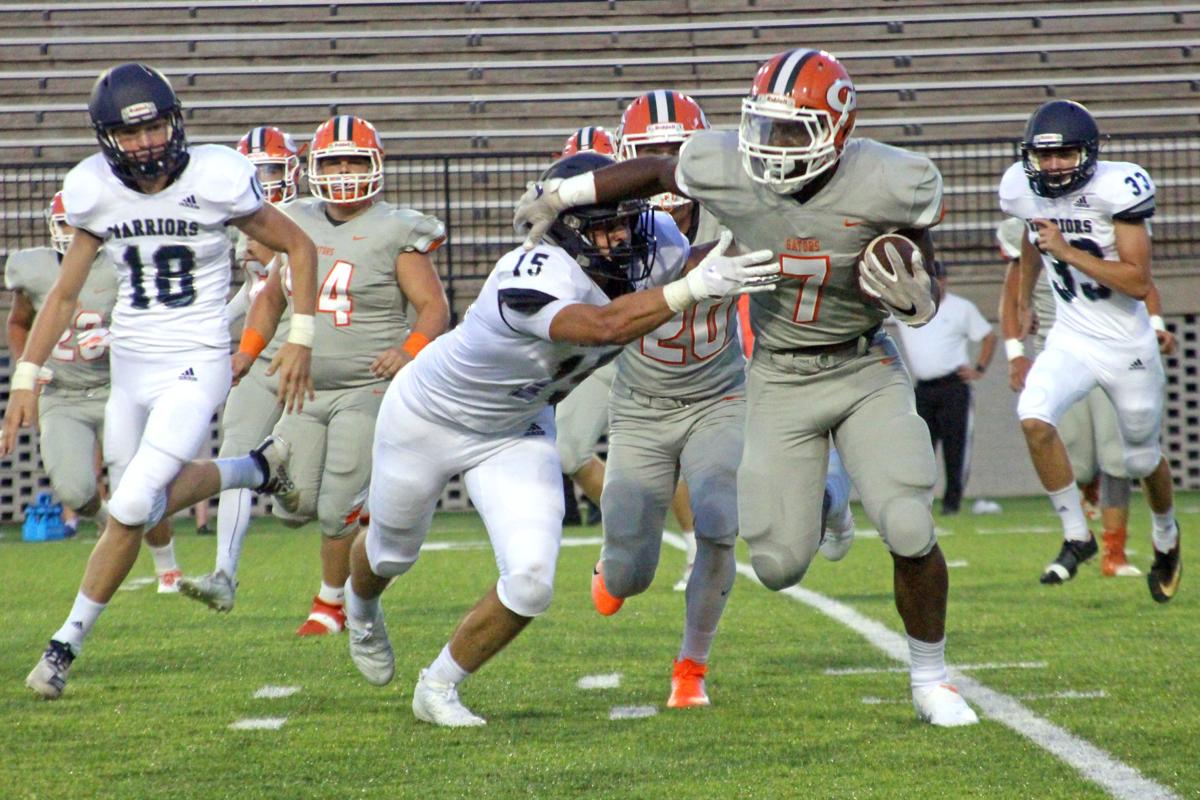 Glenwood's Kye Robichaux breaks tackles during the Gators' game on Aug. 17, 2019 at Cramton Bowl in Montgomery against Brookwood School of Thomasville, Ga.

EDITOR’S NOTE: Leading up to the start of the high school football season, the Opelika-Auburn News will run features on this year’s Super 8 Seniors. Today: Glenwood School running back Kye Robichaux.

Despite dealing with a lingering injury in 2019, Glenwood running back Kye Robichaux took off almost as soon as he joined his new team. With a year as a Gator now under his belt and his health back better than ever, Robichaux is eager to be in the fight for the right to be called the AISA’s best back.

Robichaux seemed hardly even hampered by his hamstring issues in his first year at Glenwood after transferring from St. Anne Pacelli in Columbus, as the 6-foot-2, 195-pound bruiser bullied his way to a 1,335-yard, 15-touchdown season. Now, the future is brighter than ever, and Robichaux is doing everything he can to make the most of it.

“It’s been a lot different since last year. I dropped some weight, got a little bit faster, got a little bit more mobile,” Robichaux said. “Team-wise it’s different because we got the whole pandemic. We’ve got to approach things in a different manner, but we’re trying to do everything within the guidelines but get work in at the same time.”

Robichaux arrived at Glenwood as an unproven tailback who was anxious to show what he could do. According to Gators head coach Jason Gibson, by about the first day his new star had already succeeded.

Robichaux certainly showed as much by the team’s first game, a showdown with Brookwood on Aug. 17 in Montgomery. The running back ripped through the Warriors’ defense from the jump, and by the night’s end he had 11 carries for 107 yards along with one rushing and one receiving touchdown in the Gators' 51-0 victory.

Gibson explained that the moment was a pivotal one for Robichaux, as it showed the Gators that their newest teammate was not only a true contributor but a real difference-maker. As Robichaux quickly proved as the season went along, that performance was just the start of something bigger.

Robichaux kept things rolling the next week in a weather-shortened game against Monroe Academy, as he still managed to rack up 130 yards and three touchdowns in a showdown that only lasted three quarters. Robichaux’s breakout games coincided with a true rise for the Gators, who at one point ascended to the No. 1 ranking among the AISA’s three classifications.

Gibson, who coaches the Columbus Lions of the National Arena League, is known for throwing the ball around the field with his other squad. That being said, it didn’t take him long to realize the key to winning with the Gators was feeding No. 7 early and often.

“Kye has an innate ability to see the hole. You can’t teach that. There’s nothing that he does that I’ve taught. I’m not taking credit for it. Some guys just know how to see the hole,” Gibson said. “He carried us through the season. There were big plays throughout the season that showed he’s our go-to guy.”

Robichaux’s play was crucial in pushing the Gators’ to the Class AAA championship game for a face-off with Bessemer Academy. The night, however, did not go well for the running back or the rest of the team, as Robichaux was limited to just 49 yards and the Gators fell 49-22.

As painful as the loss was for Robichaux, it provided a spark that has carried him throughout this offseason.

Robichaux has been working diligently on getting in better shape, saying that he’s dropped about 15 pounds this offseason thanks in part to work with his trainer that at times included at least four daily workouts. Robichaux’s work has garnered the interest of several college coaches, as schools such as Purdue, Middle Tennessee State, Troy, Tulane and Alabama State have been in touch with the tailback.

Robichaux’s intent is to help the Gators break through in a big way this season, and Gibson believes he has the ability to be a 2,000-yard back. Robichaux said the motto for 2020 is ‘Finish’, a reminder of how the team got to the big game last year and couldn’t pull off a victory.

Robichaux and his teammates will be tested as soon as the opening game. Bessemer Academy comes to Glenwood on Aug. 21, and while he understands the game does not make or break the Gators’ entire campaign, he is eager to show the Rebels that they’re dealing with a different Kye Robichaux this year.

“I’m too excited. I love how it’s set up too, because the first game will tell everything,” Robichaux said. “We’ll see where we’re at against who we lost to at state, so that’s just gonna show everything. We’ve gotta come out there with an attitude and aggressiveness and get after it.

“I love the chance (at getting revenge.)”

While most people found themselves bored during quarantine this spring and summer, Auburn High center Cort Bradley couldn’t slow down.

Glenwood running back Kye Robichaux ripped through defenses again and again as a junior in 2019 and expects that pattern to continue in 2020.

Glenwood's Kye Robichaux breaks tackles during the Gators' game on Aug. 17, 2019 at Cramton Bowl in Montgomery against Brookwood School of Thomasville, Ga.