'Something to build on': Auburn can't keep up in loss to No. 1 Gonzaga 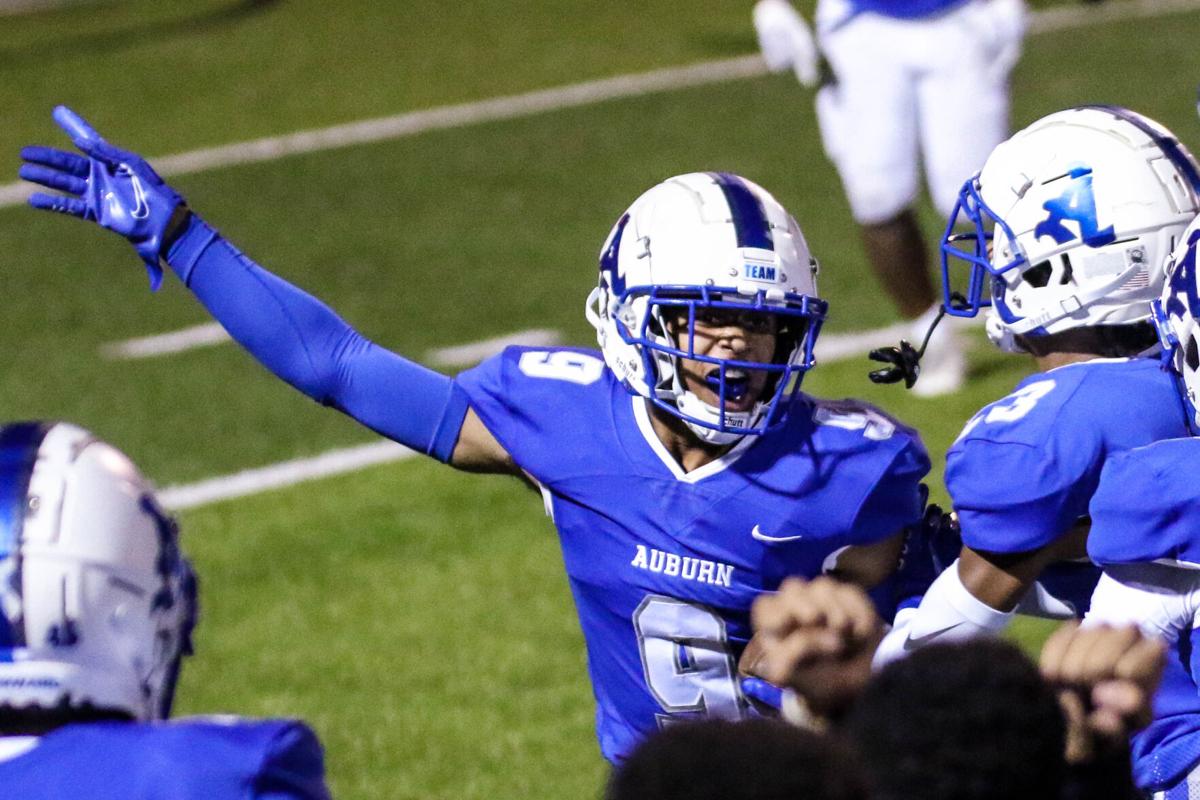 Auburn High's Noah Warren (9) celebrates his interception during the team's win over Daphne on Friday in Duck Samford Stadium. 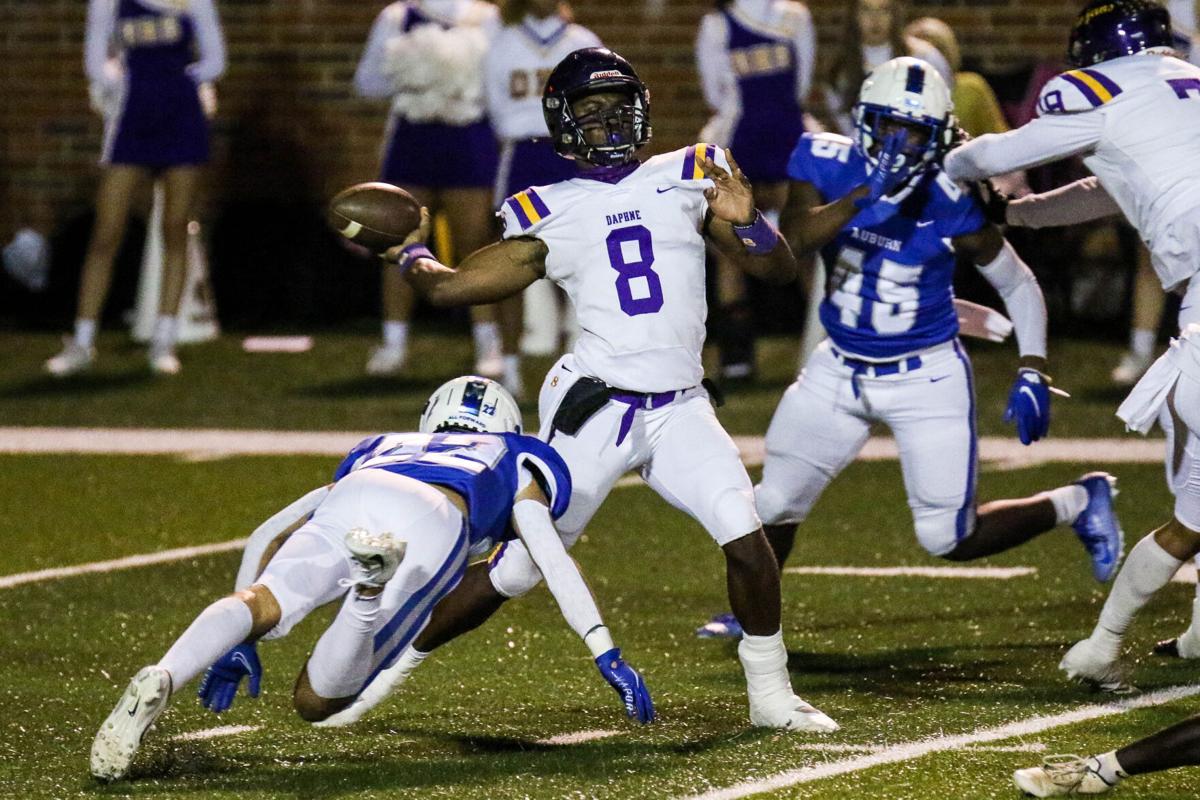 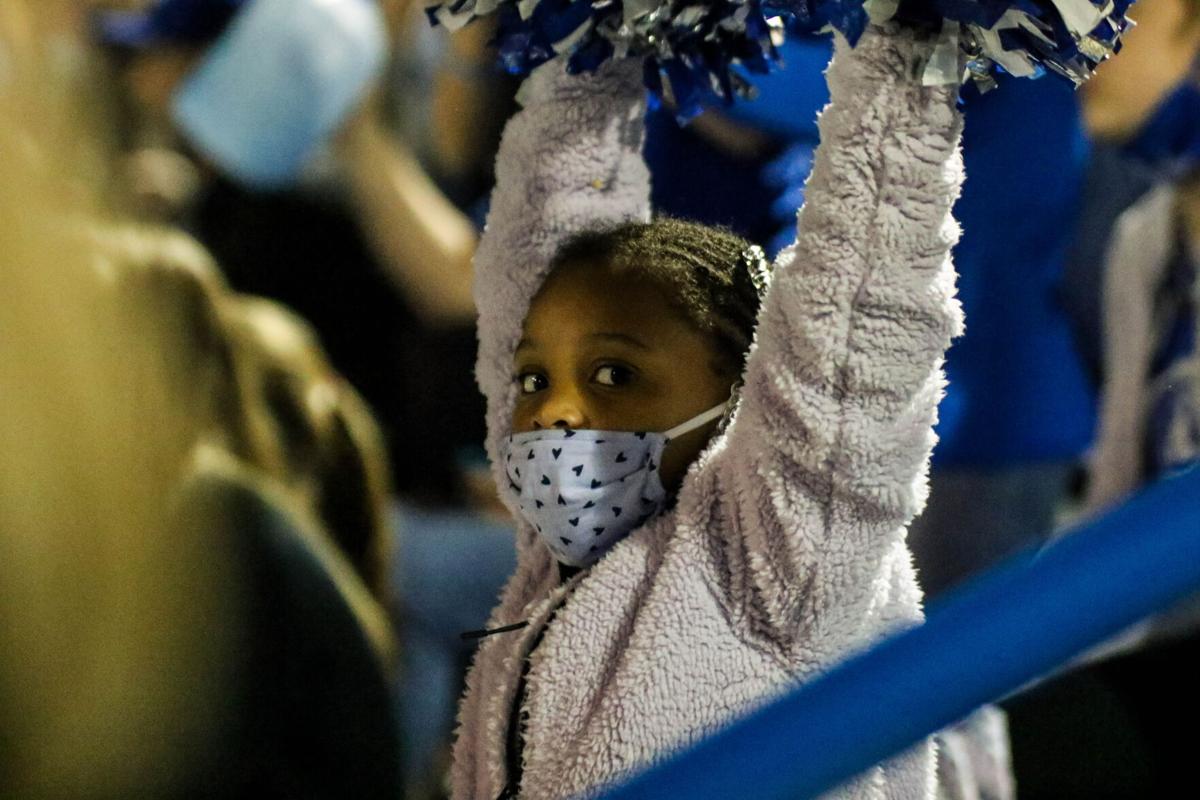 An Auburn High fan cheers during the team's game against Daphne on Friday at Duck Samford Stadium.

As dominant as the Auburn High defense was throughout Friday’s state quarterfinals game against Daphne, it was apparent early in the fourth quarter the Tigers needed one big play to separate themselves from the Trojans.

With 8:07 left in the contest, Auburn High defensive back Noah Warren stood up and delivered it.

Warren recognized a pass was coming his way, tipped the ball and made a diving interception to give Auburn the ball back and set up the Tigers’ second and final scoring drive in a 13-7 victory on Friday night in Duck Samford Stadium. Warren’s play was the ultimate highlight on a night that included several big plays by the defense, which held the Trojans to 46 offensive yards and seven points while sacking Daphne quarterback Trent Battle seven times.

Thanks to Warren and his teammates’ performance, the Tigers are headed to the Class 7A semifinals for the second straight year.

“I was back there, and I seen the ball and I seen where the dude broke. When he broke, I broke. I seen the ball just in the air, and it made me just go get it,” Warren said. “Oh, [making the play] meant a lot. We just want to go forward to the next round and keep going up for our teammates.”

Auburn (11-1, 5-1) had seen several scoring opportunities fail to end in points as the game reached the fourth, but the unrelenting defense made sure that Amaury Hutchinson’s four-yard run just before halftime would be enough to keep the Tigers in good standing. The Tigers repeatedly got after Battle throughout the night, leading to the point in which a poor throw was all Warren needed to steal the show.

After another promising Tigers’ drive ended with a turnover on downs at the Daphne 36-yard line, the Tigers swarmed Battle on first down for a five-yard sack before the Trojans drew a personal foul to move the ball back to their own 15-yard line. Daphne (10-2, 7-1), which to that point only had 24 yards of offense, needed to get something going and in a hurry, but the third-down throw went right to Warren, who batted the ball for what looked sure to be an incompletion to set up a punt.

Only Warren didn’t give up on the ball. He quickly left his feet and made a diving catch, leaving the Tigers 31 yards from the end zone.

Auburn High head coach Adam Winegarden had seen plenty of things worth celebrating from his defense against Daphne, but Warren’s focused play likely took the cake.

“Man, that was a SportsCenter play,” Winegarden said. “He's super athletic. That was just an incredible break and then concentration to make the catch.”

The Auburn offense had missed out on points early in the game, but after Warren’s play the Tigers were ready to finish the drive with points.

The ensuing possession had a rocky start after quarterback Matthew Caldwell’s 29-yard touchdown pass to Bryson Clague was taken off the board due to a penalty, but Caldwell came back two plays later and hit Zae Ray on a 27-yard pass to the Daphne one-yard line. Caldwell, who lost a fumble on the Tigers’ opening possession, made up for his early miscue by diving forward for a one-yard touchdown run that gave Auburn a 13-0 lead with 6:20 to go in the game.

Auburn had scored its first touchdown of the game on a drive mired by Daphne penalties. As it turned out, the Trojans answered with one incredibly similar.

Needing answers in a hurry, the Trojans looked to make plays but truly kept their next drive alive with four crucial penalties on Auburn. Battle finally struck paydirt with 2:52 to go in the game, scoring on a three-yard run to cut the Tigers’ lead down to six points.

After the Auburn defense excelled throughout the night, it was up to the offense to finish the job. Luckily for the Tigers, their offense was up for the task.

The Tigers recovered Daphne’s onside kick then went to work on the clock, with JT Rogers and Amaury Hutchinson doing the brunt of the work. Hutchinson finished the drill for the Tigers, breaking off an 11-yard run and a seven-yard run before the Trojans were hit with their 17th penalty of the night.

The final flag was also the last straw, as it allowed Caldwell to kneel out the clock and prepare for another meeting with Central-Phenix City for a spot in the state title game.

The incredible defensive effort was not lost on Winegarden, who knew it would be a tall task to slow down the Trojans’ explosive offense. Despite the challenge, the Tigers wasted little time in showing they were ready to get the job done.

“That was probably the best defensive performance I've seen in a long time as a high school coach. We put a lot of pressure on the quarterback,” Winegarden said. “We felt like that was going to be our best defense -- was keeping them from trying to get those big chunk balls. I thought we defended them well, too.”

The intense final minutes of action followed a first half in which it seemed Auburn was just one or two plays away from cruising to another one-sided victory.

The Tigers had missed out on a few prime chances for points earlier in the game, but that situation changed with just under six minutes to go until halftime.

Backed up on their own five-yard line, the Tigers began pounding the ball and took full advantage of a costly facemask penalty followed four plays later by a defensive pass interference call to swiftly cross midfield. Auburn soon reached the Daphne 13-yard line before Rusty McKinnell broke an eight-yard run down toward the goal line.

From there, the tides turned in the Tigers’ favor.

A mismanaged third-down run by Auburn was erased by an unsportsmanlike penalty on the Trojans, which set up a fourth-and-short on the Daphne 4. The Tigers got hit with a false start, sent the field-goal unit out then tried to run a fake that ended with a pass falling harmlessly in the end zone.

A yellow flag lay close by, the product of an apparent defensive pass interference for the Trojans’ sixth penalty of the drive.

On the next play, Hutchinson pushed his way through for a four-yard rushing touchdown to put the Tigers on top 7-0 with 2:23 to go until the intermission.

The Tigers appeared able to move the ball well on Daphne early; the only issue was turning those promising possessions into points.

Auburn opened the action with an impressive drive, stringing together 10 plays that covered 51 yards and included three third-down conversions. That drive, however, ended prematurely, as the Tigers fumbled and the Trojans recovered on their own 24.

Following a dominant three-and-out that featured two sacks, the Tigers were handed excellent field position thanks to a Daphne penalty for kick-catch interference. Auburn needed only 14 yards to find the end zone but were unable to do so and only gained five yards on the drive.

To make matters worse, the normally-reliable Auburn special teams had a rare mistake. The Tigers’ 26-yard field goal was a line drive that did not clear the crossbar, leaving the game scoreless with 3:32 remaining in the first quarter.

Despite those issues, the Tigers’ defense held firm. Auburn allowed only 14 yards of offense in the first half, with the Trojans’ most promising possession of the first two quarters — a seven-play, 23-yard drive — ending in a turnover on downs at midfield.

While the game was truly up for grabs late, the Tigers’ defense never wavered. Now, Warren and his teammates turn their attention back to the Red Devils knowing that a second win over Central sends the Tigers to the state title game.

Auburn High's Noah Warren (9) celebrates his interception during the team's win over Daphne on Friday in Duck Samford Stadium.

An Auburn High fan cheers during the team's game against Daphne on Friday at Duck Samford Stadium.