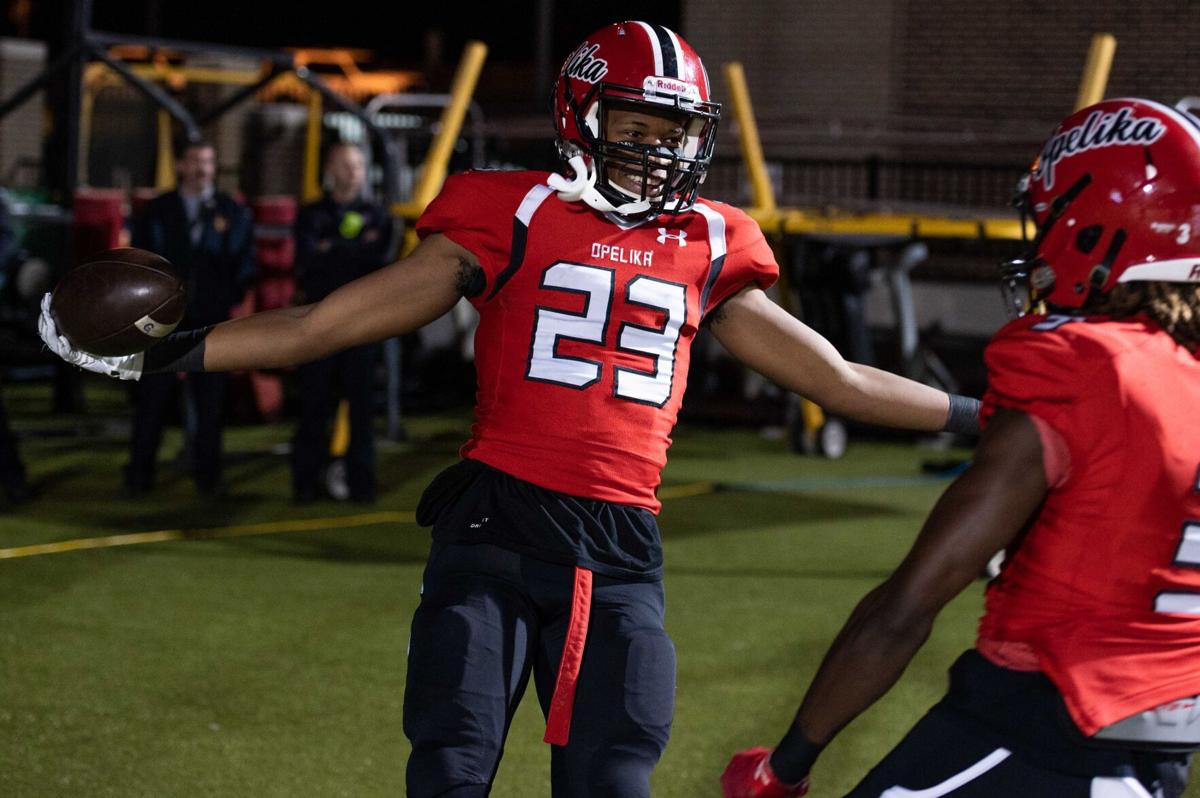 Opelika’s Kaden Cooper (23) celebrates after his second touchdown carry of the night. Opelika vs Spanish Fort on Friday, November 12 in Opelika. 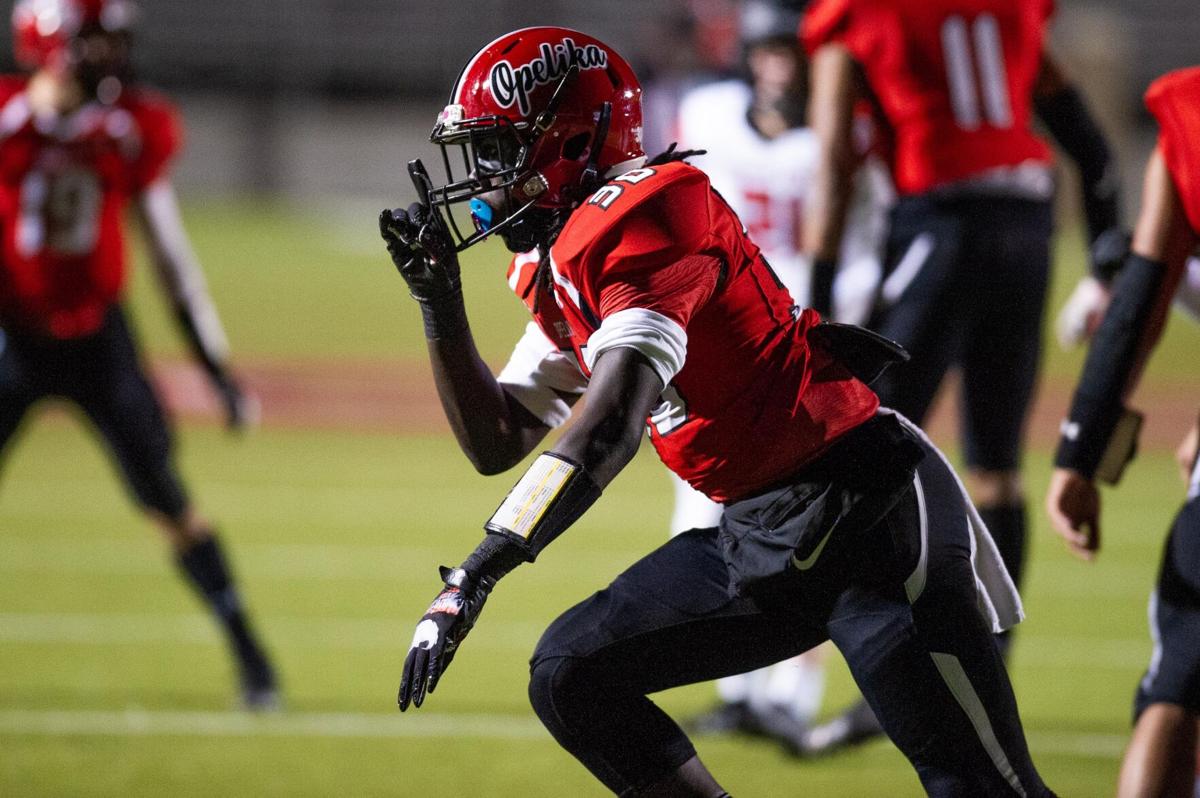 JORDAN D. HILL After making a critical error on the game’s opening drive Friday, Opelika made sure to regain its form and make the most of Spanish Fort’s missteps.

The Bulldogs bounced back quickly after throwing an early pick six and rode an excellent night on the ground and two Toros turnovers to a 28-14 victory in the Class 6A second round. Opelika’s victory means the Bulldogs are headed to the state semifinals, where they’ll play at Hueytown next Friday.

“We talk about in the playoffs to never blink,” Opelika head coach Erik Speakman said. “They’re a great team. We told [our players], ‘Bad things are going to happen, so let’s just hang in there.’”

Spanish Fort’s kick returners ran into each other trying to field the kick to start the third quarter, when sent the ball rolling aimlessly on the ground. Opelika’s Keldon Thompson came away with the ball on the Toros’ 11 to give his team an excellent shot at padding its lead.

To the Bulldogs’ credit, they wasted little time in making the Toros pay. On the drive’s third play, Jamori Thomas pushed forward on a 3-yard touchdown run to hand Opelika a 21-7 lead with 10:42 to go in the contest.

“We’ve been working hard all week, and we’ve been planning,” said Thomas, who had 23 carries for 173 yards and two touchdowns. “A lot of doubters have been talking, saying they’re going to lock us up and their defense is great. We came out here and worked, and we did what we had to do.”

Spanish Fort responded with its most impressive drive of the night. The Toros went 60 yards in 12 plays before Johnny Morris’ 1-yard run with two minutes left in the third cut Opelika’s lead back down to seven points.

Again, Thomas and his teammates went to work.

Thomas and fellow running back Kaden Cooper ran hard on Opelika’s next drive to gash a worn-out Toros defense as the Bulldogs marched downfield. Thomas again ended this drive with points, this time by scoring on a 1-yard carry with 11:12 remaining in the game.

The Toros’ final two drives of the contest featured a no-chance turnover on downs on fourth-and-19 followed by a Jarell Stinson interception on a must-have fourth-and-13.

The Opelika defense only gave up 192 yards and seven points in the victory.

A mistake put Opelika behind early in the action, but not for long.

The Bulldogs’ third play of the opening drive proved costly, as Spanish Fort defensive back Mario Montgomery saw the pass coming his way, jumped the intended receiver and took off for a 53-yard pick six.

Montgomery’s interception return left Opelika in an early 7-0 hole, but the Bulldogs looked none the worse for wear.

Opelika turned to its ground game after the interception and rode Thomas and Cooper all the way down the field.

Cooper faced a big situation on fourth-and-1 from the Spanish Fort 6-yard line, but the junior showed he was up for the moment. Cooper took the snap in the Wildcat formation, kept the ball and rumbled to the end zone with 6:41 to go in the first quarter.

The Opelika defense kept Spanish Fort’s offense at bay early on, which left the door open for the Bulldogs to surge ahead.

The Toros’ first offensive drive stalled out after five plays, and the Bulldogs took advantage. Opelika again relied on Thomas and Cooper to power the drive, and again Cooper finished it off in the end zone.

Cooper took a carry to his right, cut left into a hole formed by his lineman and was off to the races. Cooper’s 21-yard touchdown run gave Opelika a 14-7 lead with 2:45 to go in the opening quarter.

Cooper ended the night with 20 carries for 85 yards and two scores.

While both teams had their share of big plays, they also each headed into the break knowing they missed out of promising scoring opportunities.

Opelika threw a second interception — this one in the end zone — with 8:08 left in the second quarter. Seven minutes later, Spanish Fort put together its strongest drive to that point only to fumble the ball at midfield with only 35 seconds to go before the break.

The Bulldogs looked set to take advantage of the Toros’ first turnover, but that did not come to pass. Opelika called a run inside the Spanish Fort 10 with roughly seven seconds to go and was unable to stop the clock or run the field-goal unit on in time.

While the Bulldogs now face another huge test against Hueytown, Speakman made sure to say he, his coaches and his players needed to soak in Friday night’s win. Thomas was set to do just that after the game, though he made it clear he and his teammates understand the job’s not finished.

“[The message is] just keep winning,” Thomas said. “We love each other. Keep working hard. It ain’t over yet. Who’s next?”

The Opelika Bulldogs showed up ready to play Friday and took care of Spanish Fort to advance to the Class 6A quarterfinals.

Opelika’s Kaden Cooper (23) celebrates after his second touchdown carry of the night. Opelika vs Spanish Fort on Friday, November 12 in Opelika.