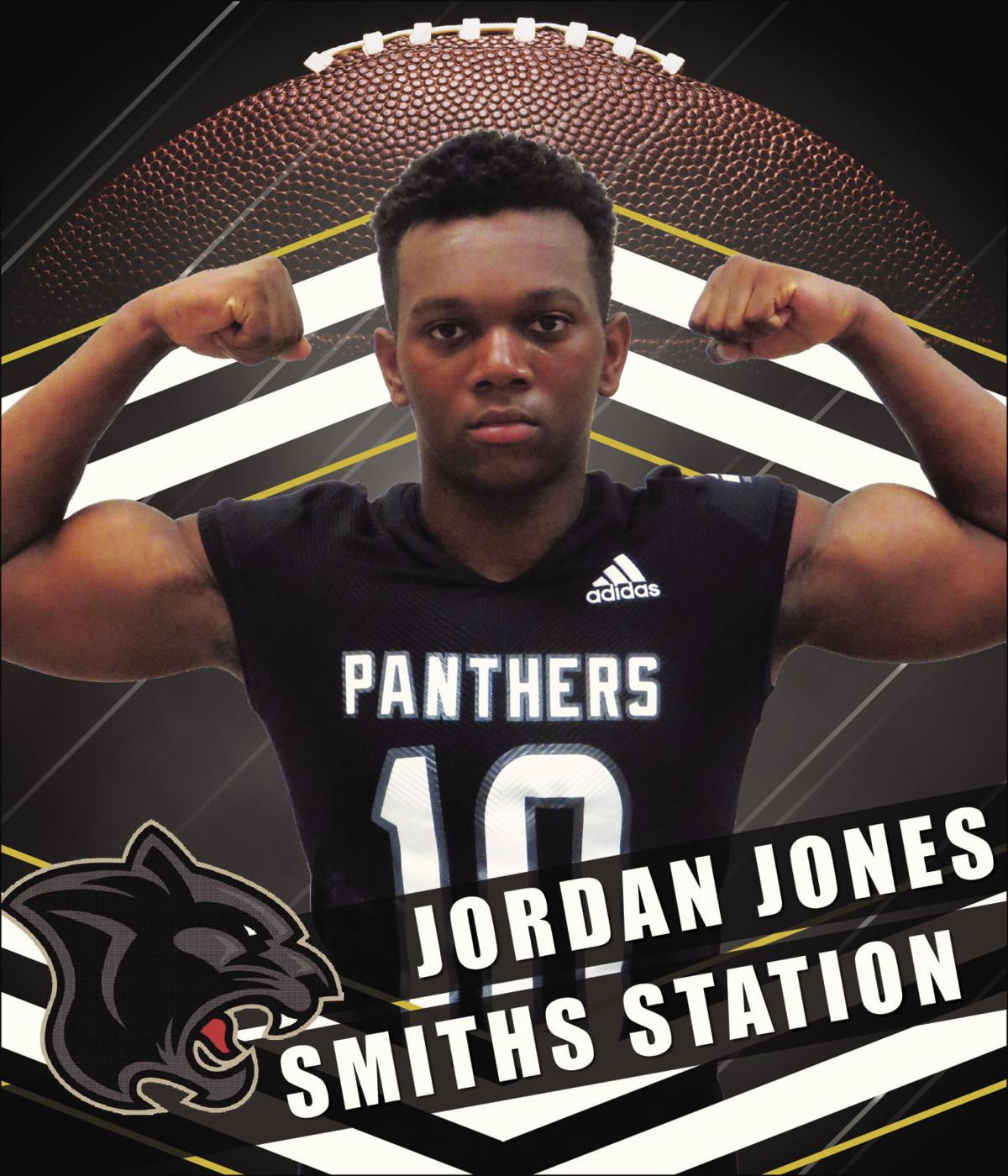 Smiths Station senior linebacker Jordan Jones is eager to register a 100-plus tackle season and lead the Panthers to the playoffs for the first time in seven years. 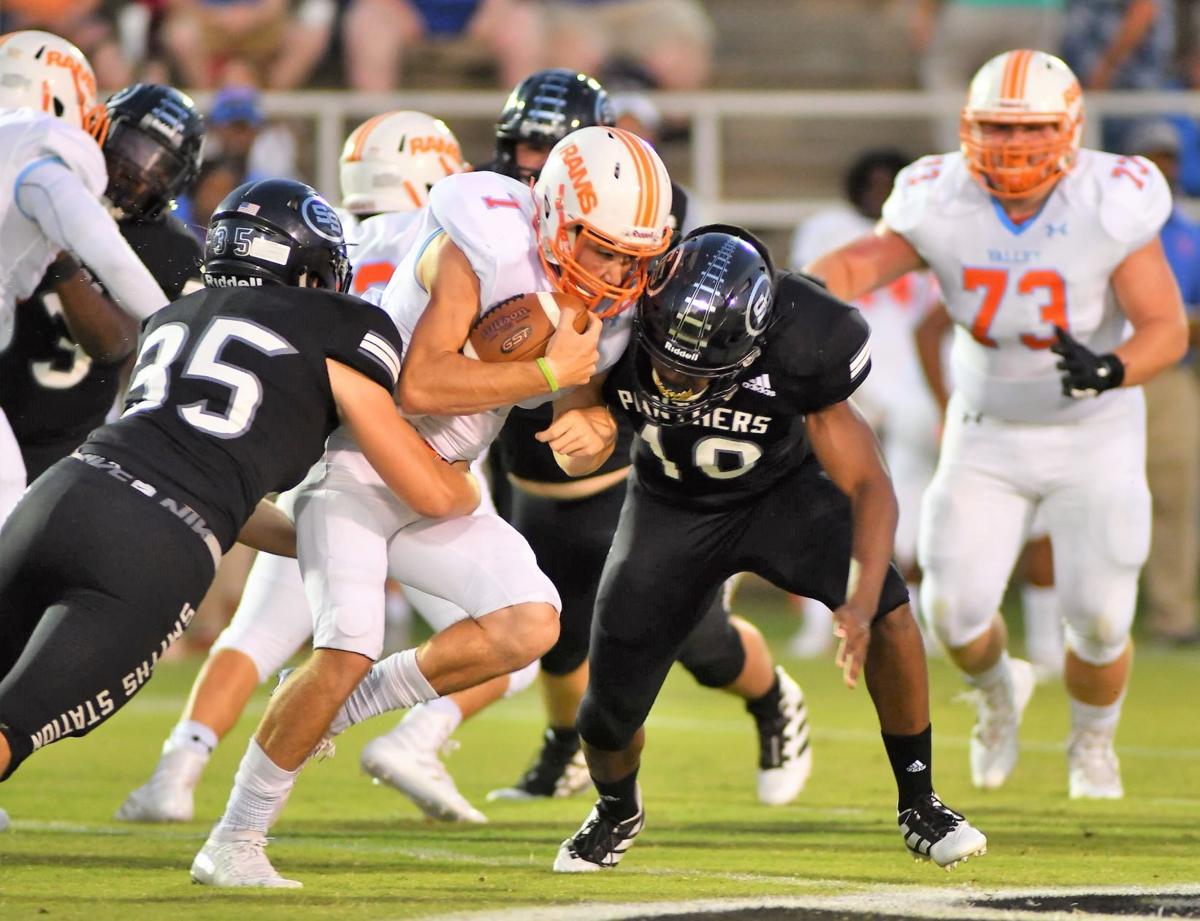 Smiths Station linebacker Jordan Jones (10) delivers a hit to Valley's Will Kennedy during a game on Aug. 30 in Smiths Station.

EDITOR’S NOTE: Leading up to the start of the high school football season, the Opelika-Auburn News will run features on this year’s Super 8 Seniors. Today: Smiths Station outside linebacker Jordan Jones.

Three years ago, Smiths Station’s Jordan Jones was an underweight freshman facing the tall order of playing middle linebacker in Alabama’s largest classification. Those daunting tasks were at times troublesome for Jones, but his perseverance throughout has helped him become an undeniably dangerous defender.

Jones never shied away from competition even when he was outmanned as a ninth-grader, and those days are now long, long behind him. The 6-foot-1, 210-pound linebacker has established himself as a mainstay on the Panthers’ defense, and his emergence as one of the area’s top players comes as he and his teammates look to put Smiths Station back on the map and back in the state playoffs.

Smiths Station head coach Mike Glisson arrived before Jones’ sophomore year, which was likely not a moment too soon for the budding linebacker.

Glisson, who has been a defensive-minded coach throughout his career, wasted little time in eyeing Jones as someone who the Panthers could rely on play after play. He proved it that fall with a strong campaign but took things to the next level in 2019 by recording 88 solo tackles, 10 assisted tackles, 28 tackles for loss and two sacks for the Panthers.

In Glisson’s opinion, Jones’ combination of athleticism and football IQ makes him the perfect storm for blowing up a play at a moment’s notice.

“I think that’s really going to highlight what he can do, and I think that may really boost his worth to the bigger schools that right now have not really come through with the offers. He can play there, and I think they’re fixing to see that.”

Jones’ combination of physicality and speed made him a must-have recruit for several schools, as UAB and Troy offered him last summer before Georgia State followed suit in April. Jones had 11 total scholarship offers when he committed to Georgia State in May, becoming the Panthers’ first commit in the class of 2021 in the process.

For Jones, the opportunity to go to Georgia State was too good to pass up. Plus, his decision to commit marked a milestone in a sport that Jones had second thoughts about even playing.

“Really it was when they were showing me around I loved the locker room and how big it was. I loved the campus. I liked the way it looked. He showed me the field, and the field’s really what caught me. He told me how it is in Atlanta and stuff like that,” Jones said. “I remember when I was younger — like in junior high — I really felt like football really wasn’t for me. I really felt like I wouldn’t get offers or anything, but I kind of wanted to stick with it just in case.

“I kept working hard, working hard and doing extra stuff at home every day. My dream finally came true. I kept praying, and God gave it to me.”

Glisson said Jones handled his move to the outside linebacker position like a champ. Jones welcomed the move, explaining it will allow him to show off his sideline-to-sideline motor that has earned him so much praise in the past. Jones said his favorite part of playing on defense is surprising a ball carrier with a tackle, something he’s made a consistent habit of doing throughout his career.

Jones has lofty goals for himself and his team this season, saying he wants to record over 100 tackles and that he wants the team to win the state championship. Both achievements would be worthwhile ones for a Smiths Station team that hasn’t made the playoffs since 2013, but Jones isn’t willing to let up in his pursuit of making them come true.

Jones has made a habit of bullying ball carriers in one of Alabama’s toughest regions for three years now, and he doesn’t anticipate the status quo changing this time around. With his eyes set on his upcoming senior season, Jones had some words of warning to anyone who tries to slip past him this fall.

“Keep your head on a swivel because I’m going to be coming after you,” Jones said.

Smiths Station senior linebacker Jordan Jones is eager to register a 100-plus tackle season and lead the Panthers to the playoffs for the first time in seven years.

Smiths Station linebacker Jordan Jones (10) delivers a hit to Valley's Will Kennedy during a game on Aug. 30 in Smiths Station.