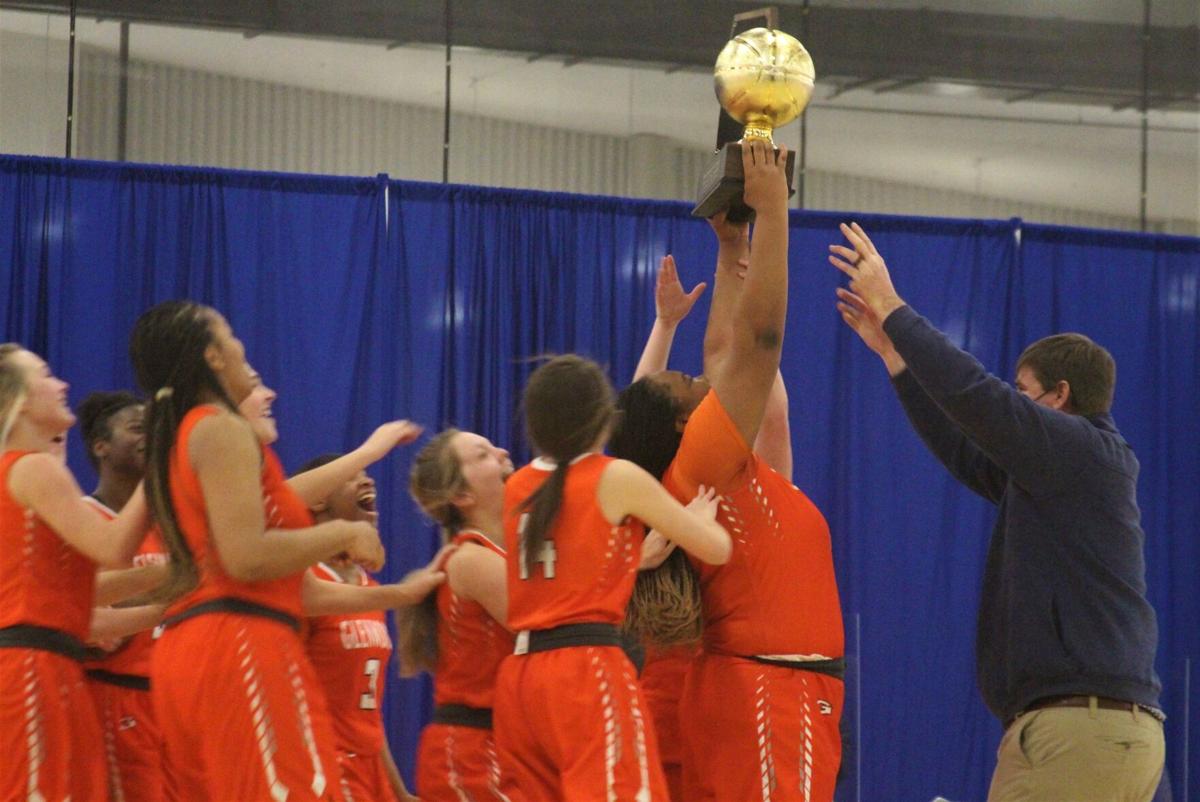 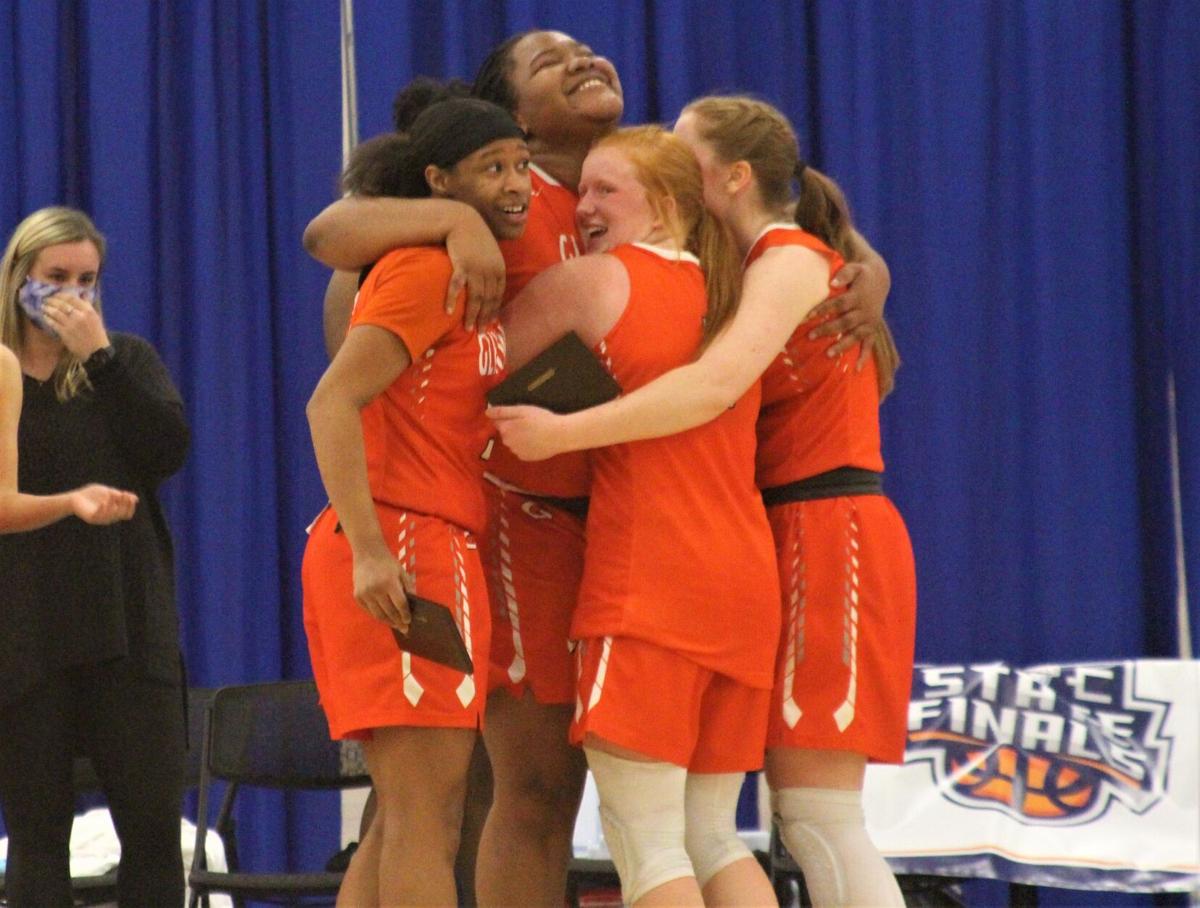 MONTGOMERY – The Glenwood Lady Gators entered Wednesday’s AISA Class AAA state title game with redemption on their minds after coming so close to a title the last four years.

Thanks in part to the play of Payton Corbett and Jasmyn Burts, the Lady Gators had plenty to celebrate once the final buzzer sounded.

Corbett stepped up after Burts got in early foul trouble in Wednesday’s game against Clarke Prep to help Glenwood keep pace, and Burts finished strong with eight fourth-quarter points to power the Lady Gators to a 40-27 victory. Burts’ play late was pivotal as part of a period in which Glenwood held Clarke Prep to only four points.

Thanks to the victory, Glenwood has its eighth state title in program history and its first since 2017. The win comes after the Lady Gators played for the championship in 2020 and in 2018 but came up short both times.

“It feels really great,” said Corbett, who had a game-high 17 points in the victory along with three rebounds and four steals. “Last year we made it all the way to the state championship, and we got blown out. Ever since then we've said 'We want redemption,' and since day one we've worked hard. I'm very proud of us. We've worked out butts off.”

Corbett had done her part to generate offense early on against Clarke Prep, but entering the fourth quarter Glenwood held a slim four-point lead. That’s when Corbett and Burts worked together to totally take the game over.

Burts left the game with 5:53 to go in the second quarter following her third foul, but she came back better than ever by hitting a jumper with 6:24 left in the game to stretch Glenwood’s lead to six. She came back nearly 30 seconds later and delivered another jumper, which left Clarke Prep down 31-23.

Burts had gotten herself into a rhythm, and she wasn’t going to stop shooting at that point. Clarke Prep was still looking for its first basket of the final quarter when Burts came through with a layup with 3:33 left to create a 10-point lead.

Burts explained afterward that she was a bit flustered by her early foul trouble but kept her focus as she looked to help Glenwood win it all.

“It was very frustrating, but I had to keep my composure. I kind of got thrown off a little bit, but I stayed in it,” said Burts, who had 12 points to go with three rebounds, two assists and two steals. “I wanted to help win, so I didn't want to throw myself out of the game or nothing like that.”

Burts delivered one of her two assists nearly 30 seconds later by finding Mya Brooks, who battled through an ankle injury earlier in the game and came up big in this moment with a layup. Burts added one more layup herself before Clarke Prep’s Maggie Childs delivered a bucket with 1:52 to go, but once again Burts got the last laugh with a steal and a layup to push Glenwood’s lead back to double digits.

From there, Corbett helped close the book on Clarke Prep with free throws. Glenwood milked the clock effectively, and the celebration was on.

Burts, Corbett and Macie Fanning were named to the all-tournament team for Glenwood.

The Lady Gators quickly made their way to the state title trophy, but Brooks was first to get a hold of the prized possession.

Brooks felt déjà vu Wednesday after she suffered an ankle injury just like she did against Lee-Scott Academy in last year’s title game, but the senior wasn’t throwing in the towel in her last game. She came off the court briefly before coming back and recording nine points; after the game, holding the trophy helped make her injury an afterthought.

“I know me and my teammates have worked hard to get to where we're at now, and coach [Dusty] Perdue has pushed us to be our best every single practice and every single day. It's good to have a good feeling about ending the season with a win,” Brooks said. “[My ankle] hurts really bad, but it was just the thought of 'Not two years in a row. You've got to keep going. Just win it. You'll have another break later. You've got to keep going.'”

Glenwood’s strong fourth quarter followed a slow three quarters by both teams in which baskets were hard to come by.

Glenwood lost an early first-quarter lead and then was hampered by Burts’ brief departure, but Corbett kept Glenwood in the game thanks to six first-half points. Clarke Prep’s Grace Davis helped push the offense to a seven-point third quarter, but Fanning and the Glenwood defense locked things down to make sure points became a premium the rest of the way.

That determination by Glenwood in the defensive end paid off. When it was all said and done, Clarke Prep only had 11 second-half points.

Wednesday offered a new experience for Burts, who came to Glenwood from Central-Phenix City, and for Perdue, who took over the girls basketball team in addition to coaching Glenwood’s boys.

The victory also featured a welcomed change of pace for Glenwood’s five seniors, who had been on the cusp of winning it all several times only to come up short.

Corbett was one of the biggest contributors all season among the seniors, and Wednesday was no different. She said she didn’t panic when Burts left the game in foul trouble, explaining she’s always known she’s the team’s second point guard and that she understood this was her time to step up.

Corbett was crucial in keeping Glenwood in the game, and when Burts returned to the action late the duo helped put Clarke Prep away.

Corbett said it was hard to describe what it was like when the state trophy came back to the Glenwood huddle, although she knew it was nothing short of satisfying for herself and the rest of the Lady Gators.

“I've been at Glenwood for four years, and this is my third time out of four years being in the state championship. We had lost two out of three years, so finally to get redemption and win, I just have mixed emotions,” Corbett said. “I'm so proud of my team.”

The Lanett girls got the better of LaFayette on Thursday, as the Panthers surged ahead in the third quarter then held off a late Lady Bulldogs’ rally to secure a 53-47 victory.

"We are going to build this program to be something that those boys and this community are going to be proud of. I can guarantee it."

Antonial Ware and the Notasulga Blue Devils simply could not be stopped in the second half as Notasulga dominated in a 69-51 victory to push the team to the Class 1A state semis.

The Smiths Station boys fell to Fairhope 79-49 in the Class 7A regional first round thanks in part to a big night by Fairhope’s Riley Leonard, who dropped 30 points in the victory.