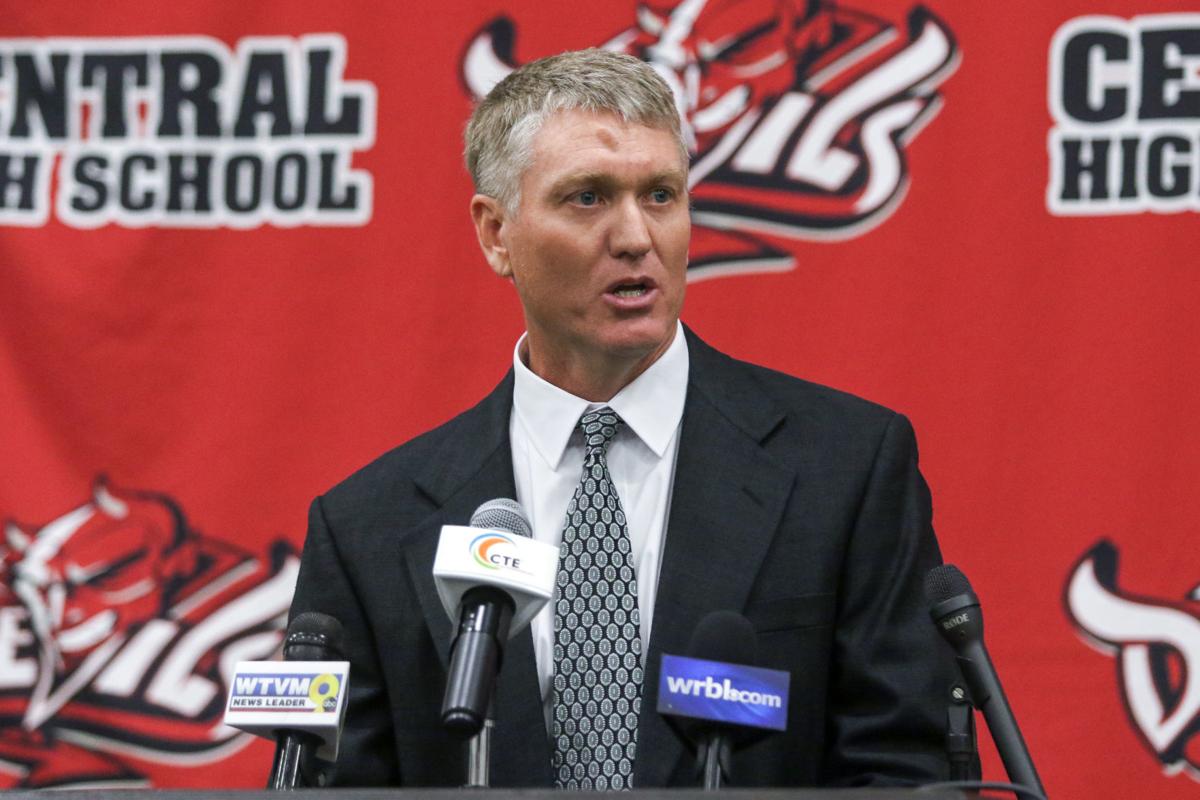 Patrick Nix is introduced as the Central-Phenix City head football coach at press conference in Phenix City on Jan. 14. The Former Auburn quarterback coached at Pinson Valley for three years prior to taking the Central Phenix-City job. 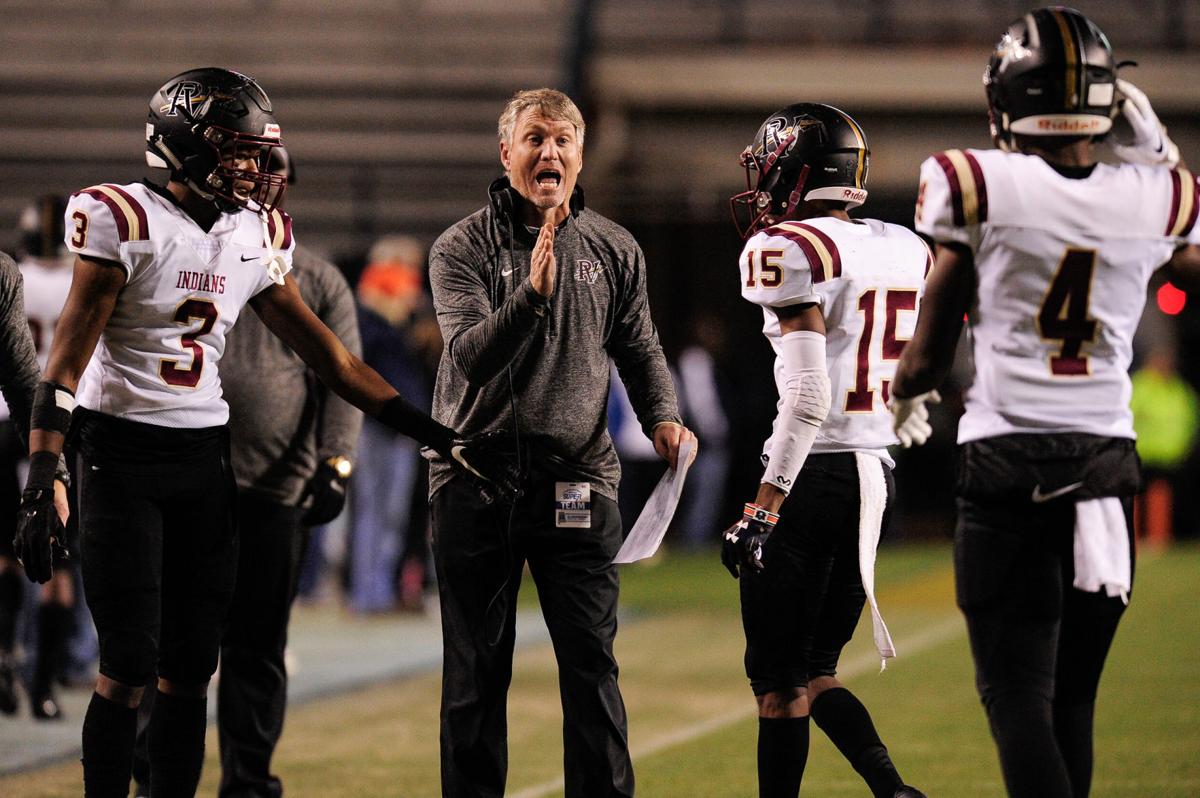 When Patrick Nix was hired as Central-Phenix City’s football coach in January, he stepped in with a plan to have the Red Devils rolling through his first offseason at the helm.

That plan, suffice to say, has been subject to several audibles since then.

Nix is one of countless coaches who have been planning on the fly during the coronavirus pandemic, but he’s also part of a smaller subset who are doing so with a program new to them. Despite the challenge of getting to know a team comprised of more than 100 players without in-person interactions, Nix and his assistants keep pushing forward in an attempt to make the most of a totally unusual situation.

“Thank goodness I had two months with the guys before we were shut down and sent home. There were a couple other key hires who had already gotten on campus and had a chance to work with the guys. With that part of it, we were very fortunate to have some time to get to know the guys and for them to get to know us,” Nix said. “Obviously, this is a different time for everybody. I don’t know that it’s necessarily put us at a disadvantage or an advantage. We’re no different than everybody else with trying to be creative, trying to teach our kids, to stay in contact with our kids and continuing to have relationships with our kids.

“Us new coaches, we’ve been able to lean on (the retained assistants) a lot in getting to know the kids. We’re still able to meet with (the players) through different computer meetings — Google Classrooms, Google Meets and everything else. We’re still able to have some face-to-face with them, which has been good.”

Nix had been at Central for roughly two months when the pandemic started, which luckily allowed him and his new team to get some important offseason work done. Nix was pleased with the way the Red Devils were handling the transition from former coach Jamey DuBose, and he felt the players were beginning to understand his expectations as they worked in the weight room and also went through running and agility-focused drills.

When the coronavirus outbreak started and players were sent home, Nix realized he and his coaches were in a favorable situation given the Phenix City School System’s preparedness. Nix pointed out students in the system had chromebooks to work with, and teachers had already been using digital-learning methods such as Google Classroom.

When it first became apparent that learning from home was a possibility, Nix and the rest of the staff began planning.

“I think we were a little bit ahead of the curve from what we could have been. Straight out of the gate, we were already meeting with our kids through virtual meetings and things like that and getting them information through our Google Classrooms. We were pretty fortunate that our school system had the foresight to have all that already in place and be ready to go once it happened,” Nix said. “Quite honestly, we didn’t miss a whole lot there at first. We were already jumping on, meeting with our guys and doing all our installations just in case we did come back toward the end of school so we would be ready to practice and ready to get on the field.

“Obviously now with it being extended the way it has been, we’ve had to get a little bit more creative with what we’re doing with them, whether it be watching video, how we’re doing our meetings or any of that kind of stuff we’re using to teach them and keep them active.”

Last Friday would have been Central’s fourth spring practice, but given the stay-at-home situation the coaches have instead been conducting virtual practices. The idea is simple: the coaches have shown the players what a typical practice looks like in order to teach them and to set the expectations for whenever real practices resume.

Additionally, the Central coaches have passed along workouts for the players, most of which have centered around body weight, agility and running given that not every player has access to weights.

Staying in shape and not falling behind are certainly important factors to Nix, but they’re not his primary concerns right now. Instead, Nix stressed how important it is to keep the players engaged for fear they might not come back to school once it resumes.

“I think most of the educators out there — at least from my perspective — our biggest fear is losing these kids. I’m just one of those guys where I think about the kids with every decision that’s made,” Nix said. “You just hope that they don’t just drop out of school now that they haven’t been there and we just kind of lose them in society. Unfortunately, without extracurricular activities, football, band or whatever it may be, a lot of these kids don’t really have a whole lot. You can lose them very quickly if we’re not careful.

“I think we’re trying to do our little part of just keeping our kids engaged, active and with us the best we can to make sure we don’t lose them in the long run so to speak.”

Nix’s message to his players is not unlike one he would give during the regular season. He said he’s emphasized to his new team the importance of controlling their own destiny, which in this case is about the players having good attitudes and continuing to work and learn despite the distractions.

Nix won two state championships while at Pinson Valley, and the expectations are set for similar results in Phenix City. While his intent right now is keeping every member of the Central football team engaged during the pandemic, he is eager for the team to reunite once the time is right.

“I’m very excited to have that opportunity once they do clear us and let us get back together.”

Patrick Nix is introduced as the Central-Phenix City head football coach at press conference in Phenix City on Jan. 14. The Former Auburn quarterback coached at Pinson Valley for three years prior to taking the Central Phenix-City job.