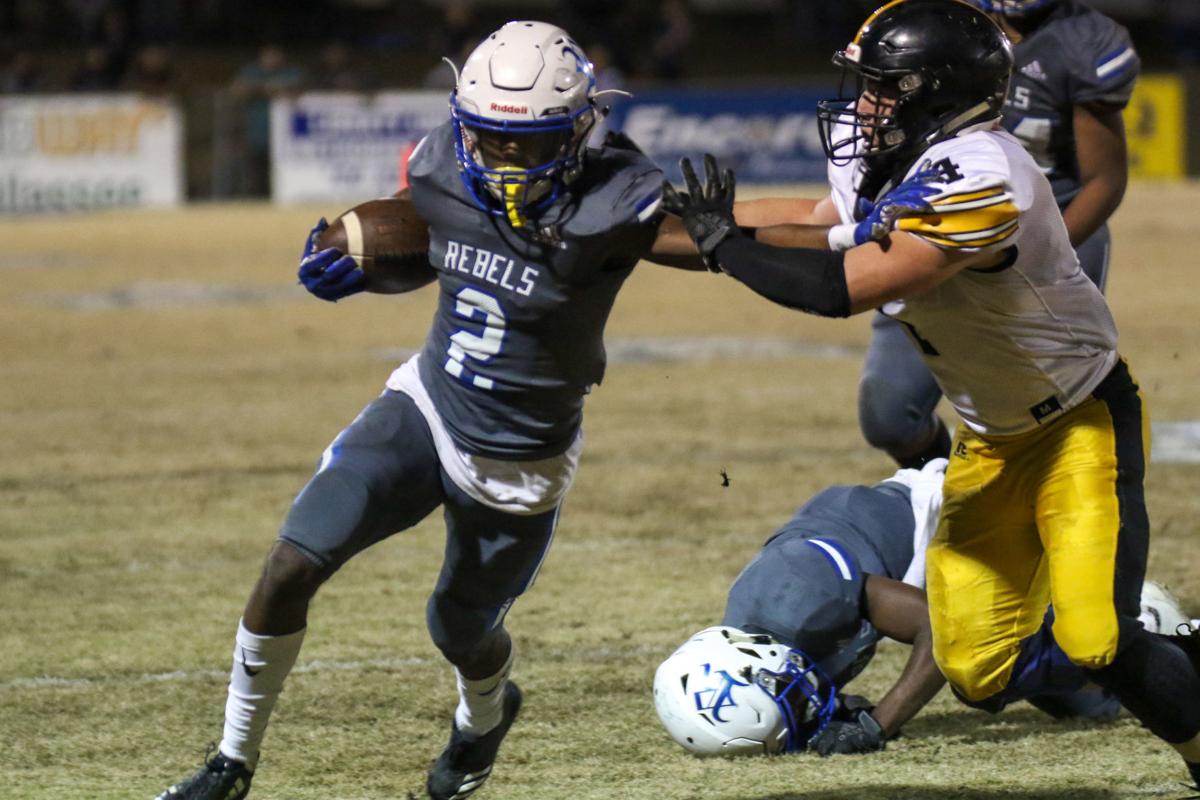 Reeltown running back Cameron Faison (2) stiff-arms Leroy's Hunter Weaver (4) during the Reeltown vs. Leroy Class 2A semifinal football game in Reeltown on Friday. 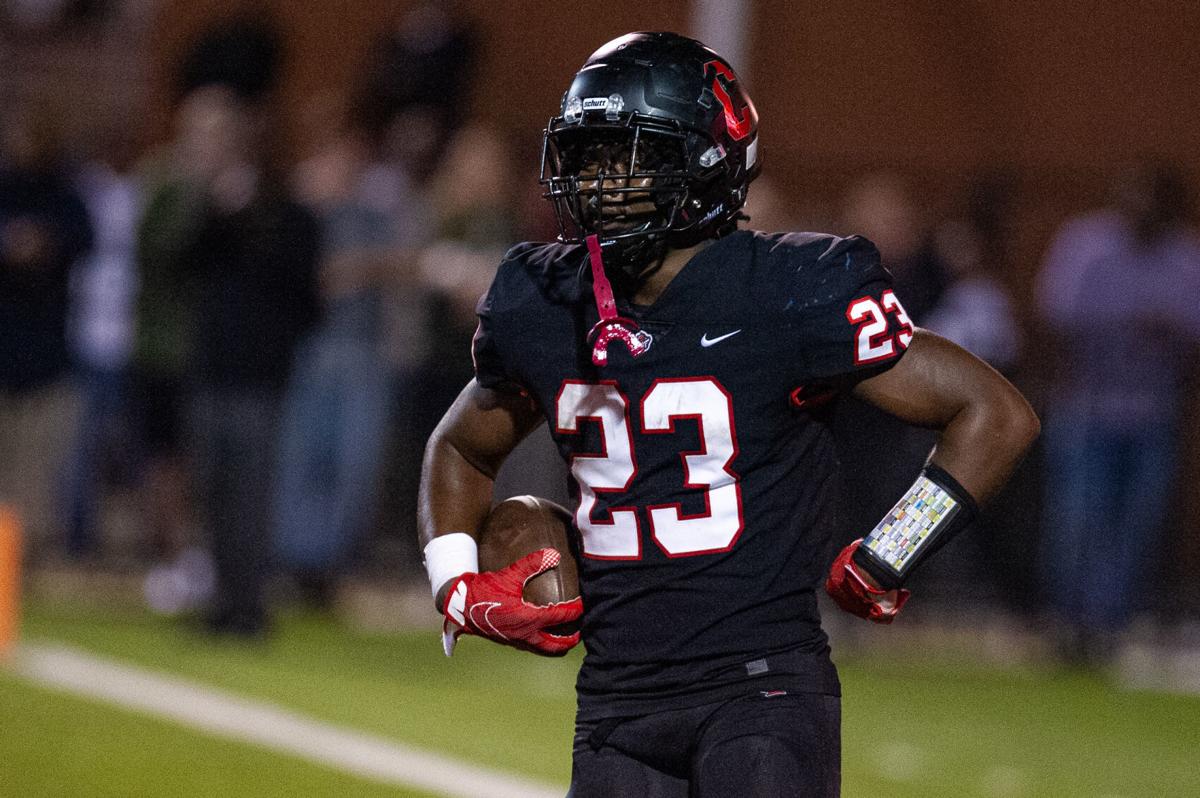 Central-Phenix City's Joseph McKay (23) poses in the back of the end zone after rushing for a touchdown in the second half. Central vs Auburn on Friday, Nov. 22 in Phenix City.

Since taking over as Reeltown head coach, Matt Johnson’s main goal has been getting the Rebels back to being one of Class 2A’s top programs. On Friday, Johnson’s Rebels showed they are in fact one of the classification’s premier teams.

Reeltown came out on top in an instant classic Friday by beating Leroy 29-28 in overtime. The Rebels got by the Bears by going for two in the extra session, with Reeltown running back Cameron Faison taking the carry into the end zone for the game-winning play.

Reeltown enters Friday’s Class 2A state title game against Fyffe with a 13-1 record, the team’s best mark in Johnson’s fourth season at the helm of his alma mater. As the celebration began Friday, Johnson struggled to put into words what the win meant to him and the Rebels’ program.

“I don’t think it’s possible,” Johnson said. “(The players) deserve it. There’s no doubt about it. They’ve worked their tails off to this point, and they deserve every bit of it.”

The emotions were understandably high after the Rebels’ win, which sends the team to the title game for the first time in nine years. As special as the moment was for the head coach, it was even more meaningful for the players, who have seen countless hours of hard work lead to a trip to Jordan-Hare Stadium.

“I about cried,” Reeltown quarterback Iverson Hooks said. “Me and Cam, we’ve been talking about this since summer. To actually go to the championship with my seniors, that’s a big feeling.”

As much as Lanett’s 2017 state championship still means to quarterback Kristian Story, there’s no doubt he is eager to add one more title to his collection as a senior. On Friday against Sweet Water, Story and his teammates showed they have what it takes to make that happen.

The Panthers had their hands full at Sweet Water on Friday, but Story’s team made enough play to edge out the Bulldogs 42-35 in the Class 1A semifinals. Story once again stood out for Lanett, as the Alabama commit had five touchdowns — including the go-ahead score on a 47-yard pass to Larontavious Hurston with 38 seconds to go — to send Lanett to the state title game for the second time in three years.

His middle son’s efforts came as no surprise to Lanett head coach Clifford Story, and as a result the Panthers have a game against Mars Hill Bible on Thursday to get ready for.

Best of the Bulldogs

Friday’s ride back from Spanish Fort for the Opelika Bulldogs was likely one all involved want to forget, but it came after the end of a season worth remembering for the team.

Opelika tore through the regular season outside of a loss to Central-Phenix City — which will play for the Class 7A state title for the second straight year on Wednesday — and continued its run in the postseason with impressive victories over McAdory, St. Paul’s and Hueytown. The Bulldogs were in contention to move on to the state title game on Friday, but the game slipped away in the final minutes to leave the team with a bitter 27-24 loss.

Opelika’s 25-man senior class came up as freshman on a Bulldogs’ team that reached the state championship and left on a squad that was one of the top in Class 6A. Although the team fell two wins short of the ultimate goal, Opelika head coach Erik Speakman made it clear they had plenty to still smile about.

“(I’ll tell them) to be very proud of what they accomplished,” Speakman said. “To get to the semifinals is such a tough thing. People don’t realize how hard it is to make a run at this thing. These seniors did a great job of leading our team and getting us to this point.”

For the last two years, Central-Phenix City head coach Jamey DuBose has emphasized building as tough a schedule as possible for his team. Based on where the team stands now, the veteran head coach has followed through on that objective.

The Red Devils’ path back to the Super 7 was packed with high-caliber teams, which is evident when you look at the final numbers. Central’s opponents this year posted a 60-40 overall record in the regular season, with two teams reaching the quarterfinals in their respective classifications and two making it to the semifinals.

A third team, Cedar Grove in Georgia, will play in the state’s Class AAA semifinals Friday with a chance to go even further.

“(Our team) made it through it and had a remarkable record. I'm very pleased to be a part of it.”

Last season, the Central ended the year by blowing out Thompson 52-7 in the Class 7A state title game. Although the Red Devils have the same opponent in this year’s championship game, DuBose is making sure his players put the past behind them.

In the lead-up to Wednesday night’s game, DuBose has emphasized to his players that last year’s beatdown of the Warriors means absolutely nothing this time around. He said the one-sided nature of the contest was not indicative of the team Thompson had, and if Central isn’t careful, it could be on the wrong side of a blowout this time around.

“We make sure we explain that to our kids. We explain it in turns of it that would have been us last year, what would be your mentality right now?” DuBose said. “Let's say Hoover got in the game. What would your mentality be right now to go to this game? We'd be totally like, 'Hey, we want that shot. We want that moment. They got us last time.' We've put them on the other end and make them realize this is what you're going to get now.”

Reeltown running back Cameron Faison (2) stiff-arms Leroy's Hunter Weaver (4) during the Reeltown vs. Leroy Class 2A semifinal football game in Reeltown on Friday.

Central-Phenix City's Joseph McKay (23) poses in the back of the end zone after rushing for a touchdown in the second half. Central vs Auburn on Friday, Nov. 22 in Phenix City.