Watch now: Opelika’s Rakavius Chambers ready to make noise at Duke in senior year
0 comments
Share this
Only $3 for 13 weeks
1 of 2 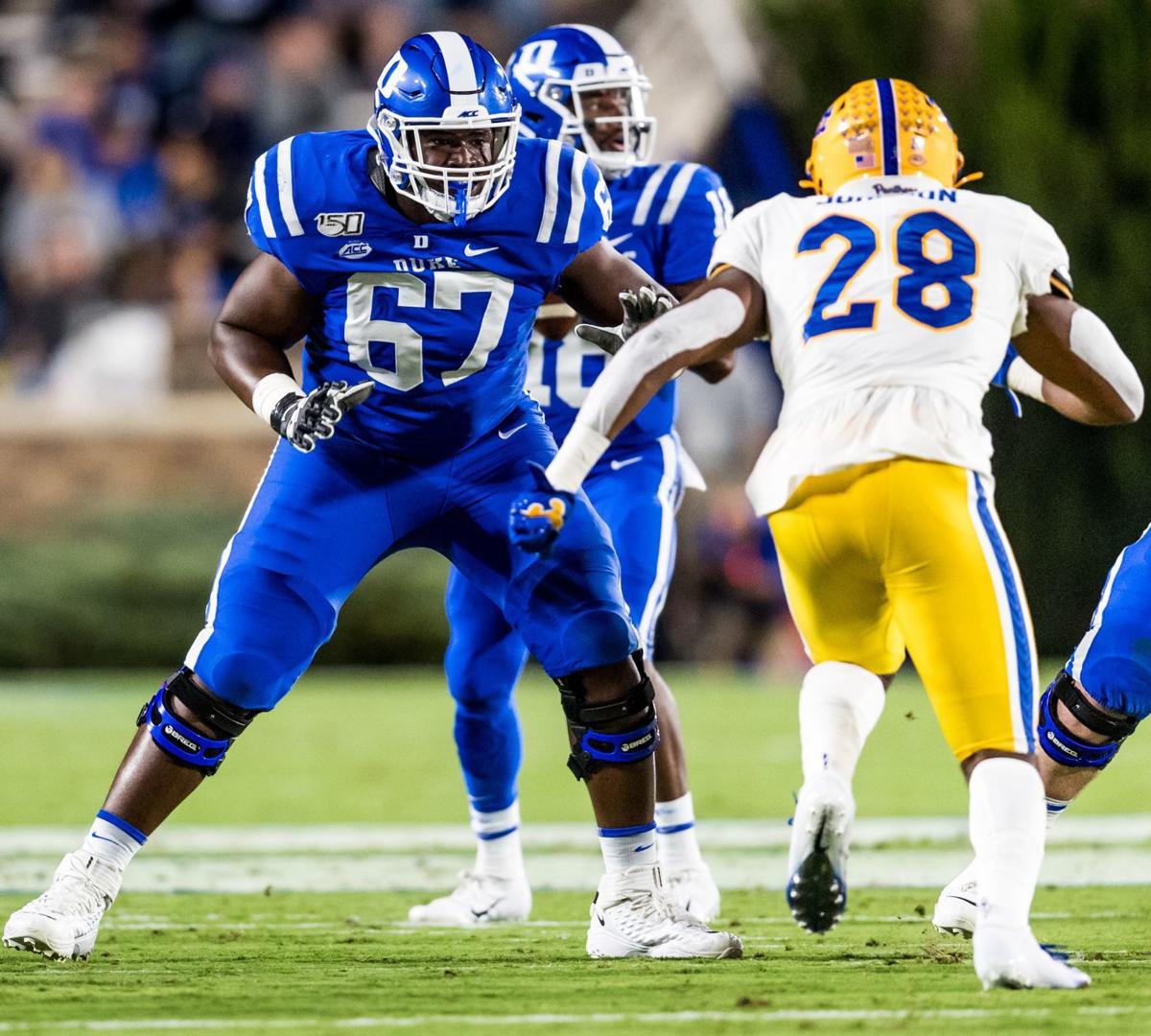 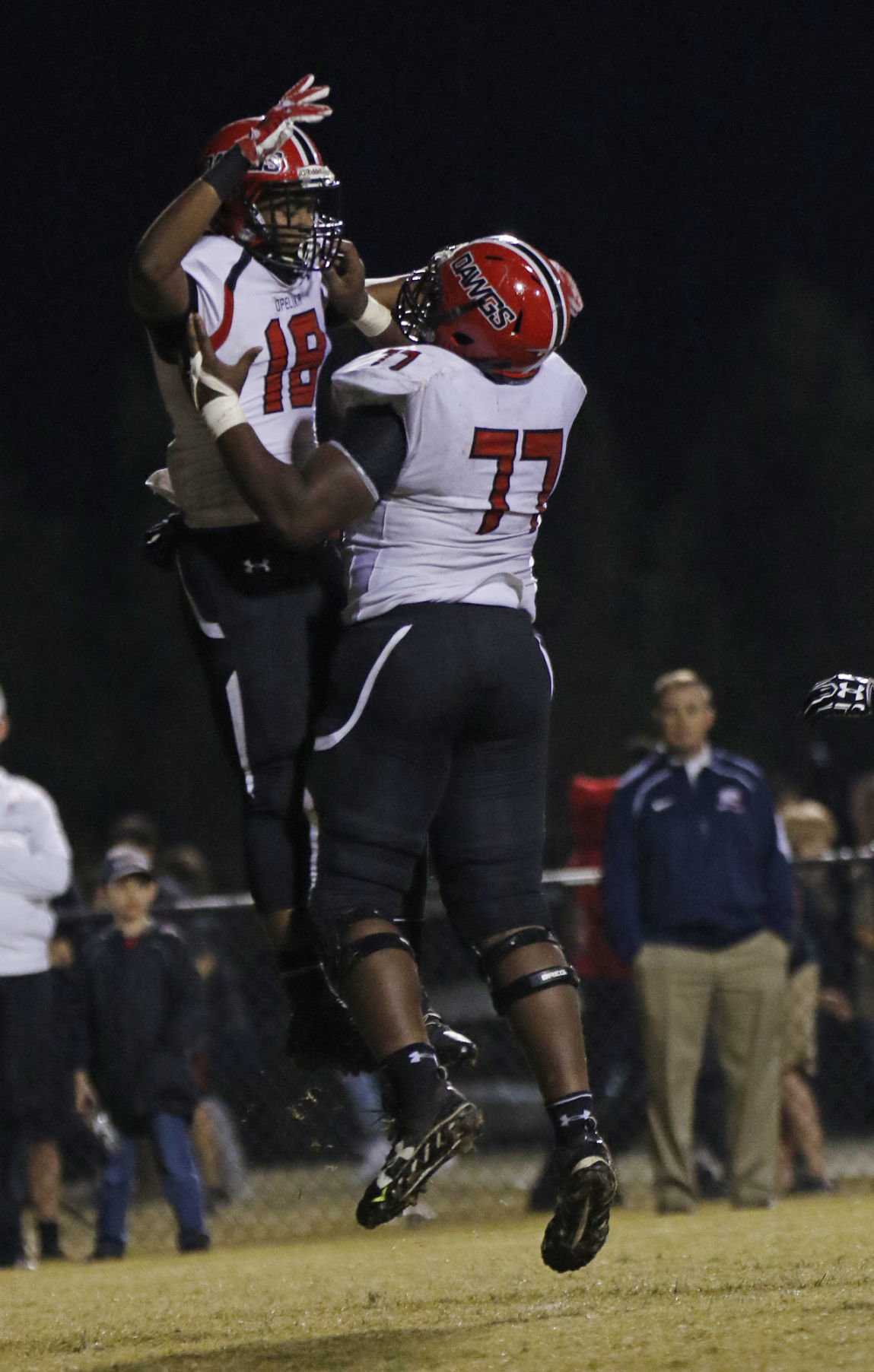 Editor’s note: This is the latest in a series of stories catching up with former high school football stars from the Opelika-Auburn area as they prepare for another season at the collegiate level. Today’s story features Opelika alum Rakavius Chambers.

Entering his junior year at Duke, former Opelika football player Rakavius Chambers had quite the challenge ahead of him.

Chambers and the Blue Devils were starting the 2019 season with a bang by facing No. 2 Alabama in Atlanta on Aug. 31. Not only did Chambers have to go up against one of the deepest defensive lines in the nation, but he’d be doing so as part of an offensive line featuring a true freshman right tackle in Jacob Monk and a redshirt freshman left tackle in Casey Holman.

Despite the daunting task ahead of him, Chambers — who is Duke’s starting right guard — didn’t flinch at the prospect of battling some of the best defenders in the entire country. In fact, Chambers said getting to face the Crimson Tide was part of what drew him to the Blue Devils in the first place.

“That game was one of the reasons why I came to Duke originally. I think that the challenge of going against a great defense like that was really good for our team,” Chambers said. “I think we came together in the offseason knowing that we would face Alabama and we would face their defense. That was something that really helped us throughout the entire season.”

Facing off the Crimson Tide to open the year was just one of the many obstacles thrown Chambers’ way in 2019, but as usual he played his part to try and help the Blue Devils stay in contention. With the calendar now turned to 2020, Chambers is eagerly anticipating the arrival of his senior season and another chance to put Duke on the map.

“Last season was a really, really good season for us. I think we really worked well together as an offense and came together although we lost some players the season before. It was a good season for us, and I think we gelled really well,” Chambers said. “I’m pumped (about 2020). I feel like we have a great team. I think with our new offensive setup combined with our defense that has been stellar in the past we’re going to shake up the ACC.”

The Blue Devils came up short in the season opener against an uber-talented Crimson Tide team, but Chambers said he was proud of his efforts against so many NFL-caliber players. Chambers and his teammates didn’t let that loss linger long, as they ripped off three-straight wins after that — including a 45-10 victory over Virginia Tech.

After a tough 33-30 loss to Pitt, Duke bounced back the next week with a commanding 41-23 win to improve to 4-2 on the season. The six games to start the season were monumental for Chambers and his fellow starting offensive linemen as they gelled together as a unit and learned what it took to play together.

For Chambers, the key was communication and all five linemen getting on the same page.

“With the offensive line, you have to become brothers. It’s one unit that’s fighting together. From that entire offseason, we were able to really gel, become brothers and connect more with each other. That really helped us,” Chambers said. “When it came to communication and making sure everyone understood plays, those guys are just workers and great players. They want to be great. When it came to learning play calls and learning how to communicate and what to do, they were all ears. They were open for it. I think they embraced the challenge.”

The Blue Devils’ hot start to the year took a turn midway through the year as the team experienced a five-game losing streak to end their postseason hopes. The team turned things around in a 27-17 Senior Night victory over Miami (Fla.), a game that Chambers said was the highlight of the season given how important it was to send the graduating class out as winners.

By season’s end, Chambers had been on the field for 867 snaps, started 12 games and paved the way for a Blue Devils offense that ranked 15th nationally in tackles for loss allowed. His efforts helped the entire Duke line make the midseason honor roll for the Joe Moore Award given to the most outstanding offensive line unit in college football, and they earned him candidacy for the Outland Trophy, the award given to the nation’s top interior lineman by the Football Writers Association of America.

After three years, Chambers has appeared in 38 games with 25 starts and played in 2,126 snaps. In his opinion, his durability is a product of his upbringing as well as the Blue Devils’ coaching staff.

Chambers was a part of some special moments at Opelika — including beating rival Auburn High 28-0 as a senior and helping the Bulldogs reach the Class 6A state title game that season — and now another Opelika product is Durham bound.

The Blue Devils signed Opelika defensive back Jaylen Stinson as part of the team’s Class of 2020. Chambers said he didn’t really know Stinson in high school outside of being on the track team with him, but he’s eager for another Bulldog to get to Duke soon.

“I did track my senior year of high school, and that’s where I first met him. He was the fastest person — one of the fastest people I’ve ever seen and one of the best all-around athletes that I’ve ever seen,” Chambers said. “I think he got second place in the javelin at state this year or something like that, so that’s incredible. I’m pumped. I feel like this Duke-Opelika pipeline is flourishing, and I love it. I’m just glad to be a part of it.”

Chambers has spent the offseason hard at work and said his focus has been making sure he has the best footwork possible for his senior year. With team workouts on hiatus during the pandemic, he said he’s also been watching a lot of film to correct errors from 2019 and to make sure he’s ready for each and every front a defense throws at him this season.

Chambers, like most college football players, is eager to be reunited with his team and for the group to set their sights on the upcoming season. Duke just narrowly missed making its seventh bowl game in eight seasons last fall, and as far as Chambers is concerned, the Blue Devils are ready to make up for that and then some in 2020.

“I can’t wait to show everyone how Duke has been preparing, how we’ve been working and just see the product that’s going to be given to the world on Saturdays,” Chambers said. “I hope everyone is ready because we’re coming to shock the world.”

A look at the 6 new local head football coaches

Adam Hunter’s promotion at Valley on Wednesday capped off what was a wild carousel of coaching teams among our local schools this spring.

Editor’s note: This is the latest in a series of stories catching up with former high school football stars from the Opelika-Auburn area as th…

Beauregard’s Eston Harris gets SEC offer as his first

Over the last decade, the Central-Phenix City Red Devils have established themselves as one of Alabama’s elite programs. As a result, the squa…

Father’s Day just another chance to celebrate for Nix family

When Father’s Day rolls around on Sunday, Central-Phenix City football coach Patrick Nix and his family plan on treating it like any other sum…